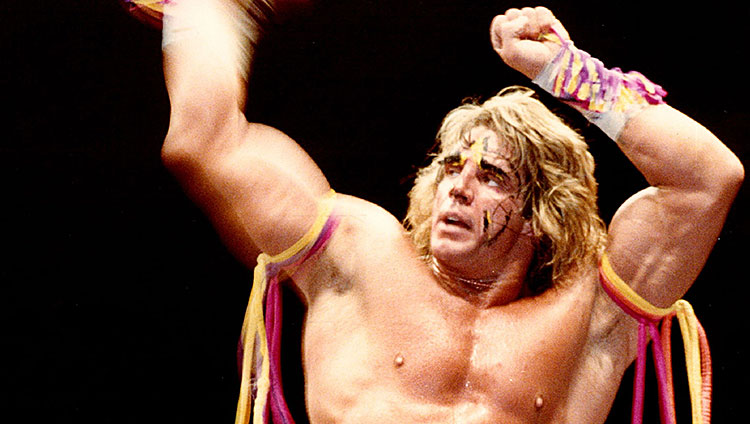 The Ultimate Warrior, one of the biggest stars in professional wrestling history, died Tuesday, just days after being inducted into the WWE Hall of Fame. He was 54 years old.

On Saturday night I scribbled down so many of the WWE Hall of Fame induction speeches, but with the Ultimate Warrior there was no point. Not because his rambling, 30-minute apologia was indecipherable, but because it was somehow strangely compelling. Here is what I scribbled down as he spoke:

As a performer he challenged the WWF higher-ups and earned one of the most infamous adjectives in the wrestling business — “unreliable.” He was concerned, above all else, with defending his reputation. WWE released a DVD of his career in 2005, titled The Self-Destruction of the Ultimate Warrior, that tried to piece together Warrior’s bizarre story.

At the Hall of Fame, he was intent on telling the world that he wasn’t the bad person they’d painted him to be. (And WWE seemed to be following suit; it released a new DVD, The Ultimate Warrior: The Ultimate Collection, Vol. 1, at the beginning of April.) As much as he reveled in his dissident persona in the ’90s and 2000s (both in the ring and online, where his harsh videos about other wrestlers and his offbeat political rants circulated among fans), he desperately wanted to be welcomed back. It was a familiar scene — every old wrestler rails against WWE and then rushes back into its arms.

The Ultimate Warrior’s persona was about individuality, defiance, and seemingly proud self-reliance. But even Warrior wanted to return to the fold. The only way to relish one’s past glory — to have 75,000 people chant your name, as they did at WrestleMania on Sunday — is to do it under the auspices of WWE. By all accounts, Warrior was happy to be back home. “There’s not a day that goes by that I don’t think about the business,” he said at the Hall of Fame. “The work was magic. It’s awesome to be bigger than life, to go out and be a character that people believe in.”

Tuesday night, Warrior died outside an Arizona hotel while walking with his wife. He had just signed a contract be an ambassador for WWE. The company released the following statement:

WWE is shocked and deeply saddened to learn of the passing of one of the most iconic WWE Superstars ever, The Ultimate Warrior. Warrior began his WWE career in 1987 and quickly went on to become one of the biggest stars in WWE history. Warrior became WWE Champion at WrestleMania VI, defeating Hulk Hogan in an epic encounter. We are grateful that just days ago, Warrior had the opportunity to take his rightful place in the WWE Hall of Fame and was also able to appear at WrestleMania 30 and Monday Night Raw to address his legions of fans. WWE sends its sincere condolences to Warrior’s family, friends and fans. Warrior was 54 and is survived by his wife Dana and his two daughters.

His legacy in WWE cannot be overstated. Despite not carrying the company, as Hulk Hogan did before him, his victory over the Hulkster at WrestleMania 6 signaled a legitimate changing of the guard. His nuclear charisma forced a shift away from the repetitive mythology of the Hulkamania era and into a grayer morality and a darker outlook. We relished in the neon paint, the arm tassels, the rippling muscles, and the antic ring entrances, but there was a deeper shift going on.

I wrote about Warrior in my book and on Deadspin. The subject was wrestler deaths, and Warrior wasn’t dead. But his death had been rumored for years, since 1991, when he first disappeared from the WWF and returned looking suspiciously different. It was the “Paul is dead” of pro wrestling. It didn’t help that his interviews were bizarrely obsessed with death. “I know that that warrior is ready to make that sacrifice so that I shall live,” he once said about a fan in his signature face paint.

On Monday at Raw, Warrior put the face paint back on. He came to the ring in a suit, but he put on an airbrushed duster coat and a mask that approximated the fluorescent shield in which he covered his face. Two nights before, at the Hall of Fame ceremony, he had been Jim Hellwig — real, sensitive person. That night he was the Ultimate Warrior in all his snorting, snarling glory. It was a revelation. For all the eye-rolling his return had elicited from wrestling fans who loved him as a kid, seeing him back in character made me realize how much I had missed him, how much he meant to me. The crowd went absolutely nuts.

“No WWE talent becomes a legend on their own,” he said. “Every man’s heart one day beats its final beat. His lungs breathe a final breath. And if what that man did in his life makes the blood pulse through the body of others, and makes them bleed deeper and something larger than life, then his essence, his spirit, will be immortalized. By the storytellers, by the loyalty, by the memory of those who honor him and make the running the man did live forever. You, you, you, you, you, you are the legend-makers of Ultimate Warrior.”

I knew then it was a moment I’d remember forever.

Curious George: The Collapse of the Pacers Star's Season