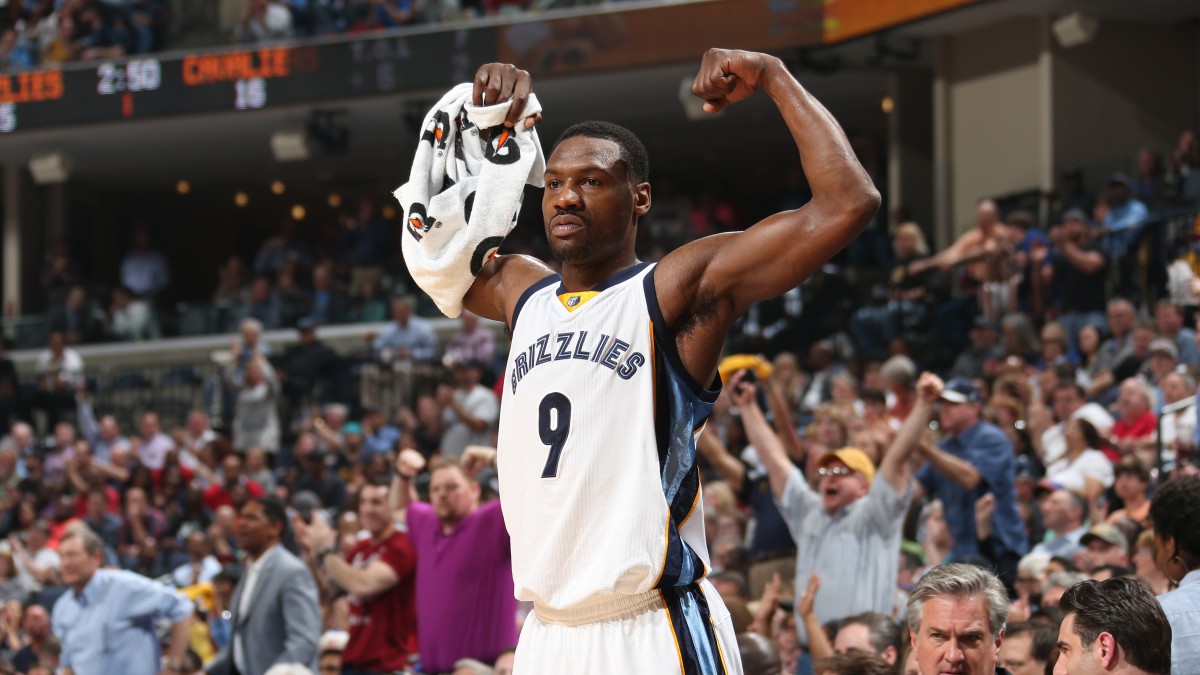 We all know what a relentless defender he is. But you almost get a better sense of what he means to the Grizzlies if you watch him when he’s not on the floor. On the bench, he works harder than most players do when they’re playing. He can’t stay in his seat; he’s constantly springing up and spreading his arms and bellowing at the crowd and generally acting like the hype man for the apocalypse. Then, after the game, in the press conference, he looks an eyelash away from comatose. His voice is a rasp. He’s sunk in on himself, like a cat that just blew through eight lives. He’s so spent that if a butterfly randomly landed on his shoulder (which could happen, because he’s Tony Allen) he might tip right out of his seat.

Not long before the Spurs lost their series to the Clippers in one of the best first-round playoff games ever, Gregg Popovich said something wise. He said: “In this situation, one of us goes to Houston1 and one of us goes on vacation. We’d each rather go to Houston, but vacation’s not terrible.” His point: Basketball is just a game. NBA players have cushy lives. Let’s not pretend losing is the end of the world. And that’s a healthy way to think about sports; it’s humane. I hope it’s how Allen thinks about sports sometimes. On his days off, maybe, or his birthday. During games, though? The options for Allen are not the next round or vacation. The options are the next round or … well, imagine the ending of every action movie ever made, only if the good guys screwed up.

Aliens bursting from the stomachs of tourists in Times Square. Skynet raining down destruction on Los Angeles. The villains in The Matrix doing … whatever it is those guys were trying to do. That’s the loop running in Allen’s mind every time his man gets the ball. He plays basketball at a permanent setting of yipee-ki-yay, motherfucker.

Last season, I had the chance to watch him from behind the Grizzlies’ bench in Memphis during their insane playoff series with my beloved Oklahoma City Thunder.2 What floored me about seeing him from close up was that he was completely — I mean completely — unselfconscious. He wasn’t hiding anything. He wasn’t worried about how the crowd saw him or how his opponents saw him or how his teammates saw him. And that’s something you say about people, right, that they don’t care what other people think of them, but how many people do you know of whom that’s really true? What Allen wanted was stamped on every expression on his face; you could feel the force of it almost physically. If you could help him realize it, then he was 5,000 percent your ally. If you couldn’t, you didn’t exist. He spent most of those two games guarding Kevin Durant, who’s at least five inches taller than he is and also, you know, Kevin Durant. And he was harrowing. He was willing to do anything to stop Durant. If he screwed up, mistimed a steal or fell down or whatever, he didn’t care about looking stupid. He wasn’t playing to impress you. He was playing to stop Durant, and he drove Durant nuts.3

None of this is new. Still, if he’s not blowing up like some rookie who keeps drilling buzzer-beaters, he’s at least looming larger in the NBA than he ever has before. You feel this, right? The way he’s saturating basketball Twitter? Consider two representative moments from the Grizzlies’ ongoing slugfest against the top-seeded Golden State Warriors; chances are you’ve seen them both 250 times already, but then, that’s part of the point. 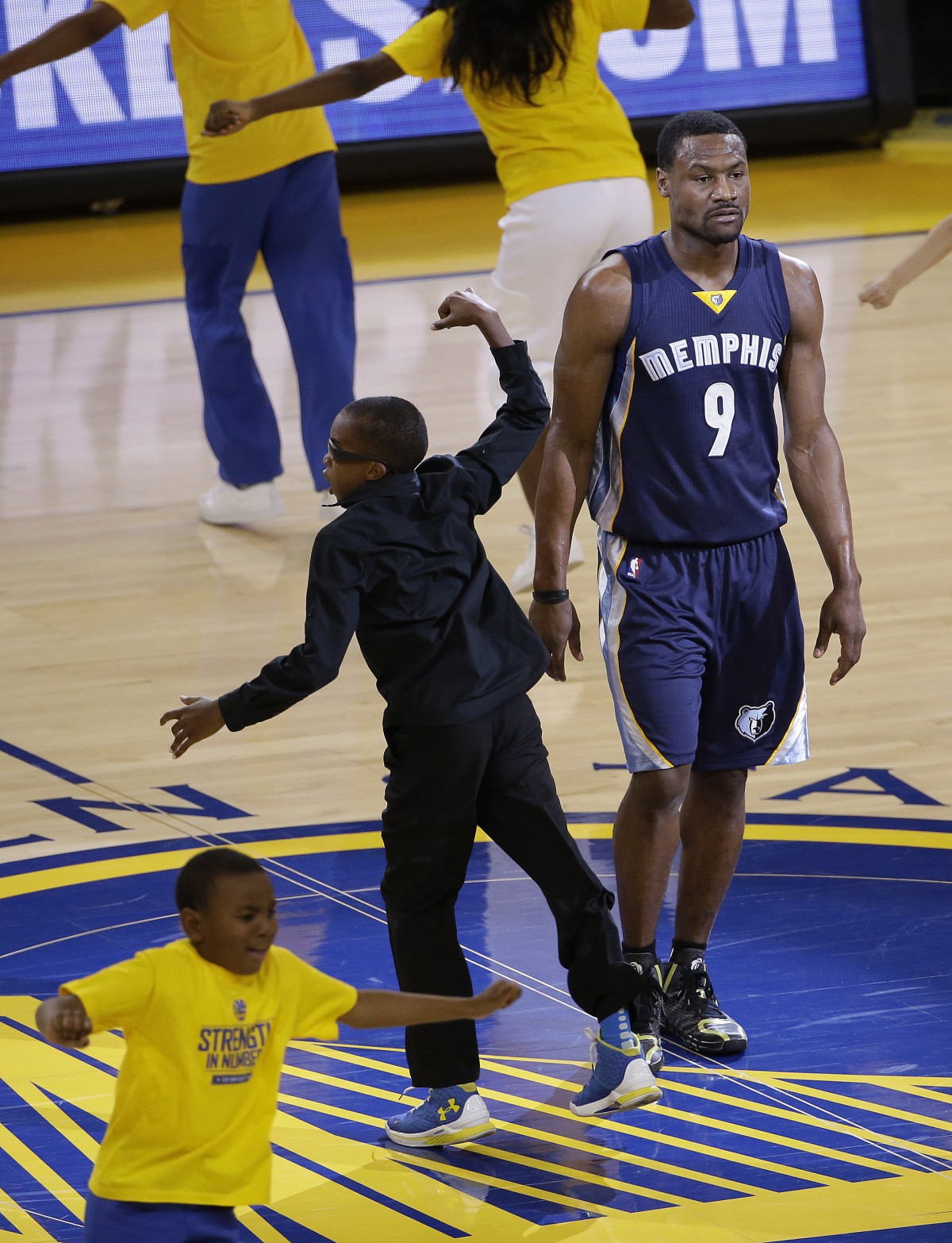 It’s halftime in Game 1, with the Grizzlies trailing 61-52. The halftime show in Oakland features the Warriors’ Jr. Jam Squad, a pint-size troupe of high-energy child dancers. They’ve done two weeks of boot camp for this, and now they’re there doing their tiny thing, shaking it like they don’t care, smiles aglow on their precious little faces, when …

Lumbering out of the sea toward your fragile, fragile skyline …

Warriors fans were furious, but watch the tape: He had no idea he was doing it. And the truth is, Allen wanders around at halftime all the time. He is so focused on getting back to basketball that he doesn’t see what’s in front of him. Even if that thing is a jazzy-legged ring of 7-year-olds sweetly breaking it down with all their might.

Allen wore a microphone for Game 2, which — I mean, is there some reason why we haven’t made this a permanent arrangement? Can the commissioner issue a mandate? Because take any game, I don’t care how good it is; now drop a miked-up Tony Allen into the middle of that game and ka-bang, it’s instantly 20 percent more entertaining. And that’s a conservative estimate.4

Again, he’s not a guy who creates highlights; making the ball go in the basket is probably the basketball skill he’s worst at. He’s not a physical freak-king like Anthony Davis. He’s not a silky shooter like Steph Curry. He’s not a feared leader like Kobe. He doesn’t make the game look easy. He spends most of his time guarding guys who are bigger, faster, and/or more agile than he is, and you can see the struggle every time he gets the better of them. He doesn’t win awards. Every team needs a player who does the little things, gives his all, and has his teammates’ backs. But those guys don’t usually captivate the basketball world’s imagination; the list of Fuck Yeah Jared Dudley Tumblrs was pretty small even when Fuck Yeah Tumblrs were a thing.5 Sure, Allen’s game resonates hugely in Memphis, a city that’s embraced the lunch-pail oddball nature of its wonderfully misfit team. But somehow, Allen has come to mean something to basketball fans in general despite having a game almost no one would want for themselves.

What Tony Allen does? It does not look fun. Murderous man-to-man defense, hyper-vigilant awareness of passing lanes, a willingness to chase your man from one end of the floor to the other, the tenacity to grind for 48 minutes against the other team’s best player … none of this looks remotely enjoyable. It’s all stuff you can take pride in, sure. It’s all stuff that matters. And again: Memphis. But the basketball fan’s dream song is “I Believe I Can Fly,” not “I Believe I Can Lay My Body on the Line to Impair the Other Team’s Offensive Efficiency.”

The chorus of jackhammers in Allen’s head is singing the second song. Look at him: He plays like rust attacking metal. And yet he makes his mastery of the game’s dark and in-between spaces look totally thrilling. He’s the glue guy as brain-shredding rock opera. 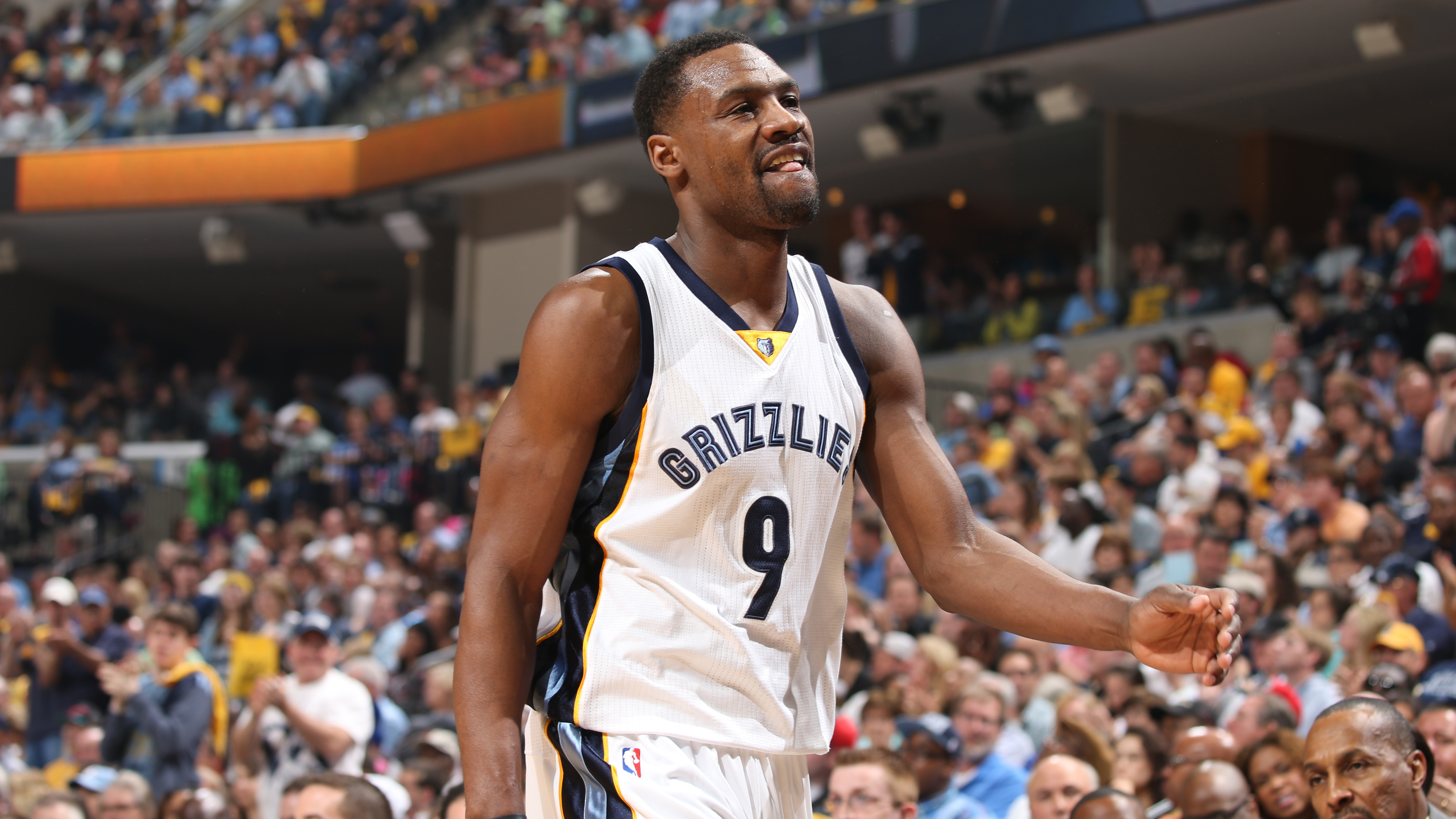 And you know what? With the exception of that astonishing Spurs-Clippers series, this year’s playoffs have been all about dark and in-between spaces. It’s not just that the series have been bad, it’s that they’ve been off-kilter. They’ve been jangling. They’ve been weird. All the Hack-a-Somebody games. All the games that have sailed past midnight on the East Coast because they couldn’t string together two consecutive possessions without the clock stopping. Atlanta and Houston both going numb at odd moments. Paul Pierce melting people’s brains with his mere presence, like a meaner version of the tape in Infinite Jest. These playoffs have been a perfect setting for every clanging, unglamorous, and hard-nosed skill the NBA offers. For everything, in other words, that makes Tony Allen great — the proof being that the harder everyone else has been to watch, the more entertaining he’s gotten.

He’s back in action tomorrow night, with his Grizzlies improbably tied 1-1 with the favored Warriors. They’re playing in Memphis, where he’s loved; being inside FedExForum is going to be like having a seat inside a jet engine for 150 minutes. He’ll feed off it. He’ll crash around like an in-control out-of-control garbage truck, with desire bordering on fanaticism and not an ounce of visible fear. We’ll love watching him, because of the complete transparency with which he shows us what he wants. And we’ll love watching him because of the insane effort with which he’ll go after it.

Welcome to Tony Allen’s playoffs. Every team needs a player like him. But then, who else ever could be?