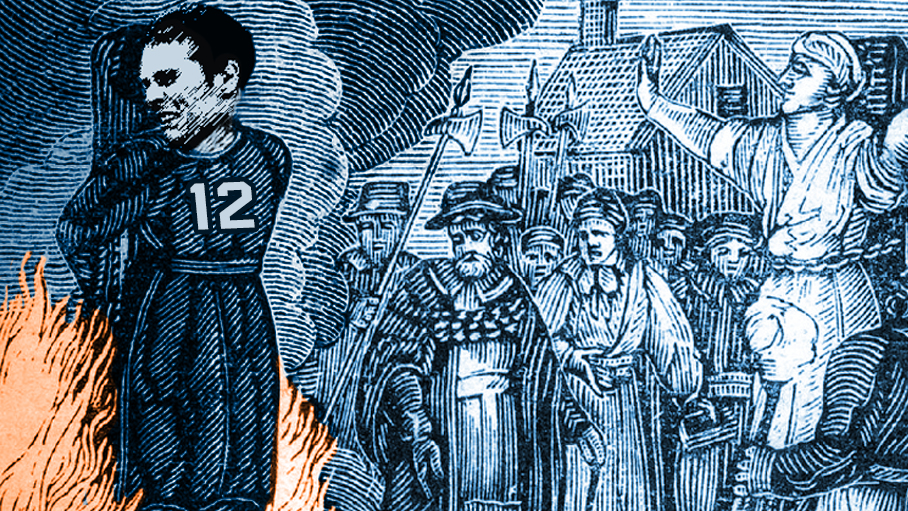 There had been a crime committed by people working for the President and the President said he did not inquire about it. He met with Ehrlichman. He did not ask. He met with Haldeman. He did not ask. Nixon maintained that it was not until nine months later, on March 21, 1973, that he first learned the facts of the Watergate break-in, learned them from John Dean. As Doar and Owen looked at the cards, small, sarcastic voices seemed to be everywhere:

Those voices — those small, sarcastic voices that Breslin was talking about — are the fundamental chorus beneath the preposterous national symphony of outrage now that the whole matter of the air pressure of the footballs used in last year’s AFC Championship Game is back in the news. Those voices are the evidence (or what amounts to it) that the Ted Wells report has against the Patriots generally, and against Tom Brady specifically. Those voices are the subtext for the thousands of words of burlesque moral panic that already have been expended over this profoundly trivial exercise in petty gamesmanship. Those voices are the countermelody to all the weepy violins of the professionally wounded. Those voices are the ones using actual respectable network and cable news as ventriloquist’s dummies. (Jesus, Steve Kornacki. There are approximately 988 people running for president now and Iowa isn’t that boring.) Those voices are the whispers behind that faceless slab of legalese, “more probable than not.”

But here’s the other thing: Those voices are rarely wrong. And I don’t believe they are wrong here.

Tom Brady’s meticulousness about the footballs he uses is so well known around Foxborough that the low-level staffers there joke about it while texting each other? Brady is so interested in the well being of one of the targets of the investigation that he calls him at least six times in the days after it all hits the fan? And yet Brady doesn’t have any idea what was going on, or who one of these guys even is? Cue the small, sarcastic voices.

It is my considered opinion that, ever since this whole exercise in manufactured Stupid began, Brady has been getting terrible advice from heaven and earth. His stunned-duck press conference back on January 22, the highlight of a truly surreal day, locked him into a categorical denial that looks even worse in retrospect. Almost nobody believed anything anyone from the Patriots said back then, and the only way to keep yourself sane at all was to remind yourself that this entire mishegas was over the amount of air present in the footballs used in the first half of a 45-7 game. But what Brady apparently missed was the remarkable way that his own coach ducked and let him take it in the chops.

“I think we all know that quarterbacks, kickers, specialists have certain preferences on footballs,” Bill Belichick had said earlier that day. “They know a lot more about it than I do. They’re a lot more sensitive to it than I am. I hear them comment on it from time to time, but I can tell you and they will tell you that there is never any sympathy whatsoever from me on that subject. Zero. Tom’s personal preferences on his footballs is something he can talk about in much better detail and information than I can possibly provide.”

I note now for the record that one of the few specific things about the Wells Report is that it specifically exonerates Belichick and the New England Patriots as an institution. But the fact is that Brady was being set up to take the fall right from the jump. Brady is usually a lot better than this at reading a blitz and eluding an attack from his blind side. Which is why his flat denial at that press conference was such a blunder. It was almost assuredly going to be undermined by events. Since then, almost nothing he’s done in his own defense — except, of course, winning the damn Super Bowl — has been helpful. There aren’t five people to whom I am not related that I like more than Tom Brady Sr. and I completely understand why he was trying to defend his son, and I admire him for it. But someone should have kept him off the Twitter machine this week. Don Yee, Brady’s often-elusive agent, lost his shit in a most unproductive way, ripping the Wells Report for being nonspecific while offering no specifics in his own rebuttal. And then there was the very strange appearance Brady made at Salem State College in Massachusetts on Thursday night. He had been scheduled as part of the school’s featured speakers program for months. He would be lobbed some softballs onstage by Jim Gray, with whom he has a regular satellite radio gig. Needless to say, events intervened.

First of all, the helicopter arrival was a terrible idea — bad optics at a time that Brady didn’t need bad optics. It didn’t come off as humble, shall we say? But the event itself was something between a night at an overcrowded sports bar and last call at a beachfront happy hour on Cape Cod. Gray and Brady used the first 10 minutes to dispose of the Wells Report.

I’ve dealt with a lot of things in the past … and I dealt with this three months ago before the Super Bowl. I’m very fortunate to have so many people that love me, support me. Certainly I accept my role and responsibility as a public figure. A lot of it you take the good with the bad. Dealing with the adversities in life, you do the best you can do. We’ll get through it.

And then he did the smartest thing he’s done since the Indianapolis Colts narced on him last January. He said he’d wait to see what the league does. But the voices were still there. 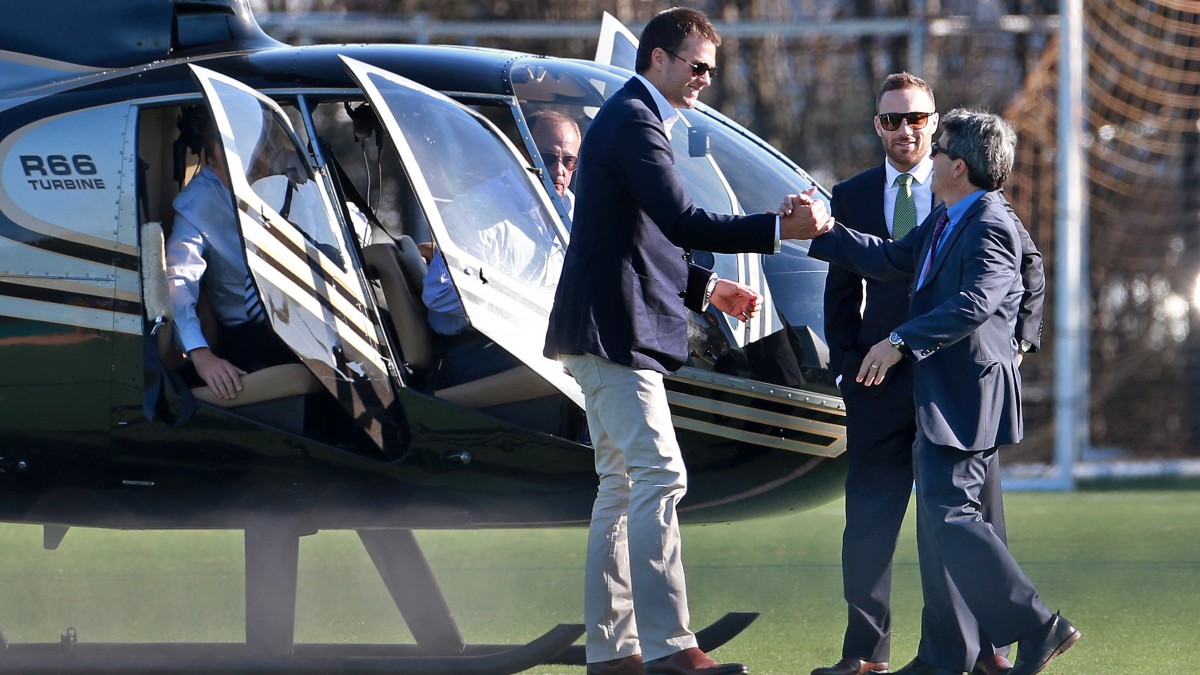 I will be accused of not being objective about Brady, because I wrote a book about him once, with which he neither cooperated nor interfered. Consequently, I got to interview practically everyone who’d been important in his life except him. This made the project and its subject even more fascinating. Since then, we’ve been passing acquaintances, usually in locker rooms. His father and I correspond occasionally. So, to get the obvious questions out of the way:

For some time, there has been something a bit off about Brady’s entourage, something that serves The Brand as much as it serves The Person. It had about it the unmistakable ambience of the small time. Brady — it seemed to me, anyway — was being treated by the people around him like one of those $1,500 claimers that suddenly wins the Kentucky Derby and makes the guys who bought him richer than they ever thought they would be. Without question, The Brand has made him rich. The Brand has made him famous. But, with his enthusiastic cooperation, The Brand set him up as a cartoon of underdog virtue, and that could not be sustained because he’s still a person and football is still football — a moral quagmire on its best day. And, faced with the first sustained damage that The Brand ever has suffered, the people around Brady give all the indications of defending The Brand at the expense of The Person.

He never should have given that January press conference. I don’t give a damn whether Edward R. Murrow had come from the dead to ask questions. He should have had no comment upon the release of the report and no comment Thursday night in Salem. His camp should have maintained radio silence until after the NFL levied its punishment. When that happens, I would almost guarantee that the NFL will overreact or Roger Goodell will step on his dick again, and Brady’s political position will be reinforced in the public mind by the fact that the public mind already thinks Goodell is a fool. But Brady seems to have been advised to preserve the cartoon of underdog virtue, as though that were what really needed protecting. I am glad that I got to know Tom Brady. I don’t even want to know The Brand.