The 25 Stages of Playoff OT Hockey 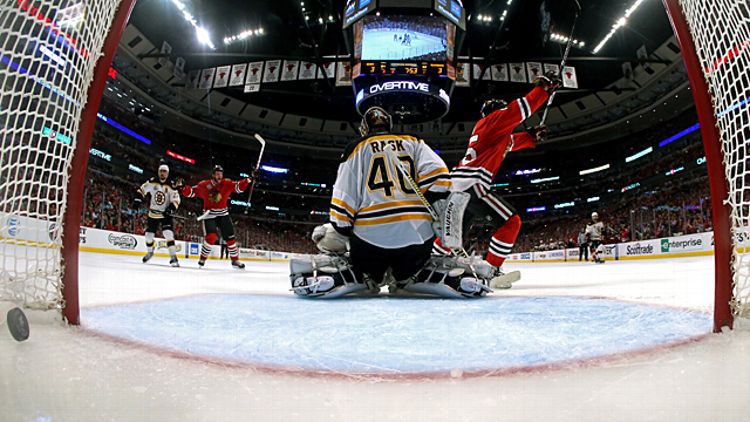 The Chicago Blackhawks and Boston Bruins needed a third overtime to decide Game 1 of their Stanley Cup final this week. It was the longest game of the 2013 playoffs. (The series picks up again Saturday night in Chicago.) Now it goes without saying that if you’re a fan of one of the teams involved, watching sudden-death overtime is torture. But if you’re a relatively neutral observer who wants to see an entertaining game, overtime is just about the best possible result. And the longer it drags on, the better.

But while you never know exactly how a long overtime game will turn out, veteran hockey fans should have a good idea of what to expect along the way. Here are 25 moments that you’ll probably experience at some point in every multiple-overtime NHL playoff game.

1. When the game is still in regulation, but the announcers start saying it already feels like overtime

An announcer claiming that it feels like we’re already in overtime has become a mandatory moment in any close hockey game. It’s especially entertaining when it’s said in an overly ominous way, with the announcer trying to sound like an old man surveying the horizon and warning of an approaching storm.

In a typical matchup, this moment will happen about five minutes into the third period. In a game between two especially defensive-minded teams, it might happen midway through the national anthems.

2. The one good scoring chance in the final minutes of regulation

At this stage, you’re already subconsciously rooting against both teams, because there’s nothing worse than getting to within a few seconds of overtime and then having someone go and ruin it. The hockey gods know this, and will make a point of throwing in one late scoring chance just to mess with you.

3. The intermission before the first OT

This intermission is polished and professional. After all, the network knew there would probably be an overtime game in this series at some point, and it is prepared.

There will be a panel discussion, a detailed breakdown of the highlights from the first three periods, and a look ahead at what each team will try to do in sudden death. The whole thing will end with a montage of all the previous overtime goals from that year’s playoffs, which will make you want to run outside and bench-press your car.

You will overreact to the first few scoring chances. This is normal. Remember to pace yourself.

5. The odd moment where you remember there are no commercials in overtime

Maybe this one applies only to me, but even after three decades of watching playoff overtime, I’m still caught off guard by it every time. It usually takes a few minutes for the realization to kick in, often accompanied by a growing sense of regret over the lack of bathroom breaks taken during intermission.

6. The game subtly shifts into “this could take awhile” mode

Conventional wisdom says that if a playoff overtime game doesn’t end within the first few minutes of sudden death, it’s going to go long. Once that threshold is crossed, you start having to consider the possibility that it could take hours.

Which inevitably leads to …

7. You make a deal with yourself

You’ll watch until the end of the first overtime, but that’s it. If it goes any further, you’ll just catch the highlights when you wake up. After all, you have to work tomorrow. It’s the responsible, adult thing to do.

8. The intermission before the second OT

This is a less polished version of the first OT intermission, since the announcers weren’t really expecting to have to do this again. The panel is still there, but they’re repeating some of the same points they made last time. They’re also showing highlights of different games to kill time. They look tired. You wonder if anyone remembered to feed them.

9. The near-miss by the team that will eventually lose

Every long overtime game will have at least one of these moments — on Wednesday, it was Kaspars Daugavins fumbling a backhand chance in front of an open net before tumbling into the corner.

These are the sort of plays that can haunt a player for the rest of his career and that fans of the losing team will have seared into their memories.

10. The near-miss by the team that will eventually win

Absolutely nobody will remember this play.

11. You make another deal with yourself

All right, you’ll watch until the end of the second overtime. But that’s definitely it. Also, you’ll skip your shower tomorrow to get some extra sleep. Your coworkers will understand.

12. The montage of big saves and near-misses that have happened so far

You usually get one of these per OT period. It’s the network’s way of filling some time while passive-aggressively reminding you that, yes, these guys really are trying to win. This is a good time to start secretly hating both goalies.

13. The intermission before the third OT

Madness descends. At least one member of the panel has clearly had way too much coffee, and two others appear to want to fight. They spend eight minutes on a highlight package that features two teams that didn’t even play each other and which appears just to be a recording of the demo mode in NHL 13. Stuff like this might start to happen.

14. Your spouse/significant other wanders into the room to make sure you didn’t die

They start to ask why you’re still up, see that the hockey game is on, roll their eyes, and go back to bed. Let them go. Hey, it’s not like you won’t have another anniversary next year.

15. The realization that sudden-death overtime is roughly a thousand times better than the shootout

Note: This stage does not apply if you are Gary Bettman.

16. The sudden development of a deep resentment for people who live on the West Coast

Wait, they get nice weather and they can watch playoff overtime without having to get up in three hours? Seriously, screw those guys.

17. You make yet another deal with yourself

OK, fine, you’ve come this far so you might as well just commit to watching the whole game, even if it means you miss work and get fired. But this is the last time you’re going to do this to yourself. Next game, you’re definitely going to bed at the end of regulation. Probably. Maybe.

18. Someone finally scores the winning goal

An underrated hockey tradition: the losing goalie who puts his head down and skates directly off the ice before the goal light has even turned off. Tuukka Rask did a great job on this one Wednesday night. He was almost Belfour-esque.

What do you get when you take 20 guys who are super-excited but also too tired to coordinate the movement of all their limbs and throw them into a big pile? Not much, actually, unless you like watching sweaty bearded dudes yell “WHOO!” in each other’s faces.

By the way, the highlight of any OT celebration comes when the winning team is so busy mobbing the goal scorer that they forget about their goaltender, who has to wander down the ice by himself looking for someone to interact with. It’s like watching an unpopular high school kid try to figure out which cafeteria table to eat lunch at.

Inevitably, the broadcast will cut away from the celebration pile in time to get a shot of the winning coach, who is calm and collected and projecting a serious “I knew that was going to happen” vibe. It’s very impressive, right up until they cut to a replay of the bench when the goal went in, and you see him momentarily lose his mind before quickly remembering to pretend that he’s not excited after all.

Bonus points if one of the assistant coaches tries to awkwardly high-five him.

22. All of the other reaction shots

Once we’ve seen the coach, we move on to shots of various other reactions. There’s the winning GM, the losing GM, both benches, an owner, an injured player, a guy who works at a concession stand … At some point, you begin to wonder exactly how many cameras they have in this building, and why they were all pointed at these people instead of the game.

It lasts roughly six seconds, and is hosted by somebody you’re pretty sure wasn’t even working for this network when the broadcast started.

You trudge into the bedroom that your spouse/significant other seems to have recently moved out of, flop into bed, and shut your eyes. You don’t bother looking at your clock because you’re not sure you even want to know what time it is. You are beyond exhausted.

25. You stay awake for the next two hours reliving the game