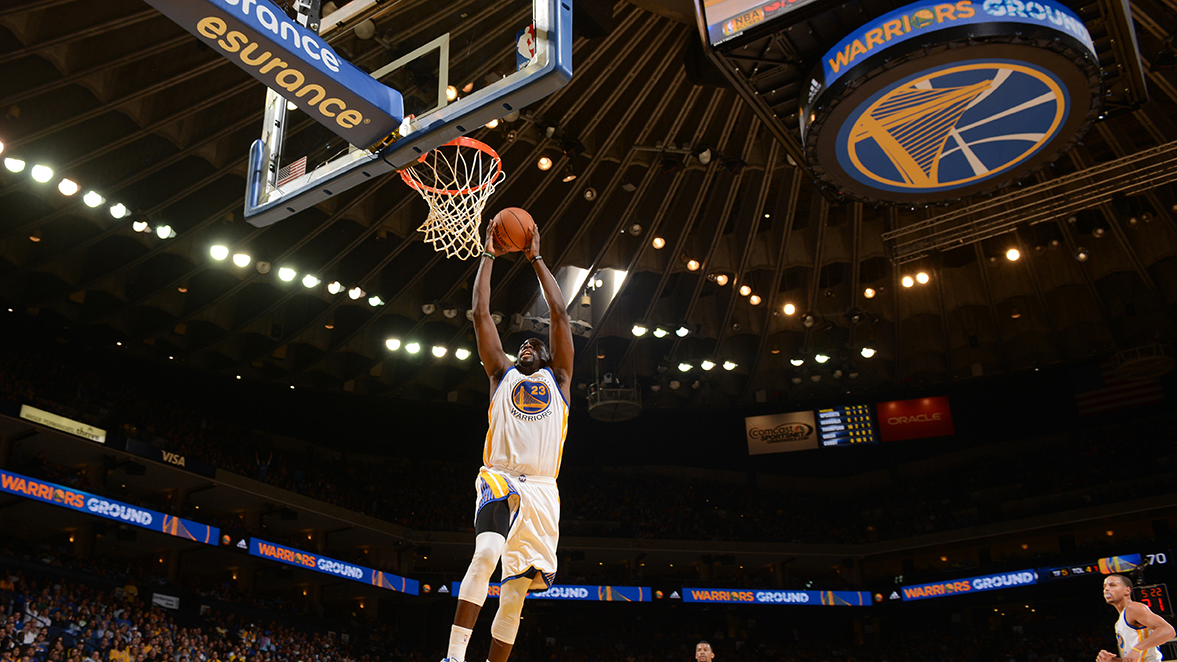 On December 6, the Golden State Warriors were in Chicago to take on the Bulls. They were down four early when Klay Thompson used a left-handed dribble to attack the paint from the top of the arc. Joakim Noah cheated off of his man — Draymond Green — to double Thompson and slow his drive. But Thompson was quick to notice; he stopped, spun around, and fired the ball to Green, who was left wide open behind the arc. Noah didn’t seem to care as Green rose up and calmly drained the Warriors’ first bucket of the night.

All night long, the Bulls were happy to concede those kinds of shots to Green. Their main focus was on stopping Thompson and Stephen Curry. This is not an unusual game plan, and as a result, Green sees these kinds of wide-open looks a lot. And as he told me last Thursday, in Oakland, it’s one of the spoils of setting screens for two of the most terrifying shooters in the league.

“One thing about basketball coaching is you have to identify something you’re willing to give up,” he says. “Steph Curry or Klay Thompson coming off a pick and shooting is not what anybody’s willing to give up.”

He made seven above-the-break 3s that night in Chicago. “I get that shot so much because I’m always on a pick play with Steph or Klay,” he says. “And people jump them all the time. I can’t blame them.”

Opponents might not be willing to leave Green open for much longer. 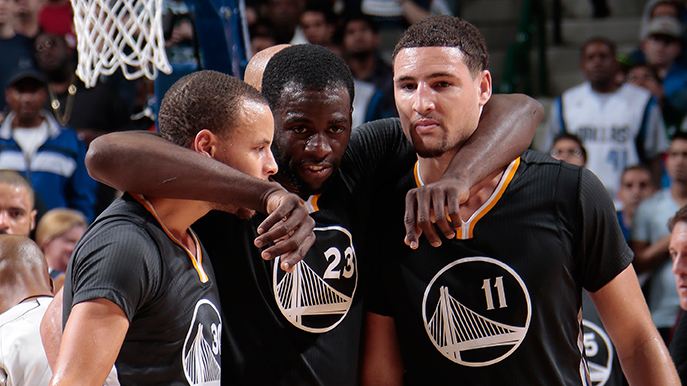 You could argue that Green is the “most improved” player in the NBA this year, but that overlooks a bigger truth: Green is always improving, and the only constant in his game has been its perpetual evolution. He is the best-case scenario for player development in the NBA, and a deeper look reveals that Draymond Green has been turning corners since his time at Saginaw High. 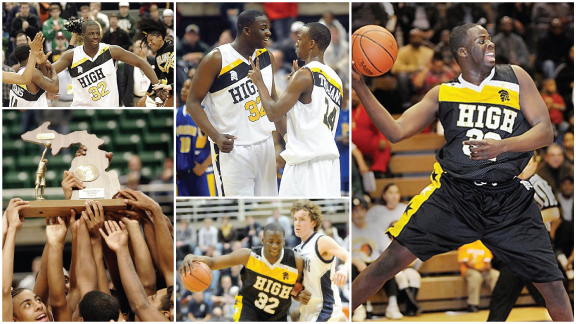 Green led the Saginaw Trojans to two consecutive Michigan High School championships. His game was unusually balanced, and he drew attention from some of the country’s biggest college basketball programs, most notably Kentucky and Michigan State. In the middle of his junior year, Green spurned his local school and committed to play college basketball under Tubby Smith at Kentucky.

But he would never actually attend Lexington. Just a month after he committed, Smith resigned, and Green promptly de-committed. In June 2007, he announced that he was taking his talents an hour down the road from Saginaw, to East Lansing. Seven years later, Green, who turned out to be the quintessential Spartan, is still baffled by that massive fork in his road to the NBA. “I always look back at that and wonder, Man, if Tubby didn’t leave Kentucky, where am I today? Michigan State means so much to my life and me. I just love Michigan State, and if [Smith] didn’t leave, I don’t know where’d I be right now.”

Green had a tough time in his freshman year at MSU. In an era when college freshmen are often the best players in NCAA basketball, Green was not ready for prime time. He struggled to earn playing time and his contributions were small.

Whereas dominating high school ball came relatively naturally to him, in the Big 10, he was just another freshman buried at the end of the bench.

At some point in his first year, Green realized he needed to change his habits in order to realize his goals. In short, he was physically unable to compete at a high level. He was overweight and kind of slow. “I always loved playing basketball. That was never a problem for me,” he says. “You want to go to the park or the gym, I’ll play with you all day, but working out, I didn’t love. I hated it.”

It took pressure from Izzo and Green’s teammates to press him to work harder in practice and in the weight room. “At Michigan State, Coach Izzo and his staff, that’s all they preach … All of a sudden, by the end of my sophomore year, I’m a gym rat,” he says. “That’s what really changed my game and propelled me to a different level.”

Green’s metamorphosis in East Lansing was remarkable. He went from being a relatively forgettable freshman at the end of the bench to one of the team’s most iconic players since Magic Johnson. Like Johnson, he won both Big 10 and national honors and, also like Johnson, he ran the offense as a triple-double threat every night. To date, only three players have recorded at least two triple doubles in the NCAA tournament: Oscar Robertson, Magic Johnson, and Draymond Green. Pretty good for a pudgy power forward from Saginaw.

By senior day in March 2012, when it was time to kiss midcourt again, Green was a very different player than he was when he arrived on campus.

Despite his dramatic development and all of his individual accolades, unlike Johnson, Green wouldn’t run the table in March, and he wouldn’t be a top pick in the NBA draft. He wasn’t even a first-rounder. The Warriors selected Green with the fifth pick of the second round in the 2012 NBA draft.

Like his first year at MSU, Green’s rookie campaign at Golden State was far from glorious. He struggled to find his identity and put up dismal offensive numbers. Although he earned a lot of minutes on a decent team, he made less than a third of his field goal attempts, which is downright awful, and a far cry from the kind of efficiency he showcased in college. 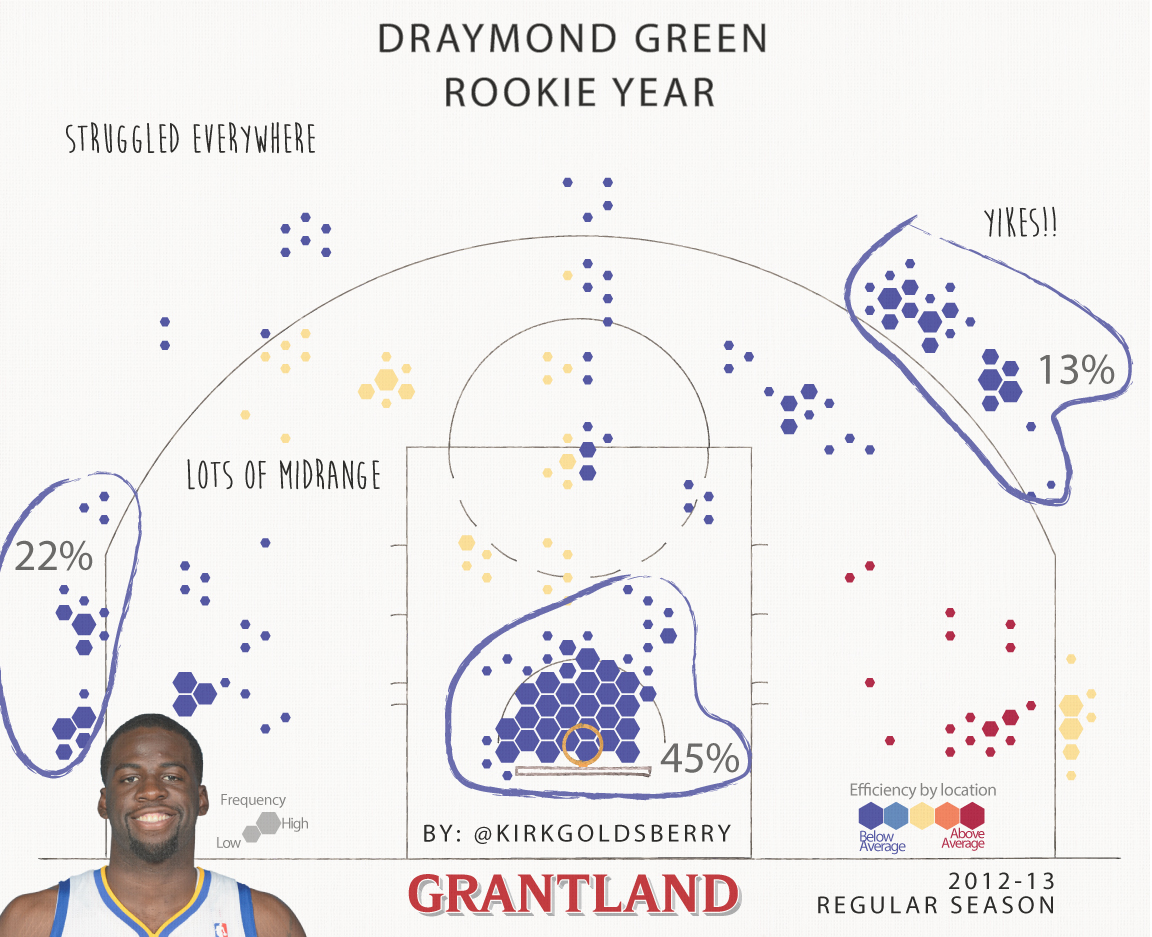 In the summer after his rookie season, Green says he rededicated himself to conditioning; he dropped 20 pounds between the 2013 playoffs and the beginning of the 2013-14 season. It helped. He played over 20 minutes per game his second season, and his shooting efficiency, while still not great, climbed out of the basement. 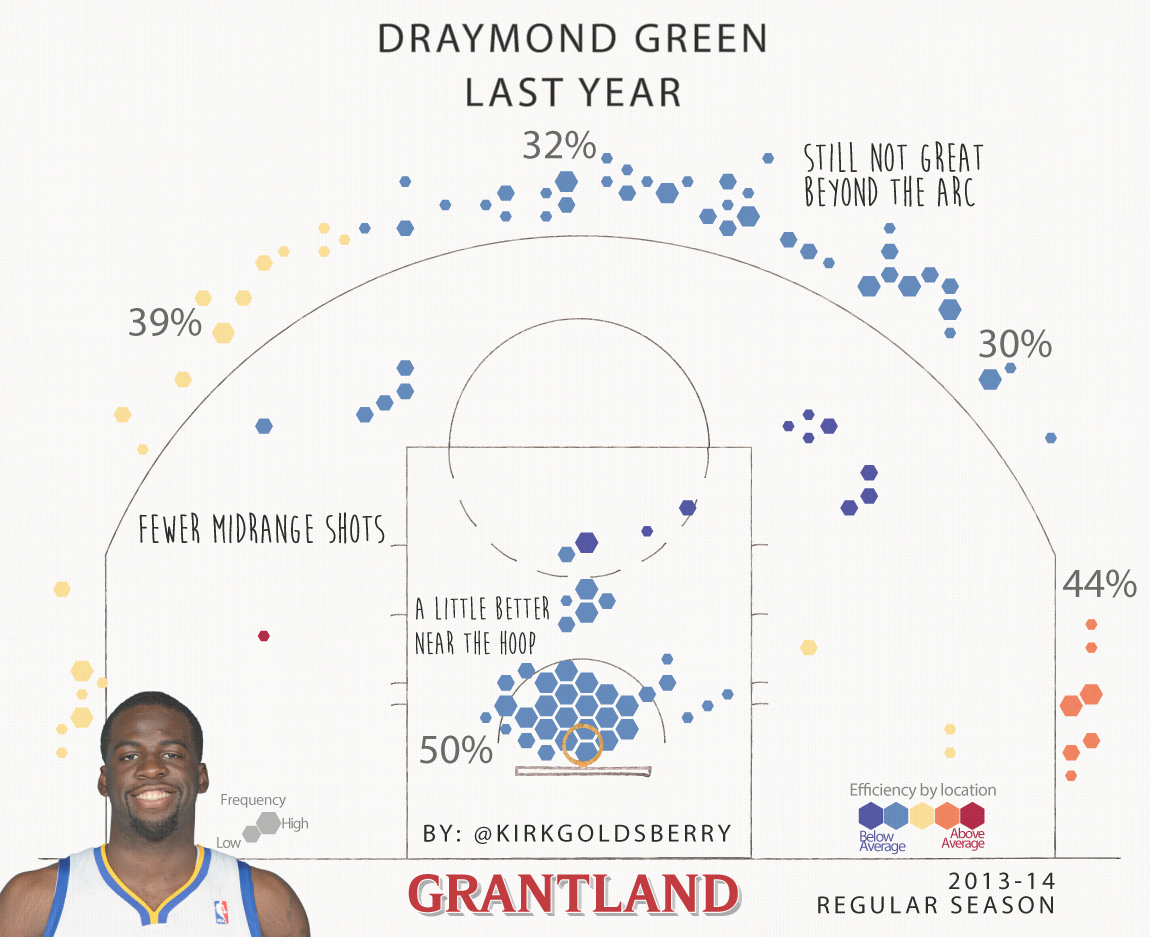 Green was by no means satisfied with his second-year performance. “Something I worked on a lot this summer was getting the ball up quicker and shooting over things, trying to simulate working on bigger guys.”

So far this season, he is converting 62 percent of his close-range shots — up from 50 percent last year. However, Green is quick to point out that at least part of that big uptick near the rim has to do with his new coach Steve Kerr’s offense, which creates better scoring opportunities. “I’ve just been getting better shots this year as well — a lot of uncontested ones within the flow of the offense,” he says. “With all the ball movement you get a few easy ones, and that jacks up that percentage quite a bit.”

It’s rare for a player to simultaneously exhibit large increases in minutes, usage, and efficiency, but that’s exactly what Green is doing this year. He has started all 25 games and is setting career marks in just about every category, including minutes, points per game, field goal percentage, rebounds, assists, and blocks.

His offensive production is much more concentrated in two key areas: the restricted area and beyond the arc. Two seasons ago, 41 percent of his attempts occurred in the midrange; this year, only 13 percent of his shots come from that area, meaning virtually all of his shots come from either beyond the arc or in the restricted area. And he suddenly is converting his jump shots at much more efficient levels, something he credits at least partially to playing with the Splash Brothers: 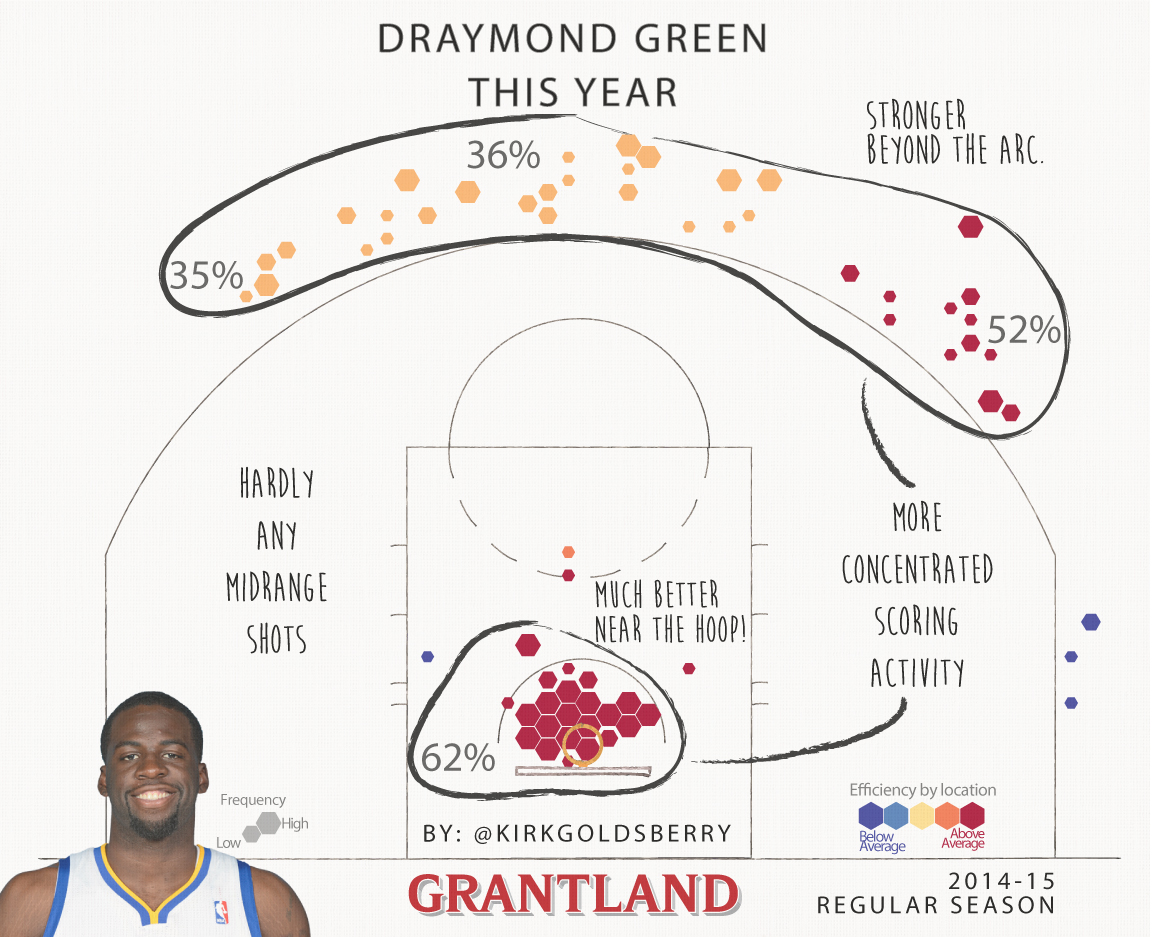 While he acknowledges that Kerr, Curry, and Thompson all deserve some credit, there’s no doubt that the biggest catalyst for his development is Green himself. After all, his former coaches all fawn over his intelligence. Tom Izzo said in 2012 that Green was “smart like [Shane] Battier, where what he lacks maybe in defensive ability as far as quickness, he makes up for as far as brains.” A year later, in the summer after Green’s rookie season, Mark Jackson proclaimed, “He’s a guy who, if he retired today, I’d hire him as a coach.”

You can’t have a conversation about Green without someone mentioning his toughness and his basketball IQ.  According to him, the toughness comes from Saginaw. Playing basketball is easy compared to many things he encountered growing up. “Wherever you go in Michigan you find that toughness. I don’t know if it’s the weather or the hard times,” he says. “It’s like, if I can make it out of here, I had to be super tough. You mean to tell me I can’t go battle with somebody under the rim?”

Saginaw made him tough, but Green says much of his on-court smarts comes from studying under Professor Izzo in East Lansing. “Coach Izzo taught me to think the game. I was blessed with a high IQ, but it was more of a matter of just fine-tuning that and really making it work for me.”

In just his third season, Green has, according to Kerr, become the “heart and soul” of one of the best teams in the NBA. His blend of toughness, leadership, thoughtfulness, and dedication is extremely unique. He’s also one of a decreasing number of players in the league who spent four years in college and earned a college degree. Green may be the “most improved” player in the league thus far, but it’s important to remember that nobody gets to where Green is without years of constant work. Along with guys like Jimmy Butler, Kawhi Leonard, and Anthony Davis, Green is a poster boy for the very idea of player development in the NBA. Underestimate him at your own peril.

Hall of Fame Voting Primer: My Top 10, Plus a Randy Johnson Appreciation