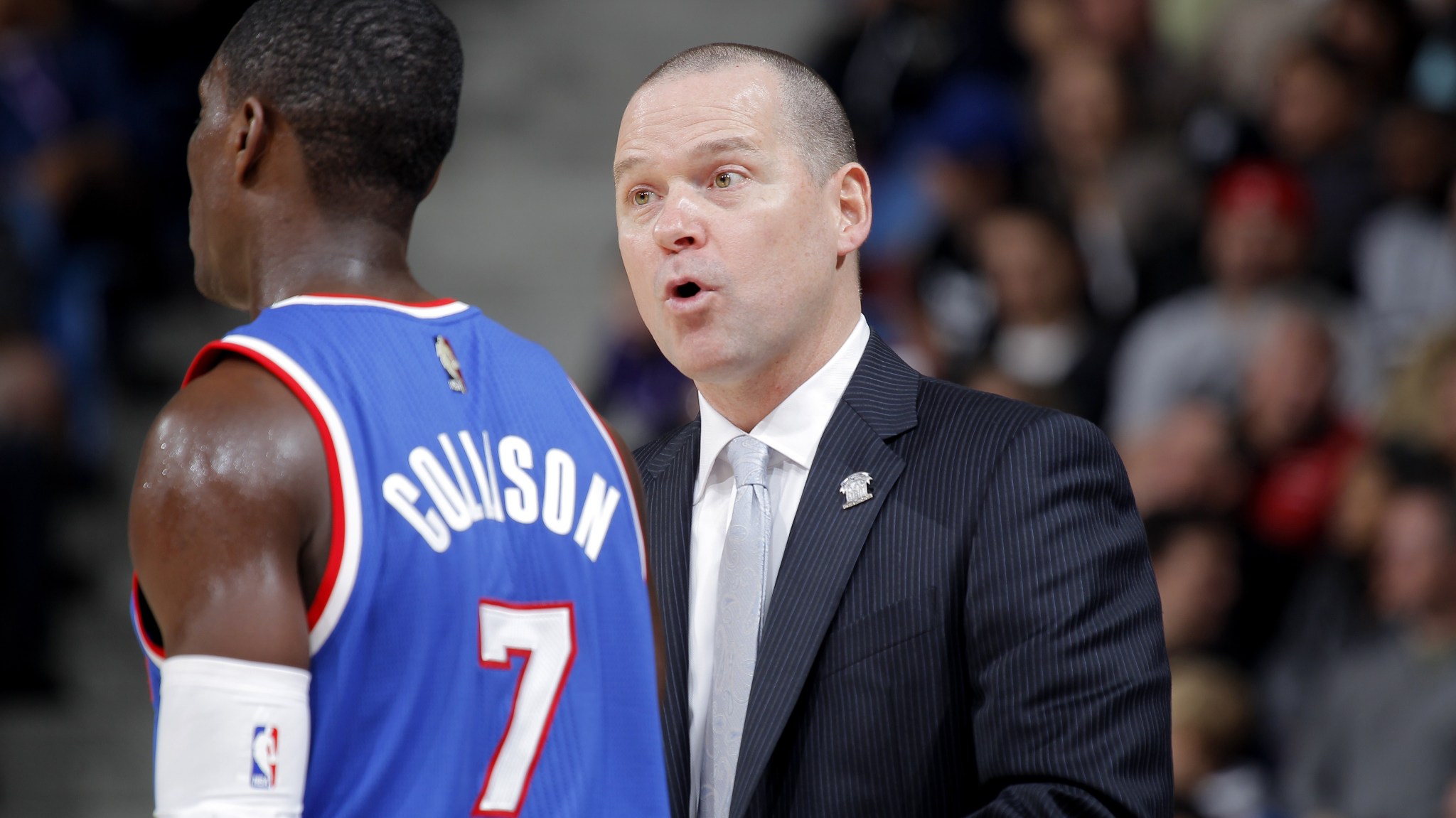 There are a lot of issues roiling around the Kings’ shocking decision to fire Mike Malone, but the bottom line is this: The Kings brass, including Vivek Ranadivé, the team’s post-Maloof owner, has never been super-comfortable with Malone, and management appears to hold unreasonable expectations for the current roster, per several league sources familiar with the matter.

The Kings have played the second-toughest schedule in the league. They are 11-13. Their best player by a mile, DeMarcus Cousins, has missed the team’s last nine games — a stretch in which the Kings have gone just 2-7. The Kings have plummeted down the standings in the Western Conference bloodbath during that cold streak, and they’ve lost three winnable games against bad teams — Orlando, Detroit, and the Lakers.

But they’ve also remained surprisingly competitive without Boogie punking dudes in the post. They took Houston to overtime last week, and pushed hard against San Antonio, Memphis, and Toronto. (In fairness, they also blew mammoth leads in consecutive early November losses to Memphis and Dallas.) Opponents have outscored the Kings by about 3.4 points per 100 possessions since viral meningitis wiped Cousins from the lineup in late November, per NBA.com. A dozen teams have put up worse per-possession scoring margins during that span, including some teams that are actually trying to win.

Gregg Popovich might not survive that kind of irrational exuberance. Malone is no Popovich, and he had the misfortune (in retrospect, anyway) of landing his first NBA head-coaching job before Ranadivé selected Pete D’Alessandro as the team’s general manager. The process normally goes the other way around, with a GM hand-picking a head coach with whom he feels comfortable.

The relationship between Malone, D’Alessandro, and other Sacramento higher-ups was fraught with tension almost from the start, per Sam Amick of USA Today, Adrian Wojnarowski of Yahoo, and several league sources. (Wojnarowski broke the news of the firing.) The hiring timetable was awkward, but fissures cracked open over two other big-picture issues: playing style and expectations for the current roster.

Malone now joins Shareef Abdur-Rahim on the list of ousted employees the Kings hired before D’Alessandro and Chris Mullin — the latter a top adviser who has Ranadivé’s ear. Abdur-Rahim expressed disagreement with D’Alessandro, Mullin, and Mitch Richmond during the draft process, and left the team shortly after an argument on draft night, per several league sources.

Ranadivé favors an uptempo game, and even suggested that Malone experiment with a 4-on-5 defense and one cherry picker, sources told Grantland in October. The team’s D-League outfit in Reno is piling up points at a frenetic pace. Darren Collison is a human turbo boost, and in Rudy Gay and Derrick Williams, the Kings have two plausible small-ball power forwards who could weaponize undersized lineups with Cousins as a break-pushing center.

Malone has leaned on small ball off and on since the Kings acquired Williams and then Gay early last season, but it has never been an every-game staple of his rotation. Perhaps organizational anxiety with that increased when Cousins took ill; he is the team’s only plus two-way big, and his absence would seem to have afforded Malone the opportunity to go a bit crazier with small ball. If you don’t have great bigs, why play them?

But small-ball lineups tend to suffer defensively, and the Kings haven’t been able to guard at all this season without Cousins. They’ve allowed a stingy 98.3 points per 100 possessions with Cousins on the floor, but that number balloons to 108.2 when he’s on the bench, per NBA.com. That’s equivalent to the gap between a top-five defense and a bottom-five outfit.

The team’s offense has also cratered without Cousins’s post-up bullying, the part of his game that he has embraced under Malone after monkeying around the elbows under previous coaches. Cousins can still hurt you from out there — he’s a wicked passer, and a good midrange shooter when he’s open — but the Kings rev up when he’s attacking the rim, drawing fouls, and kicking the ball out of double-teams.

It’s tempting to give Malone too much credit for Cousins’s development. Some of it is probably just Cousins getting older, maturing, and gaining a better understanding of how to play both ends — of where he scores best, and the tricky dance of containing ball handlers on pick-and-roll defense. But Malone has been on the sidelines for that development, and by all accounts, he has a solid relationship with Cousins. That would normally count for a lot, especially since Cousins clashed with every one of Malone’s predecessors.

This roster, even with Cousins, is just not as good as the brass seems to think. Without him, it’s a mess. Jason Thompson is having a strong defensive season, particularly on the block, but he’s an nonentity on offense. Carl Landry is only beginning to find his game again after a pile of injuries, and he’s a minus defender even at peak levels. No one guards Reggie Evans.

The rest of the roster dearly lacks shooting; the Kings cannot space the floor to save their lives. You can talk pace-and-space all you want, but even if the Kings ran like all hell, they’re only set up to play pace-and-brick. Collison has backed up D’Alessandro’s bet on him, but he’s shooting just 30 percent from deep and he’s never been especially threatening out there. Gay, another smart D’Alessandro wager, has reblossomed in Sacramento precisely because he’s cut some of his long jumpers in favor of patient stuff in the pick-and-roll and the post.

Ben McLemore has been a quiet success story from long range, but he doesn’t shoot as many 3s as you’d like from your lone sniper. Nik Stauskas — STAUSKAS! — has shown flashes, including a couple of nifty dribble drives in recent games, but he has been reluctant to shoot even when wide open at times. He also can’t guard anyone yet, which is exactly what you’d expect from most rookies — and why coaches under pressure are hesitant to trust them.

That roster without Cousins is simply not good. We didn’t get a chance to see how Oklahoma City would have fared long-term with Russell Westbrook as alpha dog, but Gay is not near Westbrook’s overall level, and the rest of the team is pretty blah for now.

The Kings, deep down, have to know that. This may ultimately have been more about style than results, though Sacramento higher-ups clearly have an inflated opinion of the current roster. Even so, the roster isn’t exactly hard-wired to play a racing game. These are not the Steve Nash Suns. Going smaller would juice the pace, and if Williams has an NBA future, it’s likely as a small-ball power forward who shoots 3s off the catch and mixes in a little pump-and-drive — a new Al Harrington, basically.

Still, with a low-post beast and a patient prober like Gay, this group doesn’t scream “run, run, run.” The offense with Cousins was working; the Kings score like hell when he’s on the floor, and they’re still hanging around the league average even amid his illness. They showed a ton of progress defensively over the first 15 games. Cousins has become an expert at corralling point guards on the pick-and-roll, coaxing them off-balance with little lunges and feints. He’s not a rim protector in the traditional, high-flying sense, but he’s doing the job his way if point guards don’t know whether to shoot or pass when they enter his paint.

Malone softened his overall scheme over the last calendar year, gradually implementing a more conservative style that allowed Cousins to drop back against the pick-and-roll — a smart adjustment. Everyone had a better grasp of how to move around the floor on a string — helping, recovering, and rotating to the correct spot at the correct time.

There is just no basketball reason to fire Malone right now, especially with no quality replacement lined up and millions owed him in the future. Tyrone Corbin, who will serve as interim head coach, was a flop in Utah; nothing in his record there suggests he can coach defense on Malone’s level or build a creative up-tempo offense heavy on 3s. Perhaps that doesn’t matter if Corbin is just a cipher for ownership.

George Karl would be great, and Wojnarowski reported he may at some point be on Ranadivé’s wish list. (Watching Karl and Ranadivé butt heads would be incredible.) But if that’s the case, why let Corbin take the reins for the rest of this season? Why not fire Malone last summer if stylistic and ideological divisions had already calcified? Malone was absolutely threatened by the team’s move over the summer to hire a lead assistant from a pool that included Alvin Gentry, per several sources familiar with the matter. (Three league sources say Gentry was uncomfortable with the possibility that the Kings were setting him up to succeed Malone, and ended up taking an assistant job under Steve Kerr in Golden State. The Kings deny they had any such plans.) Malone ultimately won that argument; Corbin was his choice. But if he felt threatened then, what hope was there of repairing things?

There are all sorts of side issues, including Malone’s reported opposition to a Josh Smith trade. As I’ve written before, the Kings poked around about Smith, but they weren’t willing to part with young players or draft picks to get him. The Pistons, for their part, weren’t willing in July and August to dump Smith for a bundle of bad Sacramento contracts — even if doing so would have helped them secure Greg Monroe. As things stand now, Monroe is a strong bet to walk in the offseason for nothing.

Look, Malone is not some incredible coaching genius. He was given too much credit for the Warriors’ defensive improvement under Mark Jackson, and it took him a while to find a style that fit Sacramento’s roster on that end. But he was doing damn well with this group, and with this ornery franchise player. The Kings were on the upswing, a happy NBA story. Now they’re a depressing mystery again.

There’s a lesson here, too: Never underestimate a wacky ownership. Today marks the first day on which most free agents signed last summer can be traded, and ESPN’s Marc Stein and Ohm Youngmisuk reported last week that the Nets are open to dealing all their stars. Don’t be shocked if Sacramento sniffs around a bunch of trades. The Kings are full of surprises.