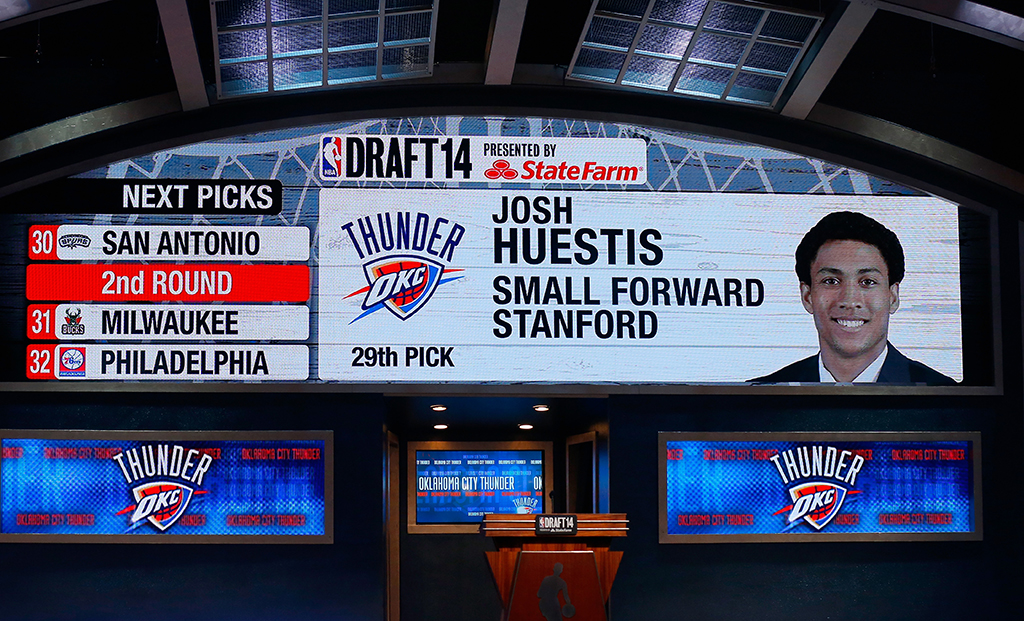 It was easy to feel outraged for Josh Huestis, the 29th pick in the most recent NBA draft, when news broke that the Thunder had convinced him to play for their D-League team next season instead of signing his rookie contract. Assuming both parties hold true to the deal, Huestis will become the first U.S.-based first-round “draft-and-stash” pick in the D-League.

The Thunder pulled this last season with Grant Jerrett, but Jerrett was a second-round pick. Second-rounders are guaranteed $0 of NBA contract money, and a decent chunk of them, even the ones plucked from U.S. colleges, never earn anything substantive in the NBA. Some get cut after training camp and bounce between 10-day contracts, D-League stints, and international adventures until they give up. Even those who sign multiyear NBA deals often agree to contracts that are completely nonguaranteed in every season, so that teams can waive them anytime without any cost.

The main benefit of being a first-round pick is avoidance of that uncertainty. First-round picks are guaranteed two years of full NBA paychecks, unless their team renounces their draft rights, which essentially never happens. Huestis could guarantee himself $1.5 million today by signing a contract the Thunder had to place in front of him earlier this month by league rule.

But Huestis isn’t signing that contract. It’s there, dangling in front of him, an untouchable temptation on the level of the water and fruit that the cruel Greek gods placed just beyond the reach of the king Tantalus. Signing that contract would violate a verbal agreement Huestis made with the Thunder before the draft, according to Mitchell Butler and Toby Bailey, his agents. Huestis will shove that paper aside and instead sign with the Thunder’s D-League team, the 66ers, for something in the range of $25,000.

Butler will help Huestis along by trying to gin up appearance fees, and agents have long lent players money against future earnings. “We have our work cut out for us,” Butler says with a laugh. “But we will try to subsidize him as much as possible.”

It seems ridiculous, and almost exploitative. The gains for the Thunder are obvious at first glance. They don’t have to pay Huestis a dime this season, which is nice, since they are only about $1.8 million under the luxury tax. They have 15 players on their roster, including 14 guys with fully guaranteed contracts for 2014-15. Stashing Huestis in the D-League saves them from having to cut someone — likely Hasheem Thabeet, who would seem eminently able to be cut.

Picks in the late 20s are increasingly looked upon as burdens — mandated million-dollar salaries attached to guys who likely won’t play big minutes on good teams. The Thunder found a way to escape one such salary, at least for now.

Huestis in this telling appears the dupe of a dictatorial regime. But that holds only if you assume that $1.5 million would have been available to Huestis in any other scenario, and that does not appear to have been the case. Huestis and his agents were worried he wouldn’t be drafted at all, they told Grantland on Wednesday. “We didn’t know if he would even get picked in the second round,” Butler says. “A lot of really good players didn’t get drafted. We wanted to think creatively to get his name called.”

Being undrafted isn’t a death sentence, and some agents prefer it to having their guy picked in the latter half of the second round. Undrafted players are free agents, able to negotiate with teams all over the world.

But they’re guaranteed nothing. Europe is the next natural option, and teams have long been Euro-stashing international prospects — picking them in the draft, but leaving them in Europe to develop on some other team’s dime. Teams have mostly done this with international-born guys already playing in Europe, often in their home countries, where they speak the native language and have a built-in support network.

Teams of late have tried to push the Europe option on U.S. college players, a subject that comes up in pre-draft conversations. Houston two years ago was interested in drafting Andrew Goudelock in the second round, but only if Goudelock would agree to play abroad for at least one season, according to Goudelock’s agent, Austin Walton. Goudelock had no interest in that, and so Houston passed; the Lakers drafted Goudelock later in the second round.

That kind of pre-draft chatter is how Oklahoma City will get around rules that clearly ban teams from discussing compensation with prospects before the draft. Where a prospect might play in the future is technically not the same thing as compensation, even if choosing a league also means choosing a salary band. There is a long precedent that, “Hey, what if you played in France next season?” is not the same thing as, “Hey, would you be cool if we paid you at 80 percent of the rookie scale, or would you throw a fit?”

The Thunder aren’t even paying Huestis’s salary next season, even though they own the D-League team on which Huestis will play. Players in the D-League technically sign contracts with the NBA itself, and draw their paychecks from the league office. This is all quite awkward, but apparently not illegal.

Huestis could have passed on the Thunder’s offer and made some scratch in Europe next season, but he’s a marginal prospect; executives and agents peg him as the sort of player who might earn in the $80,000 range for a season’s work in a European league. And there are still guys earning much more than that, including some high-profile players, whose teams are way behind on paying them. “We were less inclined to do the European option,” Butler says. “We feel like you have no control over it.”

Huestis is still taking an enormous risk here. The Thunder have surely told him he’ll get his guaranteed $1.5 million if he waits a year, maybe two, and shows progress in the D-League. Huestis played a lot of power forward at Stanford, but both he and the Thunder see him as a wing player in the NBA, and Huestis knows he needs time to develop wing skills.

But there’s a chance those skills never develop. What if Huestis shoots 20 percent from 3-point range in the D-League and can’t dribble or defend against his new level of competition? What if he blows out his knee? The Thunder in those doomsday scenarios would not have to pay him a cent, and though there would be some dishonor in screwing Huestis that way, this is a franchise that has been very careful about managing its roster and bottom line — even though it is raking in profits at a level few teams can reach. “It’s a little dicey for us,” Butler says, “but the reward outweighed the risk.”

Oklahoma City did reward Jerrett’s patience last season when it signed him to a “rest-of-season” contract in early April. Jerrett didn’t play one minute for the team, but that contract gave Oklahoma City a very limited version of Bird rights on Jerrett, which in turn allowed the Thunder to sign him this summer to a four-year deal at a salary level above what he could have earned had he signed the same contract immediately after the 2013 draft.

Butler says he discussed the plan with the players’ union, which has not registered any vigorous objection. The deal may work as a huge plus for Huestis, though it did push one likely first-round pick back into the second round — and out of the guaranteed money range.

The union actually views the Huestis move as an example of player empowerment that could have major long-term implications. “This is an example of the player flipping the script,” says Ron Klempner, the interim executive director of the union. “The player essentially drafted his team.”

The deal is proof that teams have an ambivalent relationship with low-first-round picks, since Oklahoma City is dodging the rookie scale here, Klempner says. But that can cut both ways. “The rookie wage scale was management-imposed,” he says. “Players have always been in favor of more open negotiation for rookies. Maybe [Huestis] will lead to a full reconsideration of the rookie wage scale.”

In other words: If teams want wiggle room with someone picked in the late 20s, then they should grant that same negotiating wiggle room for Anthony Davis and Andrew Wiggins. The NBA has been down that road before, and would fight hard against any removal of the rookie scale, but Klempner has a point.

Butler swears the two sides are not trying to set a precedent here. “This is probably a once-in-a-blue-moon kind of deal,” he says. This could simply be a rare instance of an innovative team seeing something it really likes in a prospect the rest of the league considers forgettable, and finding a way to fit him into a roster that is pricey and nearly full. And Huestis would have only considered this route for two franchises, Butler says: the Thunder and Spurs. San Antonio picked one slot behind Oklahoma City in the first round, but it zeroed in on Kyle Anderson long before the draft.

The Thunder might have taken Huestis in the second round, but they apparently could not find a trade partner in the right pick range on draft night. A lot of folks around the league are more confused about why the Thunder did this than about Huestis’s perspective. They could have dealt the pick — and they tried to trade it for Iman Shumpert ahead of last season’s trade deadline — drafted a better player, traded into the second round, bought a second-rounder, or just punted this experiment altogether.

But they went this route in part because of a new rule this season that guarantees Huestis will play only for the Thunder’s D-League team. Until now, any player interested in signing with the D-League was fair game for any of the D-League’s 17 (and now a record 18) teams via the draft or free agency. Several teams, including the Thunder, complained about players they had picked in the NBA draft flying around to random D-League teams — clubs with coaches and playing philosophies the Thunder did not oversee.

Huestis might not be setting some groundbreaking precedent here, but he will stand as the latest step toward the NBA having a true minor league system. He would not be sacrificing nearly as much money if the NBA had 30 minor league teams, one for each parent club, and an expanded NBA roster with two or three spots reserved for players who shuttle back and forth between the D-League and the NBA parent. Players inhabiting those roster spots would presumably earn money on some in-between salary scale well above current D-League levels.

The union would likely support such a system, since it would create more overall jobs and perhaps allow older players to hang in the NBA longer as locker-room sages. The NBA will get there eventually; the number of D-League teams will likely climb to above 20 over the next 18 months or so. All of this helps explain why the union hasn’t raised a stink about what Huestis is doing now.

Huestis may stand to benefit the most out of all the actors here. It seems nuts at first blush that he won’t sign a seven-figure contract just sitting in front of him, but this is the only scenario in which that seven-figure contract would exist. Someone less honorable would absolutely considering double-crossing the Thunder and signing that deal tomorrow. Hell, I might. It would be the rational thing to do.

For now, let’s all just keep our fingers crossed for Huestis’s health.

Dirk Nowitzki Playing Baseball Looks As Awesome As It Sounds