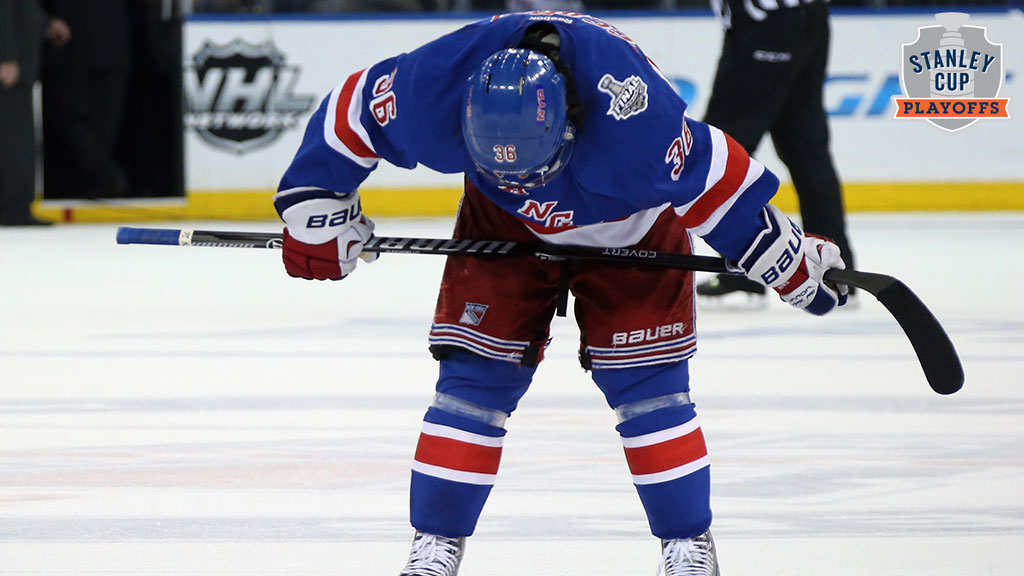 You’ve seen the stat by now. Through the first two games of the Stanley Cup finals, the Los Angeles Kings had not played one single second with a lead. And yet they arrived in New York up two games to none, thanks to a pair of overtime wins, both of which they racked up after coming back from a two-goal deficit.

While it’s rare to see a team come back and win the Cup after dropping the first two games on the road — it’s happened just five times in 48 such series — it wasn’t hard to think the Rangers had a shot if they could win Game 3. They’d shown they could play with the Kings. Now they just needed something to show for it.

After New York’s game-day skate on Monday, center Derick Brassard was asked whether the Rangers deserved a better fate. “Obviously it’s frustrating, to work so hard and not get rewarded with anything,” he said. “We know that we can beat them. If we go out there and play our game and the puck goes our way a little bit, I think we have a great chance.”

Talking about the puck going their way is the closest most hockey players will come to acknowledging the role of luck — one of the few four-letter words they’ll think twice about saying at the rink. But there’s no doubt the Rangers found themselves down 2-0 largely due to some tough breaks. Justin Williams’s overtime winner in Game 1 came after the puck hopped over Rangers defenseman Dan Girardi’s stick, and the turning point of Game 2 was when Dwight King’s goal was allowed to stand despite the fact he was sitting on top of Henrik Lundqvist at the time.

There are a hundred breaks like that in any game, of course, and we forget almost all of them seconds after they happen. Harping on luck is for losers, we’re told, and besides, all those breaks even out over a long season. In a short series, not so much.

But still … the Rangers had to get a bounce or two in Game 3, right?

Earlier in the day, Kings winger (and possible Conn Smythe front-runner) Williams talked about the dangerous game the team was playing. “We are well aware of the circumstances coming into the game. Could we be coming in here zero to two? Yes. Could it have been tied? Yes, absolutely,” Williams said. “We found a way to get it done. We’re proud of that.”

You felt like there was a “but” coming, and there was: “But we know we don’t want to give any life to this team.”

Heading into Game 3, a big part of that Rangers life force was expected to come from MSG fans witnessing the arena’s first Stanley Cup finals game in 20 years. But the crowd wasn’t all that loud, perhaps because of a choppy first period that saw the two teams combine for just nine shots, or maybe because some fans were realizing they had paid thousands of dollars for their seats. Most of the noise in the first was directed at the officials, who let all sorts of possible fouls go uncalled. We always want the referees to let the players play, right up until they actually do.

The first sign that the puck-luck pendulum hadn’t swung came late in the first, when Mats Zuccarello appeared to have an open net from in close. He hacked at the puck as he fell, only to be denied by a combination of the post and/or a diving Jonathan Quick’s stick (even Quick wasn’t sure if he’d touched it). An inch here or there, and the puck goes in, and maybe this time the Rangers can even hold a lead.

Instead, the dagger came at the buzzer. A harmless-looking Jeff Carter rush as the seconds ticked down ended with a wrist shot from well out. It was the kind of save Lundqvist makes every time, but this time a sliding Girardi got a leg in front of it. It tipped off his skate, the deflection was enough to fool Lundqvist, and after a review to make sure time hadn’t expired, the goal stood. After the game, Girardi was left shaking his head when asked about the goal. “Half an inch higher, it doesn’t hit me,” he said. “That’s just how it’s going.”

When the period was over, the Kings still hadn’t led in the series for so much as a single second — just for a fraction of one.

They’d end up holding that lead for 40 minutes more. A Jake Muzzin power-play goal four minutes into the second made it 2-0, and launched a stream of “dreaded two-goal lead” jokes. It also launched a steady stream of New York shots — 11 straight at one point, on their way to outshooting the Kings 32-15 overall. And it seemed like they’d finally solve Quick when Rick Nash stepped out from behind an open net. But Drew Doughty’s hook was just enough to haul the big Ranger down. It was an obvious penalty, and it was called, but the scoring chance was lost. Sometimes you make your own luck.

Late in the period, with the Kings still up by two, Mike Richards and Trevor Lewis skated in on a 2-on-1. Richards’s pass was broken up by Ryan McDonagh, exactly the kind of big defensive play the Rangers desperately needed. Then the puck bounced right back to Richards, because of course it did, and he slammed it home to make it 3-0.

The Rangers kept pressing in the third, but it was over. The puck hadn’t gone their way, not even a little bit. And now there was no life — not in the building, not in their chances to win the game, and barring a miracle now, not in this series.

After the game, Lundqvist couldn’t help but point out the obvious. “Well, you try to stay positive right now,” he said, not sounding especially positive. “But it’s tough, it’s really tough. We are doing a lot of good things, but you look at the goals, and we put two in our own net, and then just a tough play on the third one. At some point, you are going to need some puck luck, and we don’t have any right now. It feels like they have all of it.”

Right now, like Girardi said, that’s just how it’s going. And if it stays that way for one more game, the Rangers are gone. That may not be the fate they deserve, but they’ll get it anyway.