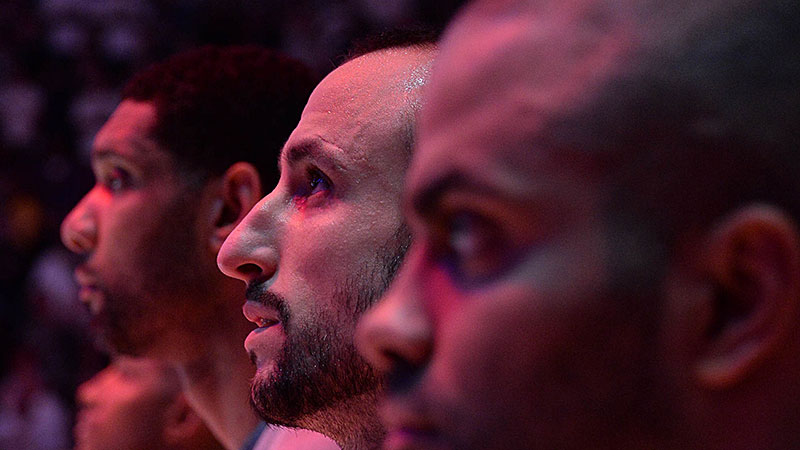 On November 9, 2012, the Spurs were in Sacramento to play the Kings. With less than a minute left in the game, they were up nine and had the ball; it was garbage time. Patty Mills raced around a big ol’ Boris Diaw screen and attacked the paint. As he reached the teeth of the Kings defense, he fed a bounce pass back to Diaw, who had trailed him into the lane. Diaw caught the pass and quickly rose up for something that resembled the kind of tear drop an off-balanced old man shoots at the YMCA.

But was it actually a shot attempt?

Scholars still squabble, but labels are unimportant here. The path of the ball’s strange arc never really threatened the rim. Everyone in Arco Arena knew whatever kind of duck it was, that it wasn’t going in; everyone including Tiago Splitter, who elevated somewhat prematurely from his rebounding position to catch the ball and dunk it for the last field goal of the game.

It went in the books as an alley-oop. During the 2012-13 season the Clippers had 148 alley-oops. The Spurs had one. And it was probably an accident.

The NBA has worked brilliantly over the last two decades to create a product that the world can love. It’s emphasized its superstar players and its highlight-creating plays.

Over this period, the San Antonio Spurs, who have perhaps been the league’s most steadily successful franchise over the last 15 years, have none of that stuff. Their roster is full of foreign names from faraway lands, it includes only one All-Star, and nobody averaging 20 points per game. Oh, and their coach is a brilliantly opaque curmudgeon.

From a marketing standpoint, they’re flies in the NBA ointment; from a basketball nerd’s perspective, they are the ointment. 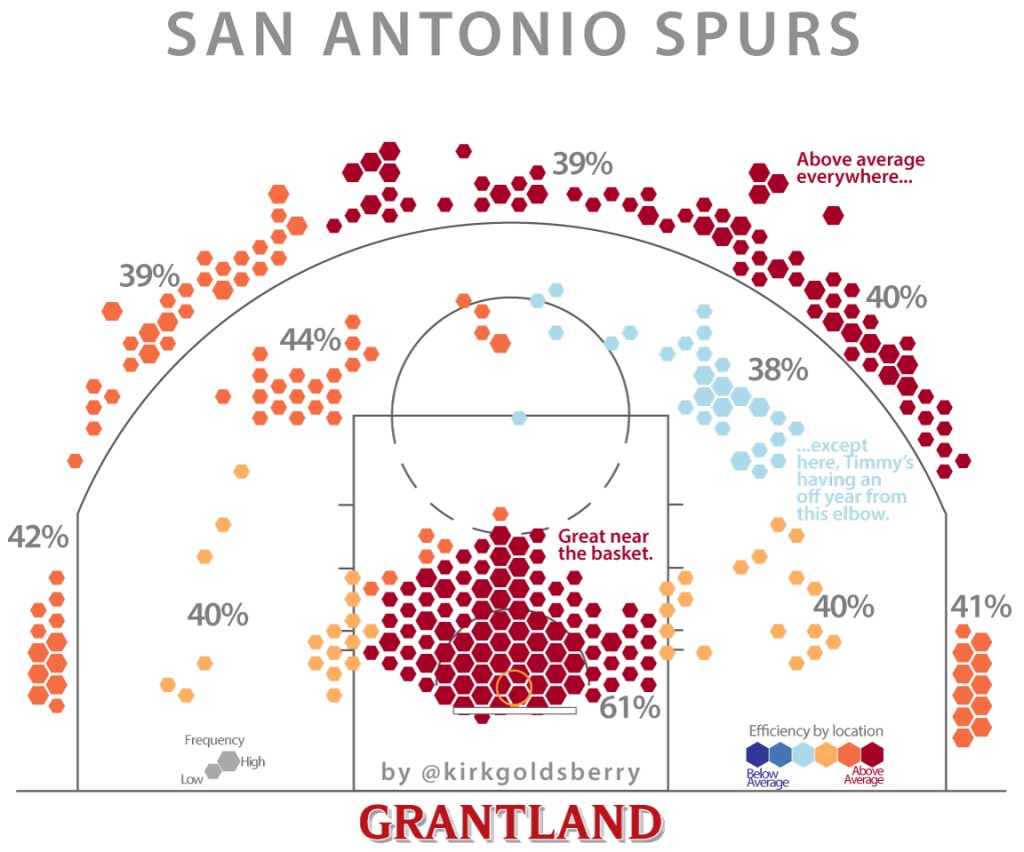 The Spurs run the prettiest offense in the world, and once again they’ve run it all the way to the top of the ferocious Western Conference. And once again, few people seem to care. They have won 11 games in a row and are playing their best basketball of the season. During the streak, they are outscoring opponents by more than 15 points per 100 possessions. During that same window the intentionally hapless Sixers are being outscored by nearly 16 per 100 possessions; in other words, the Spurs are almost as good as the Sixers are bad, and that’s saying something.

On the one hand, the Spurs offense is clever and their motion sets are difficult to defend. On the other hand, they’ve been doing a lot of the exact same stuff for so long it’s remarkable that their bread-and-butter plays are still so effective. The chief reason for that involves the humans wearing the jerseys. While the Spurs’ tactical architecture is impressive, it’s implemented by a roster of players dedicated to doing “the little things,” every possession of every game.

Here’s an example: The Spurs have long run a play simply called “the loop.” It’s a fairly basic sequence that involves looping a guard — often Tony Parker — around a daunting array of screens before having him receive a pass or a handoff near the elbow. It’s not so much a “play” as a vehicle to get Parker, or another playmaker, the ball, with a head of steam and either a mismatch or a winded defender frantically chasing him around.

There is an elegant engineering behind a movement like that, but the key to the play’s success lies in the execution. The Spurs have Tony Parker as the key actor in the set, but they also have Tim Duncan, Boris Diaw, and Tiago Splitter as potential screeners, along with a litany of well-placed spot-up shooters perfectly decorating the edges. It’s the best feng shui in all of Bexar County.

The clever tactics, unselfish execution, and ball movement are regularly punctuated by open looks for the scorers. Although each of the Spurs’ main producers has their own unique hot spots, it’s telling that so many of them are above-average shooters in the league’s most important real estate — that area close to the rim. Nice open shots near the basket are among the spoils of playing for the Spurs in 2014. 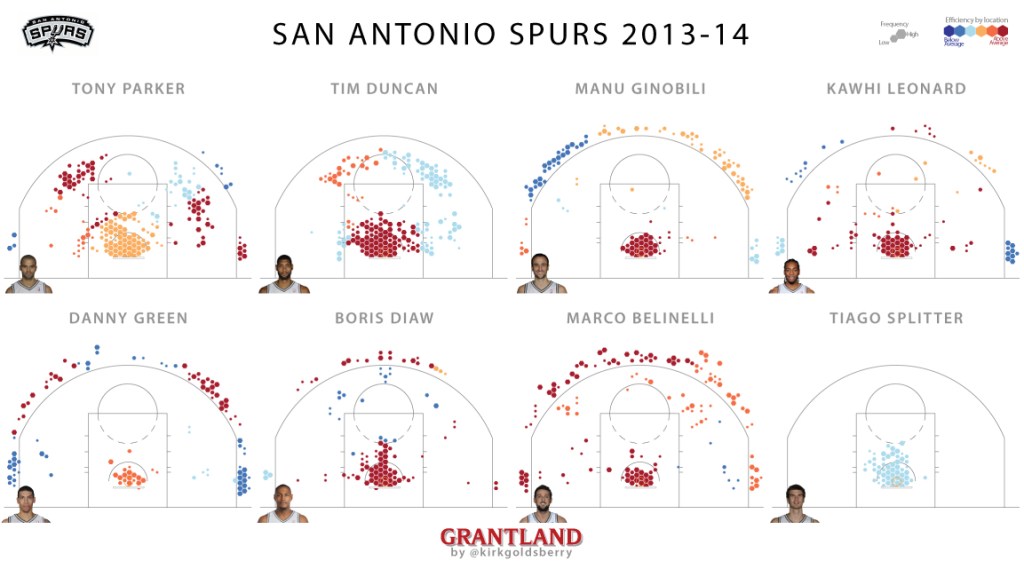 As a collective, the Spurs shoot above league averages from almost every spot on the court. This has a lot to do with the talent on their roster, but it arguably has just as much to do with the kinds of shots that they are taking — good shots. Last year on the Bulls, Marco Belinelli made 36 percent of his 3s, which is right at league average; this season, he’s made 44 percent of them, which is better than Steph Curry. Some of that improvement may be due to changes in his form, but surely some of it is because he gets better looks in San Antonio than he did in Chicago. Danny Green has a similar story. 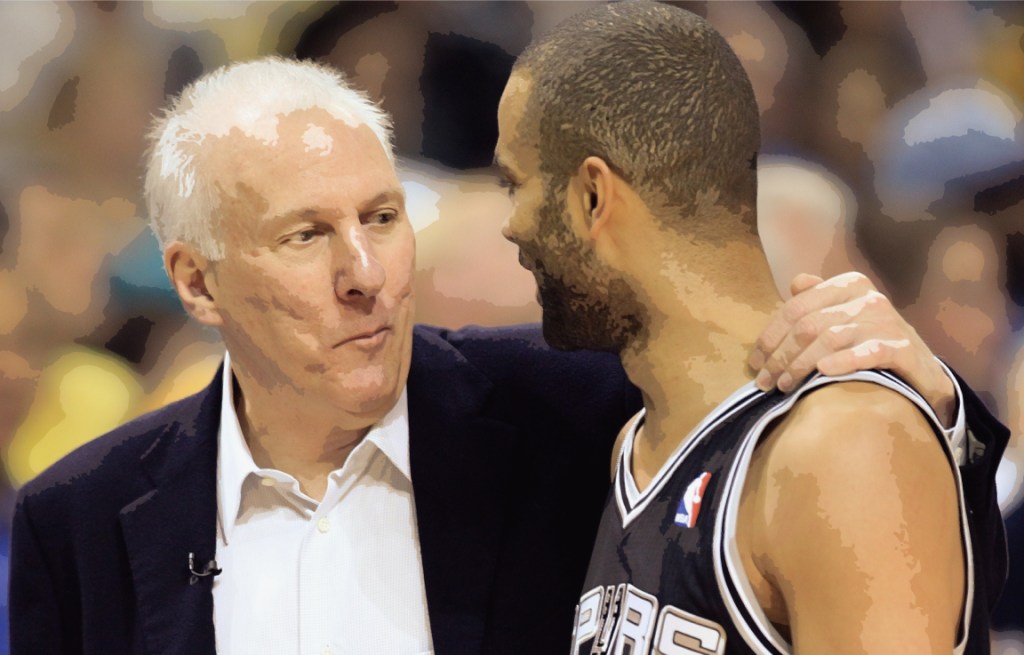 In a league obsessed with superstars, dunks, and endorsement deals, Gregg Popovich and the Spurs still dominate. From an X’s and O’s standpoint, although the Spurs offense is certainly clever, none of its key components are particularly complex, but that’s not the point; the system’s key actions are designed to put their talent in advantageous situations. And as the NBA and its mighty Western Conference prepares for another postseason gauntlet, it’s no surprise that Tony Parker and the Spurs are right there, ready to weave right through it again.

The Jets are among the teams that have inquired about Philadelphia Eagles wide receiver DeSean Jackson, according to a source informed of the process. Vick is close with Jackson, adding an interesting wrinkle to the situation.