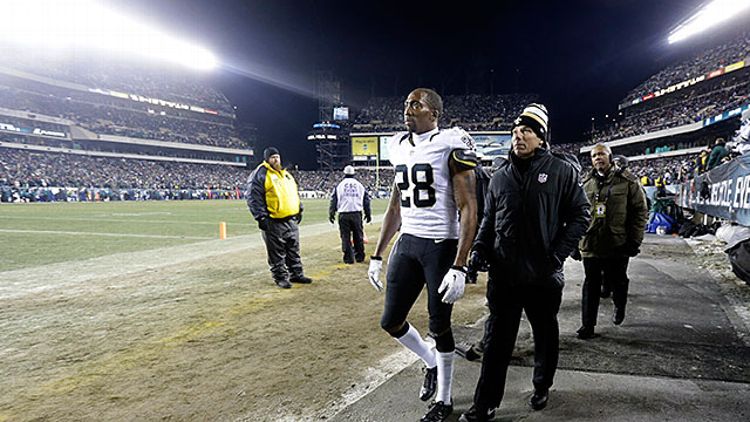 Without his helmet, New Orleans cornerback Keenan Lewis was easy to read. You could see the frustration, the anger, the befuddlement on his face. Taught to play through pain, here he was languishing on the sideline against his will, unable to defend the Saints’ diminishing lead against Philadelphia. Taking away a player’s helmet is a simple but effective task that prevents him from returning to the field against doctor’s orders, and as concussion awareness rises, how teams handle the issue continues to evolve. It was clear this season that the number of penalty flags for helmet-to-helmet hits was increasing. What didn’t fully register until wild-card weekend is that even legal plays are materially affecting the game. Concussions are having repercussions.

Lewis, the Saints’ top corner, gave himself a concussion during Saturday’s game against the Eagles by leading with his helmet into Jason Avant’s shoulder while jarring a pass loose. And in an instant, the flow of the game completely changed. For three quarters, Lewis had held the explosive DeSean Jackson to zero catches. As soon as he left the game, the Eagles began targeting his replacement. Just one play after Lewis went to the sideline, the Eagles struck, Nick Foles connecting with Jackson on a 40-yard bomb; he finished with three catches and drew a key 40-yard pass interference penalty.

NBC color commentator Cris Collinsworth, a Bengals receiver during the 1980s, explained the effect of Lewis’s injury on the game before making it clear this was a new development: “When I was playing football, he would be back in the game. The doctors now are taking a much stronger approach to this issue.”

Ultimately, the stricter concussion procedures mean that roster depth and coaching is even more important than it was just five years ago. Is an offensive coordinator capable of attacking the weak link that suddenly appears? Can the opposing defensive coach respond at a moment’s notice by adjusting his scheme?

Over wild-card weekend, that chess match started almost immediately. Think the Chiefs’ game plan changed a bit when Jamaal Charles, their leading rusher and leading receiver in 2013, hit his head on the turf on their opening drive? Backup Knile Davis played admirably, but a healthy Charles probably means the Chiefs successfully drain the clock with a 28-point lead in the second half. It didn’t help that Kansas City later lost Pro Bowl cornerback Brandon Flowers, concussed by a teammate in a goal-line traffic jam; the Colts responded with three rapid-fire touchdowns.

We should applaud the NFL’s efforts to reduce concussions — moving kickoffs, penalizing hits on defenseless receivers, shrinking the target radius on a quarterback enough to make William Tell sweat — but even best efforts are, ultimately, just efforts.

Remember that violent Aeneas Williams hit that ended Steve Young’s decorated career? Even with all the new restrictions, it would still be legal. Williams led with his shoulder and drilled Young’s torso, but Young’s head snapped back after the collision and struck the ground.

There will always be injuries in a sport filled with brutal collisions, even if the league asks Homer Simpson to design bubble-wrap uniforms. But while crutches and casts indicate torn ligaments and broken bones, the concussed athlete often looks fine.

Saints cornerback Corey White told the Times-Picayune what everybody knew Lewis was feeling during his failed argument to return. “Anytime you have to leave the game and feel like you can play, you want to come back in. Especially in a playoff game and you’re a vital point in our defense.” It’s just different in the playoffs. There is an urgency in the postseason — not just win-or-go-home, but win-or-tarnish-your-legacy — that isn’t there during the regular season, when even myopic fans understand why it’s worth preventing a player’s long-term absence.

Coaches don’t benefit from being emotional (has an official ever changed his call after absorbing obscenities?), and it was reassuring to see Andy Reid so stoic in a crumbling world — receiver Donnie Avery also left the game with a concussion — every time NBC showed his stone-faced reaction to another felled player. Injuries are inevitable. It’s how coaches respond that is different, and only the elite get to multiple conference championship games with a wide receiver playing defensive back.

Although the NFL’s new regulations have prevented concussions, they have also prolonged the absences from those that occur. That’s why it’s not immediately evident whether Lewis will be cleared to play in the Saints-Seahawks rematch this weekend, and why Wes Welker’s health will be under scrutiny after missing the Broncos’ last two regular-season games following a pair of concussions.

And that’s OK. Players will be sidelined by concussions more often, and flags or fines can’t change that. Now it’s time for coaches to show that they, at least, can think clearly.