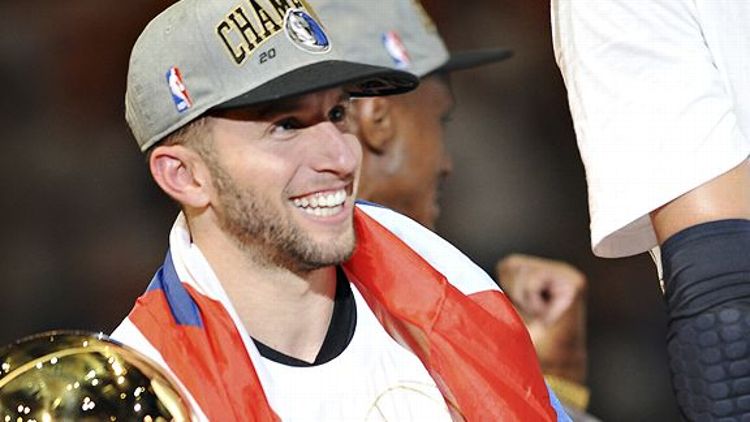 J.J. Barea and I have two things in common: We both went to Northeastern University at the start of the aughts and neither one of us looks like we would make very good professional basketball players. We played pickup hoops at the same gym on campus, but while Barea was undoubtedly playing on the court with all the school’s best players, I fumbled around on the other court with the other pudgy undergrads and “Bird,” the out-of-shape middle-aged guy who always wore goggles and a Larry Bird jersey. We have no mutual friends on Facebook.

Even if Barea had gone to Providence or Drexel, I’d still enjoy watching him because his game is so endearingly weird and hyperspecific. His game is like a weird Steve Nash B-side, where the preternatural court vision and the game control were too stoned to show up to the studio. With Nash, you get the sense that he penetrates with some sort of plan. Barea, who is listed at 6-foot-0, because the NBA refuses to acknowledge the existence of players between 67 and 71 inches tall, takes bizarre angles off of the pick-and-roll and negotiates crowded lanes with his own herky-jerky, chaotic style.

Throughout these playoffs, that style confused defenses, and, at times, helped carry the Mavericks to victory. The height of Barea-mania was the dominant Game 4 victory over the Lakers that saw the defending champs unceremoniously dismissed from the playoffs. Before getting turfed by Bynum, Barea went 9-of-14 from the field and picked up eight assists, producing his third-highest Game Score of the year. Jason Terry and Peja Stojakovic went 15-of-16 from downtown, and the Mavericks produced an Effective Field Goal Percentage (eFG%) of 74.0 percent, the best shooting performance by a team in the playoffs since 1985-86.

Although that was essentially the end of Stojakovic’s run — he went 5-of-25 from downtown against the Thunder and Heat before being dumped out of the rotation — the Mavericks continued to get contributions from Barea and friends. Barea used 24.4 percent of the Mavericks’ possessions during the playoffs while he was on the court — a higher Usage Rate than LeBron James, who used 24.2 percent of Heat’s possessions. Terry had four regular-season contests with a Game Score of 20 or more; he had four in 20 games during the playoffs, including his 27-point effort to close out the Finals. He ended with a 55.6 eFG%, the third-highest rate in the playoffs for players with 500 minutes or more. With Stojakovic out of the rotation, DeShawn Stevenson moved to the bench and found his stroke in the finals, going 13-of-23 from 3 after shooting 5-of-21 against the Thunder. Brian Cardinal came off the bench after six straight DNPs and contributed 28 minutes over the final three games of the series, throwing in two 3s and somehow creating a 3 with dribble penetration Sunday night.

From a historical perspective, the Mavericks got more out of their bench than just about any team of recent vintage. Of the available minutes during the playoffs, 34.9 percent were used by players coming off the bench. That’s the second-highest percentage for a finalist since the 1990-91 campaign. Only the 2006-07 Spurs (35.4 percent) got more minutes from their second unit. Even more impressively, Dallas reserves accrued 36.8 percent of the team’s points during their title run. That put even the Spurs to shame.

The only question left for the Mavericks bench is whether or not it will stay intact. Stojakovic is surely retiring. Terry’s a great shooter, but his playoff performance was well above what he’s exhibited over the past few years, and he’ll turn 34 during the interminable lockout. Cardinal may be poached by an insurance firm looking for a tall, bald white man to serve in middle management. DeShawn Stevenson’s an unrestricted free agent, as are starters Caron Butler and Tyson Chandler. Joining them is J.J. Barea, coming off of a 20-game stretch that saw him take over games against some of the league’s best teams. With the possibility of a hard cap looming, Barea is likely to receive an offer that the Mavericks will be unable to match. With Rodrique Beaubois likely to step in as the primary backup to Jason Kidd, Barea has probably played his last game as a Dallas Mavericks player.