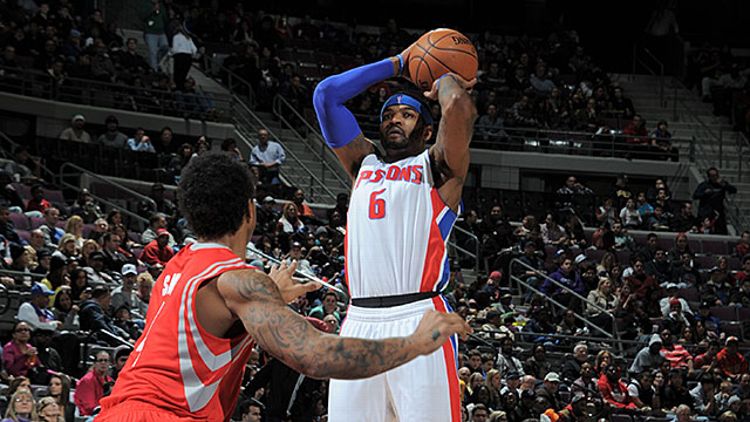 On Wednesday, we looked at the most efficient scoring players in the league. Today, we flip it around and report the bad news. Like Wednesday’s list, I limited this list to players with at least 300 field goal attempts, which gets Ricky Rubio and some others off the hook this time, but the season is young and this group will evolve over time.

Anyway, this is always a depressing exercise, because every year this list is full of great young talent who, for whatever reason, can’t make shots. This year is no exception. Everyone on this list is under 30 — there are two rookies — and every player here has the potential to be a really good NBA player. And of course, Josh Smith is back.

So, in no particular order:

Tyreke Evans is one of the most enigmatic players in the league. Anyone with eyeballs can see how gifted he is, but he just can’t shoot … or can he? Here are two stats about Evans from this season:

• Has made 82 percent of his free throws.

• Has made only 24 percent of his field goal attempts beyond eight feet.

I have trouble reconciling these two facts; how can a player so smooth at the line look so awful from the field? To his credit, Evans seems to be self-aware enough to not be an active jump shooter, but it is still frustrating. His ability to knock down free throws demonstrates that he has great touch, but something mechanical breaks down when he is shooting off the dribble. It seems like the right shooting coach could make it click, and if he could just convert those jumpers at league-average rates, his overall game would soar. He has all-world attacking skill, but without the threat of the jumper his defenders can sag and overprotect those driving lanes. 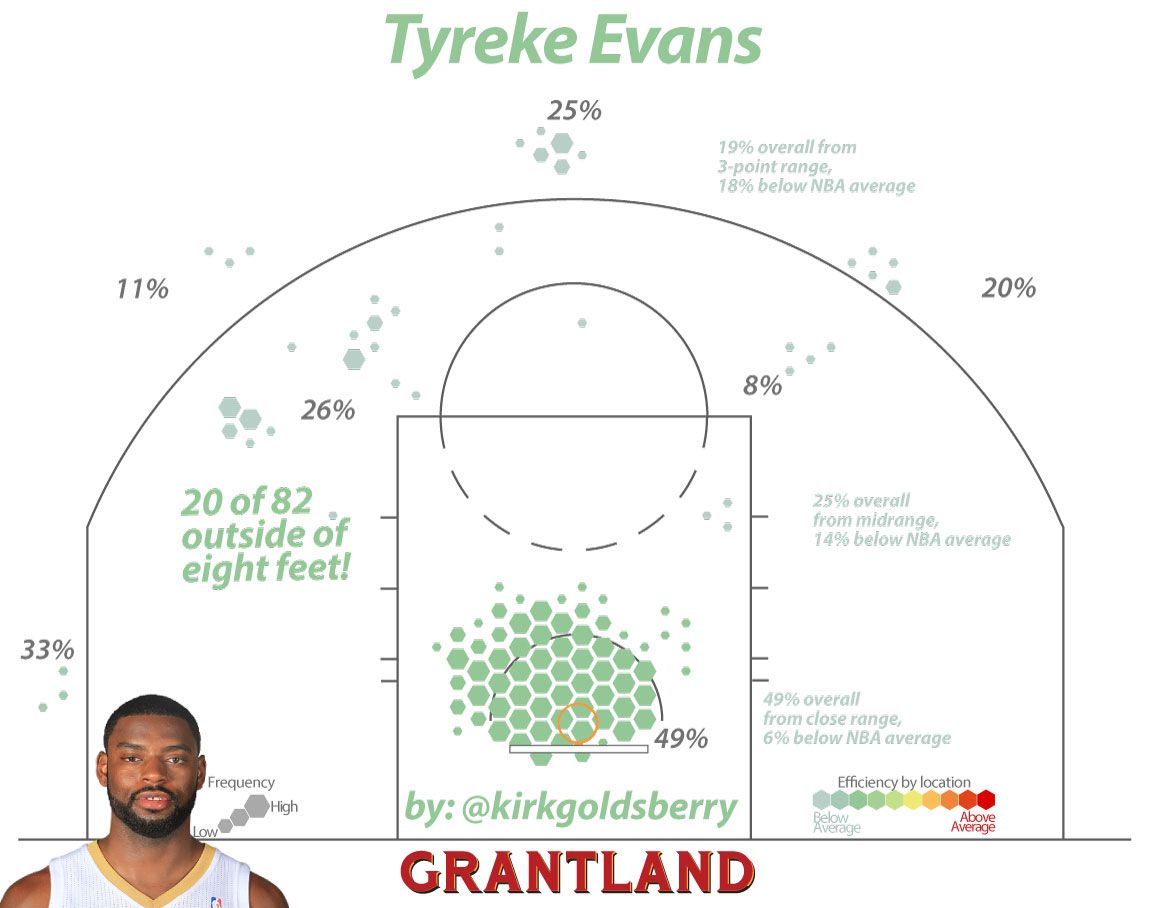 Speaking of Evans, a player who has been described as the “poor man’s Tyreke Evans” is, unsurprisingly, having a bad year from the field. In some ways, Tony Wroten’s shot chart looks like he should play for the Rockets; he absolutely refuses to shoot in the midrange. But unlike those guys in Houston, Wroten doesn’t make his 3s very often. He’s been pretty active beyond the arc, and he’s been terrible out there. Out of 85 players with at least 100 3-point attempts, Wroten is 84th in efficiency. Spoiler alert: Josh Smith ranks 85th. 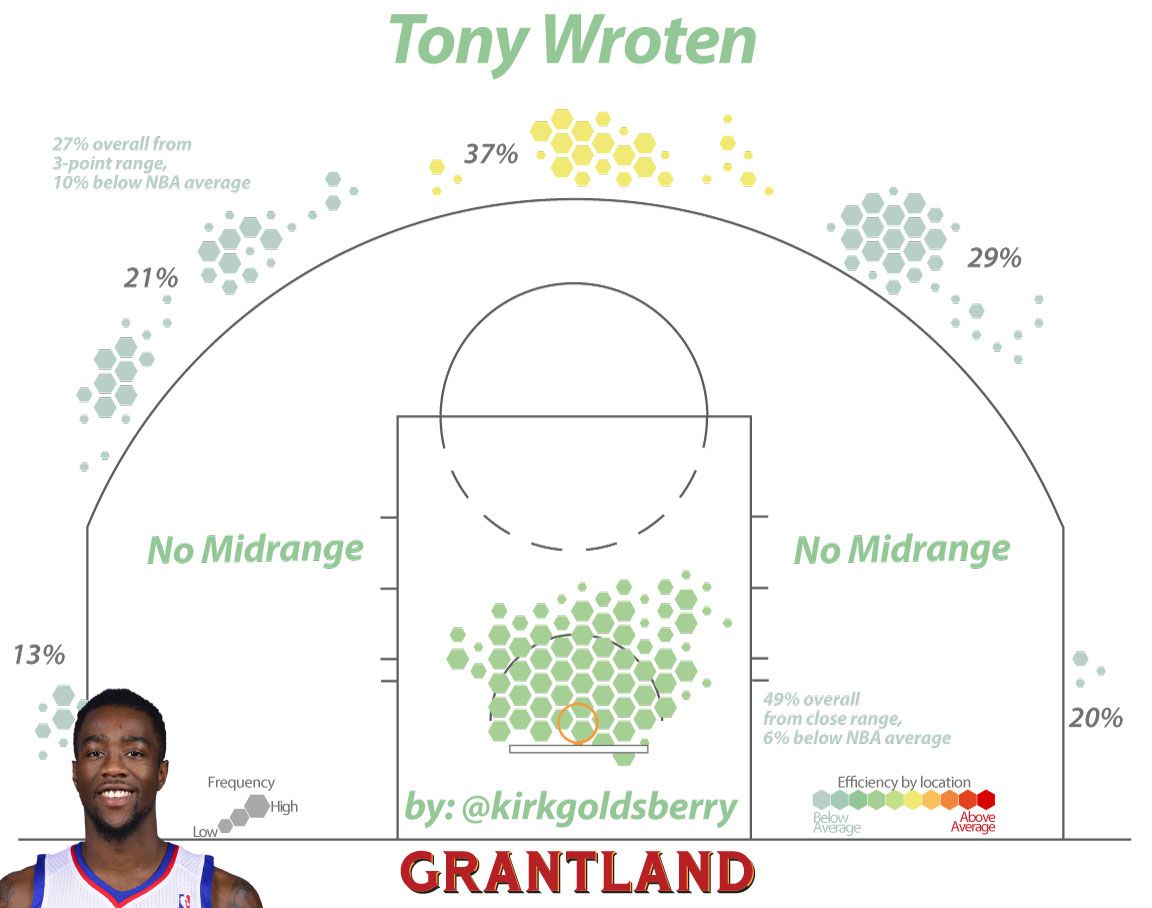 Oladipo is one of the best rookies in the league. He looks like the kind of player that will get better and savvier each year, and I bet he’ll have a long career in the league. Still, like many young players, he struggles to score. So far this year, Oladipo is a below-average producer everywhere on the court, with one exception: He’s pretty decent near the right elbow, which is encouraging. If he can develop that pull-up move, a lot of other things will fall into place. He has often been compared to Dwyane Wade, but as a scorer, he’s going to have to vastly improve his finishing skills to earn that comparison going forward. 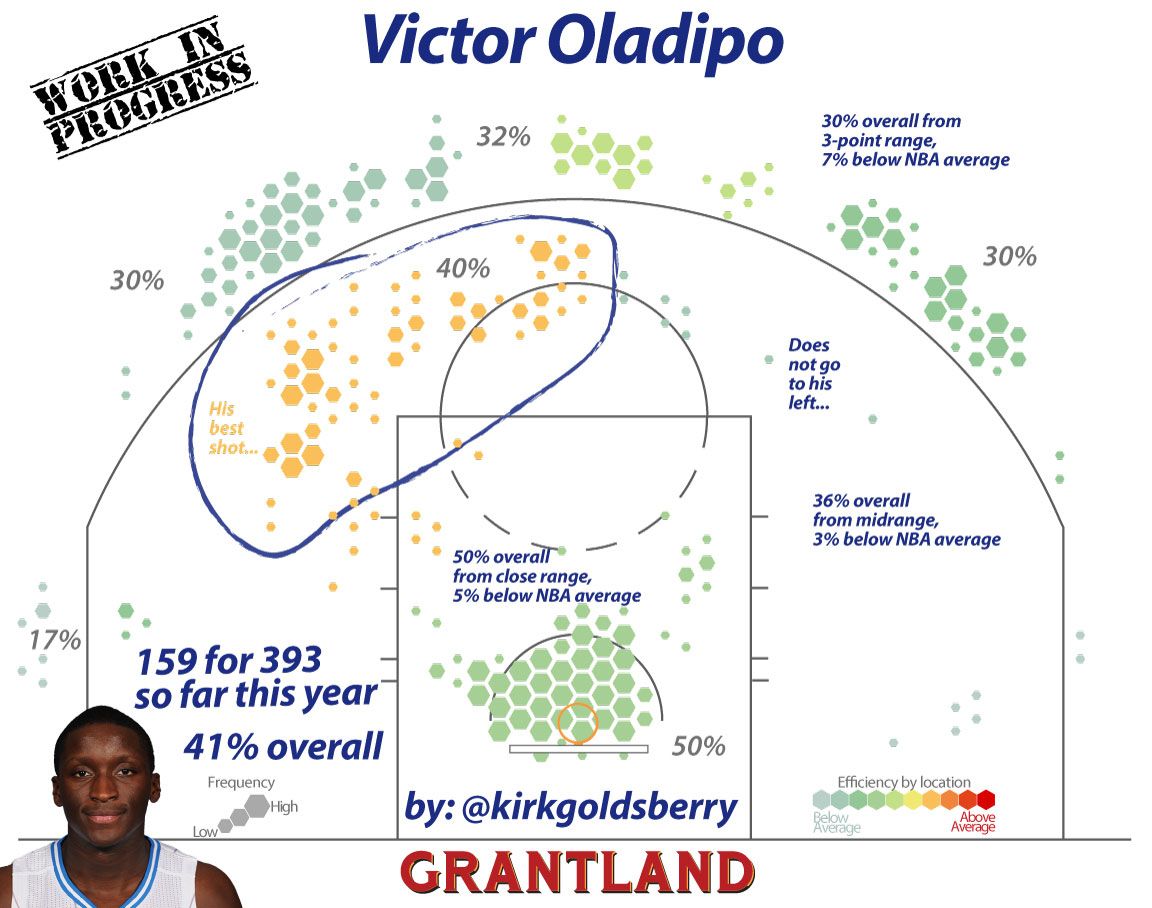 Like Oladipo, the Sixers’ Michael Carter-Williams is another very strong rookie performer who is having trouble scoring. In fact, though he is currently the favorite to win the Rookie of the Year award, Carter-Williams is having a very tough debut season as a shooter overall. 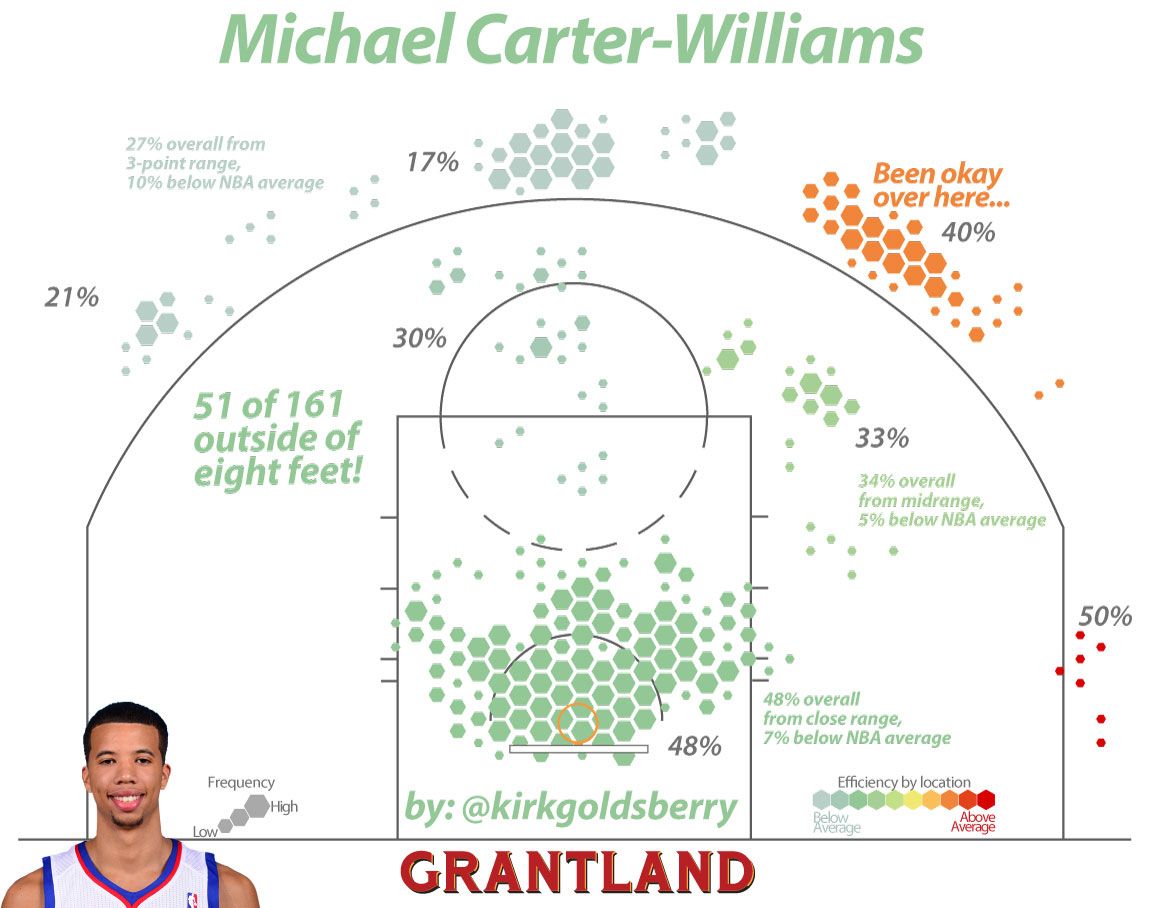 After a promising start, his efficiency numbers have plummeted. He has made less than a third of his shots outside of eight feet, and has been particularly bad from the top of the arc, where other point guards like Damian Lillard and Jose Calderon excel. More than any other team in the league, the Sixers should go out and find the best shooting coach in the world. Carter-Williams, Wroten, and Nerlens Noel are each potential stars, but their inability to shoot stands in their way.

Does Chip Engelland like cheesesteaks? Sam Hinkie should find out; Brett Brown should already know.

If you haven’t seen this, I guess we should start here:

Sometimes I feel like every column I write about bad shooting is a Lynyrd Skynyrd concert and the part where I rant about Josh Smith is “Free Bird.” Everyone knows it’s coming, but I have to do it anyway.

Last summer, I was very excited when Smith entered free agency; I felt that in the proper offense, under the right coach, and alongside the right teammates, something might click and his All-Star potential could finally be unlocked. I have always claimed that if Smith would only focus on offensive rebounding, attacking the basket, and operating on the blocks, he’d be a really great player.

I still feel that way, but Detroit is just not the place, at least right now. It’s an unstable situation, the offensive tactics are unclear at best, and with young bigs like Greg Monroe and Andre Drummond clogging up the paint there’s no room in the Pistons frontcourt. As a result, Smith plays the 3 too much, and in turn he’s taking even more jumpers than he did in Atlanta.

What if Smith had landed in a place like Dallas? Something tells me his chart would look different this year. But he’s in Detroit, and I may as well have copied and pasted this chart from his Atlanta days because it feels like a rerun, and this bird has not changed. 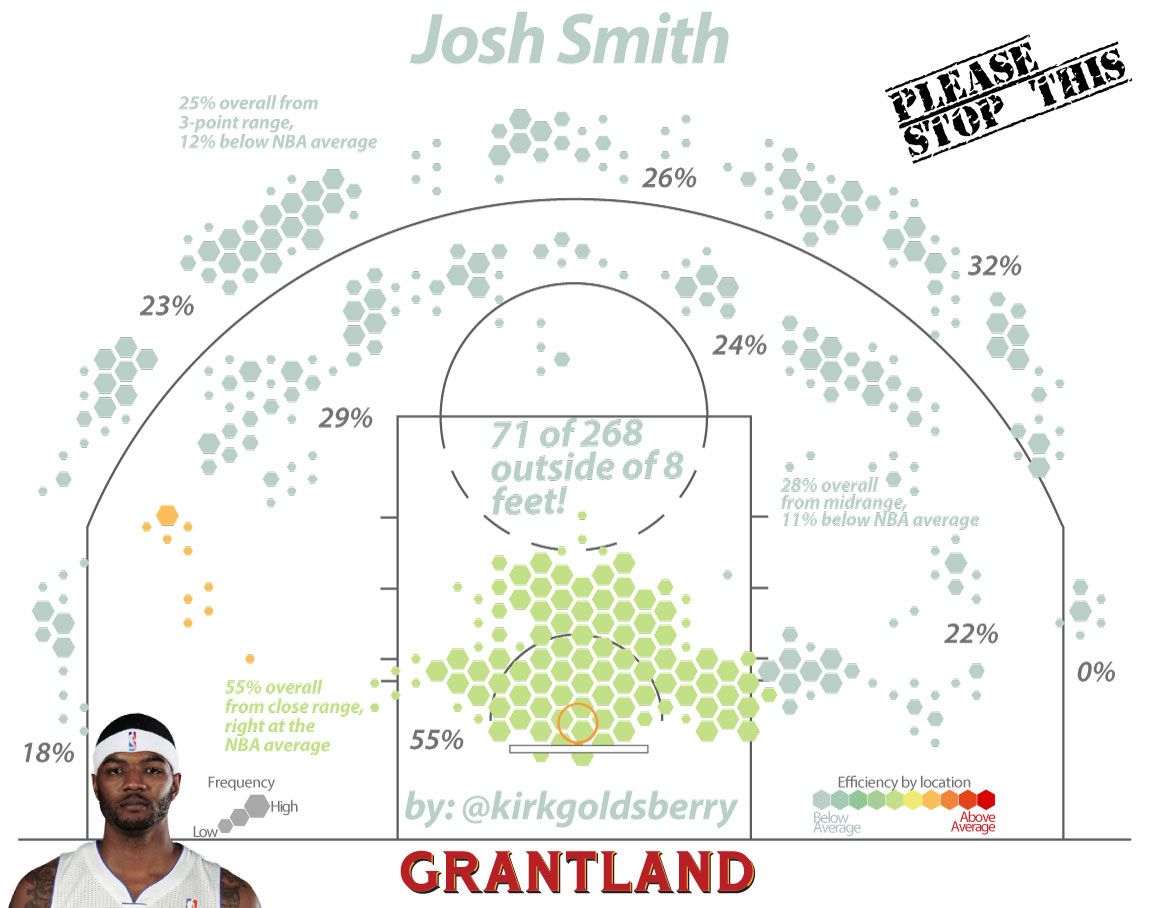 According to ShotScore, these are the five least-efficient volume shooters in the NBA so far this season. However, they are not alone, and some of these guys may very well shoot their way out of the cellar. If you’re looking for other bricklayers around the league, here are some other guys to watch: Rubio, Ramon Sessions, Cody Zeller, Jeff Teague, Brandon Jennings, and Jeff Taylor, who may actually be the worst shooter in the NBA right now. Although shooting is only one component of offense, it’s a really important one, and although these players all have lots of potential, their inability to convert shots is what’s preventing them from turning potential into reality.