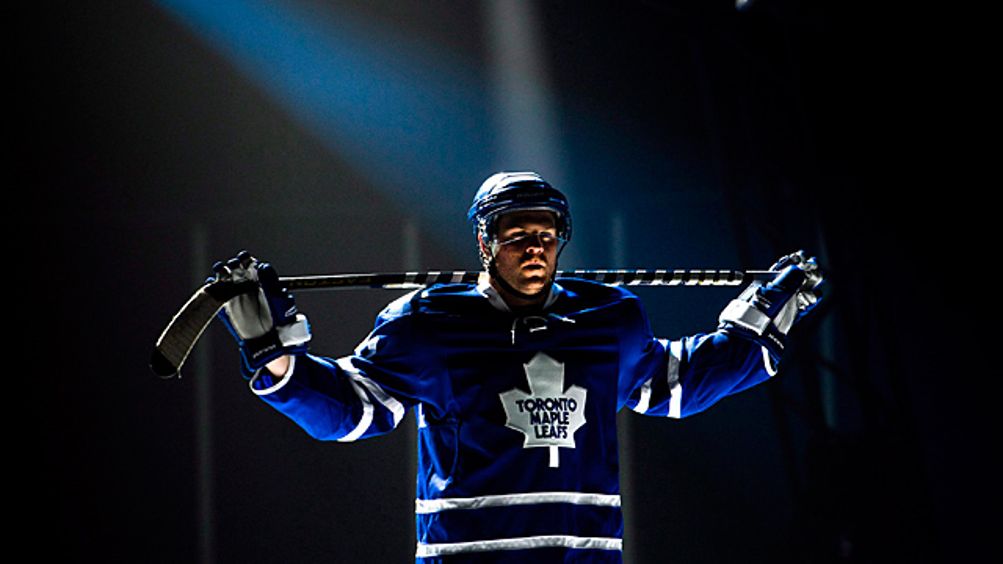 It’s a battle sports fans come to know well over the years. On one side, you have the relatively recent wave of advanced analytics proponents, using new types of stats and theories to challenge the conventional wisdom. On the other side are the old-school thinkers, many of whom have been around the game since before these stats guys were born and question how much insight can be pulled from a spreadsheet.

Hockey was late to the party, but the debate has arrived here, too. There have been some ugly skirmishes, often flaring up when a particular team’s on-ice results didn’t match what the numbers predicted. Every year seems to bring at least one example. In 2009-10, it was the Colorado Avalanche. In 2010-11, the Dallas Stars.1

Perhaps most memorably, the 2011-12 Minnesota Wild managed to lead the Western Conference for much of the season’s first half, despite horrible underlying numbers. The stats guys predicted doom. Wild fans scoffed. Insults were hurled. And in the end, the stats guys were right. The Wild plummeted all the way to 12th, missed the playoffs by 14 points, and firmly established themselves as the cautionary example for anyone who’d dare roll their eyes at hockey’s analytics community.

This year, we’ve moved into new territory, and the stakes suddenly seem higher. In any battle, real or metaphorical, things don’t get really ugly until you threaten sacred ground. And there may be no more sacred ground in the hockey world than the Toronto Maple Leafs.

Yes, the Maple Leafs, who face the Nashville Predators tonight, have become the new test case in the ongoing battle between old-school hockey thinking and a new-school statistical approach. And with all due respect to the Wild, Avalanche, Stars, and even last year’s Ducks,2 they are not the Leafs. They don’t have the same history, or the round-the-clock media coverage, or (especially) the same rabid fan base.

That’s why this year’s version of the debate is going to make the Great Minnesota Wild Dustup of 2012 feels like a warm-up skate.

Why do advanced stats hate the Maple Leafs? 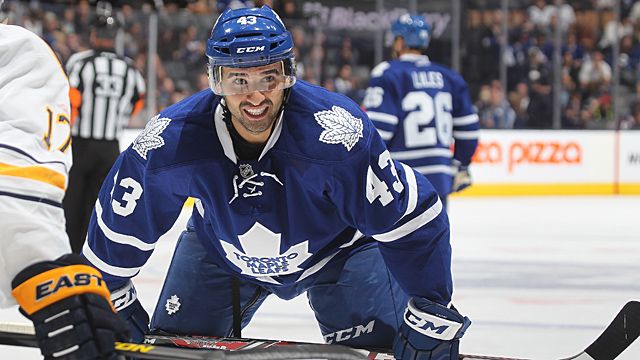 We walked through the basics of advanced hockey stats over the summer, but the key thing to know is that most of the work focuses on possession. Scoring and preventing goals may be the key to hockey, but goals happen infrequently enough that they get skewed by noise and randomness. So advanced-stat guys have turned to possession as a proxy and track that using new statistics with names like Corsi and Fenwick.

I can feel your eyes glazing over, so let’s stop there. It’s enough to understand that possession correlates to winning. The good teams have the puck more often than they let their opponents have it; bad teams spend the majority of the game chasing it. Organizations that seem to place an emphasis on puck possession, like the Kings and Senators, often outperform expectations.

It makes sense on an intuitive level, but it has also been borne out by various studies. For example, this visual guide to Fenwick demonstrates fairly clearly that good possession teams are far more likely to make the postseason and win the Stanley Cup, and poor possession teams usually miss the playoffs.

By virtually any measure, the Leafs are one of the worst possession teams in the league. Last year, they were outshot by more than five shots per game; when they made the playoffs, the Leafs became only the second team since the turn of the century to be outshot that badly and still qualify for the postseason.3 Stats like Fenwick and Corsi told the same story.

And the bad news wasn’t limited to possession stats. The Leafs had the league’s highest PDO, a stat that adds shooting and save percentages and can be a good indicator of which teams had the best luck.4 In his Hockey Abstract, Rob Vollman created a formula for measuring team luck that included PDO as well as injuries and other variables; he concluded that out of 150 teams over five seasons’ worth of data, last year’s Leafs team was the luckiest.

Percentages can be applied to individual players, too, like in this late-season article by the Globe and Mail‘s James Mirtle5 that examined the breakout season of center Nazem Kadri and concluded that it, too, was largely a product of good luck. Kadri was an extreme example, but other Leafs posted similarly unusual numbers.

So the advanced stats are virtually unanimous about the Toronto Maple Leafs. They’re a bad team, one that gets consistently outplayed and relies on luck to remain competitive. If last season hadn’t been shortened by a lockout, some argue, the Leafs probably wouldn’t have even made the playoffs. (The 5-seed in the East, the Leafs lost to the Boston Bruins in seven games in the first round.) This year, they should finish near the bottom of the standings.

It’s a convincing case, almost airtight, except for one thing: The standings say that the Maple Leafs aren’t a bad team. They were a top-10 overall team last year. And this season, they’ve won three of their first four games. It’s early, sure, but today the Leafs are tied for first overall.

The numbers say the Leafs can’t win, but the scoreboard keeps saying otherwise.

Could the Maple Leafs know something we don’t know? 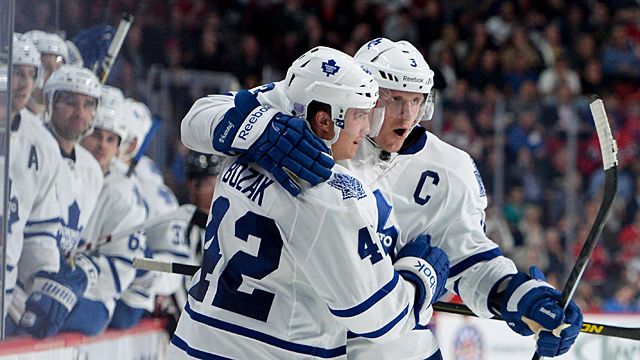 While some teams have incorporated advanced metrics and others seem to have largely ignored them, the Maple Leafs seem to shun them aggressively. In a league that’s moving toward new ways of thinking, the Leafs come across as almost defiantly old-school. Former GM Brian Burke, who built much of the current roster, was notoriously anti-stats,6 and replacement Dave Nonis seems to fit that mold too. If you were invited into the Maple Leafs front office, you’d half expect to see the walls covered with posters reading “Keep Calm and Corsi’s Wrong.”

It’s worth noting that the Maple Leafs themselves may disagree with that assessment. In a series of interviews with the Maple Leafs Hot Stove blog, various members of the Toronto front office and coaching staff made occasional references to modern analytics. But most of those fell into the category of vague assurances that the team knew what it was doing. When someone did get specific, their version of the facts was often quickly refuted.7

This fit a pattern, since the Maple Leafs spent the summer making increasingly odd statements. Tyler Bozak got extended because he’s such a great fit with Phil Kessel (he isn’t). Mikhail Grabovski had to be bought out because he wasn’t good enough to keep a roster spot (he was). Dave Bolland was weighed down in Chicago by poor linemates (he mostly played with All-Stars Patrick Sharp and Patrick Kane).

Every time a Maple Leafs employee opened his mouth this offseason, he’d leave the advanced-stats guys making the Eminem-in-the-football-booth face. If you didn’t know any better, you’d be tempted to conclude that the Leafs were intentionally trolling. Or maybe you’d just decide that they were incompetent. Many in the advanced-stats community have.

But again … there’s that one pesky detail — they keep winning. The Maple Leafs (and a large percentage of their fans) aren’t chalking that up to random chance.

Instead, it could be that the Leafs aren’t focusing on the same factors. For one thing, they place a strong emphasis on concepts like character and team toughness that numbers guys typically dismiss.

But more importantly, they claim they’re less worried about possession stats than they are about a different element: shot quality. The Leafs believe that the system they play under coach Randy Carlyle8 can’t be evaluated purely on possession metrics because it’s focused on limiting the quality of opponents’ shots while maximizing the quality of their own.

In other words, let the other team run around with the puck and pepper our net with shots from the perimeter; we’ll sit back, set up a quick-strike transition game, and make sure that the shots we do take are from more dangerous areas and have a better chance of going in. Quality over quantity, you might say.

It’s a theory that makes some sense. If the Leafs can dominate the shot quality category, then that would explain why they can be consistently outpossessed and outshot and still expect to win. And it would even explain away stats like PDO, since you’d expect their approach to be reflected in better shooting and save percentages. Needless to say, more than a few Maple Leafs fans have embraced this line of thinking.

There’s one problem: Advanced stats say that shot quality doesn’t exist. Or, more accurately, that it doesn’t exist as a repeatable phenomenon. There’s no statistical evidence that certain teams (or systems, or coaches) can maintain a shot-quality advantage over the long term. If one team — let’s call it, say … the Toronto Maple Leafs — has a stretch when it’s better in this area than others, well, that’s just good luck showing up again.9

So either the Leafs have developed a system that can do what the stats guys say is impossible, or they’re riding an unsustainable run of good luck that has to come crashing down sooner than later.

And with that, we seem to be at an impasse. 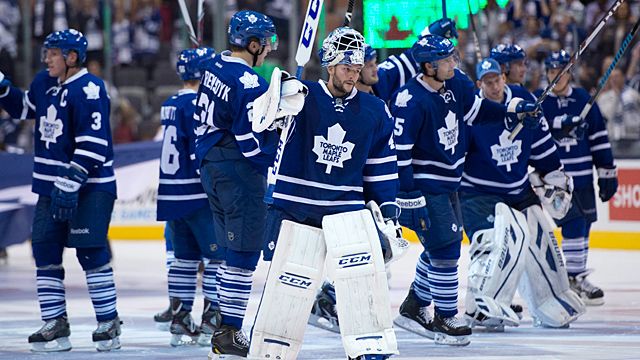 Each side of the debate is convinced the Maple Leafs are going to prove it right, which has left everyone practically giddy with anticipation over how Toronto’s season will play out. It’s an argument that’s happening right now around office watercoolers, in bars, and even in online sportsbooks.

The old-school crowd would love nothing more than to see the Leafs succeed again.10 Even some fans of other teams, who’d normally never root for the league’s most arrogant and overhyped organization, have taken to hoping Toronto can do just well enough to send the numbers folks scurrying back to debug their spreadsheets.

Meanwhile, the advanced-stats community can barely contain their excitement over the coming crash-and-burn that they’re convinced is inevitable. They’re expecting a repeat of their decisive win over Wild fans, only on a much larger stage. It’s not an exaggeration to think that Leafs losses could do for hockey stats what 2002 Oakland A’s victories did for baseball sabermetrics.

Here’s something on which both sides can agree: If you’re even vaguely interested in the ongoing debate over the future of hockey metrics, the 2013-14 Toronto Maple Leafs are the test case you’ve been waiting for. They are the canary in the advanced-stats mine shaft. And that makes them this season’s most fascinating team.