The Economics of Moneyball 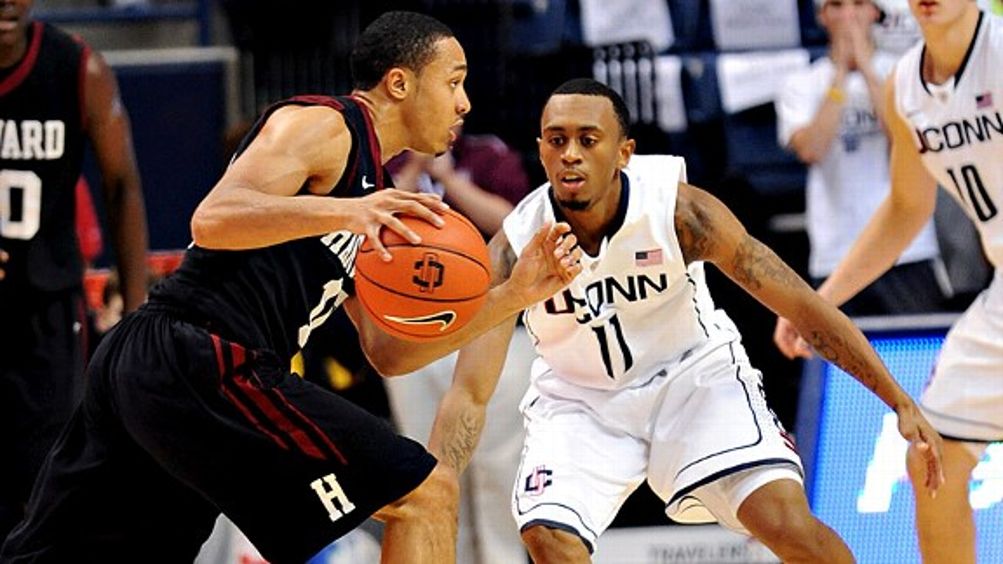 Tonight I had one of the greatest moments in my life as a sports fan. Although no. 24 Harvard lost to no. 9 Connecticut 67-53, for the first time ever I was able to root for my own alma mater in a major college sporting event on national TV.

The rise of Harvard basketball into the Top 25 is both awesome and mind-blowing. As an Ivy League school, Harvard cannot offer any athletic scholarships. Athletes who want to go to Harvard must meet a rigorous set of academic criteria to get admitted — certainly rigorous by the standards of most sports-oriented Division I schools. Harvard has no athlete dorms or special dining halls. No under-the-table perks. Being a student-athlete at Harvard requires doing serious academic classwork. So how does Harvard compete with the top teams in the country? It doesn’t. Not in basketball or football. Which is why the rise of this team is so extraordinary.

I have been to many Harvard varsity sporting events where I’ve been able to personally introduce myself to all the fans in attendance. Earlier this year I went to a Harvard football game and breezed right into the stadium without a ticket — this for a team that went 9-1 and won the Ivy League championship.

This has meant that for my entire post-college life I’ve had to seek out surrogate schools to support. Earlier this fall I went to Ann Arbor for the Nebraska-Michigan game and was packed in the Big House shoulder-to-shoulder with 109,000 fans rooting for the Wolverines. It was incredible to be there, but afterward I felt a certain emptiness because I wasn’t really a part of it. I didn’t go to Michigan.

When I watch college sports games, I am forced to pick sides as opposed to having a team I can truly call my own.

I tried rooting for some of the very few Harvard athletes who make it into pro sports. One of them was Neil Sheehy, who graduated from Harvard the year after me and then played hockey for the Calgary Flames. One night when he was in town with the Flames to play the Kings, we went out afterward to a bar with a bunch of his teammates. Despite being one of the toughest defensemen in the game at the time, even his teammates couldn’t get past the incongruity of playing with a Harvard guy. They called him “Harv” or “Sir” more and more often with each drink that was downed.

More recently I tried following Matt Birk, a Harvard grad who plays center for the Baltimore Ravens. But let’s face it, it’s just not easy to root for a dude who plays center. In the same category is Jeremy Lin, who plays off the bench for his hometown Golden State Warriors. Admirable, yes. Exciting for me, no.

Then a bolt of lightning struck. The clouds parted and Ryan Fitzpatrick emerged — a Harvard guy quarterbacking an NFL team. It seemed too good to be true. I embraced Fitzpatrick, thinking that as a Harvard fan this was as good as it ever was going to get.

Then the basketball team began its season. I ran into the team at the airport, at LAX, when I went to pick up my daughter. The Crimson were in town to play Loyola Marymount, and they won. And Loyola Marymount had just beaten UCLA. Still, I didn’t get my hopes up. Until they beat Utah. Then they toppled Florida State. And then three more wins took them to 8-0, and for the first time in school history the Crimson were ranked in the top 25 in the national polls.

I began to care about Kyle Casey and Keith Wright, in the way Florida fans revered Tim Tebow or Oklahoma fans lived for the triumphs of Blake Griffin. I knew I was fully hooked when I started having anxiety dreams about which big-time college program would steal away brilliant coach Tommy Amaker. For the first time ever as a collegiate sports fan, I felt like I belonged.

The goal for the Harvard team is to make it into the NCAA tournament. That, of course, would be another first and a major milestone. In the Connecticut game, Harvard was down by only two at the break. Although Connecticut pulled away in the second half, Harvard played a tough and worthy game against the defending NCAA champion. Even when the game fell out of reach, I still yelled, “Go Crimson!” at my team on ESPN, and I did so with pride.

Carlton Cuse most recently was showrunner of Lost and graduated from Harvard in 1981.