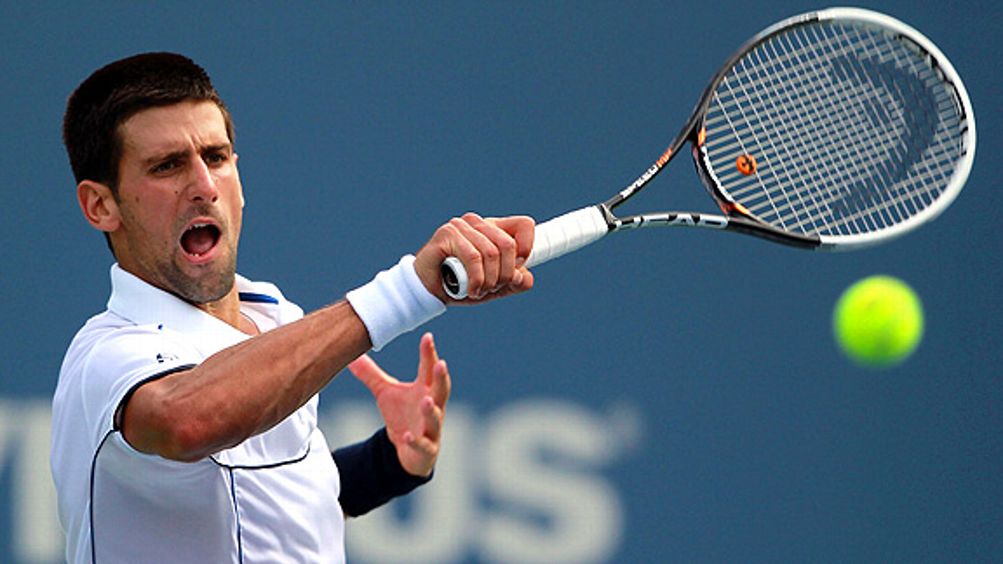 There are athletes who make you worry whenever you see them play. I’m not talking about a specific, directed, rational worry — maybe he’ll lose, maybe he’ll get injured, he always chokes on break point. The worry I have in mind is vague and atmospheric, a general sense that the carpet is about to be pulled out in an unforeseeable way. This has nothing to do with whether the athlete is winning or losing. It’s not that consequential. The whole time you’re watching him, there’s just a tiny, unstoppable news ticker feeding a message across your brain: OH MY GOD IT’S NOT OK HE’S NOT GOING TO BE OK.

For me, Novak Djokovic is one of those athletes. It doesn’t matter how systematically he wrecks his opponents, how hard he whips his forehand, or how gaudy his record gets.1 Whenever he’s on the court, I get that news-ticker feeling. This is absurd, given that tennis is a job that he’s overpoweringly well qualified to do, but I spend a good part of Djokovic’s matches half-consciously wishing I could protect him.2

I don’t know why I feel this way, but I have an idea, which is that Djokovic seems like a real human being. Of course they’re all real human beings, athletes, but often the best ones don’t quite seem that way. It takes almost pathological levels of dedication and competitive will to reach the top tier of a major sport, and years of cultivating those qualities tend to make star athletes seem like either androids (Pete Sampras, Peyton Manning) or savage punishers from space (Rafael Nadal, Dwyane Wade). Others wind up in some glossy celebrity nowhere (early Andre Agassi) or become “icons” (late Agassi) or start to look like wax-museum figures of themselves (still late Agassi). You care about them, you root for them, but there’s some essential way in which they are unlike you.

And then there’s Djokovic. Here’s a quick rundown of his U.S. Open so far:

Because he has a sense of humor and plays to the crowd, Djokovic is frequently called a “showman.” This is exactly the wrong word. A showman in sports is someone who plays a character, either for a tactical advantage or to get noticed. Muhammad Ali was a showman. His objective wasn’t to make you like his jokes; it was to make you watch. (And, at the same time, to get in his opponent’s head.) Djokovic, by contrast, seems like somebody who just thought of something funny and wants to share it with you. He isn’t portraying an exaggerated version of himself as a ploy to get your attention. He’s more or less just being himself, which, in sports, is an altogether rarer thing.

The question is, I guess, whether it’s possible to be yourself in public and still be a great athlete. I always feel like Djokovic is in some obscure peril because, going back at least to the moment when Michael Jordan began answering questions like a calculator being interviewed by a fourth-grader,3 I’ve had the impression that modern sports culture won’t tolerate sustained human genuineness. Your opponents will burn you for it — can you imagine how MJ would have ruined a guy who danced a jig on the court? — and the media will tear out your entrails the moment they smell blood. Half the scandals in sports result from the bizarre, half-real compensations athletes carve out on the margins of their otherwise unreal lives. Tiger Woods was essentially the human equivalent of an undeleted browser history. I don’t want to see anything like that happen to Djokovic.

Of course, all of this is completely paranoid, because at the moment Nole is everybody’s favorite guy. After Wimbledon, where he outlasted dodged Roger Federer and decisively beat Nadal, his magnificent season stopped looking like a nice little run and started looking like the golden blaze of history. Since then, he’s been romping through his here-comes-success phase, just cruising in a halo and winning smiles everywhere he goes. He got a watch sponsorship. He gazed intensely into a lot of cameras. On Leno, he sprawled out on the guest’s chair in a tie so loose it was practically dating Tiki Barber. And the tennis has been equally golden. His game is full-stop amazing right now — imagination working with power working at speed.

Against Berlocq, Djokovic was so dominant that, after winning the first set in a princely 20 minutes, he blew up at himself during a changeover for dropping two games in the third. Trailing 1-0 in the second set and losing all hope of ever holding his serve, Berlocq played finicky drop shots on two straight points. Djokovic charged them down, sliding on the hard court in that freakish trailing-leg-bent-halfway-to-Belgrade way he does, and smashed them both back for deuce-court winners, picking the same spot each time as if he were trying to keep himself entertained. Two games later, with the overall match score now at 9-0, Nole played two alternate-side drop shots in the same point, moving Berlocq around like the dot of a laser pointer. “He’s toying with him,” John McEnroe murmured. If you analyzed the footage, you’d probably see that Djokovic was writing his name with him.

So really — and this is what I tell myself when I’m worrying about him — everything’s fine. Except, am I wrong, or is there some barely perceptible grimness to the Djoker these days? He’s having fun, but there’s an undercurrent of stress in the way he comports himself. That’s nothing new — he’s always been tightly wound. Since Wimbledon, though, he seems subtly different. His quick-change facial expressions have been replaced at times by a kind of hazed-out sullen glare. At times he looks mad, and mad’s not an obvious fit for him. I wouldn’t say he’s burnt out, exactly. But being the king changes your sleep patterns, and blasting everyone to smithereens is a rough job for a player who, like most real people, wants to be liked as well as admired.

And that may be why I’m worried. I get the sense that, unlike Nadal, Nole’s not entirely comfortable being RoboCop, even if his racket operates like a bionic extension of his arm.4 He’s a friendly guy who’s aware of how he’s perceived, and unlike Federer, who coolly assumes that the world exists to appreciate him, Djokovic needs some reassurance. Tennis is a relentless occupation, and when you’re the sort of kid whose eyes are always flicking one way or the other to see how people are responding to you, the grind at the top can wear you down. He’s been talking more about “responsibility” lately, as in “I’m aware of the responsibility that I have as a present no. 1 to represent the sport.” He’s been framing his fun-loving side as an escape from the un-fun routine of the game: “People don’t even realize the free time that we don’t have, things that we are sacrificing to be here. Whenever I have the opportunity to experience something else, why not? I enjoy it.”

So everything’s fine, but I’m still anxious, because his (admittedly incredible) game is the only thing keeping him from being toppled, or hardened, or hurt. He’s a great bet to win this tournament, even though his semifinal opponent will be Federer, who beat him last this year at Roland Garros. But even assuming Djokovic’s reign lasts beyond the weekend, there will still be questions left to answer. Can he shift his head into a gear that will make him implacable? Or will that little record-skip that you sometimes hear in his brain finally break the needle?5 There’s also the possibility that he’ll dominate for years and win a stack of majors without ever turning into a sports caricature or a self-protective blank. That really would be incredible.

Previously from Brian Phillips:
The Brash Style in American Tennis
When We Need Our Barbarians
Corruption, Murder, and the Beautiful Game: On FIFA’s scandalous history
On the Border: A look at the soccer rivalry between the United States and Mexico
Roger Federer, Novak Djokovic, Pete Sampras and the dead kings of Wimbledon
The Long Autumn of Roger Federer