Chris Paul on the Clippers-Lakers Rivalry 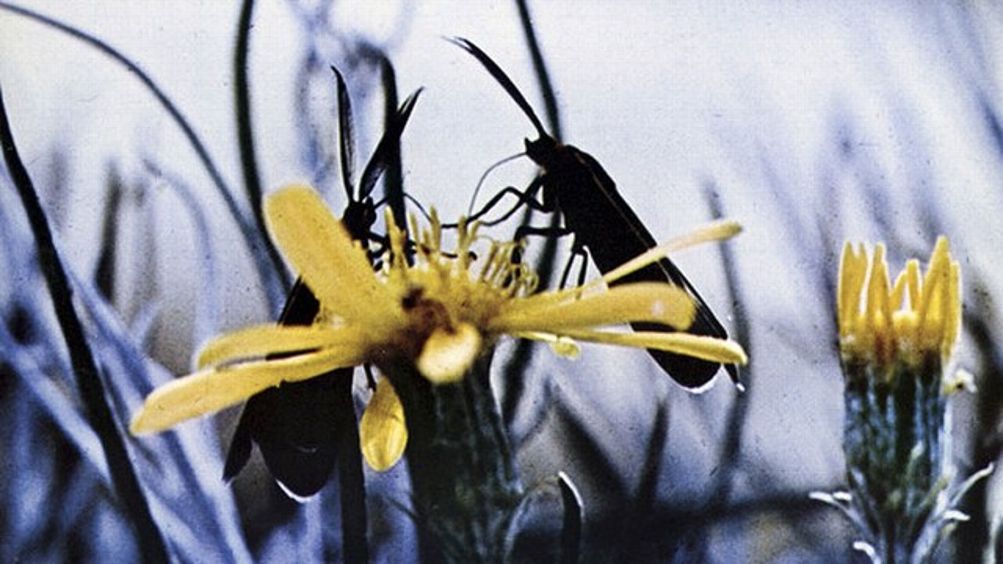 Last summer, a moth from St. Louis installed itself in the right ear of Matt Holliday. The Cardinal left fielder was removed from the game, and the moth from his ear, but not without difficulty. They were both taken to a dark room in the clubhouse where a doctor unsuccessfully tried inveigling the creature by penlight. Then came the tweezers, sacrificing the moth’s aerial equipment in the process.

Though invasive, the incident was fairly mild in terms of major league lepidoptera attacks. In a 1985 game between Pittsburgh and Philadelphia, Pirate third baseman Bill “Mad Dog” Madlock inhaled a moth and missed the throw to first by a mile. Talking to Sports Illustrated, Phillies catcher Ozzie Virgil said that night at Veterans Stadium was like playing in a “furry blizzard,” as if the moths were rioting for more 1,500-watt bulbs.1

Moths can have babies in your clothes, in Astroturf, and, incredibly, under piano keys, but for the most part they are benign creatures. More humans have been endangered by flame-drawn moth similes than by moths themselves. Yet the moth never appeared more menacing than on the marquee poster for The Hellstrom Chronicle, an insect apocalypse that received an Oscar for Best Documentary Feature in 1971. Originally released in the guise of an ecological horror film, it’s now available on Blu-ray, so you can watch ants dismember each other to free jazz. (The lost head of a red soldier, its antennae still twitching to the beat, is a nice touch.) One critic called it “ideal and ingenious family entertainment … full of sex and violence.”2

Actor Lawrence Pressman — who has the distinction of appearing in both Shaft and Doogie Howser, M.D. — plays Nils Hellstrom, an entomologist defriended by the scientific community for choosing insects over mankind, and for planting bugs in the supermarket produce section. According to Hellstrom director Walon Green, some denounced the film for its use of a fictional narrator, claiming Green had “desecrated the documentary realm.” (After losing the intended real entomologist to hepatitis, producer David Wolper reportedly yelled in a meeting: “We need a scientist! But not a stupid scientist!”) Writing in the New York Times, Vincent Canby called the narration “asinine.” To Hellstrom, termites are “particles of information,” and insects “infect the sky.” These kinds of observations are made while spying on couples at a drive-in, or gunning down a hornet’s nest with a pistol hose. (In slow motion!) There’s Hellstrom, smirking around Nevada’s radioactive proving grounds, musing on the insect’s ability to adapt: “creating specters as limitless as the imagination of the insane.” (The insane have been promoting entomology ever since R.M. Renfield was popping flies in Dracula.) Walon Green, who produced TV shows like ER and Law & Order, called it “almost yellow-journally but good. We were giving the audience an elbow to the ribs every third line.”

If you dare think this is lunacy,” hisses Dr. Hellstrom, “I invite you to learn the inevitable destiny of ignorance.”

The Hellstrom conspiracy began in the early 1960s, when David Wolper sent Walon Green undercover to document fugitive Nazi officials in South America for the TV series Time Marches On. For a segment titled “Searching for Vengeance,” they pursued a lead on Martin Bormann, the head of Hitler’s Party Chancellery then rumored to have surfaced in Argentina. But Green made a larger discovery. While posing as a filmmaker documenting German farming compounds, he found proof that Josef Mengele, the Auschwitz “Angel of Death,” was still alive and in Paraguay. (Mengele’s family owned a farm-machinery business with financial ties in South America.) After getting his stories crossed, Green drew suspicion from his sources and had to escape by hitching a ride on a crop duster across the Paraguay River to Brazil, where he met a German entomologist.

As Israeli Mossad agents and West Berlin authorities continued the hunt for Mengele in the Triple Frontier, Green, a naturalist of sorts, went bug collecting in Rio. He learned that insects would outlast man and that adaptation held more survival appeal than intelligence, not to mention stupidity, and decided to make a documentary on how insects would outlast man. Wolper loved this idea. According to Green, Quaker Oats was going to sponsor The Hellstrom Chronicle but withdrew, fearing that insects — despite being an excellent source of fiber — would be cross-branded with America’s top oatmeal. Wolper, then in the middle of producing Willy Wonka, would pre-sell it to ABC, while he and Green funded the rest themselves.3

Though Martin Bormann was never found, his photograph appeared in Willy Wonka, identified as a Paraguayan billionaire that bootlegged the fifth and final golden ticket. Wonka was adapted for the screen by Hellstrom writer/Omen author David Seltzer. (Roger Ebert’s comparison of Hellstrom’s frizz to Willy Wonka was pure coincidence.) Revisit the Wonkatania boat tunnel scene — after Violet Beauregarde loses a finger up her nose and cries, “What is this?! A freak-out?!” — and you’ll catch a glimpse of Walon Green with a giant centipede crawling on his face. This is the one insect that makes Green squeamish, a creature that can intercept bats in mid-flight.

“When we talked about Hellstrom, the only one crazy enough to do it was Wally,” said David Wolper, during a conversation we had by phone in 2003. “Wally was the perfect guy to go into the middle of Africa looking for ants.” Wally also didn’t mind sharing his cucumber salad with the Jerusalem cricket that often lunched with the film crew. (One supposes Green had to be at least half-nuts to write The Wild Bunch screenplay between Nazi hunting and chasing rare arthropod queens in Narobi.) Unfortunately, you get none of this from the Hellstrom DVD. The lack of special features is a squandered opportunity to fawn over the film’s ingenious macrophotography, shooting actors who, as Wolper put it, “just do what they do.” The opening scene of David Lynch’s Blue Velvet, with insects brawling in the front yard, is pure Hellstrom in its scope. It’s like feeding Honey, I Shrunk the Kids to Them.

The Hellstrom Chronicle would also mark the first time an insect had been filmed flying in a high-speed frame. “The shot only lasts for a second,” says Green. “It’s like filming bullets.” For the bee to comply, it had to be knocked out with CO2 and wear an invisible harness fashioned from black widow web threads. (So, what did you do at work today?) The bee then awoke to a strobe light and a tiny breeze on its rear, which essentially fooled its sensory apparatus into flying. The result is NFL Films for bees.

Shooting ants provided a different challenge. “We got really munched on,” said Green. The crew was nearly eaten alive when filming the African driver ants on the march, often taking breaks to jump in a nearby river. (Unfazed, the ants would merely build a bridge out of more ants.) Yet it’s the insectivores that nearly steal the show, as Green sticks a colonoscopy lens up into a cobra plant, essentially placing us in its throat so we can watch it digest a honeybee.

The sound design had to live up to the supersize imagery, which at times seemed to be satirizing the jumbo-ant neuroses of 1950s science fiction films. “Insects have ears on their legs,” says Green. “They are so functional and practical that they hear only what they need to hear.” In the case of The Hellstrom Chronicle, the bugs were hearing a lot of reverb. Mics were plugged directly into leaves to catch the footfalls of beetles. Lalo Schifrin — who composed the theme to Mission Impossible, and studied entomology in Argentina — was hired for the soundtrack. Using a new species of tape delay called the Echoplex, Schifrin created some of the grossest eating noises ever heard on-screen, showing creatures that have no compunction about chewing with their mouths open.

According to Nils Hellstrom, the insect’s appetite without conscience is just one of the threats posed to mankind. Yet the film neglects the insect’s positive contrbutions to society, like honeybees’ use for bomb detection. Or how the blowfly can be a forensic specialist, brought in for homicide cases to help establish time of death. (The necrophagous are often first at the scene.) Apparently, maggot brains could be found in criminal minds as well as in nine-minute Funkadelic guitar solos.4

Then there’s all that ecological balance stuff, separating the insects from the pests. In his 1914 book, Insects Injurious to the Household and Annoying to Man, Glenn Washington Herrick considers installing a hornet’s nest in the kitchen to get rid of houseflies. (Something to think about, anyway, the next time a fly happens to crap-land on your sandwich.) Some major league bullpens have their own ideas about pest control; bored relief units have been known to bite the heads off locusts and grasshoppers — further proof that pitchers are the biggest weirdoes in baseball.5

The locust air raid on a village in Kenya is one of Hellstrom‘s more harrowing scenes. During filming, Walon Green smuggled some of these crop assassins back to California in a film canister. He remembers his producer being horrified. Green chuckles. “Apparently, it’s against the law to start a plague of locusts in the state of California.”

Dave Tompkins’ first book, How to Wreck a Nice Beach: The Vocoder From World War II to Hip-Hop, is now out in paperback on StopSmiling/Melville House. Born in North Carolina, he currently lives in Brooklyn.

Previously by Dave Tompkins:
Label Conscious: The Ghosts of Def Jam’s Past