Wedded Blitz! Eye of the Tiger 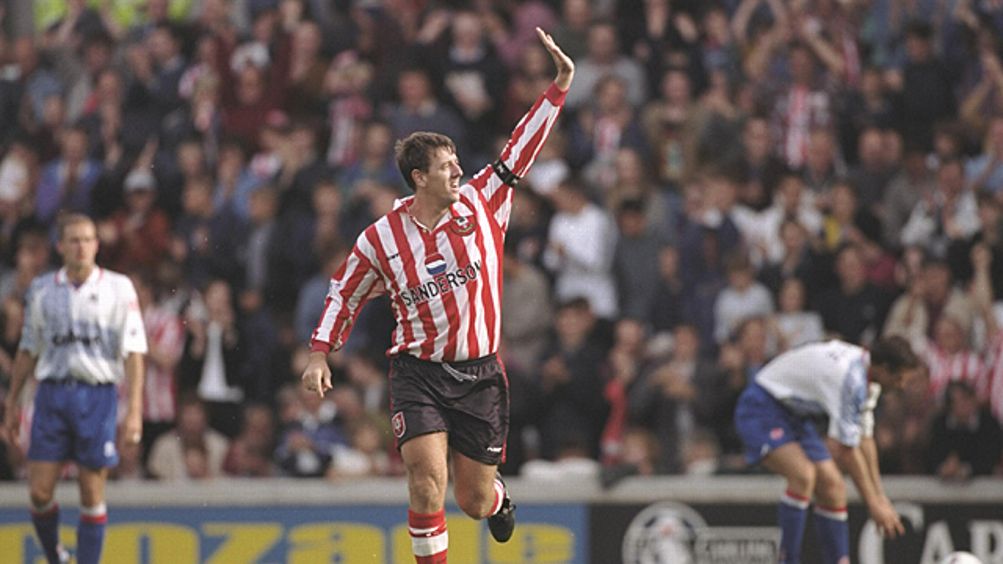 Matt Le Tissier is coming out of retirement, and I’m going to type that again, because it contains words that deserve to be repeated. Matt Le Tissier is coming out of retirement. If you don’t know who that is — and there’s a good chance you don’t, if you’re American, not a soccer fan, or under 25 — watch the YouTube clip of him scoring against Newcastle on October 24, 1993. This is the second season of the Premier League, all lunging tackles and signboards for Street Fighter II. Le Tissier’s playing midfield for Southampton, the team in red-and-white stripes. The ball comes flying over the left flank to the Southampton striker, Iain Dowie, who heads it down toward the middle of the pitch, where Le Tissier’s running forward at a smooth trot. It’s a bad header; the ball scuds directly behind him. The move should be over. But watch what Le Tissier does. Somehow he sort of skip-glides to a stop and flicks the ball up over his head with his left heel — a behind-the-back pass to himself. As he’s running onto it, he sees that there’s a Newcastle defender about to smack it out of the air, so he does this little elegant kick that pokes it 12 feet forward, out of the defender’s path, right to the edge of the area. Newcastle’s big defender Kevin Scott is converging on the spot, so as Le Tissier catches up to the ball, he flicks it up into the air again, right over Scott’s head. Then he runs around Scott, meets the ball in the middle of the area, and hits a low shot past goalkeeper Mike Hooper into the net. The whole move looks choreographed. It’s one of those goals where you’re just … he couldn’t do that. Between the moment Le Tissier takes the pass and the moment he shoots, the ball touches the ground one time.

In his own highlight clips, he’s such a weird presence. English football during his peak years — he played 540 games for Southampton between 1985 and 2002 — was not known for fostering fine technique. It was a game of hard tackling, long balls, and angrily feathered hair. Look, it’s simplistic, but here’s a way to take in his era. 1985: the Heysel Stadium disaster, grim depths of hooligan panic, English football banned indefinitely from European competition. 2002: Arsenal wins its second double under Arsene Wenger. Le Tissier was a decade ahead of the stylistic revolution brought about by the Bosman ruling and satellite TV. In the clips there’s something almost spectral about him: all these ruddy, granitic bruisers out there cudgeling each other to death, and then suddenly here comes a guy who’s just dancing through them, who looks like he’s flickering in from two channels up on the dial. He’s not small, but he looks fragile, maybe just because his way of moving seems so delicate. You feel instinctively that they would destroy him if they could catch him. And he’s Pete Maravich, or maybe Robin Hood, making a game out of not getting caught. When he finally slips through and scores, you get a jolt of what’s to my mind the best feeling in all of soccer, a feeling that the game’s evolution toward technique has made paradoxically rarer: the feeling of something beautiful triumphing over something strong.

Anyway, that’s who he is. Sly, sinuous Xavi, Barcelona’s brilliant playmaker, has said that Le Tissier was one of the models for his own game. “He could simply dribble past seven or eight players,” he’s said, “but without speed — he just walked past them. For me he was sensational.”

Le Tissier is now 44. He hasn’t played in 11 years. He’s coming out of retirement.

Do you know what a bailiwick is? I didn’t. It’s an area under the authority of a bailiff, and in modern British usage, it refers to two groups of islands in the English Channel, Jersey and Guernsey, which are Crown dependencies despite being just off the northern coast of France. Culturally, they’re complicated, hybrid; English and French are both spoken there. Le Tissier was born and grew up in the Bailiwick of Guernsey, so right off the bat — in his name itself — you see the central tension of his career, how he’s English but also provocatively close to something not-English, like an advance warning of globalization.

The population of the bailiwick is only about 63,000, but somehow it has its own Football Association, which maintains more than a dozen community soccer teams across a two-tiered league system. In 2011, the Football Association founded a new club, Guernsey FC, to give the bailiwick’s best players a taste of higher-level competition. Guernsey FC entered the Combined Counties Football League, which plays games in England, eight tiers below the Premier League soccer pyramid. The club named Matt Le Tissier its honorary president. Guernsey won the CCFL’s second tier in its first season and also won the league cup tournament.1 This year, in part because of weather delays, in part because the club is continuing to kick significant ass upholding the pride of the bailiwick, it has to play 17 games in April, which, yikes. You need a ton of extra players to be able to get through a stretch like that without people’s legs literally falling off and the club having to buy a dump truck to cart little piles of legs off the pitch after every game, which would wreck the whole budget. So some bright egg went, Hang on, didn’t our honorary president used to play the game in a not totally embarrassing, maybe even era-transcending way?

So, yeah. He’s not coming out of retirement at 44 to play for Manchester United, or even Southampton, which is currently hanging tough at 11th in the Premier League. He’s coming back to give four or five games to an obscure local club that he cares about, which only seems less cool until you think it over for five seconds. (Imagine if Barry Sanders suited up for some tiny struggling football team in Wichita. You wouldn’t watch that movie?) “It’s where my childhood memories are,” he’s said. He’s starting on Sunday, because he won’t play Saturday games, because they’d interfere with his gig as a TV analyst. The media’s treating it as little news, not big news, and understandably.

It’s big news, though, or it should be. It’s big news because it’s a chance to revisit the career and legacy of a player who has never gotten his due from either fans or the soccer establishment. Remember how I said there was a good chance you’ve never heard of him? A startling number of people haven’t. His career fell during one of the most wrenching transformations in the history of English football — the shift from soccer as a locally based sport with its roots in working-class communities to soccer as a big-money game whose major point of access was television — and during an era when England’s failures at the international level were even more traumatic for the nation than they are today, if that’s possible. And somehow he was on the wrong side of all those historical fault lines: He played for Southampton, a club the Sky Sports audience didn’t much care about, but his style was so frilly that it nullified any role he might have fulfilled as a champion of blue-collar clubs. He succeeded by flouting the classic English virtues of robustness and directness, but at the same time he never played well for the English national team. Eight appearances, zero goals. He’s beloved by millions of happy fans, but there’s also a strong current of opinion in England that he was a big-fish/small-pond player too lazy or soft to cut it in the trenches against Germany.2 I mean that as a soccer metaphor, probably.

But this whole line of criticism is nonsense. You don’t think Xavi maybe knows who can and can’t play soccer? You don’t think Xavi can maybe eyeball talent about as well as Glenn Hoddle, the England manager from 1996 to 1999, who elected not to bring Le Tissier to the 1998 World Cup? England went out on penalties in the second round against Argentina that year, blithely unsaddled of one of the greatest penalty takers in the history of the game.3 If anything, Le Tissier is a living argument for why international success is an unreliable standard for judging soccer players. Pele, luckily for him and for all of us, happened to play for a Brazil team that perfectly meshed with his talents; when the same roulette wheel spun for Le Tissier, he wound up on an England team that thought Alan Shearer was a flair player. He was a Venusian suiting up for Mars United. They didn’t have a clue what to do with him.

Watch that video one more time, and trust your heart if you won’t believe your own eyes.