The Resurrection of the Royals 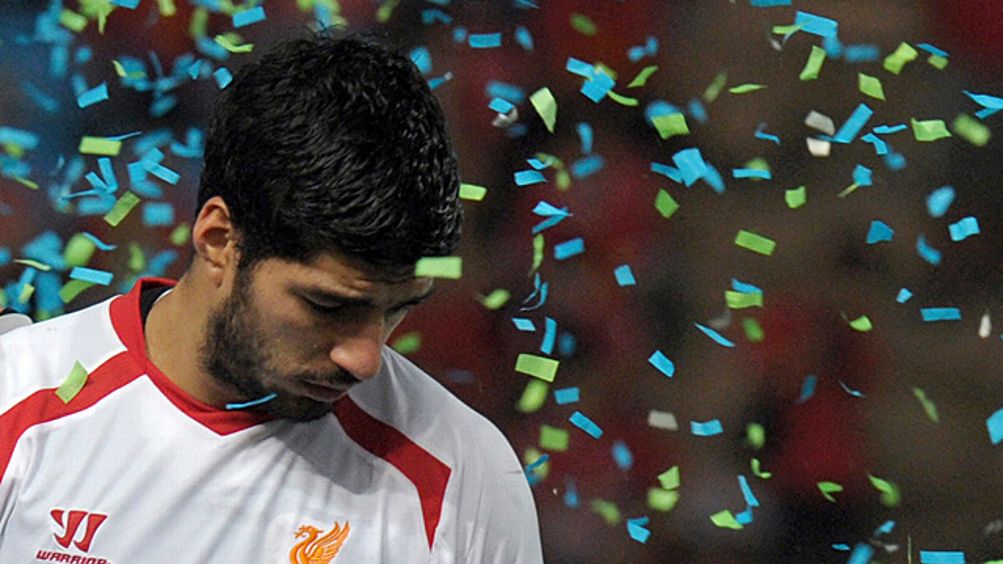 The world turned. The seasons passed. Luis Suarez watched the universe from the stands, scowling and wearing a suit. When God looked elsewhere, however, Luis Suarez would sometimes contrive to interfere with the doings of mortals. This violated the terms of his suspension, but Luis Suarez believed that tampering with the progress of history was cheating only if you got caught.

And so Luis Suarez bit the wheat crops, and famine spread across the land. Luis Suarez stood on the goal line and batted down the seed of a king before his queen was with child, and turmoil darkened the nations. Luis Suarez called Agamemnon, ruler of the Mycenaeans, a name that was offensive to his people, the Achaeans, and this pretty much wound up starting the Trojan War, even though Luis Suarez insisted that where he came from it was a compliment.

From time to time God would catch Luis Suarez performing such deeds of wickedness, and God would be beyond wroth, if you can even picture that, and extend the length of Luis Suarez’s ban. And lo, at such times Luis Suarez would apologize, but then later it would turn out that he’d been making all these other comments in the Uruguayan media about how maybe he’d just transfer away from God’s club altogether. And thus Luis Suarez became known as the Father of Utter B.S., and a great hatred for Luis Suarez took root in the people’s hearts.

The reporters who covered the daily twists and turns of heavenly transfer chatter gathered in their pubs, and spoke in mighty council, and agreed among themselves that it was all a terrible shame. For Luis Suarez was favored among players, swift as the gazelle of the fields, strong as the ox of … a different kind of fields, and sure-footed as the ibex of wherever it is those guys live, possibly mountains, the reporters weren’t sure, but they’d already committed to the metaphor, you know how it goes, and he would be delightful to watch if he could only quit being a douche and remain in the dimension of corporeal existence.

There came unto the court of the Lord a hermit in a puffy cloak, who called himself Arsene of the Emirates. This man bore great treasures, hoarded over years whose number was as vast as the grains of sand in the desert, and he made an offer unto the Lord. “If thou renderest unto me Luis Suarez,” said the man, “then shall I render unto thee £40,000,001.”

And God thought it was weird, the specificity of that number, and especially the way the man counted it all out, then skinned the last pound off his cash roll and said, “For your trouble.” But what could you do, sighed God. People had been like this since Luis Suarez talked up the appeal of biting to Eve and so brought sin into the world.

Then Luis Suarez, to sow mischief, said he wished to leave with the hermit, and God said nope, and there was a huge argument, and everyone had a different opinion about some language in Luis Suarez’s contract, and God sat there listening to them all and wondering why he let himself get mixed up in these sorts of messes, it all seemed so pointless, they were all so intense and for what, really? God thought that maybe he didn’t want to hang out with mortals anymore. Finally God cut through the noise and said, “Hello? God here. He’s staying.”

And the reporters shook their heads, and Luis Suarez thought that God was being kind of a douche. But there wasn’t really a lot he could do about it.

It came to pass in latter days that two angels were given the task of hovering above the North Pole with trumpets, and their names were Cassiel and Gary. And this was their speech as they hovered:

“What I don’t get,” said Cassiel, “is why we even care so much whether athletes are ‘good.’ Why is that such a big thing for sports fans?”

“It’s always been that way,” said Gary. “People have always looked to athletes to exemplify the approved virtues of their time and place.”

“Hmm,” said Gary, “I guess because athletes already represent a physical ideal for many people, and there’s a natural tendency to want to find correlations between inner and outer qualities. In the same way that, like, if you’re talking to a very good-looking person, unless they’re really dumb you’ll take their ideas more seriously than you would an ugly person’s.”

“I know,” said Gary with a shrug. “But it’s human nature. Plus the way most sports are organized, athletes explicitly represent a community, so the ‘better‘ they are, the easier it is to see them uncomplicatedly as avatars, the better you feel about the community. It’s a convenience, more or less.”

“But it’s so bizarre that we want to see them as avatars in the first place,” said Cassiel.

“Is it?” said Gary. “I mean, think about it. On some level, doesn’t the whole appeal of spectator sports basically depend on imagining yourself as the athlete? You see a body do something amazing, your own body can sort of half-feel what it would be like to do that. Isn’t that a big part of the thrill? We’re projecting ourselves into their bodies; it’s no wonder that it would be upsetting to some people to learn that they have an alien or deformed inner life.”

“I mean, maybe it’s not even that complicated,” said Gary. “Don’t you just generally want good people to succeed and bad people to fail?”

“But that’s the thing,” said Cassiel. “Identifying ‘bad’ people in sports is such a cop-out so much of the time. We have no idea what’s going on in athletes’ heads or what their experience is like, and instead of seeing them in their full complicated humanness, we just decide they symbolize a value we don’t like and then spend all our time getting revenge on them for something that may not be real.”

“And it’s so inconsistent,” said Cassiel. “If you make a list of the different types of cultural celebrities, the standard of conduct we expect each of them to live up to is totally different from all the others. Rock stars are celebrated for taking drugs and sleeping around, but when athletes are caught doing it, they’re reviled. Movie stars can’t get away with as much as rock stars or rappers, but they get away with way more than athletes. It’s bogus.”

“Politicians get away with much less than athletes,” said Gary, “because we think that their jobs are primarily ethical. What musicians do is just aesthetic, so it’s safe for their lives to exist outside of, and even act as a kind of comment on, everyday virtues. Fair or not, we see athletes as hybrids of the aesthetic and the ethical, so we’re uncomfortable when they rebel.”

“But what sense does it make?” said Cassiel. “I can look at a painting by a murderer, or read a poem by someone who was cruel to his children, and all I think is what a profound and beautiful thing this hurtful person created. Why can’t I watch an amazing goal and feel the same thing just because the guy who scored it cheats on his taxes?”

“But say the same competitive drive that makes top-level athletes successful is also what makes so many of them flawed,” Cassiel said. “Isn’t that also human nature?”

“Probably,” said Gary. “Probably you’ve got these two big, incompatible aspects of human nature just sort of hopelessly crashing into each other, with no way to resolve them. It probably doesn’t make sense. It’s just … it’s in the Book.”

“You know, the Book. The Manual. The Book that explains how things are going to be done. Didn’t you read it when you started this job?”

Cassiel shook his head. Gary reached down behind the globe and took out a large, ancient tome. “Here,” he said, “we keep it down … what the hell?”

One of the bottom corners of the book was missing. In its place was a rounded set of teeth marks.

“Someone took a bite out of your Book,” said Cassiel.

And then, very slowly, Luis Suarez’s head emerged from behind the moon. He wore a sheepish expression.

And lo, Luis Suarez ducked down behind the moon, leaving Gary to leaf through a book with several important bits missing. And yea, Gary muttered many imprecations against Luis Suarez, while Cassiel looked on. And Cassiel for his own sake was silent, for he swore to himself that in the instant before the wrongdoer’s head disappeared behind the celestial orb, he had seen Luis Suarez look at them and wink.