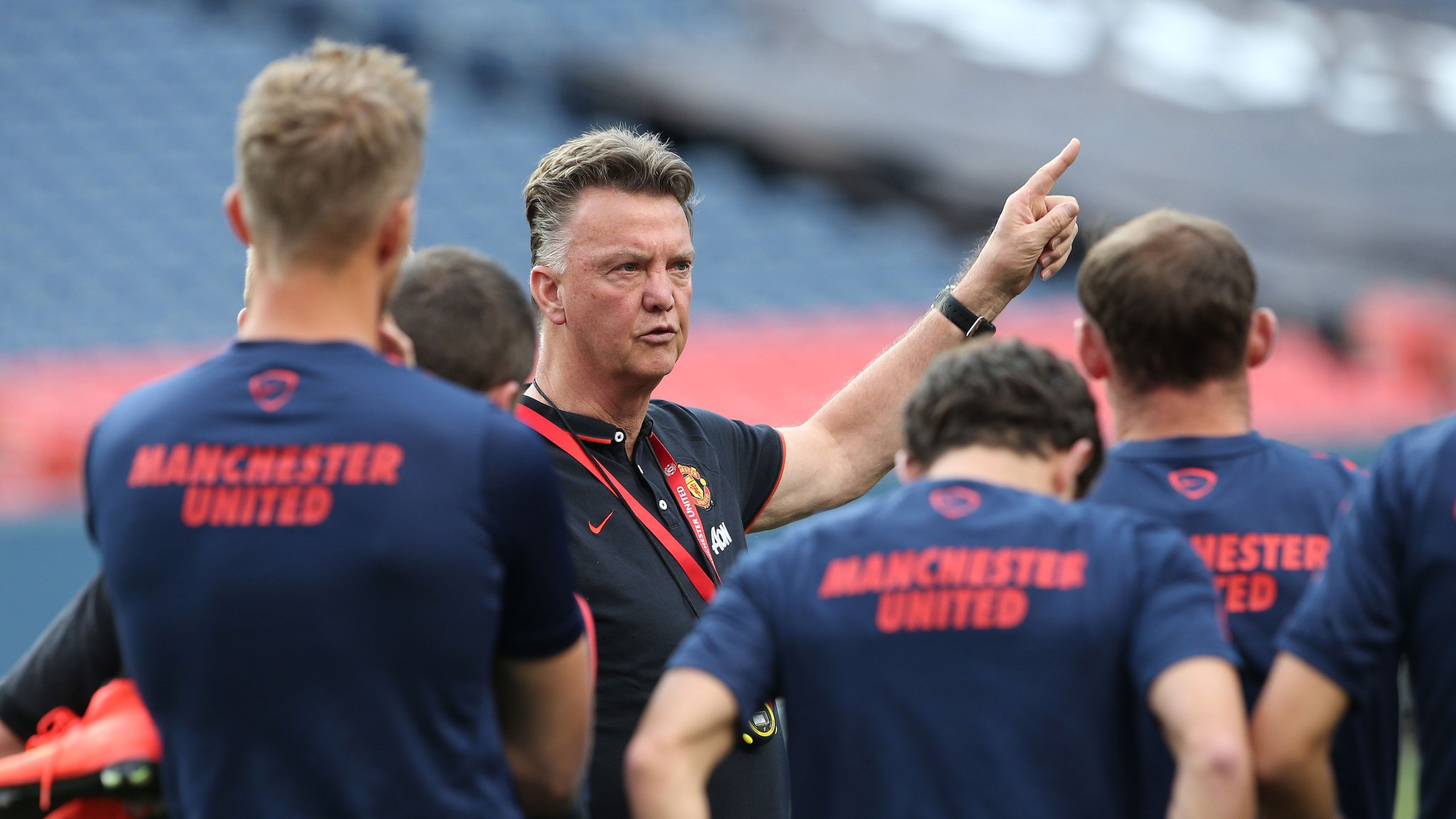 So when you’re describing van Gaal’s behavior, it’s important to be cautious. You can’t simply say “until 2009, he had definitely never displayed his testicles to his players by way of making a point that none of them understood.” He’s Louis van Gaal. He easily could have. As we prepare for the second phase of what feels like the van Gaal apotheosis — he’s about to start his first season in charge of Manchester United, after leading the Netherlands to a third-place finish at this summer’s World Cup — it’s helpful to keep repeating this. It’s the core tenet of the study of van Gaal — of van Gaalogy, if you will. You can never rule anything out.

In 2009, Luca Toni was one of the leading strikers in Germany and an integral part of the Bayern Munich squad that had won the Bundesliga two seasons before. Van Gaal, who had been the head coach at Bayern for only a few weeks, benched him. Tensions built. One day, van Gaal gathered his players around him in the locker room. He explained that he wasn’t afraid to drop any player from the team, superstar or not. No one was safe. Then, to underscore the point, he dropped his shorts. Exactly why he did this remains something of a mystery. Toni says it was to show that “he had the balls.” Van Gaal himself says it was to show that he uses everything for the team, “my voice, my mind, and everything else I’ve got.” Mark van Bommel says the players burst out laughing and that “it certainly didn’t have the effect van Gaal intended.” No one knew what he was doing. Bayern won the league-cup double that year.

You can never rule anything out. You can never rule out, for instance, that van Gaal will decide to substitute his goalkeeper immediately before a penalty shootout, as he did at the World Cup this year, sending on Tim Krul for Jasper Cillessen in the quarterfinal against Costa Rica, 44 seconds before the final whistle. It was a baffling decision, one that no manager had made in any previous World Cup. Probably no manager had even thought about it. I mean, why would you? Krul stopped two penalties and the Netherlands went on to the semifinal.2

If José Mourinho3 is the Lord Byron of European soccer — ironical, suavely abrasive, ultimately better able to sleep at night than he wants you to suspect — then van Gaal is something like its Kanye West. He’s a self-appointed genius who turned out to be an actual genius, a fragile megalomaniac, an emotional extremist tormented by the world’s failure to act as a projection of himself. He’s a shrewd analyst whose brain runs on pure id, which makes him both a comical figure and a faintly moving one.4 “I cry almost every day,” he has said. “There’s always something that touches me.” He’s almost certainly underrated both as a tactical innovator and as a nurturer of talent. This is hard to believe only because he so consistently overrates himself.

And forget about that third-place finish at the World Cup with a supposedly aging and inferior Dutch squad. Remember the German team that won the tournament? It was van Gaal who made Thomas Müller a regular starter for Bayern. It was van Gaal who turned Bastian Schweinsteiger into a defensive midfielder, the position from which he dominated the final against Argentina. World soccer is saturated with his influence; the only reason to deny this is that it’s also saturated with his personality. He’s like a glacier that won’t stop yelling at tourists: “I carved that mountain range!” 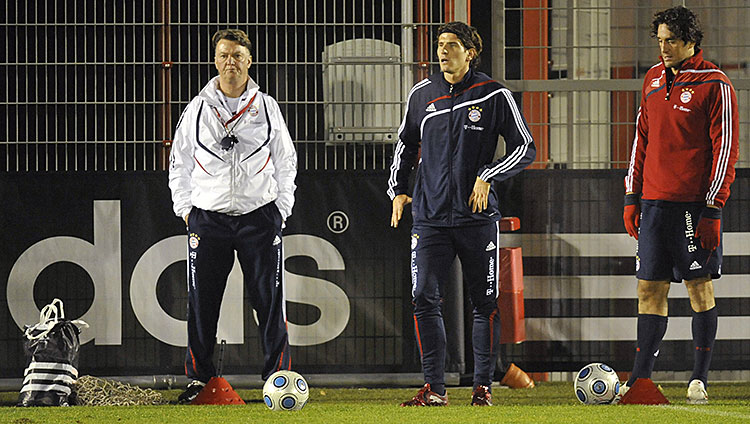 A few other van Gaal anecdotes, just for laughs. Some of these are more verifiable than others; they are all, however, among the core texts of van Gaalogy. When you study Louis van Gaal, you also study the apocrypha. You can never rule anything out.

It’s the early 2000s. Gerard Piqué is a teenage defender for Barcelona’s youth team. One day, Piqué’s grandfather, who’s a club director, takes the boy to meet van Gaal. Feeds the coach some kindly old-man stuff — you know, this is my grandson, really admires you, someday he’ll be a Barcelona defender. Van Gaal looks Piqué up and down and then, without warning, shoves him to the ground. “You’re too weak to be a Barcelona defender!” he shouts.

It’s 2000. Van Gaal has just signed a contract with the Dutch national team. He earnestly explains to the press that the contract runs through 2006, “so I can win the World Cup not once but twice.” Because even van Gaal’s failures are spectacular, the Netherlands fails to qualify for the 2002 World Cup. He resigns in 2001.

It’s 2010. Van Gaal’s Bayern team has just won the Bundesliga; Munich is hosting a victory celebration. Standing on an ornate balcony with the team behind him and a huge crowd below, van Gaal shrieks out a victory speech that … well, look, “like the Adult Swim version of Hitler at Nuremberg” isn’t a phrase I’m going to throw around casually. Just watch it for yourself.

Now for the big question: Can van Gaal save Manchester United? His past history suggests a pretty straightforward timeline, one in which he achieves virtually instant success and sustains it for one or two seasons before the savage public feuds he has engendered — with the media, with the club board, with his own best players — send little cracks crazing through the edifice. I mean, if van Gaal were actually God and not God only in his diary, the history of creation would be all like:

DAY 1: Let there be light, God said, and there was light.

DAY 2: Let there be morons, God said, and there were morons.

DAY 4: I mean, I’m just saying, God said. None of you guys could have created light. You’re too stupid! Hey, you want me to part the earth from the waters? OH WHOOPS BECAUSE SOMEBODY JUST DID HEY WAIT THAT WAS ME.

DAY 6: What, God said, you don’t like the way I’m doing things? Oh, right, like you morons could RULE THE FRICKING UNIVERSE.

DAY 7: You … you what? God said. You want me out? You know what, FINE. I would rather rest anyway. Enjoy creation, suckers.

If the pattern holds, van Gaal will win the Premier League in his first or second year, call Wayne Rooney “a namby-pamby hog-boy” in repeated press conferences, develop between four and six future international stars on the United youth team, declare that he deserves a Nobel Prize, openly mock the Glazer family on television, reach at least one Champions League final, and leave the club in a storm of mutual hatred after five seasons during which he wins two major and four minor trophies. The Alex Ferguson reaction shots alone will justify the experiment. It will be so much fun.

Will the pattern hold, though? The move to Manchester represents easily the biggest cultural dimension shift of van Gaal’s career, the first time he’s been at a club that wasn’t either Dutch, accustomed to near-continual managerial turnover, or both. Apart from a tendency to turn purple and bellow at 22-year-olds, there’s just nothing in his background that fits with the Alex Ferguson model of long-term dictatorial stability. Ferguson was a company man with a temper; van Gaal has a temper that lays waste to companies. Ferguson cared only about winning and knew how to subordinate all his rougher impulses to that priority. Van Gaal wants to win, but he also needs the credit. He’s being welcomed by United fans as a savior figure, which makes sense in the postapocalyptic crater left behind by David Moyes. But if things go wrong — well, there’s simply no precedent at Manchester United for the Louis van Gaal brand of wrongness. It’s so much wronger than what anyone knows to expect.

And he’s said it himself — the squad he has inherited is broken. United is rich (that’s redundant) and not totally lacking in good players (Robin van Persie, Juan Mata, Rooney) and promising players (Ander Herrera, Luke Shaw). But the center of the defense is nonexistent.5 The only left back is a 19-year-old who’s currently being forced to train alone because van Gaal says he’s out of shape. And then there’s this: The Moyes disaster was a slowly receding wave that replaced the team’s morale with a beach full of driftwood. How van Gaal — not the most affirming presence, to put it gently — brings this drowned, shattered megaclub back to life is anyone’s guess.

On the other hand, no one thinks Louis van Gaal is up for a tough challenge more than Louis van Gaal does. “I am who I am,” he said at his first press conference in Munich. “Confident, arrogant, dominant, honest, hardworking, and innovative.” He is all of those things. He will need to be.