Who Won the Month? 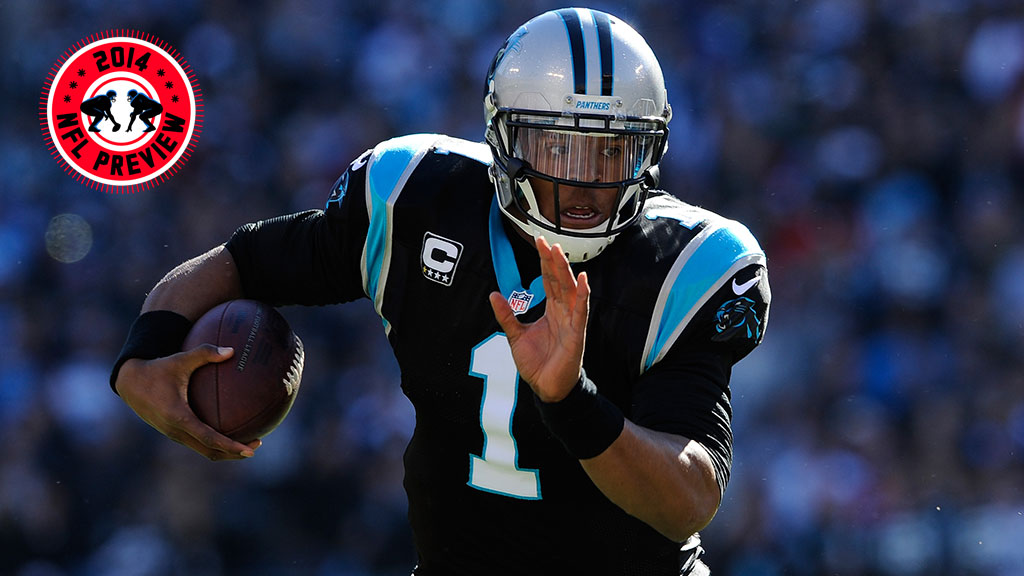 The Carolina Panthers were the feel-good story of the 2013 NFL season. After years of rebuilding and losing agonizingly close games, everything suddenly clicked into place during an eight-game midseason winning streak, one that saw them beat the 49ers and Patriots in consecutive games. They stumbled onto a formula that worked: An aggressive, physically imposing defense created takeaways, a dominant rushing offense held on to leads, and for an added pinch of spice, previously conservative head coach Ron Rivera turned into the gambling man Riverboat Ron — one of the league’s most aggressive fourth-down decision-makers overnight. While their season ended with a disappointing loss at home to the 49ers, Carolina fans were rightly proud to have finished 2013 with 12 wins and the NFC South title.

Welcome to 2014, when just about everything that could have gone wrong for the Panthers this offseason managed to do so. And even before that, truthfully, there were plenty of signs the Panthers were going to struggle to repeat their feats from 2013 in the year to come. Much will have to go right for Carolina, football’s arguably thinnest team in one of the league’s toughest divisions, to remain atop the NFC South in 2014.

Before the League Year

A lot of teams pledge to play the same way that last year’s Panthers played — it’s basically Ken Whisenhunt’s mission statement with the Titans — but very, very few manage to pull off that style of play year after year. While the Panthers will return many of their stars from last year’s team, they may struggle to get the same results out of those players.

Start with Carolina’s success in close games, which was the single most shocking turnaround in football. During Rivera’s first two years as head coach, the Panthers had gone just 2-12 in games decided by a touchdown or less. They promptly lost their first two games of 2013 by a combined six points, including a brutal loss to the Bills that saw Rivera again act too conservative at the end of a narrow contest. After going 2-14 in one-score games, Rivera finally snapped. He started to go for it far more frequently on fourth downs, and while his decisions didn’t directly influence close games, the Panthers started winning them. The Panthers played five one-touchdown games the rest of the way and won them all.1 They suddenly learned how to win close games.

More likely, of course, is that we saw the Panthers playing at two extremes. They deserved to win a few more of those close games when they were 2-14; the Panthers-Falcons game in which Cam Newton somehow fumbled the ball backward on what would have been a game-sealing third-down conversion followed by Rivera’s decision to punt comes to mind as an obvious example. And they were probably a little lucky to win their final five one-touchdown games in 2013, as Patriots fans would likely be happy to tell you. Pretend for a moment that the Panthers won exactly half of their one-score games in the past three seasons and you see a much more consistent team:

The plexiglass principle also signifies an obvious claim against Carolina’s future. Teams that improve as rapidly as Carolina did last year often struggle to hold on to their gains and have a consolidation season the following campaign. From 1989 to 2012, 35 teams improved by exactly five wins in a given season, as Carolina did from 2012 (7-9) to last season (12-4). The following year, those 35 teams gave nearly half of their wins back, losing an average of 2.4 wins off their previous record.

We also knew what Carolina’s 2014 schedule would look like before the 2013 season ended. Even then, it didn’t look like it was going to be very pretty, and the aggressive offseasons of the teams around them in the NFC South have only made things worse. In addition to facing each other a total of six times, the organizations in the South have to play against the AFC North and NFC North this upcoming campaign. Even worse, by virtue of their first-place finish a year ago, the Panthers’ two team-specific contests come against the Eagles and Seahawks. Last year, the Panthers faced the league’s ninth-toughest schedule. This season, Vegas estimates that Carolina has the NFL’s third-toughest opposing slate, behind just Arizona and Seattle.

The Worst Offseason in Football

Sadly, the Panthers certainly had among the most frustrating offseasons of anybody in the league, and it had very little to do with the work of Rivera and general manager David Gettleman. While Gettleman did make the very curious choice of giving a long-term deal to eminently replaceable kicker Graham Gano after a career year, he was forced to sit on his hands as a number of key Panthers made their way out of town, with little ability to replace them. The Panthers are still cap strapped from the decisions made by former general manager Marty Hurney. While Gettleman restructured the deals of players like DeAngelo Williams and Thomas Davis to create more cap room, there’s only so much he can do without hamstringing Carolina’s cap for years to come. The Panthers still carry nearly $19 million in dead money on their cap this season, including $8 million for Jon Beason. Only the Cowboys and Bills will carry more dead money on their ledger for 2014-15.2

Carolina’s first and most important task this offseason was to retain defensive end Greg Hardy, who was due a mammoth raise after finishing his four-year, $2.8 million rookie deal with a 15-sack campaign in 2013. They were able to keep Hardy around, but after failing to come to terms on a long-term deal, the Panthers had to franchise Hardy and give him a one-year contract for $13.1 million. It’s bad for both sides. Hardy surely wants the security that would come with a long-term deal, one that would guarantee him something like $30 million. And Carolina would have loved to construct a contract that saved them money up front in their current time of need. A one-year deal just pushes these problems to next season, when franchise-tagging Hardy would cost Carolina $15.7 million during a year when the team will likely be looking to extend Newton’s contract3 as well. Even worse, Hardy was convicted on domestic assault charges during the offseason and instructed by a court to attend Alcoholics Anonymous meetings. Carolina spent a second-round pick this year on Missouri end Kony Ealy, a move that suggests Hardy’s time in Carolina could be coming to an end.

With his new one-year deal, Hardy’s cap hit increased by nearly $11.8 million, which ate up almost all the $12.4 million increase in the league’s cap limit from 2012 to 2013. Not great. Carolina had to restructure several contracts just to get under the cap, and then had to watch as several contributors to last season’s team left in free agency. That mainly came about in the secondary, where Carolina had managed to piece together a useful unit from journeymen and unknowns. Safety Mike Mitchell, the team’s enforcer, left for Pittsburgh on a five-year, $25 million deal. Quintin Mikell wasn’t retained, while cornerback Captain Munnerlyn signed with Minnesota and Drayton Florence remains unsigned. The only starter left is undrafted rookie Melvin White, and Carolina’s been forced to go to the wishing well for another set of castoffs: The likes of Antoine Cason, Roman Harper, and Thomas DeCoud will be expected to contribute in key roles for Carolina this season. Now, I write a lot about how teams that find cheap talent at the bottom of the free-agent market shouldn’t be afraid to go back into the market and acquire another cheap player, and Carolina’s sorta doing that here in the hopes of fielding another low-cost secondary behind an excellent front seven. Doing that with one or two spots on your roster every year is fine. Building an entire unit out of spare parts is another story, but Carolina doesn’t have a choice.

If the offseason ended there, that would have been a frustrating enough spring for the Panthers to deal with. What made it worse, though, is that Carolina’s two longest-tenured players left town without replacements. First, after years of rumors, Pro Bowl left tackle Jordan Gross finally decided to retire, costing Carolina arguably its best offensive player at any position. The team wasn’t able to afford a viable replacement for Gross and failed to draft a tackle in April, leaving it with mere prayers on Newton’s blind side. Nate Chandler and Byron Bell, neither of whom have any experience on the left side, will compete for the job in camp. The loser will fall back to right tackle.

Carolina probably couldn’t have done anything about retaining Gross. It might have been able to do a better job of keeping wideout Steve Smith happy. For reasons still unknown, Smith’s relationship with the team deteriorated this offseason, leading to his release in March. Smith had undoubtedly lost a step at 34, but, scarily, he was also Carolina’s best wide receiver by a comfortable margin last season. With pass-catchers Brandon LaFell and Ted Ginn also free agents, Carolina had to radically overhaul its wideout crop without spending much money in the process. The Panthers … built one of the more depressing groups you can imagine. They signed aging third wideouts Jerricho Cotchery and Jason Avant before drafting 6-foot-5 Florida State project Kelvin Benjamin with their first-round pick. Even given the presence of Greg Olsen at tight end, this is a sad group of receivers for Newton to work with. And there’s really just not much Gettleman can do about it.

So, how can the Panthers make it back to double-digit wins and meaningful football in late January? It’ll take downright heroic efforts from their group of young superstars. Luke Kuechly, last year’s Defensive Player of the Year, can’t see his performance slip. Hardy and Charles Johnson, the team’s pair of dominant defensive ends, combined for 26 sacks last season; they’ll need every one of those again. Center Ryan Kalil will need to shepherd a young, inexperienced line to competence. And, more than anything, Carolina needs greatness out of its quarterback and its coach. I wrote about Newton’s stagnation in the Trade Value Column, and while he was very underrated before Carolina’s big year last season, Newton has little talent and continuity around him this season.

Rivera, meanwhile, has to build upon his reputation and continue to push the envelope where his team has advantages. It was disappointing to see him kick a short field goal after earlier failing on a fourth-down conversion in the playoffs against San Francisco, and it remains to be seen whether he’ll stick with the strategy if his team struggles at the beginning of 2015. Rivera has done an excellent job of getting the most out of a young, talented defense, and he should be applauded for being open-minded enough to go hyperaggressive on fourth downs last season. However, given the problems circling this team and the struggles they’re likely to face in 2014, it might be time to jump off the riverboat.