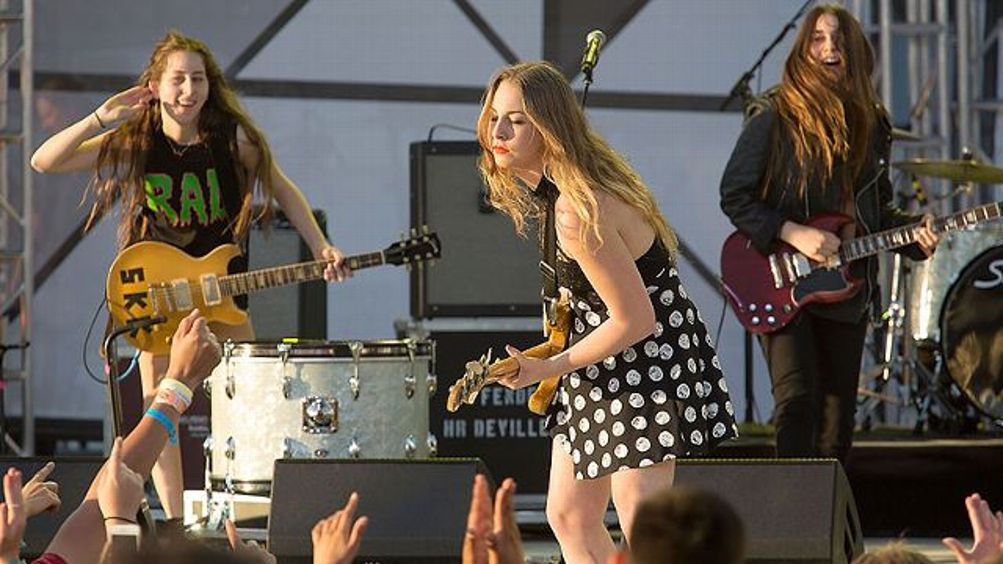 If you were to rank the most momentous eras in pop music history, the summer of 1997 probably wouldn’t make your top 50. It’s not exactly remembered as a golden age, and with good reason: The no. 1 song from mid-June to late August was Puff Daddy’s “I’ll Be Missing You”; the top albums included the Spice Girls’ Spice, Bob Carlisle’s Butterfly Kisses (Shades of Grace),1 and the Men in Black soundtrack. And yet an important historical development did occur during this time, and it involved the unofficial death of the genre once called “alternative.”

Alternative is still used today to describe what’s also known as the “modern rock” radio format — the epitome of the middle of the road, in other words. But in the ’90s, alternative had a different meaning; it was used to denote rock artists who were perceived to be, at least in spirit, non-mainstream. From the beginning, the term was problematic. Pearl Jam and Metallica were two of the most popular rock bands of the early ’90s, and yet one was considered alternative and the other was not. It was a classification based more on aesthetics and posturing than music — Pearl Jam pledged allegiance to artists, like Ian MacKaye and Mike Watt, who were associated with the underground, while Metallica locked arms with Guns N’ Roses and unabashedly pursued stadium-size stardom. Even if the records didn’t sound all that different, listeners sensed that the bands’ attitudes were rooted in divergent camps, which was enough to make “alternative” a moderately helpful descriptor.

That is, until the summer of ’97, when alternative was finally rendered meaningless. In June, a middling nu-metal outfit named Sugar Ray released its second record, Floored, which quickly spawned an uncharacteristically poppy single called “Fly” that eventually topped Billboard‘s alternative chart for eight weeks. Two weeks after Floored, Smash Mouth released its debut, Fush Yu Mang, which spawned a beach-friendly single, “Walkin’ on the Sun,” that scaled the alternative chart for five weeks. Consider that Third Eye Blind, Matchbox Twenty, and Marcy Playground also put out records around this time that would come to dominate alt-radio,2 and it’s not hard to spot a pattern — this was a generation of bands whose aggressive pursuit of the pop charts made it indistinguishable from whatever “alternative” was supposed to be an alternative to.

I bring this up only because I believe we’re in the midst of a similarly significant phase in the fall of 2013 — only now we’re witnessing the death rattle of the current version of alternative, “indie.”3 In the past month, there’s been a series of releases — including Haim’s Days Are Gone, Chvrches’ The Bones of What You Believe, Lorde’s Pure Heroine, Icona Pop’s This Is … Icona Pop, and the 1975’s self-titled debut — that have been slotted as “indie pop,” ostensibly because they’re positioned outside “regular” pop just as Pearl Jam once was placed outside regular rock music. But the “indie” modifier is instantly extraneous once you’ve actually heard these records — in sound and form, there’s nothing that’s weird, experimental, or potentially off-putting about them. (The same can be said of indie-favored pop records released earlier in the year, including Charli XCX’s True Romance, AlunaGeorge’s Body Music, and Ariana Grande’s Yours Truly.) They’re well produced, catchy, immediately likable, and fashioned in the mold of successful trends.4 They are simply pop pop records.

Setting aside personal preferences (or judgments about the quality of execution), there is little that separates these artists musically from a more overt commercial striver like Imagine Dragons — a “rock” band whose relationship with actual rock music is tenuous at best — and it seems as though this was intentional. After all, Imagine Dragons is huge. And who doesn’t want to be huge these days?

If I were a betting man, I’d put my money on Haim (pronounced like “rhyme”) to make the biggest impact from this year’s class of dubiously indie indie-pop groups. Days Are Gone isn’t only the best LP of the bunch, it’s one of the very best records of the year — a near-perfect fusion of classic songwriting chops and canny production techniques, drawing widely from seemingly incongruous influences with a disarming ease. For instance, recent single “The Wire” is like a generational Rorschach test: Depending on the vantage point, the sultry harmonies, insistent guitar riff, and hand clap–inspired beat will be reminiscent of Survivor-era Destiny’s Child, late-’90s Shania Twain, or the Eagles’ “Heartache Tonight.” Days Are Gone is littered with comparably convoluted cross-pollinations — “Forever” sounds like the Pretenders as produced by Jimmy Jam and Terry Lewis; “Go Slow” is like the child of Tuesday Night Music Club and CrazySexyCool; and the incredible “Honey & I” resembles a vintage Tom Petty track covered extemporaneously by Beyoncé for the most star-studded Daytrotter session ever. Ultimately, though, it fits into a musical framework constructed by a singular trio of sisters from Southern California who got their start playing covers in a family band headed by their parents. (The band was called, quite awesomely, Rockinhaim. Like Days Are Gone, Haim sometimes seems too precious to be true.) There was also the Richard Marx–shepherded tween-pop act the Valli Girls that two of the sisters formed in the mid-’00s — you might’ve heard them on the Sisterhood of the Traveling Pants soundtrack. 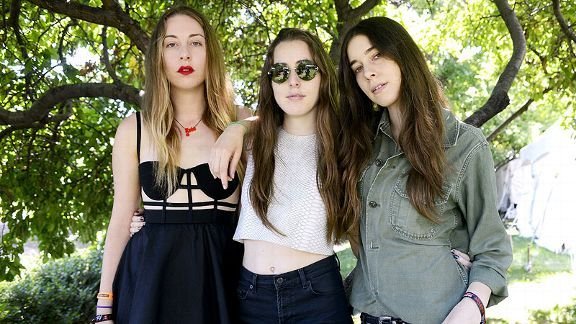 As promising and subtly ambitious as the group seems, Haim is also a powerful idea, particularly for the music press. It’s possible that if Este, Danielle, and Alana Haim hadn’t come along, critics would have had to invent them. They were lavished with praise almost immediately after posting a free EP on their website in early 2012. Since then, Haim has been the toast of the notoriously hype-happy British music press, which led to some important early adopters in the States, including Spin (which focused on the group during this summer’s Lollapalooza coverage and ran a profile coinciding with the Days release) and The New Yorker‘s Sasha Frere-Jones, who declared earlier this month that Haim became “everyone’s favorite band in America within roughly two weeks.”5

Haim represents something of a platonic ideal for critics who have spent the past decade systematically deconstructing the pop canon and stripping away the remnants of “rockism” — the dirtiest of curse words in critical circles reserved for partisans of the whitest, manliest, guitar-slingiest, and generally most revered figures of ’60s and ’70s rock. In the process, any suggestion that musicians committed to the standard guitar-bass-drums configuration could represent “the future” has come to be seen as old-fashioned, if not ignorant of the cultural and technological vanguard. Haim might resemble a traditional band, but they don’t always sound (or act) like one.6 And while classic rock forms the crux of its sound, Days Are Gone is a record that could exist only right now.

Haim’s purview is so open and generous that it will coax even those poor cast-out rockists into the fold. At heart, the Haim sisters are a folk-rock outfit in the mold of Fleetwood Mac (or, for the stubbornly indie-minded, Jenny Lewis’s sadly defunct band, Rilo Kiley). But philosophically, Haim approaches the idea of being a rock group in the early 21st century with a more modern, musically polymorphous sensibility. Rock is only one of the options on the menu. In this way, Days Are Gone is comparable to the most adored indie pop record of 2013, Vampire Weekend’s Modern Vampires of the City, which also pulls from everywhere and resists easy categorization. (City coproducer Ariel Rechtshaid also contributed to Days Are Gone.) In the realm of indie, Days Are Gone represents a new boldness, embracing full-bodied and accessible record-making that’s intended to be appreciated by “everybody” rather than a select group of somebodies. In retrospect, the bastardized quasi-genre known as “chillwave” seems like an important (if underappreciated) transition to this moment — it placed ironic quote marks around the gooey sumptuousness that is now reproduced faithfully on the hippest indie records. It’s also worth considering the influence of Canadian provocateur Grimes, whose publicly professed love of (and musical affinity with) Mariah Carey on 2012’s Visions seemed at least partially motivated by a desire to tweak dweebish indie purists.7 Days Are Gone is thankfully free of such baggage — all chin-stroking aside, it’s ultimately just a light, effervescent record loaded with great songs that are exceedingly easy on the ears. Like the greatest pop music, it captures a moment in time while also aspiring to transcend it, all without breaking a sweat.

If this truly is the end of “indie,” I’m fine with it. I have no attachment to indie as a sacred emblem, and welcome the push toward pop as a natural progression, especially when it results in records as enjoyable as Days Are Gone. Still, I do have one nagging concern: Where’s the anger? You remember anger, don’t you? It’s this emotion that humans feel on occasion — it’s often accompanied by spite, exasperation, and catharsis. John Lydon once described it as “an energy” in a Public Image Ltd song. Anger has traditionally been used as fuel for independent-minded artists using music to critique the excesses of popular culture (rather than as a means of joining the party). Now, everything just seems so … pleasant. If so-called indie music now amounts to an ice cream buffet with a side of cotton candy, where does that leave those of us seeking a more balanced diet? Sometimes you need a shot of vinegar to clear the palate.

In the past few weeks, my shot of vinegar has been Is Survived By, the latest record by SoCal post-hardcore band Touché Amoré. Punk (along with metal) has long been a reliable source of musical indignation. While media interest in these genres is scattershot at best, they represent the only true “indie” rock left. Some artists, thankfully, will always be unable or unwilling to tamp down their agitation for mass consumption.

By Touché Amoré standards, Is Survived By is actually pretty soft — the guitar lines provided by Clayton Stevens and Nick Steinhardt are clean, shiny, and consistently melodic, ringing with the clarity of R.E.M. on occasion. In a thicker-skinned universe, Is Survived By would be an arena-rock record. But the music is just a backdrop for the stream-of-consciousness shouting of lead singer Jeremy Bolm, who expresses his every neurosis like Morrissey communicating his best lines via Sam Kinison. Bolm’s primary fear on Is Survived By is (appropriately enough) marginalization: “I don’t know what my legacy will be,” he hollers on the album’s first track, “Just Exist,” setting the tone for a record that plays like a meta-examination of how the best and worst thing that can happen to a band is being appreciated. Later, on Survived‘s most luminous song, “Praise/Love,” he sums up the potential pitfalls that await after the “happily ever after” of popular acceptance: “A glutton for praise / a glutton for love / abuse my name for all of the above,” he says, scorching his larynx on the tortured ambivalence.

Is Survived By once would’ve been representative of typical indie angst. It’s certainly the sort of record that would’ve spoken to me as a teenager when I first sought out music that resisted the radio, back when I wanted music that sounded as rejected and confused as I felt every waking moment. Now, Survived feels like an outlier. Assimilation, not alienation, is what drives indie now.