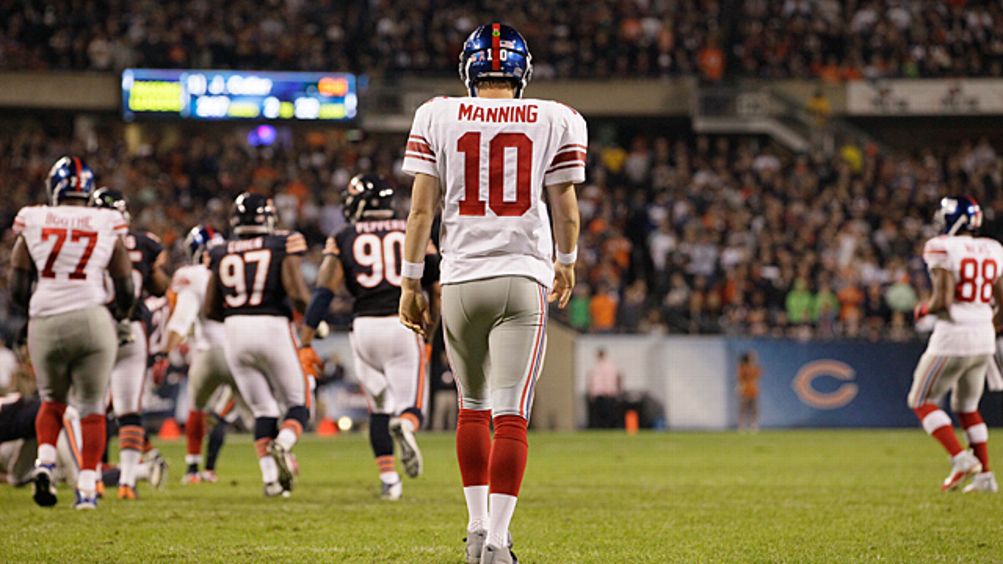 Remember that whole drama? April 24, 2004: San Diego makes Eli Manning the first pick in the NFL draft, only Eli, who’s coming off a Maxwell Award–winning senior season at Ole Miss during which he also finished third in the Heisman voting, has already announced he doesn’t want to play for the Chargers and won’t sign a contract if they take him. He’s been backed up in this by his father, ex–Pro Bowl quarterback Archie Manning, who’s also, of course, the dad of reigning NFL MVP Peyton Manning, leading to a lot of dark murmuring about how the “First Family of Football” — this is a phrase that’s constantly thrown around during draft week — is trying to cheat the system. The Mannings won’t share their reasons, but their reasons aren’t hard to guess. San Diego, fresh off a 4-12 season, has fielded sub-.500 teams every year since 1996, and there’s not a lot of optimism that the team’s 80-year-old owner, Alex Spanos, is serious about turning things around. The First Family wants its baby playing in Super Bowls. Arguing about whether this is classy or classless behavior keeps ESPN talking heads in throat lozenges all week.

A portrait of Peyton Manning at 37

“At this stage in his late career, really for the whole season-plus he’s been with Denver, Manning makes being a midlevel IT manager look like a form of ruthless conquest. It’s as if he wrote a script to install automatic PC updates, and somehow it made him the god-emperor of hell. This is how he plays football: He goes out every week with a graphing calculator and a stack of forms, and he just audits teams to death.”

It makes fascinating viewing, watching the draft-day pundits try to reconcile those two big concepts, the Mannings and something wrong; it’s like there’s no verb to connect the parts of that sentence. The crowd at Madison Square Garden boos every mention of Eli’s name, but you can’t really come out as anti-Manning if you’re one of the boys in big suits. It’s not the done thing. Chris Berman at one point, and this is by way of firing off a criticism, just starts listing different categories of respect: “The Manning family. The first family. I mean, respect of the game. Respect of the people. Absolutely.” But then he hits on the conceptual solution he’s been grasping for, one that lets him question the family’s actions while still praising its essential nature. If the Mannings are synonymous with respect and honor, as they must be, but their manipulation of the draft isn’t respectful or honorable, as it maybe hasn’t been, then look: They’ve merely behaved in a way that has caused them not to resemble themselves. They’re not bad people. They’re just, in the moment, un-Manning-like.

And I don’t know about you, but watching this old draft footage now, watching Eli sheepishly blink down at Suzy Kolber during about 150 pre- and post-selection interviews, what runs through my head is, Why didn’t Peyton have to go through this? If you’re Peyton, everything just falls into place: You work hard, you binge-watch game film, a well-run Colts team happens to land the first draft pick, click. It’s as if fate shares your focus. Eli is more Archie’s natural heir than Peyton will ever be — like Eli, his dad was a fun and scrambly quarterback, more a seat-of-the-pants adventurer than the lucid math-compulsive then playing in Indiana — but because Peyton came along first, the definition of Manningness has somehow shifted in a way that includes Eli out. “Being here with my family these past few days has been really great,” he tells Kolber afterward. But something has been settled over this draft week: Eli is the un-Manning. He is the Manning who makes mistakes,1 and thus, as a Manning, he is unlike himself.

But then, what is he like? There has always been, with Eli, something curiously vague, something that stops your impression of him from ever quite forming all the way. As well as you may know him — and any quarterback who’s won two Super Bowl MVPs is someone you can’t help but know well — you never get past that strange, encircling blank. There’s a moment in The Book of Manning, the recent ESPN Films documentary about the family, when the camera settles on an old photo of Eli in his high school jersey and you hear Archie saying, “None of us had a clue what Eli’s dreams were.” At another moment, there’s some home-movie footage of what looks like Eli’s eighth or ninth birthday party, and Cooper Manning, the oldest brother, is saying, “Eli … had a lot of friends. Everybody liked to be around Eli. But it was almost like — Eli didn’t even know their names.” And somewhere in there you catch a glimpse of him. He’s fun. He’s polite. He’s got an aw-heck good-ol’-boy affect. And maybe it’s that he’s a little daffy, or maybe he’s just abstract,2 but there’s a buffer around him that not much gets through.

The way I keep thinking about it is this: Eli is inaccessible in the same way that history is inaccessible. Think about, I don’t know, old Oscar races. You can still get mad that Pulp Fiction lost to Forrest Gump in 1995, because even though 1995 is almost 20 years ago now, it’s still right there. It’s legible. But think back to, say, 1945, when Billy Wilder’s great Double Indemnity lost to a cornball Bing Crosby musical called Going My Way. Even if you love Double Indemnity, it’s hard to feel the same kind of outrage, because 1945 isn’t immediate in the same way. You can know every historical fact about it, you can parse all its trends and motives, but its climate of feeling can only be entered with a supreme effort of imagination, and even then, you can never be sure you have it right. 1945 doesn’t know your name. It’s just … another place.

I know someone who knows someone who claims to know “the secret of Eli Manning.” The way he says it, you believe him. But when you ask him what it is, this guy clams up; he won’t say.

At the moment, Eli is in the middle of what’s pretty clearly the darkest stretch of his career.3 His team is 0-6, its worst start in 37 years. He’s thrown a league-worst 15 interceptions, matching his total from all of last season. He’s personally committed more turnovers than any other NFL team. His fourth-quarter pick against Dallas cost the Giants a comeback win in Week 1; the same thing happened against the Bears on Thursday night, when Eli skimmed a ball over tight end Brandon Myers and into the arms of Chicago’s Tim Jennings. He’s spawned a million mad-face GIFs. He’s been taunted in public by a mayoral candidate in the city of Hoboken.4 His Giants were blown out by Peyton’s Broncos, 41-23. Peyton is still undefeated for the season, Eli still winless — because of course Peyton would uncork some of the best football of his career at the precise moment Eli went into free fall. We could keep doing this.

What’s been amazing about watching him lose this season is that, for all that the Giants’ struggles aren’t solely or even mostly his fault,5 this year’s team seems no more or less a projection of his personality than last year’s team, or than the 2011 team that won the Super Bowl after a 9-7 regular season, or than any team he’s led, really. He has seemed frustrated, but he hasn’t seemed less himself, because how could he? Nothing is less Manning-like than playing quarterback poorly. But when you’re already on the margins of Manning-ness, everything becomes possible, even failure.

One useful role dynastic families often play is to clarify the values of their cultures. Picture the Kennedys — the first family of touch football — romping on the lawn at Hyannisport, the whole tangle of ’60s aspirations that neatly kaleidoscopes in that image. The Mannings fascinate us partly because they’re absurdly good at football but also partly because they say something about America and masculinity and fatherhood6 and the South, and about football as a repository of tradition, and I suppose that in a weird and probably fleeting way they make all those things seem less hopeless. So it’s interesting, in that light, that it’s actually easier to picture Archie and Peyton reacting to Eli’s struggles than to picture Eli himself. Archie with his thin not-gonna-cry face, hurrying to stand beside any Manning in need of comforting. Peyton with his thunderclap scowl, rushing home to practice dice-right audibles.

Where does Eli go? One of my favorite Manning-family anecdotes is that as a little kid, while Cooper and Peyton were off playing in sixth-grade basketball tournaments or whatever, Eli would skip sitting with his dad in the stands to go antique shopping with his mother, Olivia. “The first couple of times it wasn’t because I wanted to,” he told the New York Times a few years ago. “It was just because she wanted to go shopping and there was nobody to watch me, so I had to tag along. But after I went a couple of times, I started to enjoy it.” As a college kid, he decorated his apartment with antiques he’d found on Magazine Street in New Orleans. As an adult, he goes antiquing with his wife in his spare time.

The picture of Eli happily browsing George III chinoiserie tripod tables is so un-Manning-like that it actually manages to be a little startling. It just makes no sense within the Good Father/Good Son landscape where we almost always situate the family. More than that: It has nothing to do with football. It’s not #Sports and #America; it’s a person doing a weird thing he likes. And maybe that’s the only way to see Eli — as the irreconcilable human element in the Manning allegory, the flaw in the narrative that reminds you that the talking heads’ way of looking at the world doesn’t, and can’t, contain the whole story. He seems inscrutable to us not because of some vector in a sports-media trope but because he’s a person who seems inscrutable. He seems un-Manning-like because “Manning-like” is a thing we made up. Life isn’t a draft-day debate segment, even if it sometimes looks like one on TV.

And wait — there it is, I’ve got it. I know the secret of Eli Manning. It’s beautiful. Here, let me show you.