The Battle for Second Place 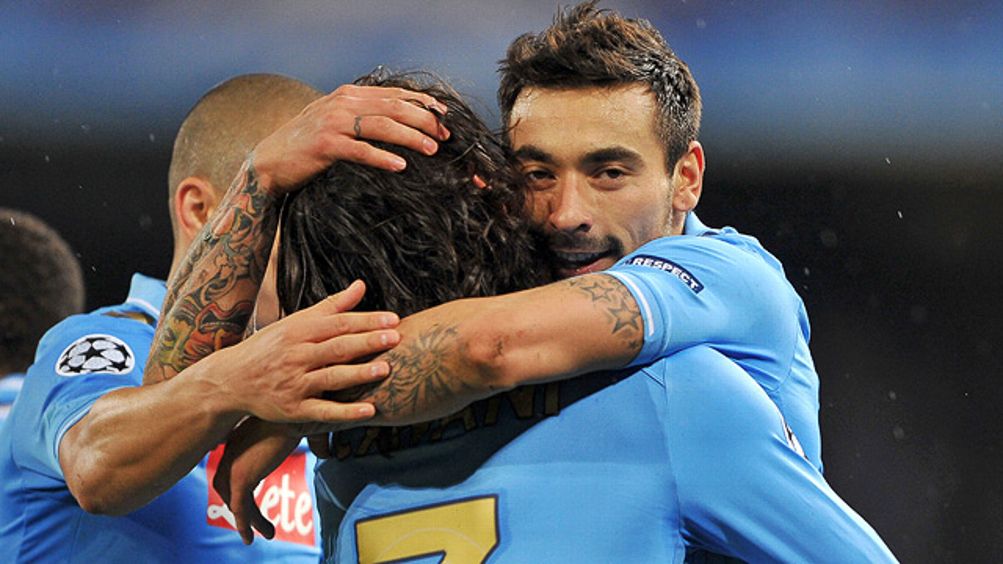 Napoli’s startling 3-1 upset of Chelsea in the Champions League last Tuesday accomplished three important things. It put a formal timestamp on the moment everyone realized that Serie A had caught up to the Premier League.1 It launched a thousand “Andre Villas-Boas DeathWatch” columns, to the point that hasandrevillasboasbeensackedyet.com became a vital resource for soccer journalists. And it cemented Napoli’s status as the coolest club in Europe and the default answer to the question, “If you’re an American looking to get into European soccer, which team should you support?”

Seriously, if you’re a fan in search of a club, how do you not consider Napoli at this point? Not only are the Azzurri not English — meaning you won’t be lumped in with the 40 trillion bros who picked a Premier League club because that’s what everyone else was doing — and not only are they a fun, overachieving young team, they’re also, and this is putting it mildly, a sky-wide constellation of the elements that make sports amazing. They’re perennial underdogs who come packaged with a glorious history. They’re the agony object of a furiously loyal and continually heartbroken fan base,2 but within living memory they’ve also been the trophy-winning home of the greatest soccer player in the world. They’re a team of crazy highs and pulverizing lows — basically the entire sports-fan experience in its most extreme and operatic form, all compressed into one club in a terrifying and fascinating city on a gulf at the foot of a volcano. Really, you’d rather root for Arsenal?

If you’re still not convinced, then it is for you, my reluctant friend, that I have compiled the following list of aspects of the awesomeness of Napoli.

Most of the economic and political power in Italy is concentrated in the north, around Milan and Turin. Naples is the de facto capital of the south. Everything you need to know about this arrangement for soccer purposes is contained in the sick old northern saying “Africa begins south of Rome,” i.e., the Neapolitans don’t really factor in when it comes to assessing whom you have to treat like white people. Soccer tends to flower in close proximity to money, meaning that cartographically the top Italian clubs — Milan, Inter, Juventus — look like they’re waiting for dark before slipping on a tuxedo and trying to sneak into Switzerland. Napoli is carrying the hopes of everybody on the wrong side of that geographic/cultural divide.3

And Naples itself is a totally broken, beautiful, lush, and dangerous city, run by the mob, with piles of burning trash in the streets (because the mob controls waste management), packs of wild dogs … and, incidentally, a lot of gorgeous architecture and an unbroken cultural tradition that predates the Roman Empire. Picture New Orleans, only with the Catholicism turned up to 14 and actual blood vendettas replacing voodoo bus tours.4 Also, there’s this huge, sunstruck bay, with Mount Vesuvius looming in the blue distance. Also, Kiton > Brioni. This is an appropriate venue for your fantasies of European soccer to inhabit.

Plus, if you visit for a game, you can go see the ruins of Pompeii, which now include most of the Chelsea defense.

It was at Napoli that Diego Maradona transformed himself from “talented but difficult Argentine player who can’t quite make it work in Europe” to “figure of quasi-religious significance the mere sight of whom makes sane people break down weeping.” Napoli bought him from Barcelona for a then-world-record (now-world-rounding-error) 12 million euros in 1984. He dragged Argentina to the World Cup title in 1986, carried Napoli to its first Serie A championship a year later, did it again in 1990, became an icon for anyone who’s ever been unfairly kicked around or felt hopeless or stood on the wrong side of a track, and launched the wobbly cocaine spaceship he’s been piloting, wine bottle in one hand, ever since.

Honestly, it’s almost impossible to put into context what Maradona meant to southern Italy between 1984 and 1991 — this scrappy, unpolished kid shocking the world on behalf of a region that had always been locked out of its soccer-mad country’s soccer hierarchy. What do you compare it to? If Michael Jordan had led the Cubs to the World Series in the middle of Beatlemania, it might have been close, although even that would have missed the weeping-statue-of-Virgin Mary religious overtones and the weird constant ground note of the Camorra.5 Maradona was hit with a 15-month ban for drug use in 1991 and left Napoli with his reputation in tatters.6 But this, more than any other club or city, was where Maradona happened. That’s the huge and unmanageable legacy the club has been coping with ever since.

Napoli went up in smoke in 2004, bankrupt and unable to field a team. (Be forewarned: This is the kind of thing that happens to Napoli.) The film producer Aurelio De Laurentiis7 reestablished the club the same year but wasn’t able to buy back its history (!) until 2006. Since then, they’ve been improvising on a low budget — never a wise strategy in soccer — but have nevertheless managed to climb from the third division back into Serie A, where they are currently sitting, pretty astonishingly, in sixth place. It’s both apt and very funny that the two English teams they’ve upset this year are Chelsea and Manchester City, clubs owned by a Russian plutocrat and an oil sheikh, respectively, and the world’s two leading representatives of the football-club-as-billionaire’s-plaything movement. Billionaires don’t go to Napoli unless it’s to get new suits.

The current team Napoli has assembled is a fast, fluid, counterattacking machine that scores goals for fun. (Only Milan has more in Serie A.) It’s built on something like the classic Billy Beane model — undervalued spare parts and young players Napoli develops in-house — but you get the impression that the front office is reading sonnets and talking to gypsies rather than consulting spreadsheets. In 2007, they signed Ezequiel Lavezzi for 6 million euros, roughly a tenth what Chelsea dropped on Fernando Torres, at a point when he was a not-terribly-successful striker in the Argentine Premiera Division with the nickname el Pocho.8 He flew into town and promptly scored Napoli’s first hat trick in 14 years. On Tuesday he scored a goal and repeatedly exploited Chelsea right back Branislav Ivanovic. Chubby nobodies with handgun tattoos blowing up on a big stage is what Napoli is all about.

(Also, Aurelio De Laurentiis? He’s a crusty, sunglasses-wearing tyrant who’s prone to fiery rants, once told his own manager “I won’t beat you up because you’re an old man,” called Lionel Messi a “cretin,” and threatened to chop Lavezzi’s agent’s balls off if Lavezzi thought about leaving the club. A couple of years ago, when several of Napoli’s players were being linked with moves to England, De Laurentiis’ tactic for convincing them to stay was to warn them that English women “do not wash their genitalia.” “To them,” he said, in a concerned, fatherly way, “a bidet is a mystery.” This is the kind of thing that happens at Napoli.)

It took me a while to appreciate Napoli’s best player. The first few times I saw him play, I thought he seemed a little overly languid or casual, and while there’s a great tradition in Serie A of Andrea Pirlo-style sleepy murderousness, it didn’t quite make sense to me in a big striker who looked like he should be powering over defenders. Then I watched his hat trick against Juventus last January. The last goal was a wicked low-altitude scorpion kick, the sort of move after which, once you’ve seen it, you can’t possibly doubt or even question the player who pulled it off:

Cavani is a sort of laboratory cross between Pippo Inzaghi and Zlatan Ibrahimovic, endowed with both that mysterious right-place-right-time instinct that some players have and also the ability to score from any angle with what feels like an exhaustive karate repertoire. That languor I thought I detected was really just a subtlety, a way of feeling out space and playing for the killer gap. It’s a joy to watch, and Cavani, who’s scored 41 goals in 57 league appearances for Napoli,9 is probably the most undercelebrated player in world soccer — something that will surely change if he decides to take his chances with foreign vaginas in the future. Follow him before the fear lifts!

You could pick an English team. There are lots of good ones. But you would miss Serie A’s compellingly hilarious peacock-vitelloni aesthetic of tough, competitive, and frequently violent men carefully tying back their lustrous ponytails before slipping into their hot-pink away gear to take the pitch, then celebrating big wins by crying and stripping down to their jockey shorts. For Americans used to laconic sports heroes in badly fitting suits, the sheer fabulousness of Serie A is either uncomfortably gay (if you are a bro who is bro’d out by that sort of thing) or an entertaining injection of pro-wrestling-style ego-theater into an otherwise serious sport. Either way, remember that Mario Balotelli, Manchester City’s mohawked and elaborately be-earringed fashion bomb of a striker, came to England from Inter and only makes sense in the context of Italian soccer.10 Rooting for Napoli means that instead of watching brave English midfielders scowl into the cold week in and week out, you will be watching highly talented, self-indulgent fashion plates act out a never-ending cologne ad. This is a win, believe me. Their girlfriends are hotter than yours, too.

For these and many other reasons, I nominate Napoli as your new European club. Quick, fall in love now before Chelsea buys the whole team and everything reverses again.