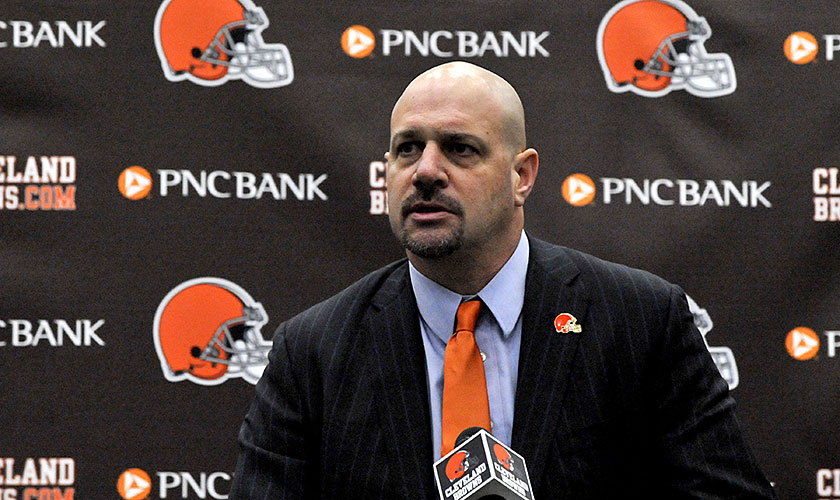 With all the Super Bowl craziness, we’re guessing there was some football news from the past couple weeks you might have missed. No worries. That’s why we’re here.

The latest round of fired head coaches has had no trouble finding work. Leslie Frazier (Bucs), Jim Schwartz (Bills), and Gary Kubiak (Ravens) all landed coordinator jobs in the past month, and both defensive coaches happen to be in great situations.

Buffalo’s defense finished fourth in DVOA last year and was good enough to get former coordinator Mike Pettine the head job in Cleveland, and the best part of the Bills’ defense happens to be a group Schwartz has always coached well. Buffalo finished third in adjusted sack rate and has as much talent up front as any team in football with Mario Williams, Kyle Williams, Marcell Dareus, and an improbably resurgent Jerry Hughes. Schematically, the move from Pettine to Schwartz is worth watching. Schwartz has historically been a 4-3 coach averse to blitzing. That’s a significant departure from Pettine’s varied fronts and aggressive approach, but the Bills have the personnel up front to go either way. Schwartz hasn’t tipped his hand either way, saying the Bills’ defense will be matchup-specific, whatever that means.

There’s no confusion about what the defense will look like in Tampa Bay. Both Frazier and Lovie Smith come from the Tony Dungy Tampa 2 school, and although Lovie’s Bears moved away from Cover 2 in his last few seasons in Chicago, we still know the Bucs will ideally run a 4-3 that doesn’t involve a lot of blitzing. According to Football Outsiders, the Bears and Vikings ranked sixth and seventh, respectively, in percentage of plays using exactly four rushers in 2012. There isn’t a Julius Peppers or Jared Allen on the Tampa Bay roster, which may force Frazier to get a bit more creative in manufacturing pressure, but elsewhere, the Bucs look a lot like they did back in 2002. Derrick Brooks and Warren Sapp seemed to do all right in this defense; I think Gerald McCoy and Lavonte David will, too.

The Kubiak choice in Baltimore is much less of a logical fit. Why the Ravens would want wholesale changes in their offensive approach makes sense. They finished 30th in offensive DVOA last year (and 32nd when weighing the importance of games later in the year), and their offensive line shoulders a lot of that blame. Moving to Kubiak’s zone-blocking scheme is about the most radical change a team can make, but in this case, it comes with some real complications. It takes players years to get comfortable in Kubiak’s system, and because it’s likely the Ravens bring in some new bodies up front, they’ll have players learning a new offense while also having to learn about each other. I’ll admit it’s already easy to envision Joe Flacco launching deep skinny posts to Torrey Smith off play action, but the running game (and even Ray Rice’s role in it) might take some time to develop.

Cleveland is also looking at a zone-based approach under former Kubiak pupil and new offensive coordinator Kyle Shanahan, but that shouldn’t be a major departure from what they did under Rob Chudzinski. The more interesting situation in all that shuffling is former Browns OC Norv Turner and his downfield passing game heading to Minnesota. Turner has said he wants to build an offense that can spread things out to make things easier on Adrian Peterson, but that starts with having a quarterback defenses have to bother game-planning for. Cordarrelle Patterson’s role in Turner’s offense is definitely intriguing, though. He and Josh Gordon are very different players, but Turner at least showed he didn’t have a problem doing everything he could to get the ball in the hands of a dynamic receiver.

Two other coordinator hires worth mentioning: Gregg Williams (Rams) and Rod Marinelli (Cowboys). It probably would have made sense for the Cowboys to just hire Marinelli, who was promoted from defensive line coach, as their coordinator last year. The Bears finished the 2012 season no. 1 in defensive DVOA under Marinelli, who was offered a chance to say in Chicago but turned it down. In 2010, his first season calling plays, the Bears jumped from 21st to fourth.

Williams is a more curious choice in St. Louis. The Rams actually hired him two years ago, before he was suspended for the entire season and never actually got to coach. He’s back, but in those two years, the Rams have transformed into a team that seems like it contradicts what Williams has always done as a defensive coordinator. No team in the league sent more big blitzes (six-plus rushers) than the Saints in 2011, according to Football Outsiders. Last year, the Rams had the best adjusted sack rate in the league, thanks mostly to Robert Quinn. St. Louis gets pressure with its front four better than any other team in the league. Its problems lie in what’s going on behind them. Being able to terrorize quarterbacks without blitzing is a great luxury in the NFL (ask the Seahawks), and it’s one the Rams shouldn’t walk away from.

The Browns Get Their a Man

That subhead is the only joke I’ll make. I promise. Cleveland’s coaching search became something of a punch line from the moment Rob Chudzinski was fired, and it’s hard to keep track of exactly how far down their original list Mike Pettine sat. But the truth about head-coach hires is that no one really knows anything. A guy who got his start at New Hampshire and a former CFL coach turned out to be excellent choices a year ago, and Pettine’s background is similarly strange.

A high-school coach a decade ago, Pettine has spent the past few seasons coordinating some of the best defenses in the league. Play-calling duties went back and forth between him and Rex Ryan during their time with the Jets, but when New York finished second in DVOA in 2011, it was reportedly with Pettine at the helm. I mentioned it up top, but in his first season with the Bills, Buffalo finished fourth in defensive DVOA and made a habit of getting after opposing quarterbacks. The Browns have both Joe Haden and a few capable pass-rushing options already in place, and we’ll see if Pettine can engineer the type of turnaround he did with only one season in Buffalo.

The Browns’ struggles to find a head coach were widely publicized, but the more disheartening search was probably in Miami, where more than one person turned down the general manager job on the same day. Titans vice president of personnel Lake Dawson said the “the details of the offer didn’t align with my vision,” which is a nice way of saying there are serious reservations about the power structure in Miami. Whether it was Stephen Ross’s stated involvement, the general manager’s power to fire the head coach, or executive vice president Dawn Aponte’s role in personnel matters, something was enough to scare off Dawson, the Patriots’ Nick Caserio, and Browns assistant GM Ray Farmer. Miami eventually landed on former Tampa Bay director of player personnel Dennis Hickey, who reportedly wasn’t even considered for his former boss Mark Dominik’s job when the latter was fired this offseason.

Enthusiasm for that hire has been predictably mixed, and Hickey will have his share of challenges right away. The Dolphins have a host of free agents in-house, and former GM Jeff Ireland left him a welcome gift that includes several objectionable deals. The man who actually took over for Dominik seems to be in a much better spot.

Jason Licht (pronounced “Light”) was the Cardinals’ director of player personnel before being hired by Tampa Bay last month. Two years ago, he was actually one of the final two candidates in the Bears’ search for a general manager. Part of the interview process included meeting with Lovie Smith, who was in the same spot across the table this time around. Only this time, Licht got the job. Licht’s background includes stints with the Patriots in the early 2000s and five years in Philadelphia following his time in New England. He’s learned alongside Bill Belichick and Andy Reid and was part of the Cardinals’ impressive turnaround to 10-6 a year ago.

As Licht mentioned in his introductory press conference, he had a front-row seat for Cardinals general manager Steve Keim’s first year on the job last season — an experience that should go a long way in helping ease his transition. Licht also said he was impressed with what he’d seen from Mike Glennon so far, and although that’s an obligation for any new GM, Licht does have a considerable base of talent with which to work in Tampa Bay. The Bucs got the man they wanted, and it’s because they were offering a job anyone would want.

"I don't see us making any moves," he said when asked about whether or not he'd like to see this team keep its core together for the rest of the season. Williams then went on to add, "last time I said that, I think, I got traded," laughing and adding, "that's the quote for the day."