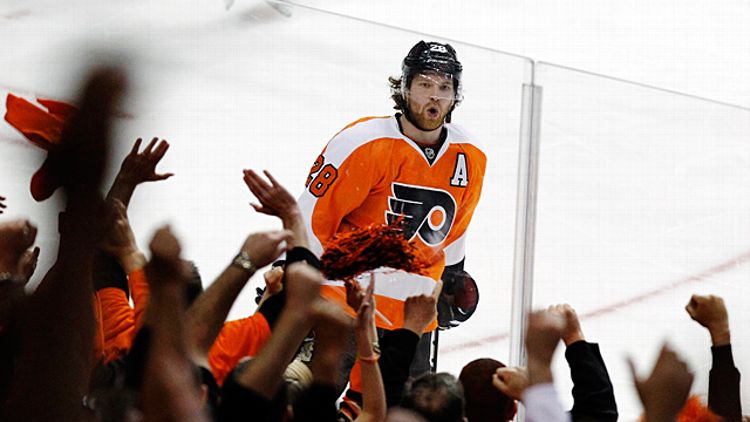 With the NHL season finally getting under way Saturday, one of the most critical early factors will be conditioning. Who’ll be ready to hit the ground running on Day 1, and who’ll need some time to get back to his usual output level?

That doesn’t just apply to players — fans will also have to ease themselves back into regular-season shape. For example, the NHL is serving up 13 games Saturday. That’s just way too many for a typical fan who’s still shaking off the lockout rust. Try paying attention to every one of them, and you’re going to tear a groin.

Pace yourselves, hockey fans. Here are five games to focus on during the NHL’s long-awaited opening day:

The matchup: (3 p.m. ET) The Flyers and Penguins square off in a rematch of last year’s first-round playoff series, which might have been the best hockey in years, in terms of pure entertainment value. The two teams racked up goals and penalties en route to a Flyers upset (or not, according to NBC) that cemented this pairing as one of the best rivalries in hockey.

Why you should care: Because these are two of the best teams in the league, and they hate each other.

Who to watch: New Flyers captain Claude Giroux was briefly awarded “best player in the world” status after dispatching Sidney Crosby and the Penguins last year, because apparently we all decided that title gets passed on from loser to winner like a boxing belt. Since then, everyone’s regained their sanity and moved Crosby back to the top of their lists, and that might inspire Giroux to put on a show.

What we’ll learn: After piling up points in the KHL, how dominant will Evgeni Malkin be against NHL opponents who just got off the couch? Will either goalie go off script by mixing in a save or two? Can Scott Hartnell stay upright for an entire shift? And how long will it take for the first fight to — oh, never mind, they’ve all started punching each other already.

The matchup: (7 p.m. ET) Two teams that were awful last year and will probably be awful again this year! Um, this is probably why I never get asked to write promos for Hockey Night in Canada.

Why you should care: Because it’s the Leafs and Habs. Seriously, what’s wrong with you?

Who to watch: Carey Price is one of the best young goaltenders in the game, and he has a brand-new contract to prove it. If he struggles, notoriously cranky Habs fans will worry. If he’s stellar, confused Leafs fans will ask why the guy in the mask and pads keeps stopping pucks from going into the net.

What we’ll learn: Which team gets to lose its opening game and send its voracious local media into full-fledged panic mode?

The matchup: (7 p.m. ET) The top two seeds in last year’s Eastern Conference square off in an early showdown.

Why you should care: Along with the Penguins and Flyers, these are two of the four favorites for the Eastern Conference crown. Also, after everything that went down during the lockout, there’s a good chance Jimmy Dolan will try to fight Jeremy Jacobs.

Who to watch: Young Bruins goaltender Tuukka Rask begins his quest to replace the 2009 and 2011 Vezina winner (Tim Thomas) by facing the 2012 Vezina winner (Henrik Lundqvist). Can he get his season off to a strong start by staring down Lundqvist? Probably not, since it’s impossible to stare at Henrik Lundqvist for an extended period of time without suffering heart palpitations. So dreamy.

What we’ll learn: Rick Nash: superstar set to take his game to dominating new levels now that he’ll finally be playing with a more talented team? Or overpaid, overrated player who got a pass for years because nobody paid attention to Columbus? Let’s watch one game and then decide!

The matchup: (8 p.m. ET) It’s a classic Norris Division battle! [Realizes half of you are too young to know what the Norris Division is. Curses Gary Bettman. Grumbles about kids these days while hiking up pants around waist.]

Why you should care: The Red Wings and Blues both figure to be elite teams in the West, but both come into the season with some major question marks. The Wings are getting old and will be without legendary defenseman Nicklas Lidstrom for the first time in 20 years. Meanwhile, the Blues were a pleasant surprise last year, thanks mostly to freakishly good goaltending — are they true contenders now, or does Brian Elliott turn back into Brian Elliott?

Who to watch: Pavel Datsyuk is 34 years old and was one of the players rumored to have considered staying in Russia when the lockout ended. He’s also arguably the most skilled player in the league. His decline has to come sooner or later, but he’s so much fun to watch, so here’s hoping it’s not this year.

What we’ll learn: Can a team be a Cup contender when guys like Ian White and Carlo Colaiacovo are being counted as top six defenders? Oh, wait, we already learned that one.

Why you should care: First of all, banner-raisings are just cool. I want to raise a banner in my living room someday. I’m totally doing that if/when I ever accomplish anything. Oh, and the teams are pretty good, too.

Who to watch: Corey Crawford and/or Ray Emery, whoever gets the start for Chicago. The Blackhawks are stacked up front and solid on the blue line, but goaltending has been a question mark for years. Admittedly, those years include 2010, when they rode Antti Niemi to a championship before dumping him in the offseason due to cap concerns. So the Hawks don’t need an excellent goaltender to contend … just a decent one. The jury’s still out on whether Crawford or Emery can be that guy.

What we’ll learn: How crazy will the Los Angeles market be for hockey less than four short months after seeing the Kings claim their first Cup? Oh, sorry, that’s what we would have been learning if Gary Bettman hadn’t decided to destroy momentum in one of his largest markets with a completely unnecessary lockout. Top-notch work as always, Gary.

The Five Players Who Could Revamp the Spurs' Title Chances