You Really Shouldn’t Be Watching Judo 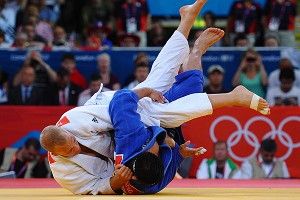 You turn to your wife. “I’ve had it, Karen. I’m going to go give that sumbitch a piece of my mind.”

“Now, Darryl, just come back to bed,” she responds. “We don’t need no trouble.”

Her words fall on deaf ears. You throw on your bathrobe, storm down the stairs, and make your way to your neighbor’s driveway. As you approach, he comes out from underneath the hood of his car to reveal that he’s also in his bathrobe. “Hey, Darryl,” he says enthusiastically. “You here to help out? I’ll go get you a beer.”

“Cut the crap, Rusty,” you tell him. “You know why I’m here. It’s two in the morning. Turn that damn radio down or I’ll turn it down with your face.” Not exactly the best insult you could’ve come up with, but you’re more concerned with getting your message across than being creative. You continue, “And for the love of God, why are you working on that trashy Camaro anyway? The thing is a ’99 with 200,000 miles on it. If I took a dump in the glove box, it would probably go up in value.”

“Whoa, Darryl. I’ll turn the radio down just because I’m a decent guy. But where I’m from, insulting a man’s Camaro is grounds for an ass-whooping. And if an ass-whooping is what you’re looking for, you’ve come to the right place.”

Nothing else needs to be said because at this point it is quite clearly on. You both roll up your sleeves, put your fists up, and wait for the first move to be made. Then, after 30 seconds of posturing, you simultaneously go in for the kill.

One problem, though: Neither one of you has ever been in a fight, so what ensues is more of a 12-year-old girl hand-slapping fight than a brutal bear-knuckled brawl. Over the next 10 minutes, you and Rusty continue to slap hands, the top of both of your robes come undone, and you give each other a few bear hugs while unsuccessfully trying to tackle each other. Somewhere along the line, your wife yells at you to stop fighting as she runs toward you from your front yard. “Dammit, Karen,” you yell back, “I’m defending my family’s honor, so just stay back and let me handle this man-to-man!”

Every once in a while, one of you takes the other to the ground, but every time this happens, the guy who gets taken to the ground stops the fight by faking a serious injury. That same guy then makes a miraculous recovery as he stands back up and the fight starts back over from the top with some more hand-slapping. Finally, you catch Rusty off guard, wrap him up with a bear hug, and drop him to the ground on his back. You then immediately let go, stand over him, and emphatically say, “Suck on that, Rusty.”

With your head held high and a sense of victory overwhelming you, you put your arm around your wife, and as you walk back to your house you say, “I sure showed him, didn’t I, babe?”

This might be hard to believe, but the hypothetical and pathetic fight that I just described is remarkably similar to how the Olympic sport of judo works.

I’m a fan of martial arts just as much as the next guy, as evidenced by the fact that I have classics such as Beverly Hills Ninja and Rush Hour 3 in my DVD collection. And I have no doubt that a judo black belt could kick my ass without breaking a sweat. But it needs to be said that judo is brutally boring to watch. After falling in love with handball last weekend, I made an effort to watch less swimming, gymnastics, and basketball this week and instead focus my attention on finding another obscure Olympic sport to get hooked on.

I was hoping judo would do the trick because, with it being a martial art, I assumed it would basically be a toned-down version of UFC and I would get to see some ass-kicking and slobber-knocking. The sad truth, though, is that judo is basically just guys slapping hands, giving hugs, and messing up each other’s robes. Even in the rare instances in which one fighter would take another to the ground, the ref would always stop the fight and make them both start back over, destroying my hopes of seeing an elbow to the face or at the very least a Bret Hart Sharpshooter.

Now, it should be noted that, like I did with handball, I watched each of these judo matches without commentary, so I had a difficult time understanding the rules and what each fighter was trying to accomplish. (If you’re looking for a similar experience, this 2011 match doesn’t have commentary either.) With that, I’ll admit that there are probably intricacies to the sport that were lost on me. However, there are a bunch of sports I don’t completely understand, yet I can still watch without commentary and be entertained. Judo, though, was painfully boring for an ignorant, average Joe like myself, and it seems like the lamest and most impractical martial art in existence. Put it this way: Based on what I saw this week, if a guy confronted me in a dark alley, demanded that I give him all the money I have, and threatened me by saying that he’s a judo black belt, my immediate response would be, “So if I don’t give you my wallet, you’re going to try to give me a hug and untuck my shirt?”

Anyway, the point is this: With Friday being the last day of judo in this year’s Olympics, if you missed any of the matches, trust me when I say that you didn’t miss much. As of now, it’s by far the most boring sport in the Olympics (yes, I’ve watched field hockey, badminton, archery, and fencing), which is a title that only race walking will be able to take from it. I’m sure it’s fun to participate in, and if you’ve had any judo training it’s probably fun to watch, but if you’re a judo newbie like me you probably would’ve thought that the concept of the sport is to have two people with no fighting experience fight each other in robes and avoid hurting each other at all costs.

Of course, this might not be too far off from what judo actually is, considering that all you really need to know about the sport is that the word “judo” honest-to-god means “gentle way” in Japanese.