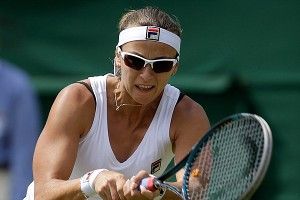 Of all the strange events that took place during the first week of Wimbledon — right down to the theft of Rufus the hawk — the most unbelievable was Yaroslava Shvedova’s flawless set against Sara Errani, the French Open finalist, on Saturday. The so-called “golden set” was almost unheard of: Shvedova became the first woman, and only the second person, to achieve it during the Open Era.


“To me, that’s almost as improbable as Isner-Mahut,” Sam Querrey said, when he heard of Shvedova’s feat. That’s saying something, considering Querrey had just clocked the second-longest match in Wimbledon history in only half the time that it took John Isner to defeat Nicolas Mahut at the All England Club in 2010.

More improbable: Shvedova had almost done it before. She was a perfect 5-0, 40-0 against Amy Frazier at a 2006 tournament in Memphis before double faulting.

Even more improbable: Shvedova went on to lose that match, 1-6, 6-0, 6-0. Imagine a pitcher coming within an out of a perfect game — and then walking off the field with ten earned runs. (Shvedova beat Errani, 6-0, 6-4, this weekend but lost to Serena Williams on Monday.)

Still more improbable: Shvedova says that she does not remember that match in Memphis. “Don’t remember Memphis, even,” she said.

Most improbable: I’m not sure anybody noticed! Shvedova’s golden set in the third round at Wimbledon has produced even more buzz than the possessed play of Lukas Rosol against Rafael Nadal in the second round, and yet when she almost she did it in Memphis — and suffered an almost equally startling collapse — it seems like it was a non-story. I haven’t been able to find a single clip still online, a single incredulous column.

When a tree falls in Memphis, I guess …

About Last Weekend: Tiger Roars Past the Bear