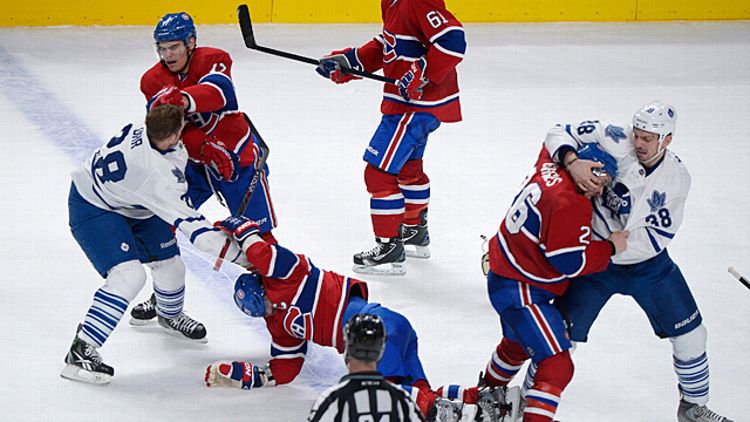 We’re getting close to the end of the NHL regular season, and the postseason scenarios are rapidly taking shape. Teams are clinching spots, the death watches have begun, and fans of playoff-bound teams are already looking ahead to possible first-round matchups.

But of all the potential pairings, one looms above the rest: the Toronto Maple Leafs facing the Montreal Canadiens.

According to Sports Club Stats, a Leafs-Habs pairing is the most likely first-round series in the league right now, at just slightly better than a 50 percent chance. Is that enough to call it a sure thing? Not at all. Is it enough to prematurely crank up the hype machine? Oh, baby.

Here are 10 things you need to know about a potential playoff meeting between the Maple Leafs and Canadiens:

But with all due respect to those teams and others, nothing can match the history of the league’s oldest rivalry. The two teams have combined for more than 30 Stanley Cups, including 13 of 14 between 1956 and 1969, and each have more than 50 players in the Hall of Fame.

And yes, this is the part where you point out that all that happened decades ago and doesn’t matter much today. To which the hockey world responds: Pull your pants up, you insufferable brat. If you’re a hockey fan, especially a Canadian one, this is the rivalry your grandparents’ generation grew up with and passed down. No matter where you are or what team you cheer for, the history of the Maple Leafs and Canadiens is a big part of why you’re a fan.

It would be their first playoff meeting since 1979.

Despite being the most storied rivalry in hockey, the two teams haven’t actually met in the playoffs in more than 30 years. That’s partly because they were in different conferences from 1981 until 1998, and partly because of their odd pattern of rarely being good at the same time — this will be only the third time in 15 years that both teams made the playoffs in the same season.

The Habs were in the middle of a dynasty for the two meetings in the late ’70s, and swept both series. Prior to that, the two teams met five straight years from 1963 to 1967, culminating with an upset Leafs win for their last Stanley Cup. They also met in four finals between 1947 and 1960.

In total, the teams have met in the playoffs 15 times (with the Habs winning eight). But that number should be 16, because …

They should have met in the 1993 finals.

That was the 100th anniversary of the Stanley Cup, and it was the year that both teams went on miracle playoff runs that seemed to have them destined to face each other in the finals. The Habs held up their end of the bargain, but the Leafs fell just short, thanks to a controversial missed call followed by a painful Game 7 loss at home to the Kings.

Fun tip: If you ever find yourself in the company of a group of Leafs fans and Habs fans at the same time, ask them who they think would have won a Toronto-Montreal final in 1993. Then sit back and enjoy as the two sides engage in a rational discourse on the strengths and weakness of each team that lasts for 18 straight hours and ends up with someone smashing a conch.

Every previous time they’ve met in the playoffs, the winner of the series has won the championship.

In each of the 15 previous meetings, the team that won the series went on to win the Stanley Cup (or one of its predecessors) every single time.

Now granted, that fact is a little less impressive than it looks at first glance. Six of the meetings were in the finals, and most of the rest were in the semifinals (it was a six-team league).

This rivalry symbolizes some deep-seated Canadian cultural and political divisions.

You don’t actually need to know what those issues are — most of today’s Canadian hockey fans don’t really know what they are. But you do need to be prepared to hear about them, because earnest sports reporters are going to try to force them into stories to make the rivalry feel like it’s something bigger than it is.

As a rule of thumb, if you’re reading an article about the series and you see the words “Plains of Abraham,” quietly close the tab on your browser and go find someone who takes sports a little bit less seriously.

They’ve even written a children’s book about it.

A horrible, horrible children’s book, which every Canadian child is forced to read even though it’s clearly nothing more than pro-Habs propaganda. (Hey, kid, spoiler alert: Your mom ordered that Leafs jersey from Mr. Eaton on purpose because she wanted to get you to stop diving all the time.)

Nobody’s going to pay any attention to the other Canadian teams, and it’s going to make them furious.

OK, there’s an outside chance that the Canucks will get some coverage out west, since they insist on playing their games in the middle of the night when all decent people have already gone to sleep.

But wait until you see how furious Senators fans get when their series against the Capitals or whoever is broadcast by the CBC’s ninth-stringers on a local cable access channel, and every edition of Canadian SportsCentre is 29 and a half minutes of Leafs-Habs coverage followed by the phrase “in other news, Erik Karlsson returned to the lineup tonight and scored six goals, which we don’t have time you show you. Good night!”

They’re probably writing their angry blog posts and letters to the editors already. It’s going to be adorable.

There’s plenty of bad blood between this year’s teams.

The teams have played four games so far this year, with the Leafs winning three. That includes a 6-0 blowout in Montreal on February 9 that featured multiple fights, as well as an important teachable moment about whether or not it’s a good idea to casually skate up to Colton Orr when he has his gloves off. (Answer: No, it is not.)

That game marked a turning point in Montreal’s season — it immediately won five straight and closed out February by beating the Leafs, 5-2, in Toronto. The Leafs responded by lighting up Carey Price on Saturday in a 5-1 win that also had its share of animosity.

The two teams play one more time during the regular season, in Toronto on the final night of the schedule. That game could be the one that determines who plays whom in the playoffs. Or it could be a meaningless game between two teams that are already guaranteed a postseason rematch. And if so, look out. It might get ugly.

A Habs-Leafs series could turn into the Mikhail Grabovski show.

If you had to choose one player to emerge as the main character of a Habs-Leafs series, bet on Toronto center Mikhail Grabovski. That’s not to say that he’d be the best player or even an especially important one. But he would be a fun one to watch, because Montreal Canadiens fans absolutely hate him.

Grabovski was drafted by the Habs but never showed much in Montreal, and his immaturity didn’t exactly endear him to his teammates. He was traded to the Leafs for a draft pick, where he eventually developed into a steady contributor. Ever since, he’s been front and center at every Habs-Leafs matchup, whether it was his rivalry with the Kostitsyn brothers, scoring ridiculous goals in overtime, or flipping off Montreal fans.

Oh, and earlier this season he appeared to bite one of the Habs’ best players. So there’s that.

Luckily for Habs fans, they’re not the only people who harbor an irrational hatred of Mikhail Grabovski. Leafs coach Randy Carlyle does, too, so there’s a decent chance he’ll be randomly benched at some point. But until then, he’ll be ready.

If this series actually happens, Canada might just shut down for a few weeks.

Sorry, America, you’re going to need to figure out how to make your own maple syrup and sketch comedy for a while. Our fine nation should be back to normal by Round 2.

Well, the half of the country that still exists, at least.