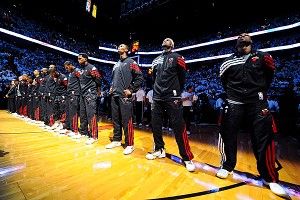 This has not been a great year for basketball purists, otherwise known as the old guys at the sports bar who complain about players’ tattoos and use corny phrases like “he tried putting a little too much mustard on that hot dog” when someone throws an errant behind-the-back pass. In April, Kentucky coach John Calipari’s “one-and-done” approach finally worked, as the Wildcats won their eighth national title on the backs of mostly freshmen and sophomores, despite the prevailing thought that it takes chemistry and experience to win championships in college basketball. And now, almost three months later, the Miami Heat are poised to win their first NBA championship since Pat Riley held up two middle fingers to the rest of the NBA in the summer of 2010 with his “get three max-contract guys on the team and figure out the rest later” strategy, which critics said wouldn’t work because the Heat were too top-heavy and the egos of their three All-Stars would almost certainly clash. (Oh, and let’s not forget about that dadgum girl from Baylor ruining the women’s game this year with all her hocus-pocus slam dunks and what have you.)

Yes, Kentucky and Miami redefined what it takes to win basketball championships this season, and the landscape of the sport as a whole might not ever be the same because of it. But while many will point to Calipari’s and LeBron James’s first respective championships as proof that the Mayans were right, and will complain that basketball as we know it is gone forever, I, for one, am embracing the change.

Now, before I go any further, let me make it clear that thanks to my Indiana and Ohio roots, I’m a Wildcat and Heat hater just as much as the next guy. So don’t interpret this as me saying it’s wrong to dislike them. Any team that completely abuses the loose butthole monocle and is coached by a guy who has had two Final Four appearances vacated deserves all the hate that comes its way, as does any team that is responsible for this. That said, I respect both teams for going against the grain to win their championships (assuming the Heat do win tonight) and I’m excited about other teams potentially following the precedents they each set, because the truth is, this year Kentucky and Miami provided some of the most entertaining basketball I’ve ever seen.

And that’s what this all comes down to — entertainment (individual talent) vs. “winning the right way” (playing as a team). Traditionalists are worried that if college basketball’s blue bloods become revolving doors where blue-chip recruits make pit stops before going to the NBA, it will be impossible to establish the concept of team and the overall product will suffer. (Not to mention the fact that there will be a disconnect between the players and fans since the players leave before the fans really get to know them.) Similarly, NBA purists fear that once teams try to load up on elite players, the game stops being about who has the best team and instead becomes a contest to see who has the best two or three players. Plus, there are the issues of thinking that elite players are supposed to win championships on their own (“Jordan would never have teamed up with Magic or Bird!”) and there are only so many elite players to go around, so if teams start stockpiling them, parity will no longer exist in the league.

These are legitimate concerns, but my rebuttal is simple: Hating Kentucky or Miami for the way they assembled their rosters is entirely hypocritical, because if your favorite team had the chance to follow in their footsteps, you’d be thrilled, and you’re lying to yourself if you think otherwise. This is obviously especially true for fans of bad teams, but I’m guessing even most fans of good teams would trade entire rosters with the Heat without hesitation. Think of it this way: Even though the Celtics had a good thing going and knocked LeBron out of the playoffs in two of his last three years with the Cavs, if Boston somehow had the opportunity to blow up their “Ubuntu” team to get LeBron, Dwyane Wade, and Chris Bosh in 2010, you bet your ass Celtics fans would’ve gone crazy. Sure they would’ve thought, It sucks to see all the guys who brought us a title in 2008 go, but they almost certainly would’ve followed up that thought with: But screw it — we got LeBron, D-Wade, and the Boshtrich!!!

And the huge reason they would’ve been fine with it is because as much fun as it is to cheer on a winning team, it’s even more fun if that winning team has three of the top 15 players in the league — players who provide endless highlights night in and night out. This is why so many people think the Spurs are boring even though they’ve probably been the best, most consistent team in the NBA during Tim Duncan’s career. Those of us who pay attention to the intricacies of the game appreciate how the Spurs play, but there’s a reason SportsCenter shows the top 10 dunks instead of the top 10 instances of guys making the extra pass, the top 10 bank shots, or the top 10 screens. The truth is most people — myself included — would rather watch electrifying fast breaks, fadeaways, alley-oops, and highlight reel dunks over fundamentals any day, especially since I’m pretty sure “fundamentals” is a concept that was made up by some short, slow guy who sucked and couldn’t think of anything else he brought to the team.

But most importantly, hate your team for not thinking of and/or executing this blueprint first. Sure, three guys doing all the work and having no bench to speak of might not be the basketball that Dr. Naismith had in mind or the basketball that guys like John Wooden and Phil Jackson mastered, but after tonight, the Heat will have proven that it gets the job done. They’ve already proven that it’s entertaining as hell, and that’s really all that should matter anyway.