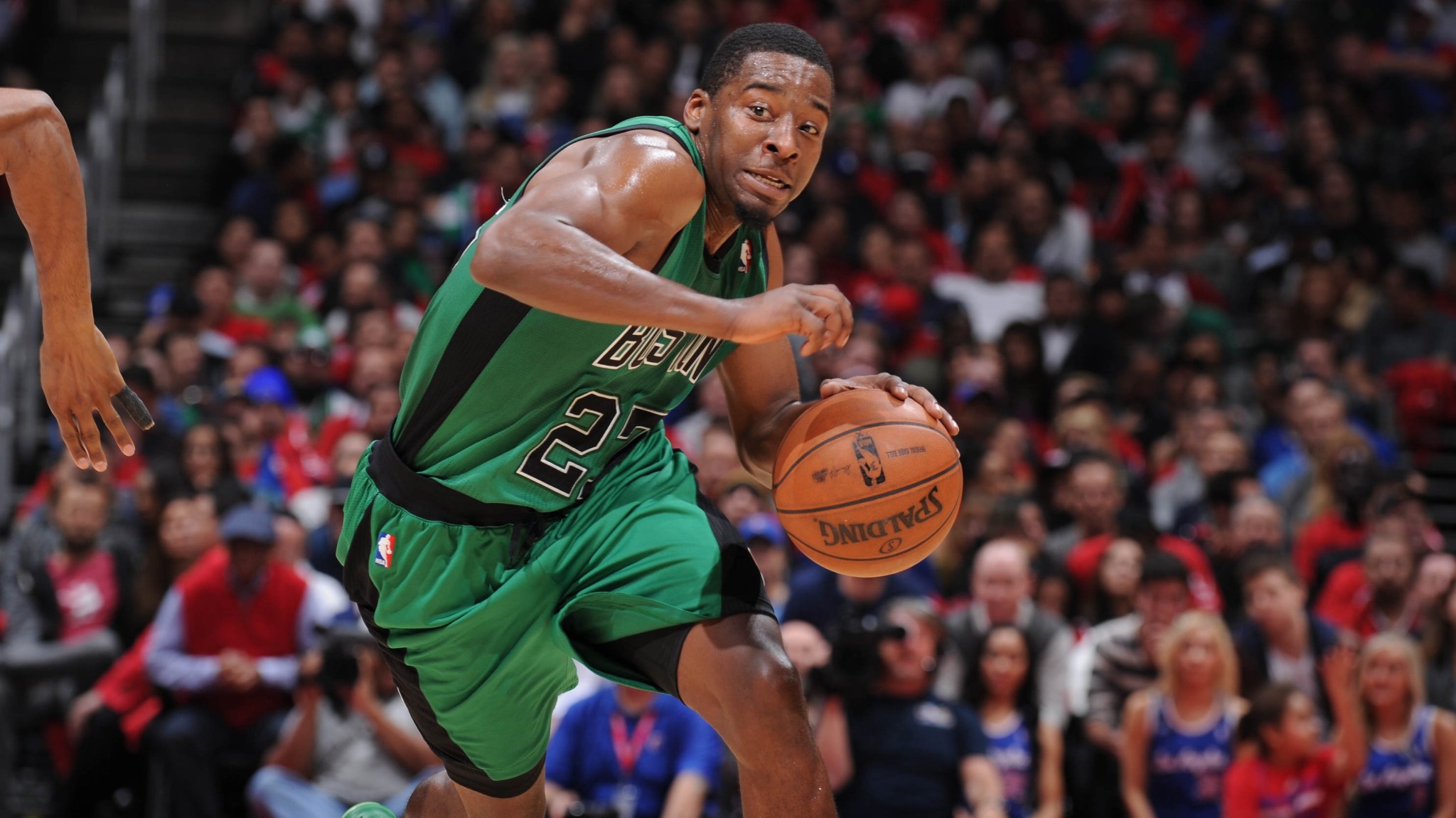 The wheeling, dealing, game-losing Boston Celtics just haven’t been able to wait until the trade deadline to deal relevant pieces and save some scratch. And so we have a funky little three-team deal involving two legit title contenders — yeah, I said it again — and a Boston team that may not be done dealing for the season.

• Boston gets Joel Anthony, a small uptick in popularity in Canada, a second-round pick from Miami, and a heavily protected first-round pick the Sixers traded to the Heat on draft day 2012.

Let’s go in order of each team’s current place in the league hierarchy.

Anthony makes $2.2 million more than Douglas this season, but that $2.2 million means far more than that to Miami, which was nearly $12 million over the tax line before this deal. The tax rates jump in increments of $5 million, and Miami before the trade was about halfway into the third tax band — the one that penalizes teams $2.50 for every dollar in salary north of $10 million above the actual tax. They now settle into the second tax band, which tops out at $1.75 per dollar, meaning the salary swap alone saves them about $5.5 million in tax payments.

Anthony also has a $3.8 million player option for next season, and since he’d make roughly one-third of that on the free market (if any team signed him), he’s a lock to exercise it. Douglas is not under contract for next season. Nearly the entire Heat roster is set to enter free agency this summer, so it’s impossible to tell exactly what Miami’s cap sheet will look like. But shaving away that $3.8 million could make a huge difference in helping Miami either add another rotation player via the mini midlevel exception, re-sign Mario Chalmers, or both.

The Heat have been scrounging around for another ball handler, and made some initial inquiries on Kyle Lowry and a couple of other bigger names, per sources around the league. But with nothing to offer, they got nowhere. Douglas is the kind of little guy who theoretically fits Miami’s system on both ends. He’s quick, and he’s a ballhawk who can jump passing lanes, pressure ball handlers, and generally run around a lot in ways the Heat’s defensive principles require.

He has been a league-average 3-point shooter who could do better given open spot-up looks, and the Heat would never ask him to work as anything like a ball-dominant primary backup point guard — a role in which he failed, badly, this season in Golden State.

Alas. Miami already has two players who do all that stuff better in Norris Cole and Chalmers, and those two have years of familiarity with Miami’s unique way of life. Douglas may not be long for this team, though he’s intriguing enough to at least make Miami think about which player they’d miss least — Douglas or Roger Mason Jr. — in the event they cut someone to open a roster spot.

Mini-prediction: One of those guys, probably Douglas, will go in order to make way for Andrew Bynum. The big fella cleared waivers long ago, the Clippers (another possible Bynum suitor) are on the verge of signing Hedo Turkoglu (BALL), and we’ve yet to see Greg Oden in a real basketball game. Regardless, this is a no-brainer for Miami. They traded a guy who was never going to play, despite his prodigious pick-and-roll defense skills, and saved a ton of money.

The Dubs are all-in, and as I wrote on Tuesday, it was only a matter of time before they acquired a backup point guard. Douglas couldn’t handle the role, though he missed about a third of the season to date with an injury, and it was possible he’d grow into it if given time. Kent Bazemore, the most famous Las Vegas Summer League star, has never proven he can shoot from deep or be trusted with the ball in the real NBA. There were times this season when he struggled just to get it over half court and/or throw a simple entry pass. He appears to be a defensive specialist capable of extended minutes when he’s rolling a bit, but not a backup point guard.

Enter Jordan Crawford, who fell for a Brad Stevens mind trick and became a serviceable primary ball handler for much of this season in Boston after the Celtics concluded Avery Bradley couldn’t do the job. Crawford has always been a score-first guy with shot selection that ranges from “catastrophically bad” to “less catastrophically bad,” but he legitimately dialed it back this season in order to earn some playing time and prove he belongs in the league. He has assisted on 31 percent of Boston baskets while on the floor, a respectable mark for a point guard, and three Boston rotation players — Jared Sullinger, Jeff Green, and Avery Bradley — have used a higher share of Boston possessions via shot attempts than Crawford. Progress!

But he has fallen off a bit, and his creative passing has limits — self-imposed and otherwise. He’s down to 31 percent from deep, well below the league’s average, and he’s been ice-cold from the floor over his last 10 games or so. The bouts of bad judgment will always be an issue, and Crawford is a spacey liability on defense.

But he’s an upgrade over Douglas, he comes for (nearly) free, and the Warriors won’t need him to play more than 10 or 12 minutes in postseason games. For now, Crawford will help steady the all-bench units, involving five reserve players, that have struggled horribly on offense and produced a pile of bad Harrison Barnes isolations. Crawford won’t transform those units into scoring machines, but he can get into the lane, create for others, and produce a decent look when the team is up against the shot clock. Golden State fans hate the bench mobs, and with good reason, but playing them all together is a regular-season way for Jackson to ensure that his starting lineup — still relatively new, remember — gets maximum together time. (In theory, Iguodala should probably be captaining those bench units as the lone starter, allowing Douglas/Crawford to work more off the ball. But that hasn’t happened in practice.) The bench units won’t exist in the playoffs, but Crawford will in a small role, hopefully captaining hybrid starter-reserve groups while Stephen Curry rests. The Dubs could use Curry and Crawford together, but with Andre Iguodala around as the souped-up Jarrett Jack, that’s not really going to be a thing.

The only downside: adding $1.7 million to this season’s payroll. But they’re still about $2.7 million under the tax, in case a minimum-salary sort of thing comes up, and they control Crawford’s restricted free agency this summer. Brooks is a flyer who can’t defend and likely won’t play much. Miami’s participation allowed Golden State to do the deal without giving up a pick — good thing, since they’re already out two first-rounders to Utah, and they’ve already dealt away every one of their next five second-round picks. Like I said: They’re all-in.

The best subplot of my day: Boston fans railing on Twitter that this is a horrible deal. Umm … it’s Jordan Crawford. Do you not think the other 29 teams watch the NBA? Do you think 29 other GMs are Googling “Jordan Crawford,” seeing his Eastern Conference Player of the Week honor, and asking their owner how many first-round picks they might give up for him? Do you think those GMs are unaware Brooks hasn’t been able to get on the floor at all this season for a very bad NBA team?

There was zero chance Boston was getting a first-round pick for Crawford and Brooks. Zero. The Bulls didn’t even get a guaranteed first-round pick for Luol Deng. The Magic didn’t get one for J.J. Redick. Teams are hoarding first-round picks like Ron Swanson hoards his buried gold. And as I’ve noted before, there just aren’t many contenders or even ambitious playoff teams with a massive need at backup point guard. Crawford’s a nice little piece, but he has been very bad for most of his NBA career, and just so-so in this career year.

This is a small bounty for Boston. The second-rounder from Miami is a nice little addition, but the real prize is the first-rounder the Sixers gave Miami two drafts ago in exchange for Arnett Moultrie.

However, this is not an automatic first-rounder, and may end up as a fake first-rounder. It’s lottery-protected in each of the next two seasons, meaning the Sixers keep it if they miss the playoffs. If they miss the postseason both this year (duh) and next, the pick morphs into two second-rounders that would go to Boston.

Never underestimate the horribleness of the Eastern Conference. The Sixers will almost certainly have two lottery picks in this draft — their own and the one they acquired from the Pelicans for Jrue Holiday. That pick is top-five protected, and given New Orleans’s injury issues, it could fall somewhere around no. 8 or no. 9. Nail those picks, get Nerlens Noel healthy, and sign the requisite cap-fodder veterans, and it’s not out of the realm of possibility that Philly crawls into a low-end playoff spot next season — sending Boston a first-rounder in the process.

But Philly isn’t done trading. They’ve amped up their feelers on Thaddeus Young in the last week, per several league sources, and other execs view it as a lock that Evan Turner will be on the block — if he isn’t already. If Philly dumps enough veterans and opts against replacing them next season with equal quality, they could be pretty bad again.

But even three second-rounders is a nice haul for two players Boston wasn’t going to use long-term. Anthony’s $3.8 million deal for next season is the price, and in raw terms, that is more than the combined Year 1 salaries of three second-rounders. But Boston will have a solid chunk of cap space this summer after dumping Courtney Lee, and they could get something like max-level room if they find a taker for Brandon Bass before the trade deadline. Anthony cuts into that space a tad, but the Cs weren’t going to get that Philly pick without Miami (and Anthony) getting involved in the deal.

Using max-level cap space in a straight free-agency signing isn’t really even part of the plan here, anyway. Boston simply wants to remain flexible enough to take in salary via trade while piling up assets. This deal does the job. Teams are valuing second-round picks more highly than ever. They produce cheap players with some upside, and teams can structure their contracts in all kinds of favorable ways outside the rookie scale for first-round picks. Anthony himself will become an expiring contract next season, just another little trade ingredient for the Cs.

Losing Crawford will also make Boston worse this season, increasing their lottery odds. Rajon Rondo will be back soon to take over at point guard, but he’ll be rusty, and Boston just downgraded the backup point guard spot dramatically. Phil Pressey tries hard, but guys who shoot 24 percent and turn the ball over a lot are not exactly helpful NBA players.

This is something very much like a win-win-win, a small-scale move that could carry real meaning down the line for two contenders.