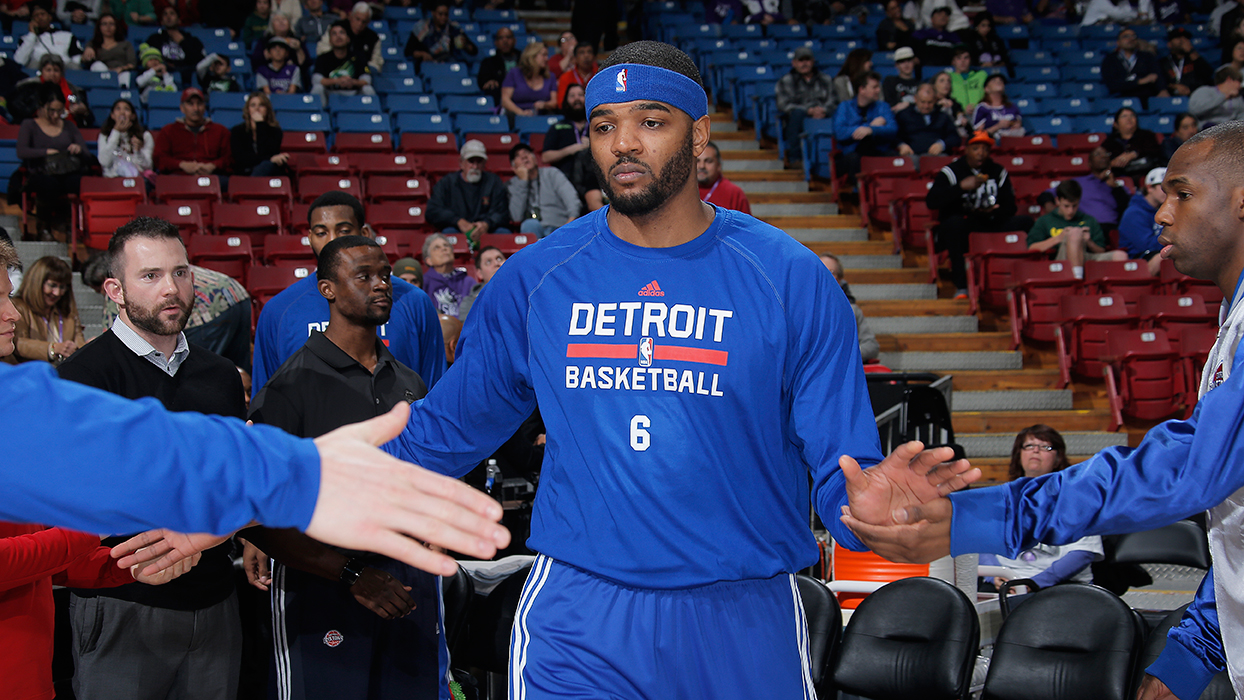 Jason Concepcion: Capping what must be the most precipitous fall from near-All-Star status with near-max-contract money to the waiver wire in modern NBA history — that didn’t involve drugs or the locker room brandishing of firearms — the Detroit Pistons have waived Josh Smith.

December 7, 2014 is, in my opinion, the moment it all went finally, irrevocably wrong. Pistons versus Thunder, final moments, a much-needed victory against a Western Conference opponent there for the taking. The ball finds who else but Josh Smith, who squares up from deep and launches a jumper like a blind goose trying to navigate by feeling which side of its face is warmer and therefore facing the sun.

Notice that not one of his teammates or coaches raises his arms in the international basketball sign for “THAT’S GOOD!” Not one. That is unheard of, at basically every level of the game down to your driveway in the summertime.

This is an amazing development. I mean, I got the news via my NBA Game Time app, literally the first non–game update notification the app has EVER sent me. Even the app knows this is mind-blowing! Smith is a former first-round pick, once selected as an NBA All-Defensive Second Team member in 2010. He came into the league as a marvel of coiled-spring athleticism, speed, power, and mobility who could block shots, pull down rebounds, run the floor, and rain soul-rending humiliation upon any defender. From 2007 to 2012, Smith averaged 16.7 points, 8.4 rebounds, 3.5 assists, a hair under three blocks, and more than one steal per game with a PER between 17.2 and a high of 21.1.

All of which is to say that Josh Smith, once upon a time and not so long ago, was a valuable (and exciting!) basketball player. He was drafted by his hometown team and wore a Dominique Wilkins jersey while southpaw windmilling his way to the 2005 NBA slam dunk title. He did a lot of positive basketball things that don’t normally come together in one package at his size.

But there has always been one dissonant note in the ballad of Smoove: He couldn’t shoot from any spatial value that could reasonably be defined as “distance,” and he seemed to be the only person on earth who was not aware of this. Complicating matters, Smith’s handle has never been refined enough to allow him to consistently create his own looks.

To be fair, being a bad shooter is not an uncommon problem for young players coming into the league. Same with poor shot selection. Smith’s best shooting season, the 2009-10 campaign with the Hawks — during which he shot 50 percent from the field with true shooting of .536 — was the result of taking basically no 3-pointers (seven total attempts!) and focusing on going to work at the rim, where he has always been a beast. That season, Josh had the third-most made dunks in the league, behind Dwight Howard and Amar’e Stoudemire. In 2012-13, Smith’s last season in Atlanta, he converted 63 percent of his close-range shots.

The answer for Smith, then, has always been simple: Take fewer shots from everywhere except close the basket. If only the answer to all of our career difficulties were so easily identified.

But life comes at you fast, and the promise of a more discerning Smith who would play to his significant strengths never materialized. And maybe he never even had a chance after he joined a Detroit roster that, with Greg Monroe and Andre Drummond, pushed Smith out to the perimeter. For a player with shot-selection issues, this was basically like asking a known alcoholic to tend bar.

The result was Smith shooting 3s at a career-high clip (3.4 attempts per game), which he converted at a lead-poisoning 26 percent. This, by the way, was among the better 3-point percentages of his career. Over the last few seasons, there have been few sounds in the world of sports as incredible as the Detroit crowd’s groans whenever Smith lets fly. To makes matters worse, he wasn’t even finishing at the rim or making a difference on defense. It’s like that Twilight Zone episode in which Burgess Meredith is the last man on earth, and all he wants to do is read books, but then his eyeglasses shatter. (In fact — Occam’s razor — someone should check if Smith actually needs contact lenses. It’s just the simplest explanation.)

How bad is it? Let’s turn this over to the inimitable Kirk Goldsberry, who has been waiting for weeks to unleash that J-Smoove shot chart fire.

Anyway, let’s start with a simple chart. Here’s every shot he’s ever taken: 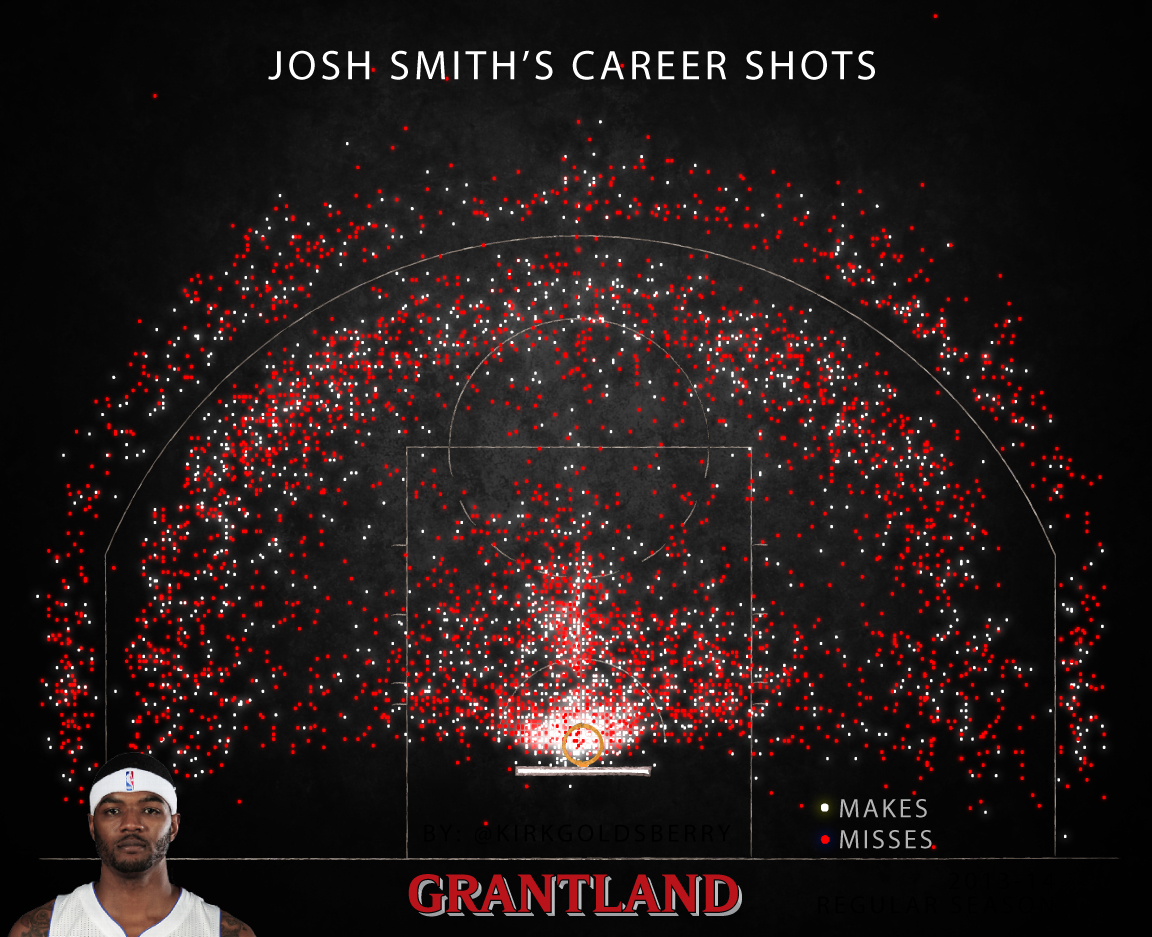 Notice all that red (misses), and the small amount of white (makes), particularly outside the paint? I assure you, that’s not good. His stubborn penchant for showcasing his terrible jump shot has been one of the strangest ongoing phenomena for years now.

As a result, every time I write about him, it’s always a variation on the same old beats: superb talent, great athlete, awful jump-shooter, terrible shot selection. Then I embed the hilariously bad shot chart and close with some hopeful sentiment like If only he could cut down on the jumpers and attack the paint where he thrives, he could break out.

Through all the repetition, I always felt that if Smith played for the right coach, he could turn it all around, the same way that Monta Ellis has done in Dallas. Smith’s 2013 free agency represented the biggest chance yet; would he end up in a good place and maximize his talents? The answer, unfortunately, was no, and when he landed on an uneven Detroit team that already featured two huge paint presences, a lot of us braced for the worst.

Then the worst happened.

The fear was that sharing the floor with Monroe and Drummond would cause Smith to emphasize his wonky jumper more, not less. That’s exactly what happened; the share of his shots that came within the restricted area dipped to a career-low mark, while the share that came outside of 16 feet hit a career high. Consider this couplet of terrible stats from his first campaign in Detroit:

• Out of 35 players who tried at least 400 midrange shots last year, Smith was the only one who converted fewer than 35 percent of those shots. He converted just 32 percent.

Unsurprisingly, he doesn’t like stats. He told USA Today last season, “I’m a basketball player. People try to throw statistics in there. I’m not one to look at where I am on the court (when I shoot).” Well, that explains some things. Regardless, Smith’s field goal percentage last year was also a career low. He made just 42 percent of his shots and coughed up this gem of a shot chart: 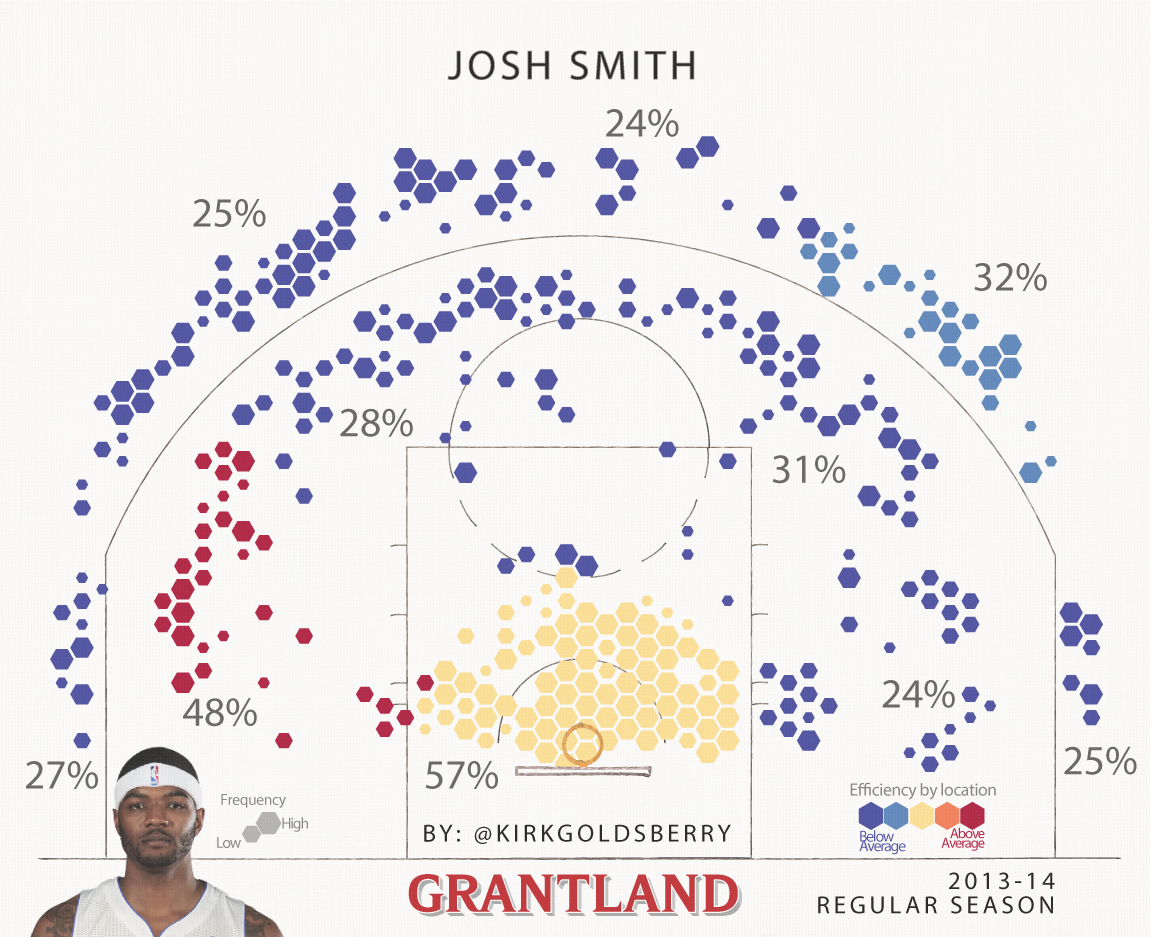 It looked bleak in Detroit. Then the Pistons fired the coaching staff and brought in potential savior Stan Van Gundy. Could he be just the right person to fix Smith? Could he finally align Smith’s shot selection with his talents? It was promising, especially when we saw quotes like these:

“I think Josh has a very good understanding of the shots he needs to shoot that are not only best for him, but best for our team,” Van Gundy said. “He’s one of the elite guys in the league around the basket.”

Well, he used to be. The most troubling thing about Smith this year has been his precipitous drop-off in close-range efficiency. His last year in Atlanta, he converted 63 percent of his close-range shots. This year, that number is all the way down to 44 percent. Out of 45 players who have attempted at least 150 shots inside of eight feet this season, Smith ranks last in field goal percentage.

Concepcion: Coaching is hard, general managing is hard, and doing both together is really, really, really hard. No one bats 1.000, and even the smartest, most data-driven basketball minds are just taking the least-risky calculated risks. Surely, with hindsight and a time machine, Van Gundy would’ve taken whatever TED talk deal Vivek Ranadive had the Kings offering over the summer — Smith for Carl Landry and Jason Thompson, or Thompson and Derrick Williams — dumped Smith, then done whatever the hell he wanted with those guys rather than pay basically the equivalent of a midlevel exception for twice the length of Smith’s current deal, plus a year, for the privilege of Smith not being around anymore. Maybe Van Gundy wanted to have a chance to work with Smith first, before making a decision on whether he fit in with the Pistons’ future. And herein lies, potentially, the downside of the NBA Czar model — not enough checks and balances. Of course Van Gundy thought he could change Smith. I guess you can lead a player to the shot chart, but you can’t make him believe it.

Goldsberry: Maybe a leopard can’t change its spots. But then again, as you pointed out, there was 2009-10, when Smith quit 3s and set career highs in efficiency. In addition, since Van Gundy inherited Smith from the previous regime, you can’t blame him for the acquisition. He was handed the keys to a broken-down Cadillac, and at least he tried to tinker with some of the parts before scrapping them altogether.

The crazy thing is, Smith will definitely get another shot (pun intended), and it might be in Houston, where there’s a constitutional amendment against playing basketball like Josh Smith. Is that where this is going? Will Smith prove us all wrong in Houston, or will he just unpack the same old tire fire and burn down that franchise’s dignity too?

Concepcion: The Clippers, the Grizz, really any Western power that might be able to get Smith for a minimum deal could and perhaps should. There’s not much to lose just to see. Still, I’m holding out for the only place that makes sense. 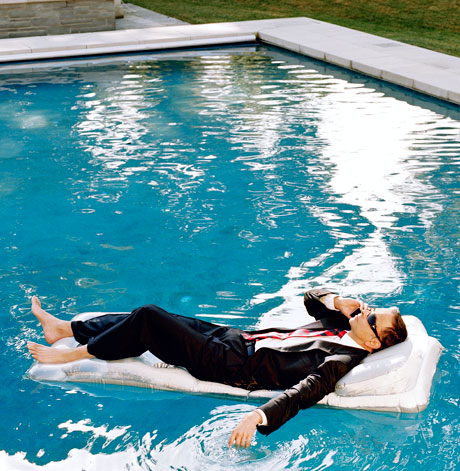 Is that Vivek’s music I hear?