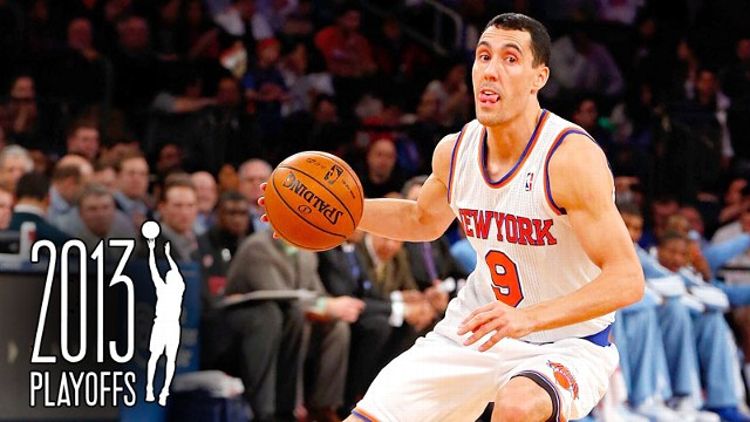 Who Is He? Pablo Prigioni.

What’s His Nickname? “The Maestro” has popped up a few times in my search, but I’m suspicious that’s only a result of the YouTube clip below. New Yorkers can help me out here, but apparently there’s a local sportscaster who refers to him as “Priggy Smalls” — make your own judgments there.

Where Is He From? Argentina, but he played professionally in Spain.

His Game in 25 Words or Fewer: A pass-first point guard who’s fluent in the pick-and-roll, shoots it well enough from 3, and consistently makes great decisions with the ball.

Best Wikipedia Tidbit: “Prigioni began his professional career with Ramallo of the Argentine LNB League during the 1995–96 season.” This is worth noting because with some quick subtraction, we can see that even though this season is Prigioni’s first in the NBA, he’s been playing professional basketball for about as long as Jason Kidd. He’s a 35-year-old rookie.

In trying to piece together how it took Prigioni this long to get to the NBA, it seems important to understand the arc of his career internationally. The Argentine is the latest of NBA bloomers, but his development in Europe also took some time. According to DraftExpress, in 2005, Prigioni was the backup point guard for Spanish club Tau Vitoria, playing behind soon-to-be NBA mainstay Jose Calderon. After Calderon left Spain to join the Raptors for the 2006 season, Prigioni became the team’s starting point guard and flourished. Prigioni led both the Euroleague and ACB league in assists at the time he was named the Spanish King’s Cup MVP in 2006, and he was named second-team all-Euroleague that year and the next. The six years since then are harder to explain. Two theories: (1) Prigioni was considered an average athlete even for the Euroleague, and (2) as one of Europe’s best players, he was making a very healthy living in a country that he’d called home for a decade.

The above video is the best sample around of Prigioni’s work. He’s splitting double teams, making pocket passes, getting guys easy dunks, and hitting open 3s. And oh yeah — it’s set to Mozart.

Best Tweet: Shortly after being signed, Prigioni vowed to start tweeting in English more often. He lied. Almost all Prigioni’s tweets are in Spanish, but a choice retweet from March says a lot about where Argentina rests a lot of its national pride:

Is He Saber-Friendly? Yes, but it might almost be to a fault. Prigioni is a very efficient scorer whose True Shooting percentage is right around 60 (for reference, saber golden boy James Harden’s is exactly 60). This is bolstered by a very analytics-friendly shot selection. Prigioni took 220 shots in the regular season; 191 of them came in either the restricted area or from 3. For a 40 percent shooter from behind the arc, this is an ideal ratio. Prigioni rarely does something he doesn’t want to do with the ball, and both his scoring efficiency and low turnover numbers are evidence of that. But that desire to stay within his comfort zone also means that Prigioni shies away from shots that he should probably take.

On the whole, though, that seems like a sacrifice the Knicks should be willing to make. Even in Europe, Prigioni was a pass-first player whose primary goal was to get good looks for his teammates, and that’s a trend that’s continued in New York. His 27.5 assist percentage (an estimate of the percentage of teammate field goals a player assists on when he’s on the court) is solid, and Prigioni (like most of the Knicks) takes care of the ball. New York is a very good offensive team, and maintains that effectiveness when Prigioni is on the floor. The Knicks’ points-per-100-possessions figure is almost identical with him on or off the court.

Defensively, Prigioni is athletically limited, but he’s also a willing defender. If asked to provide ball pressure on an opposing point guard, Prigioni is game and also not terribly ineffective. The Knicks actually give up about four points fewer per 100 possessions with him out there.

Should We Know Him? Even if he weren’t a 35-year-old rookie logging big minutes in the playoffs, Prigioni is still a starter for a team capable of making the Eastern Conference finals, so yeah, I’d say so. On a team littered with shooting and scorers, Prigioni is a solid fit handling the ball and playing opposite Felton. His shooting and defense allow him to play a role similar to the one Jason Kidd had, and at this point, he’s probably better at getting into the paint and creating for other guys. If the Knicks do get bounced by the Pacers, it’ll be because they can’t match up with what Indiana has inside, not because Pablo Prigioni is their starting point guard. Prigioni’s given New York everything the team could’ve wanted, and probably more.

So, Matt Kemp Is Awesome