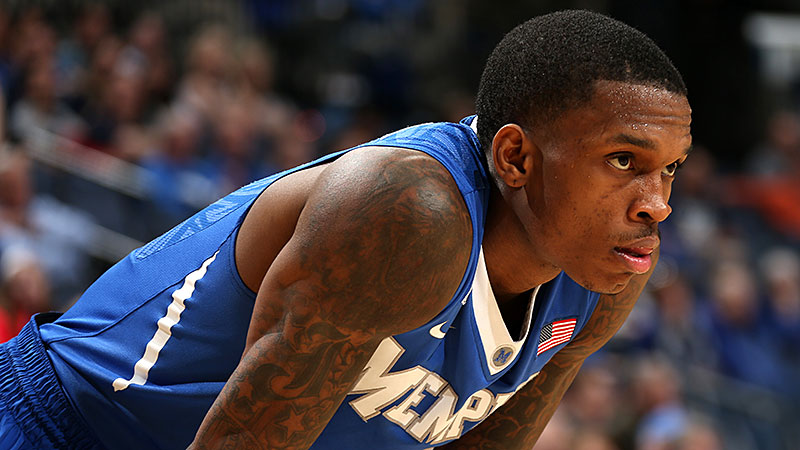 Who Is He? Joe Jackson, 6-foot-1 point guard for Memphis

Where Is He From? Memphis

His Game in 30 Words or Fewer: Goddamnit, why did I already call Kyle Anderson the most entertaining player in college basketball? Slo Mo is fun, but Joe Jackson is like basketball meth.

You Might Know Him From: Memphis games? I have no idea. But a friend emailed earlier this year and said the following: “You need to familiarize yourself with Joe Jackson, wee explosive combo guard from Memphis. Not for NBA purposes — just for his existence. Spirit of the 08-12 Wizards lives in him — he missed a reverse windmill dunk w/ 6 min left up 2 on UCF. So naturally, he tried again 30 seconds later … WATCH THIS MAN.”

Sold. Immediately. There is no higher basketball compliment than a comparison to the 2008-12 Wizards.

A song called “Memphis” by a dude named Joe Jackson who has absolutely no relation to this basketball player.

But seriously. That block!

Great Moments in Social Media History: No official Twitter that we could find, but he does have an official fan account whose website is listed as buckets.com.

Off the Court: Read this profile in the Memphis Flyer and then try rooting against Jackson this weekend. He details his early struggles, the pressure to provide for his family financially and emotionally, and the challenge of playing in the spotlight as a hometown hero for Memphis. The profile also starts like this:

We take the word king seriously in Memphis. This is the city where Elvis Presley rose and Martin Luther King Jr. fell, the former providing an international brand, the latter an eternal wound. Only with more than 30 years of hindsight does Jerry Lawler seem to have earned his chosen moniker in the quasi-sport of professional wrestling. King is royalty in this town, to say the least.

As a sophomore basketball prodigy at White Station High School, Joe Jackson had “King of Memphis” tattooed across his chest. He’s been fighting to meet that standard ever since.

Uhhh … Everything else was impressive, but you had me at “King of Memphis” tattooed across his chest when he was 16 years old.

So Why Should You Know Him? Because beyond the dunks and highlights and chest tattoos, people like Jackson are part of what make March Madness great. He’s playing for his entire family, and his city, and whatever happens here, these will probably end up being the biggest games of his life. He never totally lived up to all the hype he got coming out of high school as a McDonald’s All American, but maybe that’s what these next few weeks are for.

In the meantime, remember: basketball meth. How can you root against any 6-foot-1 dude who will dunk on people, attempt irresponsible windmills, and block the shots of 7-footers?

This whole Memphis team is as explosive and unpredictable as its senior point guard, and that’s absolutely an endorsement. There have been bad losses and bad games along the way, but while the whole world picks Louisville to hit the Final Four, it seems like the Memphis team that beat the Cardinals twice is flying under the radar.

So, embrace Joe Jackson while there’s still room on the bandwagon.

And when it beats UVa in a few days, let’s make sure this becomes America’s theme song.

About Last Weekend: It's Madness!