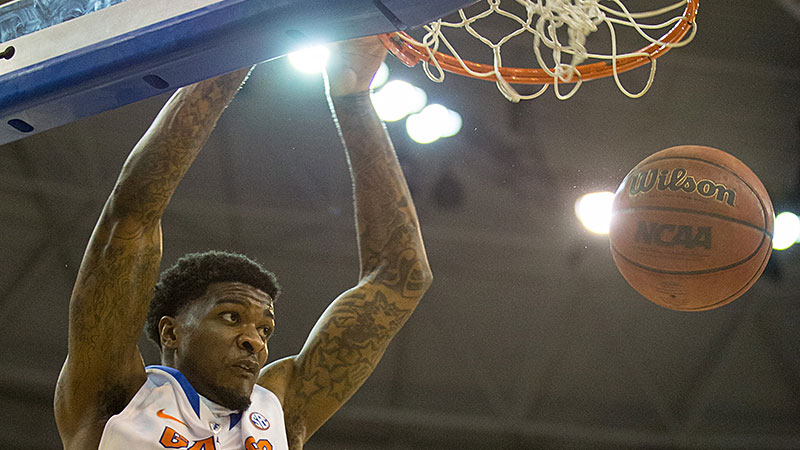 We’re bringing back the Who’s That Guy? series to help get everyone ready for March Madness. So far we’ve looked at Melvin Ejim, Nick Johnson, and Nik Stauskas. Today? Chris Walker!

Who Is He? Chris Walker, 6-foot-10 forward for Florida

Where Is He From? Bonifay, Florida

His Game in 30 Words or Fewer: You know the part in Contact where Jodie Foster seemingly never leaves Earth, but her recorder records 18 hours of static? That’s Walker, but with 18 hours of dunk videos.

You Might Know Him From: Walker spent the first semester off the court because of academic issues, and then sat during the second semester as the NCAA reviewed his eligibility. After the NCAA found basically nothing and wasted everyone’s time, Walker was ordered to pay $270 to charity and became eligible earlier this year. This top-15 player in 2013’s loaded recruiting class stepped on the court as a Gator for the first time on February 4. He hasn’t played big minutes in Billy Donovan’s deep rotation, but I wouldn’t put a Tyrus Thomas–esque tourney run past him, if we are dreaming the golden dreams of March.

Film Study: His first bucket as a Gator, naturally …

Great Moments in Social Media History: He’s a pretty mellow, God-thanking dude on Twitter and the ’Gram, but certain gems emerge once you sift. Also, Walker is inked up as anyone as college basketball. With good reason, most people usually notice the neck first:

OH! And he once outsourced his recruitment to LeBron, who told him to “follow his heart.”

Off the Court: Walker is close to fellow Gator freshman and NBA prospect Kasey Hill — they played on the same AAU team, the Florida Rams, that also featured Kansas freshman Brannen Greene. Walker once guaranteed that if he and Hill both went to Florida, they would win the national title. They enjoy NBA 2K14.

So Why Should You Know Him? Though Walker’s NCAA clearance produced a lot of drama, it didn’t spook the stacked Gators, who never needed big minutes from Walker (or Hill, for that matter) to dominate the SEC. Florida — thanks to the strong, tough, determined backcourt of Scottie Wilbekin and Michael Frazier — instead can develop the raw, gifted Walker at its own pace. So, picture Walker as a potential gamebreaker who Florida doesn’t even need, but could easily provide all the highlights in a “Top Ten” despite playing for less than 10 minutes.