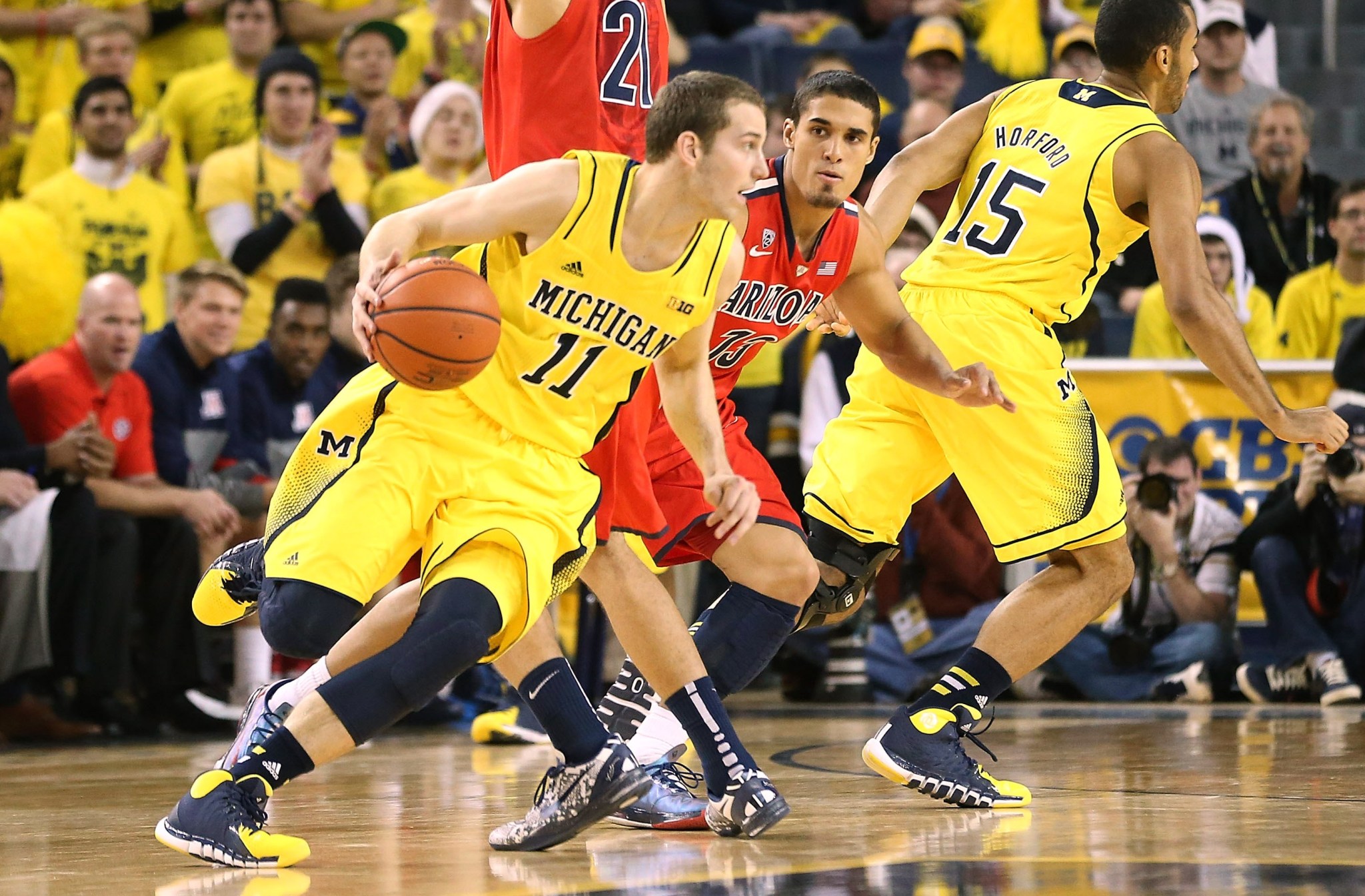 We’re bringing back the Who’s That Guy? series to help get everyone ready for March Madness. Last time we introduced you to Melvin Ejim. This week? Nik Stauskas!

Who Is He? Nik. Motherf—in’. Stauskas.

Where Is He From? North of the Wall, outside Toronto.

You Might Know Him From: Last year’s Final Four run, when Stauskas was a 6-foot-6 freshman guard who played his way into the starting lineup. This year Trey Burke and Tim Hardaway Jr. are in the NBA, and the offense belongs to Stauskas and Glenn Robinson III. To prepare, he spent the summer transforming from Screech to Jason Bourne.

Film Study: This video of him hitting 70 of 76 3-pointers in five minutes made the rounds after the NCAA tournament run last year, and prompted Steph Curry to challenge him to a shooting contest.

(Note: It’s on an outdoor hoop, which makes all that so much more impressive. Ever tried shooting 3s outdoors? It’s horrible.)

If you’ve got 20 minutes, here’s a documentary that includes footage of Stauskas’s first game (in 2001) and focuses on Stauskas’s preparation for the NBA. He compares himself to Klay Thompson at the next level, which isn’t necessarily as crazy as it sounds.

And, last night, he silenced the U-S-A chants.

Off the Court: How does a lanky kid from Canada turn into the likely Big Ten Player of the Year? This introduction from Adam Doster and ESPN The Magazine helps explain:

When Nik Stauskas was in fifth grade, his parents gave him and his older brother Peter a choice: on a small patch of land in the backyard of their Mississauga, Ontario, home they could install a swimming pool, a putting green or a basketball court. “I loved basketball, but not as much as Nik did,” says Peter. “He really wanted a court.”

Satisfied with the decision, their parents, Paul and Ruta, contacted a new company that specialized in modular sports flooring, a tile-based surface that reduces stress on the legs and, crucially, doesn’t crack or get slick after it rains and snows. It took a while to set everything up; the tiles didn’t lock properly right away, Peter remembers, and the backboard would occasionally tip to one side. But once the parts were in place, the Stauskas boys had access to something rare in their cold, hockey-obsessed country — a personal court where they could shoot hoops. Nik Stauskas spent his entire childhood doing just that.

“I played a ridiculous amount,” he says. “When I came home from school — it wouldn’t matter if it was winter or summer — I would be out there three or four hours a day.” The brothers would play 21 and H-O-R-S-E with their dad, or take each other one-on-one. Tempers occasionally flared. After dropping an intense game to his smaller opponent, Peter once chased his brother around the house with a shovel. Inevitably, Peter would head inside and Nik would plunk a space heater next to the three-point line to warm up his hands when the temperature dropped. Shoot, rebound, heat. Repeat.

If they ever make that sequel to He Got Game, they gotta add Nik Stauskas and his space heater to the opening credits — with his brother in the background, chasing him with a shovel.

While we’re talking Cananda … Stauskas played Vince Carter one-on-one when he was a kid, and he’s known Steve Nash since he was 15 or 16. (“He’s a little white guy, not athletic, can’t jump and he gets the job done against pretty much every point guard in the NBA. It just shows that athleticism isn’t everything and if you have the right skills and IQ for the game then anything is possible.”) He’s also fan of Justin Bieber, in case Biebs is reading. (“J-Biebs, I’m out here. Give me a shout-out or something.”)

So Why Should You Know Him? First and foremost, because it’s great rooting for goofy-looking Canadians to do badass things on a basketball court. I loved him last year, but now that he’s turned into a star, it’s even better. Nik Motherf—in’ Stauskas is fun for everyone.

I have no idea if Stauskas can be as good as Klay Thompson in the NBA, but for now, the Klay comparison works well. Imagine if there were no Steph Curry in Golden State and it were on Klay to lead the offense. Substitute Trey Burke for Curry, and that’s sorta where Michigan is right now. They have an improved Caris LeVert, Glenn Robinson III … but it all starts with Stauskas, the Lithuanian Canadian wild card at the center of the offense.

He’s gotten a lot better at creating his own shots this year, but his actual scoring’s been up and down. He’s a specialist playing the role of superstar right now. When it works for Stauskas — like against Michigan State a few weeks ago, when Stauskas had 21 points in the second half — Michigan can play with anybody in the country. When it doesn’t, like a few nights later against Purdue (5-for-18, 0-for-4 from 3), Michigan looks a lot more ordinary. (At least until Glenn Robinson III does this.)

As good as he’s been this year, it still feels like Michigan’s only as great as Stauskas can be on any given night. It would stress me out as a Michigan fan. But as a college basketball fan?

A team that lost its biggest star is quietly lurking on the outside of the top 10, it’s 16-3 since January 1, and last night it won the Big Ten. Whatever the Wolverines are doing is working. I don’t know if I’m ready to bet on Nik Stauskas and Michigan against the best teams in college basketball, but I’d be scared betting against them, too.