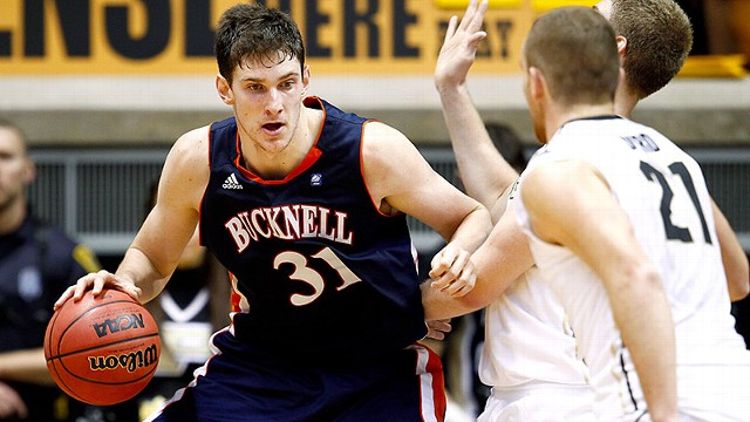 Every year there are a handful of awesome prospects who slip past the lottery in the NBA draft. These are the players you want your team to steal late in the first round, or somewhere in the second. We know they’re out there, only nobody’s sure exactly who falls into this category. But that’s why we’re here. All week, we’re stealing Robert Mays’s “Who’s That Guy?” series to look at a handful of late-round possibilities, with the disclaimer that we know pretty much nothing about these guys. Nobody does, if we’re all being honest. Let’s do it!

Today, we look at the mid-majors.

Who Is He? Mike Muscala! Center from Bucknell.

Where Is He From? Roseville, Minnesota

His Game in 40 Words or Fewer: I’m not a Mike Muscala expert, I’ll be honest, but he sounds like a player who scores in the post or facing the rim, rebounds well, and someone who turn into a nice pick-and-pop threat in a few years.

Scouting Report Tidbit: “Muscala might be the most underrated player in the draft. While his upside isn’t huge … many teams believe he has the potential to be a solid stretch 4 in the NBA.” (Via ESPN Insider.)

Projected Range: Somewhere in the 20s or 30s.

Where Will He End Up? Probably some team like the Rockets or Spurs. They always steal guys like this.

Why Your Team Should Draft Him: Did you read that tidbit? The most underrated! Who cares if he had a disastrous game in the NCAA tournament? I’ve never seen Muscala play a single game, but damn it, I’m ready to start petitioning the Wizards to trade into the 20s to steal him. That’s why it’s fun to be a fan during the draft. And really, he’s a low-risk big man who should be able to add weight and will turn into a solid rotation guy at worst. Would you rather spend a lottery pick on Cody Zeller, or bet on Mike Muscala 20 picks later?

Who Is He? Tony Snell! Swingman from New Mexico.

Where Is He From? Riverside, California.

His Game in 40 Words or Fewer: Sounds like he’s a good shooter, phenomenal athlete who’s impressed everyone at workouts, and a guy who didn’t always show up in college.

Scouting Report Tidbit: “He still has a long way to go as far as proving to scouts he can play with consistent effort, but the raw athletic ability and elite size for his position, combined with smooth shooting touch really improved his stock.” (Via ESPN Insider.)

Why Your Team Should Draft Him: Admittedly, Snell is a wild card. There are 10 Tony Snells in the draft every year, all sent here to drive GMs insane. But if your team needs athleticism on the wing, why not roll the dice here? He doesn’t have to be a star, but in a league where 2-guards are an endangered species, if you can plug Snell in as a starter three years from now, that becomes a major victory. For a stable team in the mid-20s, he’s absolutely worth a gamble. I think.

Who Is He? Isaiah Canaan! Point guard from Murray State.

Where Is He From? Biloxi, Mississippi.

His Game in 40 Words or Fewer: Worst-case scenario, it sounds like he has all the makings of a lighting-quick scoring guard off the bench who terrorizes teams for 20 minutes, then shoots himself back to the bench. We all love guys like that.

Scouting Report Tidbit: “In workouts, he has stood out and even outplayed players ranked ahead of him. He could be this year’s sleeper. His draft night range is 15 to 30.” (Via ESPN Insider.)

Why Your Team Should Draft Him: Because it sounds like he could be a solid point guard option for any number of terrible teams in the NBA. But put him on a good team, behind good players, with a coach that can help him harness the talent? He could turn into an excellent seventh or eighth man, and possibly a fun irrational confidence guy who terrorizes people in the playoffs. If backup point guard is a need for a team in the 20s, then hey, why not?

Who Is He? Tony Mitchell! Forward from North Texas

Where Is He From? Dallas.

His Game in 40 Words or Fewer: Freak-of-nature athlete, and a tweener forward who’s had off-court issues. I’ve been ranting about Tony Mitchell for weeks now, and even I don’t totally know why. God knows I’ve never seen him play an actual game.

Tony Mitchell just jumped so high they had to put something under the bar to raise it. pic.twitter.com/Pvfg1BUAii

Say this about Tony Mitchell: Very upfront about his lapses in effort at North Texas. Says every team asks about it. Says he made mistakes

Important Note: He is not the Tony Mitchell from the D-League, and Alabama before that. The other Tony Mitchell must be pretty pissed off at this newer, slightly more successful Tony Mitchell.

Why Your Team Should Draft Him: Because anything after pick 15 is a crapshoot regardless. You can try to grab great rotation guys (Muscala), explosive bench players (Canaan), or potentially solid starters (Snell). But every now and then there’s a late-round guy who has a chance to be a star, only for a variety of reasons (age, off-court issues, bad competition, injury scares, etc.) he’s slipping into the middle of the first round. Sometimes these players turn into Qyntel Woods, or sometime they turn into Zach Randolph. It’s impossible to tell how it will play out. But if you’re stuck in the middle of the first round, why not swing for the fences? I don’t know whether Mitchell will actually turn into a star as a supernaturally athletic combo forward, but it definitely sounds like he’s got more potential than 15 guys who will get drafted ahead of him, and that’s always fun. ROLL THE DICE, ATLANTA/BOSTON/CLEVELAND/CHICAGO.