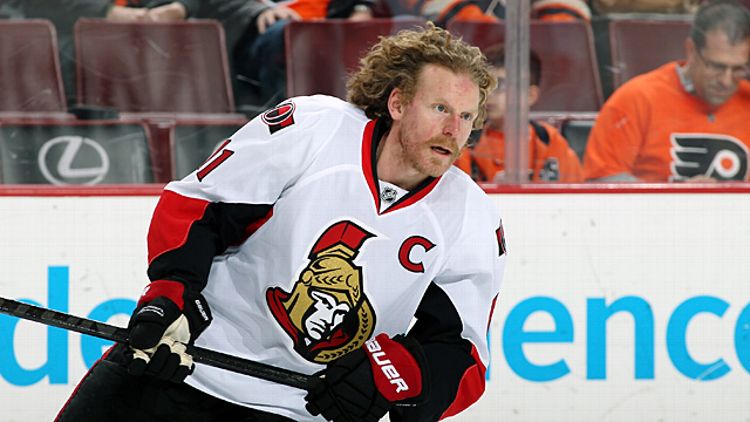 As the offseason stretches into the summer, news from the transaction wire has gradually slowed to a trickle. That’s in stark contrast to the flood of moves we saw over the first few weeks.

Some of those moves made headlines, like the Lightning’s buyout of Vincent Lecavalier and Daniel Alfredsson’s decision to sign with Detroit. Some smaller deals received less attention, like the trades that sent Mark Streit to the Flyers or Shawn Horcoff to Dallas.

If you’re thinking to yourself Um, that was kind of an odd group of moves to bunch together into a lede; I bet there’s some sort of connection he’s about to reveal, then you’re right, because each of those four transactions involved a team parting ways with its captain. And in what’s become an odd subplot to the 2013 offseason, that seems to be a trend around the league.

There are now eight NHL teams that find themselves without a captain, an all-time NHL record according to the Department of Facts I Didn’t Bother to Research But Sound Plausible Enough. That means we’ll see as many as eight new captains named before the start of the season. But who?

Here’s a look at the eight current captainless teams, and our best guess as to which player in each city will end up being handed the “C.”

The ex: Brenden Morrow, traded to the Penguins at the 2013 deadline.

The candidates: New Dallas GM Jim Nill came over from Detroit, so he may want to follow the Steve Yzerman model and give the “C” to a young franchise player. So, congratulations Tyler Seguin!

Just kidding. Jamie Benn would get the nod in that scenario. He’s probably the team’s best player, he’s signed long-term, and he was an alternate captain last year. He’s young (he turns 24 next week), but he’s already entering his fifth NHL season.

A second option would be Ray Whitney, who’s 41 years old and has seen it all during a career in which he’s played for eight NHL teams. There’s also a pair of well-respected veterans in Horcoff and Sergei Gonchar, but both are unlikely since they haven’t played a game for the team yet.

The ex: Lecavalier, who was bought out two weeks ago and signed with the Flyers.

The candidates: This one comes down to a battle of youth vs. experience, which is a nice way of saying it’s between a young player and a very old one. With Lecavalier gone, the Lightning are down to two established stars on the roster, and both could make a strong case.

Let’s start with Steven Stamkos. He’s a dominant player who’s just entering his prime and has been groomed as the face of the franchise since before he’d even been drafted. At 23, he’d be relatively young to be a captain, but that probably wouldn’t worry the Lightning brain trust. Yzerman, the Lightning general manager, was only 21 when the Red Wings named him captain and that seemed to work out OK.

The other option is Martin St. Louis, the 38-year-old veteran who just won the Art Ross. St. Louis is well-respected, has a reputation for an almost ridiculous work ethic, and is tough as nails, despite being one of the league’s smallest players.

Best bet: It seems inevitable that Stamkos will wear the “C” in Tampa Bay. So why not let St. Louis do the honors for the last few years of his career, then have him pass the torch to Stamkos?

The ex: Rick Nash. Yes, the guy who was traded to the Rangers a year ago. The Blue Jackets chose to play the 2013 season without a captain.

The candidates: This one’s kind of tricky. There’s no shortage of candidates, but also no obvious pick. The team has two big-name stars up front in Marian Gaborik and Nathan Horton, but both are relative newcomers. Jack Johnson and R.J. Umberger wore an “A” last year, so they’re candidates. Brandon Dubinsky seems to fit the traditional captain’s mold, and defenseman James Wisniewski is a crusty veteran.

The best player on the team is reigning Vezina winner Sergei Bobrovsky. While goalies can’t wear a “C,” teams can technically name them captain. But let’s just say it hasn’t worked out well in the past.

Best bet: It’s a tough call, but it’s probably going to be Johnson. Not everyone is a fan of his play, but the Blue Jackets coaches and front office seem to love the guy.

The ex: Horcoff, who was traded to the Stars.

The candidates: Your first thought would probably be Ryan Smyth, a veteran Oiler who earned the nickname “Captain Canada” after wearing the “C” in international competition six times but has never held the honor in Edmonton. The downside is that Smyth is 37 years old and has just one year left on his current contract, so he’d be a temporary solution at best.

The other option would be to go with one of the team’s talented young players. Taylor Hall has already emerged as one of the best players in the league and would be an obvious choice. He’s only 21 years old, but current NHL captains Sidney Crosby, Jonathan Toews, and Gabriel Landeskog were all younger when they were given the role.

Jordan Eberle could be another decent option, and he already earned a full-time alternate captain role this season. (Hall served as an alternate part-time.)

Best bet: The Oilers are trying to finally make the transition from perpetual rebuild into genuine contender, so it seems like as good a time as any to hand the “C” to Hall. It would also be a nice change of pace for Oiler fans, since with the exception of two seasons of Doug Weight from 1999-01, the team hasn’t had an offensive star as captain since Mark Messier in 1991.

The ex: Streit, whose rights were traded to the Flyers a few weeks ago once it became clear he was going to leave as a free agent.

The candidates: Kyle Okposo wore an “A” this year, Lubomir Visnovsky is a respected veteran, and the newly acquired Cal Clutterbuck is a solid grinder, but yeah, it’s going to be John Tavares.

Best bet: Tavares is such an obvious choice that even the Islanders couldn’t screw this up. (Hmmm …)

The ex: Jason Pominville, who was traded to the Wild at the 2013 trade deadline.

The candidates: This one’s a little more complicated, since the Sabres are a team in transition that doesn’t seem like it knows what it wants to be when it grows up quite yet. For example, the team’s best player is Thomas Vanek, who was an alternate last year. But he’s indicated that he may want out, so there’d be some fences to mend before he could be the long-term choice.

It seems like the most obvious choice would be last year’s other alternate, Drew Stafford, but he’s also rumored to be possible trade bait. Tyler Myers looked like a franchise player a few years ago, but he’s on shaky ground too. They could also turn to a veteran like Christian Ehrhoff, Steve Ott, or even (if they wanted to troll everyone) Patrick Kaleta.

Best bet: Let’s go with Stafford if he’s still on the team. If he’s gone, Ott’s probably next in line.

The ex: Alfredsson, who super-kicked the franchise through a plate-glass window last week.

The candidates: There are several strong candidates. Chris Phillips would be an obvious choice, given that he’s spent his entire 15-year career with the Senators and has worn an “A” for the last several seasons.

Then there’s Jason Spezza, the multi-time All-Star who’s entering his 11th season in Ottawa. He also just turned 30, which I mention only because learning that made me feel really old and I figured I should spread the misery around a bit.

Chris Neil is a fan favorite who’ll get some local support. And they could also fully embrace the whole “changing of the guard” theme by going with their best player, 23-year-old Erik Karlsson.

Best bet: There are no wrong answers here! (Note: Chris Neil would be the wrong answer.) But Spezza seems to be emerging as the consensus choice, and it’s a hard one to argue with.

The ex: Jarome Iginla, who was traded to Pittsburgh at the deadline.

The candidates: Well, you could go with a star player like … [double-checks Flames roster] … OK then, on to Plan B.

Mike Cammalleri, Mark Giordano, and Curtis Glencross wore the “A” last year and would seem to be the top candidates, though Cammalleri has just one year left on his deal. Other veterans include Dennis Wideman and Jiri Hudler. And of course, we’ve known for years that Matt Stajan is future captain material.

Best bet: The Flames just said good-bye to one of the greatest captains in franchise history and have moved into full tear-it-down-and-rebuild mode, so they may just decide not to give anyone the “C” until their situation stabilizes a bit. There’s precedent here: After Mats Sundin left Toronto in 2008, the Leafs went two full seasons without naming a replacement.

Then again, copying the Toronto Maple Leafs isn’t exactly a time-honored strategy for success. If the Flames do decide to name a captain this year, let’s spin the wheel of unremarkable veterans and go with Glencross.

Your Annual Reminder: The Tour de France Is Awesome