Who Is Tomas Berdych and How Did He Beat Roger Federer? 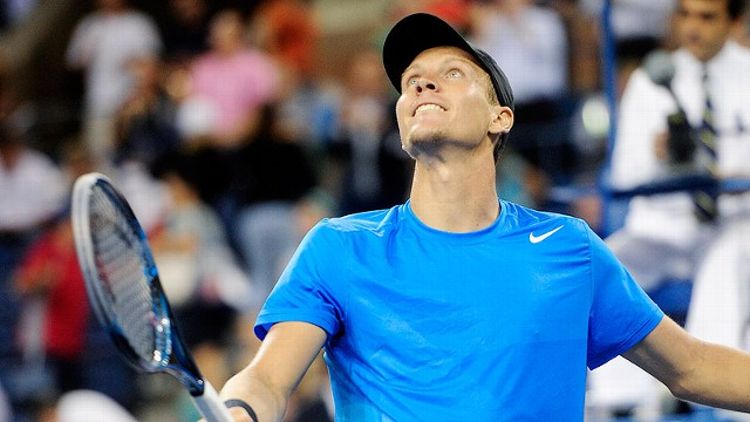 If I said I’d picked Tomas Berdych to beat Roger Federer last night, I’d be lying. But the Andy Murray freak-out against Marin Cilic was actually more surprising, even if Murray handled Cilic easily in the end. Federer was having a terrible night — he can really shank his forehand — and Berdych has tremendous talent. He hits ground strokes with the speed of serves. Last night, a few of his returns embarrassed the great Federer.

I had paid special attention to Berdych during several ATP Tour Masters events this spring. Being an inveterate aesthete, I was taken with how beautifully he struck the ball — so clean, flat, precise. He is tall, 6-foot-5, and lanky, a surprisingly graceful mover. Yeah, he would usually crumple — but not before showing how he could threaten all the top players. And yeah, he was insanely sensitive, even refusing to shake a player’s hand after being hit by a shot. But there was something about the fluidity of his game and, when he was playing well (and not screaming at his opponent), the solidity of his calm. I started to think that maybe he would be the one to crack the top three and win a major soon.

Then, at Wimbledon, he lost in the first round. In three sets. At the Olympics, he lost to a guy named Steve Darcis, 4-6, 4-6. Berdych has a reputation as a fragile player. Or, as tennis.com’s Pete Bodo put it, he’s “a mercurial, world-class head case who can trade shots with anyone but is apt to do his greatest damage when it matters least.” So I began to wonder why I’d thought he was so special.

But Berdych came into his match last night with some confidence. Most players not named Nadal or Djokovic can seem overawed by Federer. Berdych has a lifetime losing record against Federer, but he had won two of their last four matches on hard courts. Plus, despite what Bodo said, Berdych had the confidence that he could beat Federer at a slam. He’d done it before, at Wimbledon in 2010.

Just so you know, Berdych has a 5-2 record against his next opponent, Andy Murray.

About Last Night: How 'Bout Them Cowboys?