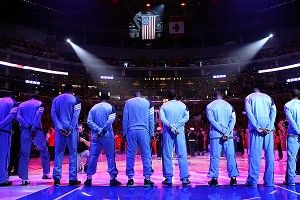 Coming into this past weekend, the first round of these NBA playoffs had been an exercise in defining the league’s classes. The Bulls and their injuries aside, almost every other series seemed set to be over in no more than five games, the higher seed putting away the lower in convincing fashion. There appeared to be two types of teams in this year’s playoffs — those that were equipped to win a playoff series, and those that were not. That’s about when the Nuggets and Grizzlies decided they didn’t much appreciate the side of that line they’d fallen on.

In coming back from their respective 3-1 series deficits, and in each of their Game 7s, there were moments where both Memphis and Denver seemed poised to advance. Even with their terrible performance from the field Sunday, the Grizzlies were up one going into the fourth quarter, and Denver had more than its share of chances late after erasing the double-digit hole it’d dug in Los Angeles. The problem is how to manage a team whose ceiling seems to be a series win in the first round of the playoffs. For both the Grizzlies and Nuggets, it easily could have been a year where both were one round from the conference finals. The question is how each chooses to go from here.

Last season, the Grizzlies felt like the young upstart set to make a leap. Those plans were sidetracked on New Year’s Day when Zach Randolph went down clutching his knee in Chicago and missed the next 34 games.

Memphis still managed the no. 4 seed in the West and the best winning percentage in franchise history with its 41-25 finish, including wins in its final six games. And until Swaggy P started lighting up the FedEx Forum in Game 1, it felt like this year’s first round would be a repeat of 2011. Memphis blew a 24-point lead after three quarters and followed that loss with two more in the next three games. Lionel Hollins and his team should get credit for forcing a Game 7, but with Sunday’s loss, there are some decisions that have to be made.

A year ago, Marc Gasol was a surprising story with a small price tag. Now, he’s set to make almost $14 million in 2013. Randolph rode his strong second half of 2011 to a $71 million extension that would have him making $17.8 million in the final year before his player option. (At $16.5 million, it’s safe to say he’s picking that up.) That number is only exceeded by the $19.3 million owed to Rudy Gay in the final year of his deal that was inked in 2010. Two years from now, the trio would make a combined $50 million. That’s a good chunk of money for a core that got outplayed by Kenyon Martin and Reggie Evans two days ago.

Randolph might deserve the benefit of the doubt coming off the serious knee injury, but the excuses for Gay have all but disappeared. Memphis’s highest-paid player took two shots in the fourth quarter of Game 7, the second of which was a 30-footer with the Grizzlies down 11 inside 20 seconds to go. Gay is and will be paid like a superstar, and at this point, it still doesn’t feel like he’s done much to warrant it.

The decision will be if and how Memphis decides to shake up its roster. The Grizzlies have pleasant surprise Tony Allen locked up through next year, but since Memphis has been trying to deal O.J. Mayo every season for the past 12 or so, it would appear that he might be gone as a restricted free agent. Mike Conley is signed until about 2030. It’s clear that they have to do something, which might include looking to deal one of those three big price tags. Because right now, standing pat just doesn’t seem to be an option.

There was a point in the second quarter of Game 7 against the Lakers when it became very clear why Denver was still in this series. It was about that time in the first half when starters begin taking a seat; both team’s bench players populated the court. For L.A., that meant Steve Blake and Jordan Hill. For Denver, it meant Andre Miller and Al Harrington.

Since it’s not 2001, Miller and Harrington probably aren’t going to be the main pieces of a contender, but there’s something to be said for a roster stuffed with those types of NBA bodies. That depth was missing even another 6-foot-8 frame this postseason after the season-ending injury to Wilson Chandler in mid-April.

Miller represents one of the club’s most pressing offseason decisions. An unrestricted free agent, Miller told the Denver Post, “At this point in my career, if I’m going to be a backup, I’m going to be a backup on a championship-caliber team. Obviously, this team is a good team that’s going to get to the playoffs, but the thing is if they are committed to getting to that next level to compete for that championship.”

Like with Memphis, that’s the question the Nuggets have to address. George Karl has made a living by taking solid rosters deeper into the postseason than they probably deserve to go, but what types of moves does Denver have make to become one of the league’s elite? The team is full of young, attractive contracts that would figure to be major trade pieces. It’s whether a star worthy of that type of move proves to be available, and at the right price.

But even without any sort of major move, the Nuggets should be just as frightening next season as they were for the Lakers in Round 1. Any offer for restricted free agent JaVale McGee is likely to be matched by Denver, and pairing him with Kenneth Faried inside gives Denver a young frontcourt able to dominate the glass. Ty Lawson will still be around next season for just $2.5 million before becoming a restricted free agent in 2014, and Chandler, Arron Afflalo, and Danilo Gallinari are all locked up for the long term. That’s why, of the two teams to push their first-round series to the brink, it’s the Nuggets who seem to be the real threat moving forward.