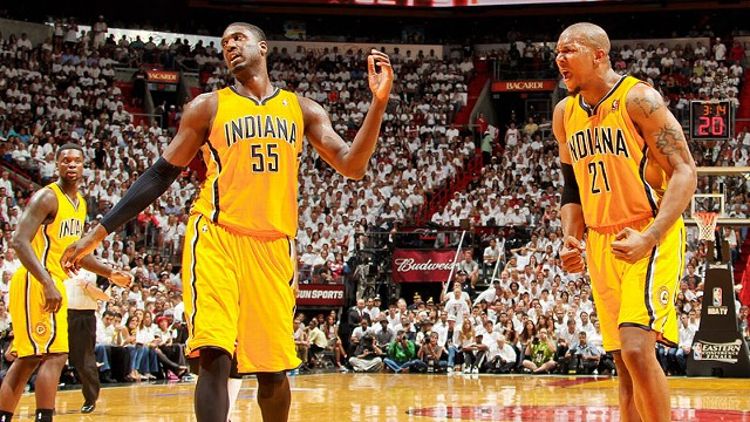 The Pacers are surely crushed by the way their season ended Monday night — in a flood of unwatchable first-half turnovers, and with an unsettling feeling that Game 7 represented the way the league’s hierarchy is supposed to look when the world’s best player gets help from his supporting stars.

But at least the blowout loss reinforces what the front office already knew about this team’s shaky offense and forces the team to ask, again, the deepest philosophical question it faces: Can this core eventually beat a healthy, dialed-in Miami team four times in seven games?

The signs are encouraging. The Heat have been together for three seasons now, and though they’ve strung together a rather dominant run — 10-1 in playoff series — they’ve been on the precipice in each of those three seasons. Dwyane Wade always seems to be dealing with a nagging injury in June, and this aging, taxed-out team doesn’t have the roster depth to deal with that sort of thing in a seamless way. The Pacers played the Heat to the edge of elimination, and, even after a catastrophic Game 7, it doesn’t feel like a fluke. Every regular season, the Heat look as if they’re going to cruise through the playoffs. And every postseason, they somehow find themselves amid some crisis-level melodrama. They can be had.

The Pacers aren’t really in a position to retool their team in any dramatic way, absent a blockbuster trade. They’ve got about $51.5 million in salary committed for next season, factoring in the no. 23 pick, and as ESPN.com’s Marc Stein reported over the weekend, the projected salary cap for next season is only going to creep up from $58.044 million to $58.5 million. That means Indiana could only carve out about $6 million in cap space once you include small charges for empty roster spots. There isn’t all that much you can do with $6 million in cap space.

That cap space is mostly an illusion, anyway. David West, locker-room leader and all-around badass, is a free agent, and Frank Vogel has told me very directly the Pacers plan to bring him back. Unless the Pacers renounce his rights, West remains on their books via an artificial charge called a “cap hold” linked to his prior salary, and West made it clear after Game 7 that he intends to re-sign with Indiana. West’s cap hold counts for $13 million, meaning that charge alone rockets the Pacers over the salary cap and vaporizes their (fake) cap space. Since every outgoing free agent, including Tyler Hansbrough and D.J. Augustin (adios) carries such a charge, the most prudent course for the Pacers is probably to keep at least West’s cap hold on the books, stay over the salary cap, and use the full midlevel exception to lure a free agent who might solidify this horrific bench.

The only way to change that picture and gain significant cap space would be trading Danny Granger in return for little/no 2013-14 salary between now and the transaction moratorium that starts on July 1. Good luck.

In other words: Indiana is very likely to tweak around the edges. That’s the most risk-averse route, a meaningful thing for an ownership that cares deeply about remaining competitive and building loyalty among a fan base strangely slow to embrace this team.

The two-man core of Roy Hibbert and Paul George is a fantastic place to start, and the Pacers will surely lock up George to a max-level extension this fall. That extension will likely be pricier and longer than Hibbert’s max deal. The Pacers still haven’t used the “designated player” tag, which allows each team to pick one player and sign him to a five-year extension instead of the normal four-year deal. George would seem to be a no-brainer for that. And because George made the All-NBA Third Team this season, he will be eligible for a special super-max contract under the so-called “Derrick Rose Rule” if he makes an All-NBA team again next season. The specific numbers could matter quite a bit in 2014-15, two seasons from now, because new deals for George, West, Lance Stephenson (a free agent after next season), and anyone the Pacers sign this summer could take them over the 2015 luxury tax. And if West commands a three-year deal, fully guaranteed, this core could keep Indy capped out through 2015-16.

That’s not a bad thing, really. George especially looks to be worth it. He only just turned 23, which we should all remember when we chastise him for struggling while splitting double-teams against the league’s best pick-and-roll defenses. He did turn the ball over too often this season, he shot a bricky 42 percent from the floor, and he got to the line only about three times per 36 minutes. But his shooting normalized after an ice-cold first month in which he suddenly had to work as a no. 1 option, he’s an above-average shooter from 3-point range, and he drew nearly six foul shots per 36 minutes in the playoffs.

He’s a creative passer who, again, just turned 23. He’s never going to be LeBron James or Chris Paul, but he’s going to get better as a pick-and-roll lead dog. He’s a monster rebounder, and already one of the three or four best wing defenders in the league.

You’ve read enough about Hibbert in the playoffs, and it’s all legitimate. His ability to extend out to 40 minutes per game is huge. So is this: Hibbert attempted 36 shots out of the pick-and-roll in 19 playoff games after attempting only 72 such shots the entire regular season, per Synergy Sports. This is a guy who happily admitted in April that he was not really a pick-and-roll player — that he was too slow for the job.

And then, boom. He’s catching on the move, settling his feet, and hitting jump hooks over help defenders. He’s breaking out off-the-dribble spin moves after the catch, for god’s sake. The Pacers knew they needed to vary up their offense against Miami’s frenetic defense, and Hibbert proved up to the challenge in a way we’ve never seen before. That is massively encouraging going forward as Indiana tries to find reliable points.

They mostly did that in the second half of the season after looking positively Wizardian for the first two months or so. Indiana ranked 11th in points per possession after February 1, and a team can win a title combining that kind of offense with one of the league’s two or three best defenses. But they struggled badly against both New York and Atlanta in the playoffs before scoring at a top-10 rate over the first six games against Miami. That’s not consistent enough to win a ring.

It was fashionable last night, as the Pacers threw the ball all over the place or simply dropped it, to suggest they need a new point guard who can penetrate the defense out of the pick-and-roll. George Hill is not that kind of point guard. But all the evidence we have suggests the Pacers’ starting-unit offense is fine as is, with Hill running things as a sort of caretaker, charged with tossing entry passes, finding shooters, and throwing over the top of defenses as his big men slip screens to the basket. The Pacers’ starters averaged 108.6 points per 100 possessions this season in 1,200 minutes together, equivalent to a top-five mark. The same lineup, with Granger in Stephenson’s place, managed about the same last season. Things are fine on this front.

But Hill can’t morph into a drive-and-kick killer for the Indiana second units that badly need captaining. Augustin failed horribly at that job. Darren Collison flailed around in Dallas, but he’d have been eons better than Augustin, and the Pacers flipped him last summer for Ian Mahinmi in a sign-and-trade that still doesn’t make all that much sense. (Note: As I explain at length here, it was likely a budgetary decision linked to the need to off-load Dahntay Jones’s salary, make way for Gerald Green, and avoid even approaching the tax line, but dealing Collison instead of simply signing Mahinmi as a free agent still wasn’t the best route, even through the lens of Indy’s tight budget.)

This is why Granger is so intriguing. He’s an expiring trade chip, but if he’s willing, he can be a dynamite 20-minute-per-game backup for both Stephenson and George. The Pacers will explore trade possibilities for him, but I suspect they’ll find the market cool in terms of first-round picks and other cheap, appealing assets. And even if they keep Granger, they’ll still need to find at least one backup point guard and (potentially) a big man to replace Hansbrough, whom Indiana nearly traded last summer, per multiple league sources. They could also use another backup wing in case of injury/foul trouble.

The Pacers very nearly landed Jarrett Jack in a Hansbrough-centric deal last season, and he’ll be a free agent again this summer. But Jack may have priced himself above the midlevel exception with his solid scoring on the postseason stage. He’s one of many guard/wing types who teams like Indiana (and Memphis, and Oklahoma City) will try to squeeze under the midlevel exception, either via a cooler-than-expected market or a player’s willingness to take a discount. Other such higher-end names they’ll look at, depending on whether they want to use the midlevel on a wing or a point guard: O.J. Mayo (whom they nearly acquired for Josh McRoberts two seasons ago), Devin Harris, Kyle Korver, J.J. Redick, Kevin Martin, Jose Calderon, Martell Webster, and a few others. Some of those players will likely fall out of Indy’s price range, but they’ll kick the tires.

Cheaper options — between the midlevel and the minimum salary — might include Collison (hey, remember him?), Beno Udrih, Dorell Wright, Eric Maynor (restricted), Shaun Livingston, C.J. Watson (under a cheap player option in Brooklyn), and Matt Barnes.

And all of this goes out the window if they lose West, leaving a gaping hole at power forward in a market that doesn’t include a lot of bigs who fall in the sweet spot between high-end guys (Josh Smith, Paul Millsap, Al Jefferson) and the minimum types Indy can sign whenever. Culture is also important here. Vogel and the front office (first Larry Bird and David Morway, now Kevin Pritchard and Donnie Walsh) have built a culture of defense and professionalism, and the Pacers are not going to sign an offense-first chucker with a checkered record (J.R. Smith, Andray Blatche) just to goose their scoring.

Bottom line: This is a very good team with a smart front office that will consider every angle before likely traveling down the “tweak the edges” path. And that’s fine. The direction is very positive here.