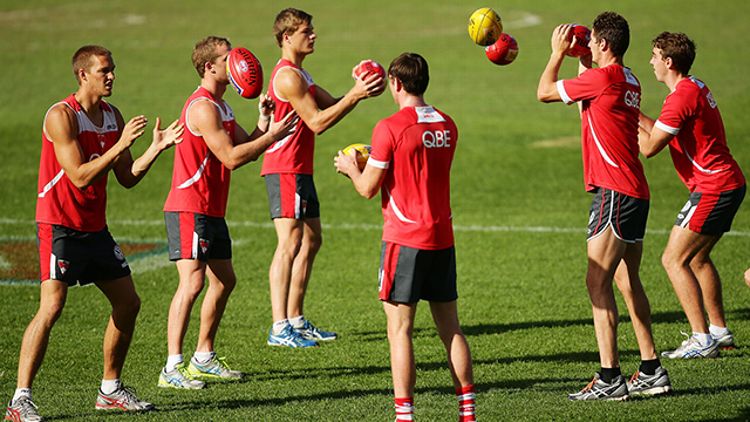 For a country of just more than 20 million people, Australia boasts an impressive sporting legacy. Individuals frequently top international podiums in cycling, swimming, and track and field, while its national teams challenge for titles as well. The nation’s basketball squads are perennial overachievers and the men’s soccer team looks set to reach a third straight World Cup. On the all-time Summer Olympic medal count, Australia sits 10th, sandwiched between China, which is enormous, and East Germany, which was cheating.

The success leads to the impression that all Australians are massive monoliths of muscle and might, physical specimens engineered from before birth to dominate whatever sport they choose to adopt. And that’s not an entirely inaccurate portrait. Walk the streets of Melbourne or hit up Bondi Beach just outside of Sydney, and you’ll find athletic bodies everywhere. Sport is in their blood.

But there’s another, more subtle reason for the Australian success: the country’s focus on sports science. The men and women in the Land Down Under have become world leaders in maximizing performance through the use of trackable, sortable, actionable data. The development is very intentional, a move that has its roots in one of the country’s biggest sporting failures. Over the past 15 years, it has changed the face of athletics in Australia, and it’s starting to have the same effect in the United States.

At the 1976 Olympic Games in Montreal, Australia won just five medals and failed to bring home a gold for the first time since Berlin in 1936. The embarrassment prompted the creation of the Australian Institute of Sport, a government-funded organization dedicated to assisting and advancing the elite Australian athlete. The influx of cash provided scholarships and training for the country’s best and brightest. It worked. In 1984, just three years after the AIS debuted, Australian athletes won four gold medals and 24 overall at the Los Angeles Games.

Today the organization has a staff of 190, including a massive sports science program with more than 50 scientists working on everything from sports nutrition and performance analysis to physiology, recovery, and biomechanics. There are also huge sports science programs at many of the institutions of higher education, a result of the country’s focus on the discipline and a coordinated effort to improve. “There’s been a little shift. The AIS is working with athletes on a day-to-day basis, while the universities are doing research,” says Kevin Netto, a lecturer in physiotherapy at Curtin University in Perth.

Sports science is in the professional ranks as well, with every Australian Football League team having an affiliation with a practitioner, a university, or both. (The sport also has its own PED scandal resulting from one of these men.) “It grew out of trying to get a competitive edge. In Australia, most of the money is relatively even so teams don’t have the facilities, which are a competitive advantage in some ways,” says James Hanisch, the former head of sports science with the Brisbane Lions. “The question became ‘What can we spend the money on and how can we utilize it the most?'”

Hanisch knows a thing or two about excellent facilities. He left the AFL team after Chip Kelly recruited him to help with the football program at the University of Oregon. Kelly left for the Philadelphia Eagles, but Hanisch stayed and now runs the school’s sports science program. He is one of the first wave of Aussies to move to the U.S. to work in the discipline, and he believes more will follow as their services are increasingly in demand.

People and brainpower are not the only Australian sport science assets finding their way to the U.S. Catapult is one of the companies making a major push into America, and it features clients including the Eagles, Dallas Cowboys, New York Giants, Boston Celtics, Houston Rockets, New York Knicks, and Detroit Tigers. Forbes recently highlighted the company’s OptimEye system technology, which includes wearable sensors that report speed, distance, and other information, and costs an average of $100,000 per year. The sensors are currently banned during games — talks to allow this are ongoing — but coaches and scientists can learn from data gathered during practice.

New technology, of course, breeds resistance, and there’s a bit of a Moneyball narrative developing. Some organizations or specific actors within an organization are reluctant to trust that sports science can have any value. “It’s a challenge to change minds from one mind-set to the other,” Hanisch says. “But if they want it, I reckon they will jump pretty quickly.”

Michael Regan, a product development manager for Catapult, had similar experiences when trying to sell Catapult’s services in the U.S. “We found two schools of thought: (1) I’m not interested, or (2) let’s hear what you do and let’s go for it. There wasn’t much middle ground,” he says.

Eventually, however, most teams find that the science and data provided by the products adds value. “It starts with heart rate because everyone understands that to a degree. As it evolves out, [coaches and management] realize that gives them a good picture, but it doesn’t give them the whole picture. They start to look for more ways to maximize athlete performance,” Regan says. “One of those is to be able to measure on-field performance and on-field workload. The obvious reason for that is to assess performance. The less obvious one is that by assessing what the guys do on the field, you get a better idea of their workload and stress levels. You can actually mediate your prescription of practice and game time to make sure you’re getting the most out of a player.”

(Another reason for the slower adoption in the U.S.: The sheer number of exceptional athletes in America. Regan again: “If one guy doesn’t cut it, teams can always find another. Down here in Australia, we don’t have LeBron Jameses popping up. We have skinny white guys, so we have to maximize each of our athletes.”)

In the end, the constant search for minuscule advantages wins. But it does mean that new research and breakthroughs will continue coming from Australia, where sports science is more of a collaborative effort, than from the U.S., where teams will attempt to make any breakthroughs proprietary.

“In Australia, it’s very cliquey. Everyone knows everyone in the industry. You hear about different approaches and research. Teams there don’t have a lot of money, so they can’t rely on doing their own testing and research,” Hanisch says. “Here [at Oregon], we’re trying a whole bunch of stuff. We don’t want to give that to our competitors. We want to keep it close-knit. We even tell players that when they go other places they can’t tell people what we are doing. It stems the flow of research.”

Of course, that only works for so long. “There are players leaving every year. It’s the same with pro sports. You only get one or two years before everyone knows about it and the competitive advantage is done,” Hanisch says.