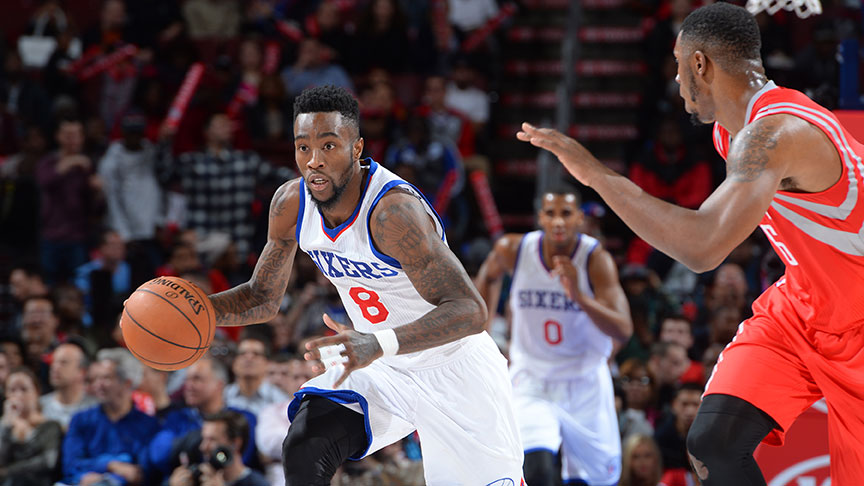 The first time most people heard of Tony Wroten came last summer, when he briefly turned into a viral sensation. During a Seattle Pro-Am game, the Sixers’ third-year guard pulled off an obscene Shammgod crossover that not only fooled the unfortunate sap guarding him, but also sent the help defender scuttling into the Puget Sound whitecaps. The moment was Vined, ’Grammed, and GIFed, and it became the coup de grâce in a wild highlight video of windmill dunks, over-the-shoulder passes, and stuffing the bejesus out of former teammate Spencer Hawes at the rim.

Like watching a lumbering Brian “White Mamba” Scalabrine crush all comers in a one-on-one challenge, it seemed like a reminder that even obscure NBA players are so far down the reed-thin end of the athletic bell curve that they, too, can annihilate mere mortals on a whim.

But through seven games of this young season, Wroten has turned the NBA into a Pacific Northwest charity tournament at a JCC gym. He’s averaging 21.9 points, 6.7 assists, 4.3 rebounds, and 2.7 steals per game. He coughs up the rock more than four times a night, and if his generosity persists, he’ll obliterate the NBA season record for turnovers (Artis Gilmore’s 366 in 1977-78 is the philanthropic mark to beat). And the only player with equivalent minutes and higher usage rates is Kobe Bryant.

Wroten’s box-score overload, as Arnaud Amalric might phrase it, is best described as “Kill all the stats, let the dorks sort ’em out.” But it’s not just that Wroten is putting up these stats as a 21-year-old backup point guard with the Q rating of an extra from Low Winter Sun. No, it’s how he’s doing it.

Wroten is a frenzied bundle of chaos, a 6-foot-6 slasher who incessantly assaults the bucket, barely uses his right hand, and is prone to outlandish streetball-style no-look dishes. His cousin is Nate Robinson, and showmanship might be genetic (or at least it has contaminated the groundwater in Seattle, a city that also produced the incomparable Jamal Crawford). Check out this madness that transpired during Wroten’s 31-point effort against Chicago on Friday:

Here’s a 90-second recap of the Tony Wroten Experience, gleaned from the first quarter of last Wednesday’s nail-biter loss to the Orlando Magic:

Sure, we can dismiss Wroten’s breakout start as a frivolous byproduct of the winless Sixers’ lack of alternative scorers. (Michael Carter-Williams, the team’s regular starting point guard, is scheduled to return from shoulder surgery this week.) But he’s also evidence that unheralded young talent can thrive in a laissez-faire environment where growing pains are accepted — a benefit of Philadelphia’s rebuild often drowned out by the noisy clatter about the team’s alleged tanking.

As Wroten learned as a rookie in Memphis, contenders rarely offer such freedom to fail. Drafted with the 25th pick in the 2012 draft after one season at the University of Washington, he languished on the bench, playing only 272 minutes in his first season. He averaged 2.6 points in 35 games and also spent some time with the D-League’s Reno Bighorns.

“It’s tough on a veteran team like that when you’re not playing,” Wroten told Grantland. Still, it stung when he was dealt to the Sixers during the following offseason in a salary-cap dump. “When I first I heard I got traded, it was shocking,” Wroten said, citing tight friendships with Grizzlies teammates Zach Randolph and Tony Allen. “I was kinda down.”

He might eventually make the Grizzlies look like fools, but at the time there were few signs that Wroten would burst into the raging dynamo we now see before us. Even last season he appeared unlikely to develop into a legitimate long-range threat. Despite taking more than a quarter of his shot attempts from deep, he clanked jumpers at a dismal 21.3 percent from beyond the arc. Still, Wroten’s athleticism and potential were tantalizing. “He has such a gift at getting to the rim and a pit-bull mentality,” Sixers coach Brett Brown told Grantland. “He’s 6-6, 215 pounds, and can go dunk on people. Imagine the package you could have if you improved his perimeter game. We coach him hard, we talk to him clearly. There’s not many punches held.”

Through seven games, Wroten is shooting 36.4 percent from 3-point range and, as a result, his true shooting percentage has bubbled up from dreary to league-average. Such a leap is probably unsustainable in the way that Wile E. Coyote momentarily pedals air after dashing off a cliff, but Wroten appears far more comfortable hoisting up trifectas than before. He isn’t paying attention to percentages, anyway. “I don’t even know what I’m shooting this year,” he said, crediting an “extreme” amount of practice jumpers in the summer for the positive early returns. “I don’t put numbers on it. Even if I miss, I’m not dwelling on the last one.”

As an organization, the Sixers maintain a revolutionary policy toward shot selection; every single attempt in the practice facility is tracked and monitored. If a player puts suitable effort toward improving his outside shooting, he’s allowed to fling up shots in real, live NBA games. “It’s a partnership,” Brown said. “If you’re putting in the time and the work, you have the privilege of taking open 3s, even if your percentage says that’s not a wise move.”

No doubt influenced by the Sixers’ philosophy, Wroten’s shot chart, stark and beautifully brutalist, looks like it’s straight out of a Daryl Morey daydream. He doesn’t just avoid midrange jumpers; he treats them as if they’re slathered with flesh-devouring jungle contagions. 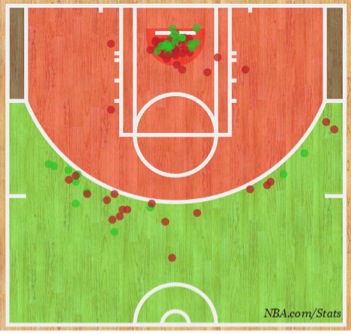 Going into last night’s game, Wroten had attempted three midrange shots this season, while only 2.6 percent of his attempts came from the barren in-between wasteland last year. As a result, he draws zillions of fouls and leads the NBA in points off drives. “I’m just the type to attack,” said Wroten, who didn’t sound overly interested in the advanced-metric magnificence of his field goal splatter. “If the midrange jumper is there, I’ll take it.”

As for Wroten’s avalanche of turnovers, the culprits are snowballing lapses of sloppiness, his mondo-aggressive style of play, and the Sixers’ caffeinated pace. “Sometimes I’m going too fast or trying to make a home run pass,” he said. But while Wroten’s turnover rate has remained largely unchanged since last season, his assists have skyrocketed (from 4.4 to 7.2 per 36 minutes). That’s progress, even if it’s accompanied by misfired alley-oops and occasional collisions with defenders rooted in the paint. To produce moments like this, you have to Shmoney dance on the precipice of mayhem.

“You can delineate good and bad turnovers, in my view,” Brown said. “At times, it’s frustrating. You want to encourage our young guys to play freely and in attack mode, always. I want that environment. I don’t care what our win/loss record is. But as a coach, you understand the value of protecting the basketball.”

With Carter-Williams’s return imminent, Wroten will either resume his backup point guard role or slide to shooting guard, where duties are currently split between the legendary triumvirate of Hollis Thompson, Chris Johnson, and JaKarr Sampson. If the young pair can shoot well enough to keep the floor reasonably spaced — which suddenly seems more possible than it did only two weeks ago — a backcourt of two elongated, springy, interchangeable creators could be basketball’s version of “Ride of the Valkyries.”

No, the Sixers still won’t win many games. But Wroten’s exciting emergence is beginning to look like a more important victory than whatever tallies glow on the scoreboard at the end of the night.