Welcome to Hardwood: A Season on the Brink With Middle School Basketball Players 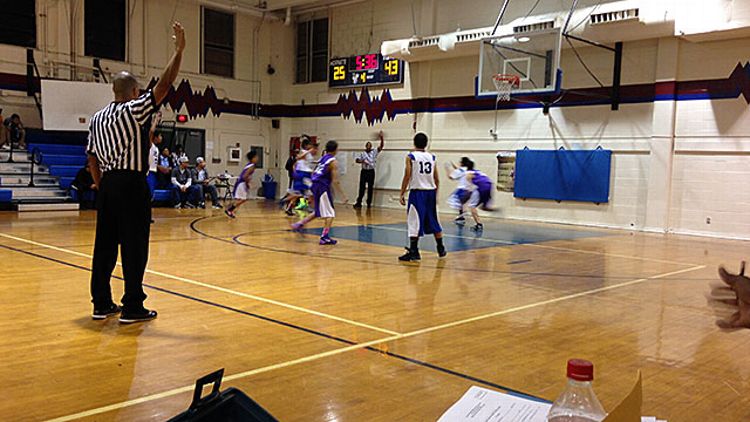 I am the head coach of a seventh-grade basketball team and assistant coach of an eighth-grade basketball team. It isn’t a job I was anticipating doing at the beginning of the school year, but the former coach — one of the gym teachers — unexpectedly left and was not replaced. I’ve been around the basketball program for the duration of my time at the school where I teach (eight years now, if you can even believe that), but this will be the first year that I will be an official coach.

I was asked to take over because I used to coach a basketball team before I became a teacher, so I am qualified, but also because I happened to be walking by when everyone found out they were a coach short.

Many of the kids are holdovers from the school’s football team that I helped coach, so I don’t imagine there will be too much drag. Plus, basketball is pretty much the best sport to play, and I’ve been involved in it, in some form or fashion, for the better part of 20 years.

I’ll write the first game column next week. This one here, this is the origin story/background information column. So now you know. Welcome to Hardwood.

While our school has only ever managed to be average or slightly better than average at basketball, we have had several good players in the past.

There was the year we had Ant, a hyper-likeable kid who spent the summer between seventh and eighth grade growing three full inches in height (from 5-foot-6 to 5-9) and 540 full degrees in intensity (from Harmless 3-Point-Line Watchman to Murderous Basketball Psychopath).

He was the first middle schooler I ever saw fully incorporate Manu Ginobili’s Eurostep into his game. He also remains the only kid I’ve seen replicate Manu’s full-speed mania. Ant played with no concern for the aftereffects of his mayhem, diving after loose balls and crashing into the paint to snatch up rebounds like he hated the entire world.

There was the year we had J., a mostly shy kid possessed with uncommon athleticism. He was the type of player coaches pray for; he looked like he thought he’d die if he stopped moving, he finished every sentence with “sir,” and he could pull an average afternoon game up out of the muck and drag it into the stratosphere with a single play of brilliance. Nobody was very surprised when he returned, nearly four years after he’d left, to let the coaching staff know he’d earned scholarship offers from several universities.

Then there was Junior, a teeny-tiny point guard with a head like a Hyundai Accent. Junior actually wasn’t all that great at basketball, but he was just about the funniest, most charming kid of all. He once gave himself a two-inch-wide burn mark across the center of his forehead while smelling pancakes his mom had made for breakfast, which is maybe the best thing that I’ve ever had explained to me in my whole life.

But as far as our school is concerned, there is only one true basketball story worth telling. Several years ago, we were starting out the season on a disrespectfully cold night against a school not particularly known for producing intimidating squads. It was supposed to be a dull game, our decidedly average team against their decidedly average team. But we had one player, The Movie, who inspired the kind of hope reserved for Christmas films.

The Movie was a breathtaking human. By 13 years of age, he had somehow convinced his body to stretch itself to 6-foot-1. He looked like a smaller David Robinson and moved like a wider Allen Iverson. It was remarkable. When we’d scrimmage, one of the coaches always had to guard him because he was just too overwhelming for his shorter, rounder teammates. (I’m using the term “guard” here loosely. The coaches couldn’t stop him either.) The team averaged 40 points per game that season and The Movie accounted for 37 of them. On our campus, he was basically a superhero, bigger and stronger than all of the kids and bigger and stronger than all but two or three of the teachers too.

Before one game, our head coach issued a proposition to The Movie: “If you dunk it in any game this season, I’ll buy you whatever pair of shoes you want.” No kid at our school had ever dunked it before — only a handful had ever even touched the rim.

The Movie had never even gotten close to dunking in practice.

Still, he was unfazed. “All right, coach,” is all he said back.

One play. It took exactly one play for The Movie to dunk it. He won the jump ball at tipoff, sprinted forward, yelled for a pass, captured the ball as it flew through the air, took two hard bounces, and then became a legend.

He planted his left foot down into the hardwood, fracturing the court and fracturing the earth underneath it, too, then exploded up into the sky, throwing a lightning bolt down through the rim. The gym went completely silent. Like, dudes, SILENT. Literally NOBODY knew what to say or do. The crowd, both coaching staffs, the referee — silence. The other team wilted instantly. You could see it on their helpless faces. They didn’t want to win the game anymore; they just wanted to make it off the court without being sacrificed to their new Zeus.

Our school has never won a basketball championship and I don’t think we’ve ever even won more than six of any season’s 10 games, but we had The Movie for two beautiful years, and that’s an even trade.

Second Place: We have a player this year named 3-D. He is, were I to guess, the most enjoyable kid that’s ever been. He plays shooting guard for the seventh-grade team. He’s approximately 20 inches tall and weighs about as much as a pair of Timberland boots. But that’s not important. 3-D is an improbable scoring machine. It takes all his energy to get the ball past his tiny shoulders and up high enough to reach the basket, but he gets it up there, and he gets it up there a bunch.

We played a practice game against a considerably better team the week before the season officially started. Through the first half, we were throttled. And 3-D was livid about it. He didn’t say two words during halftime, which everyone noticed because, prior to that moment, 3-D had never stopped talking for more than 15 seconds in all his life.

When the third quarter started, he detonated. He hit a jumper, followed that with a 3, followed that with a fast-break and-1, then followed that with another jumper. It all happened in about 90 seconds. The crowd (it was an away game) was through the ceiling, shouting his number and “Ooooh-ing” each of his moves. After the game, (which we still lost), several of the older boys from the opposing school came over to the bench to high-five him. It was a very neat moment. 3-D has alligator blood in his undersize veins. He’s our team’s Nate Robinson.

First Place: I always end practice with that game where you have everyone shoot a free throw and they have to run a lap for each one missed. It’s always funny to watch how they act when everyone is counting on them to come through. There are players that fold, there are players that flourish, and then there’s The Sauce. The Sauce is a shooting guard on the eighth-grade team. He is a continent’s worth of confidence. At a recent practice, he strutted up to the line and prepared to shoot. He always makes sure he’s the last one to shoot because that’s just the type of kid he is (The Best Type, if you’re looking for a label). I told him, “Hey, OK, look: If you make it, I’ll erase all seven of the laps you guys have to run.” The other players went yo-yo, shouting at him and begging him to make it. The Sauce didn’t flinch. He dribbled three times, looked up at the rim, then spoke to them all at once without ever looking at any of them. “I got this, and you know this, maaaaaan.” Then he shot it. And he missed everything by three feet. He’s our team’s J.R. Smith.

Best Bit of Trash Talking Anyone Had This Week

“Did anyone bring 3-D’s car seat?” — A player, walking onto the team bus before our practice game

Second Place: “It ain’t my fault, coach. It’s nature.” — 3-D, after absorbing a few needles about being too tiny to fit any of the jerseys we had available

First Place: “Coach, remember the drill where I dove after the ball? I think I got swollen lymph nodes from that.” — 3-D, being the best

3-D is a superstar, obviously.

How Did Sportsbooks Do on the BCS Title Game?