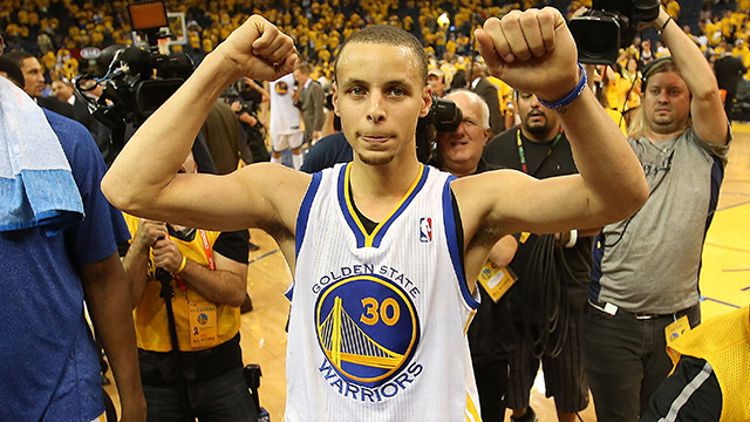 The first hug was for Draymond Green.

As Oracle Arena fogged up with gold confetti, while the Warriors began to celebrate a series-clinching win that they nearly threw away, Green grabbed hold of Mark Jackson and held on for a while. Soon, Jackson would grab Stephen Curry. Earlier in the night, he’d told his young star, “You’re going to take over this game, and then everyone else will follow.” Fourteen third-quarter points later, Curry had proved him right.

As Jackson kept making the rounds, he reached Andrew Bogut. The Aussie had just finished the best game of his short season — 14 points, 21 rebounds, and a defiant, sneering rejection of the Nuggets’ attempt to reclaim the series by going big. As Jackson and Bogut embraced, the 7-footer shouted over the cheers into his coach’s ear: “It’s about time.”

Perhaps you heard — over the last couple days of the Warriors-Nuggets series, there was a lot of talk about physicality. Who’s dirty, who’s soft, who’s trying to influence the refs, who deserves a $25,000 fine. It all got to be so much, that at one point before Game 6, Nuggets coach George Karl was waxing philosophical about the league’s “ass and elbow guys.” By that point, allegations had been volleyed and returned. Wrists had been slapped. The hip-checking and ankle-tweaking mini-controversies had finally run their course.

And so after all that, there we were on Thursday night, watching the three Warriors who have been viewed as soft or injury prone or just plain unlucky all experience moments at the center of attention. First, there was David Lee, he with the supposedly season-ending hip flexor tear, taking the court alongside his able-bodied teammates. The arena rumbled. The reporters on press row collectively Googled “Willis Reed.” Karl, on the Nuggets bench, thought only that it was “weird.” And ultimately, after Lee logged one rebound and one missed field goal in 1:27 of play, the whole thing seemed meaningless.

Then, there was Curry, who, in Jackson’s estimation (or imagination), had been targeted by “hit men” in Game 5. Curry had allegedly been called “soft” by an unnamed (and unoriginal) cohort of shit-talking Nuggets players. In the third quarter he did what, in this series, he has done in third quarters. He lofted 3s whose destinations were foregone conclusions; he whipped passes for easy dunks; he did that thing where he points to the sky. And, ultimately, he gave the Warriors a lead so secure that they couldn’t squander it if they tried. (And in the fourth quarter, did they ever try.)

But the star of the night was Bogut. The same Bogut whose acquisition inspired boos. (These jeers were less about him than about the departed Monta Ellis, but still.) The same Bogut whose ankle injury limited him to 12 games last year and 32 games this year, who suspected his Golden State teammates of thinking, “Why did we trade for this guy?” The same Bogut who called this season “a nightmare,” who spent much of it in training pools and rehab sessions, never believing that a moment like Thursday’s might come. He couldn’t play back-to-backs because of the strain. He couldn’t even drink a beer because of the swelling. But on Thursday at Oracle, he could do whatever he damn well pleased.

“I’d forgotten how good he was,” Karl said of Bogut after the game. Green described his early impressions of Bogut with a nod to his past self: “I saw the things he did in Milwaukee. We knew that once he got back, he could do that here.”

Thursday, he did. His 21 rebounds were more than his three previous games combined. His 14 points were the most he’d scored all year.

And afterward, he made the rounds, hugging teammates, coaches, and even the Warriors’ owner, because on a night when he showed how he’s capable of playing, Bogut earned the right to keep playing some more.