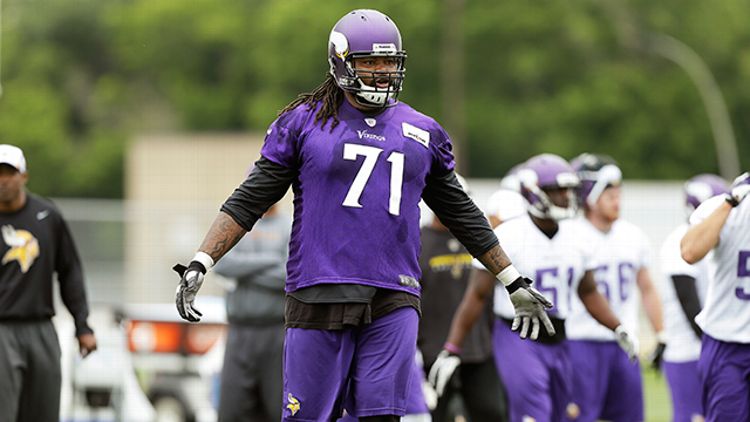 The first thing you notice at Vikings training camp is, of course, Adrian Peterson. No man has ever been adored by another group of people the way that Adrian Peterson is by Vikings fans at camp. It’s one thing for Peterson to get some applause during practice when he’s handed the ball and bursts through the hole in a tackle-free scrimmage, of course, but All Day gets applause, well, all day. The crowd audibly oohed as he came to the front of the line and then ran through a drill. He tossed the ball briefly to his son, Adrian Jr., to the delight of all nearby. (Seriously, this was adorable.) I even saw Adrian Peterson get a steady ovation — like, parade-level applause — for crossing the street and running into the locker-room area before lunch. It was if Paul McCartney showed up at Shea Stadium in 1965, was handed the ball by Joe Namath, and immediately started trucking security guys to make out with every single girl inside the stadium at the same time. That’s how loved Adrian Peterson is in Mankato, Minnesota.

Those fans are in the second-best emotional state a fan can be in, I think. After having just won or being about to win a championship, the second-happiest state for a fan is, “Nobody believed in us and we grossly exceeded expectations.” It doesn’t matter if you yourself were also of little faith. In fact, in a way, it’s better if you had no expectations whatsoever heading into the season and ended up with a playoff season. The Vikings are basically freerolling this season, and you can see it in how happy their fans were just to be at camp. It seemed like nobody left last year with a bad taste in their mouths.

The second thing you notice isn’t quite as expected. It’s Phil Loadholt. Even among a group of human beings almost exclusively chosen for their size, the offensive linemen stand out as the biggest people on the field. And then, even among offensive linemen, the 6-foot-8 Vikings right tackle stands out as the biggest offensive lineman by a noticeable margin. He looks like the bouncer the other bouncers might turn to when they’re having a problem. You see Loadholt and anything seems possible. I imagined lining up behind five Loadholts for a second and, just for a moment, I felt like I could run for 2,000 yards. Then reality set in. I thought I might have pulled a muscle walking from my car onto the field, and Loadholt slipped during a punch drill and knew that he had screwed up. He stuck around for a beat after the drill was over, slowly executing that portion of the drill again like he longed for a second chance.

Loadholt is a mammoth athlete capable of engulfing opposing defensive linemen, but there’s a reason he’s on the right side of the line and not playing the more demanding position of left tackle, and it has to do with pass protection. Loadholt re-signed with the Vikings this offseason, but the difference between the second contract for a very good right tackle (Loadholt) and a very good left tackle (Ryan Clady) is about $15 million in guaranteed money. It’s as if you could see him wistfully reflecting on that limitation as he took that extra rep of the drill.

And then there’s the new guy. Matt Cassel got plenty of reps as the new backup quarterback behind Christian Ponder, and even in the half-speed walkthrough, he looked nothing like the guy who suited up in Kansas City. There, Cassel was tentative, often late with his throws, and limited to the extent that the Chiefs couldn’t even devise a game plan around him with an often-excellent running game. Here, he was smooth and professional. All his throws were on time and on point. Watching tape, I couldn’t be more sure that Matt Cassel isn’t a viable NFL starting quarterback. Watching him in practice, I couldn’t have been any more positive that the opposite was true. I don’t know that he’ll eventually take over for Ponder, nor do I know whether he’ll be any good if he does. But I can understand why you would take a shot on a guy like Cassel and why you would sleep a little easier at night with him as your backup, regardless of whether he actually turns out to be of any consequence.

I wish there was some deep insight to share, some breakout rookie who looked phenomenal on the day, but it’s too early in camp to say that about anybody with any reliability. After Russell Wilson impressed everybody throughout camp and eventually won the job in Seattle last season, there’s been a rush to declare any midround pick or young player as a possible starter if he breaks up a pass or makes a nice catch in camp. That’s cool, and maybe it’ll work out to be that way, but camp is the longest month of the football season for a reason. There’s still a lot to be said and a lot of reps to be taken. This week, Vikings camp was more about celebrating the past than facing the future.

The New Michus: Premier League Strikers That Could Make Noise Outside the Top Four