We Went There: The Kings of L.A. Live 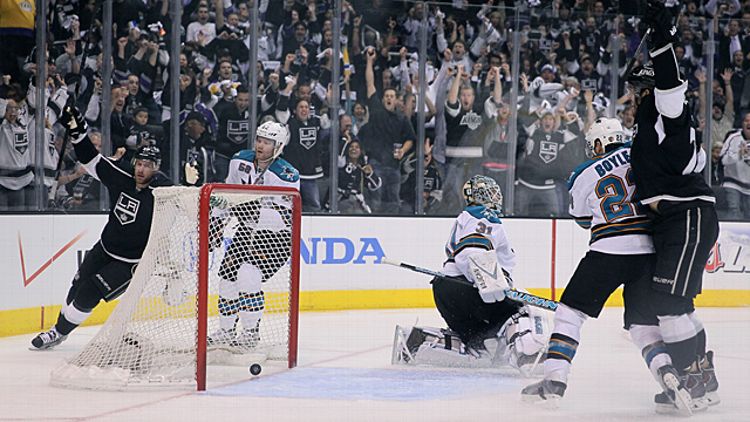 On Thursday night, Barry Derr was reminded in stark metaphorical terms of his place in the entertainment pecking order. Thousands had come to downtown Los Angeles to see the big matchup: Candice versus Kree on American Idol. Barry and a few dissidents had come for Kings versus Sharks, a second-round NHL playoff game. The idols were greeted by a wide red carpet outside the Nokia Theatre, where teleprompters spit out inane questions (“What’s going on down there on the red carpet?”), and entertainment correspondents wore heavy makeup. The Kings had a deejay playing “Sweet Home Alabama.” Someone had strung up balloons. “If you’re born in L.A.,” Barry said, “you gotta fight to see a hockey game.”

You could forgive Kings fans for feeling like members of an out-of-the-way cult. This is partly because their team plays at Staples Center, which is nestled in a vast entertainment complex called L.A. Live and is just steps from the Nokia Theatre. L.A. Live is a place where TV shows are filmed so they can be shown to the West Coast on tape delay. It is also a favored site of movie premieres and VIP visits. Thus, a Kings fan leaving Staples often finds himself encountering Twilight fans who have bivouacked for the premiere, or emissaries from the South Korean presidential delegation. The two groups stare at one another as in a first-contact moment on Star Trek.

I found a Kings fan looking blankly at the Idol red carpet. Did he watch the show? “God, no,” he said. “Absolutely not.”

His name was Ryan Manning. He was taking drags off a cigarette and wearing a double-zero jersey that said DUCKHUNTER on the back. Ryan rolled up his pants to show me the Stanley Cup tattoo he’d gotten after the Kings won the title last season, the first in the team’s 45-year history. The tattoo cost about $250 to $300, Ryan thought. The price was approximate because the tattoo was a gift.

Ryan explained that there were certain peculiarities involved in being a Kings fan. One was that you couldn’t tailgate. L.A. Live had spiffed up the area, adding everything from a reserved-seat movie theater to the Grammy Museum, but it had moved the pregame indoors. Kings supporters met at a nearby Hooters or the ESPN Zone at L.A. Live, where they waited for visiting fans to appear so they could tell them they sucked.

“You suck,” see, is the catchphrase of the Kings fan. Go to a game and you’ll hear it a few thousand times. When is the proper time to say “You suck”? I asked a group of fans.

“When we score the first goal of the game,” Ryan Shafer said.

“When we score or there’s a bad call,” Michael Parker said.

Sean Sly, the third member of the party, looked at his friends incredulously and said, “All the time! Every time I do it it works!”

A second peculiarity of being a King fan is you feel like a visitor at your home arena. “We’re the redheaded stepchild of the Staples Center,” Manning said. The Lakers’ archetypal celebrity fan is Jack Nicholson; the Clippers’ is Billy Crystal; the Kings make due with Matthew Perry, who discussed his show’s cancellation during a first-round game. Multi-sport stadiums may be the future, but they turn their lesser franchises into intruders, like fans who’ve moved down to better seats and are on the lookout for the usher.

Troy Chenchick, who had a smooth, bald head that screamed hockey, mentioned more ways that Kings fans were different from Lakers and Clippers fans. Kings fans don’t leave early. Also: “They’re more rugged.” I found Troy a few feet from one of the entrances to Staples, waiting for a rugged friend to drop him a ticket from the balcony above. After Troy collected the ticket, I yelled up to the friend to ask what he was drinking. “Jack and Coke,” he said. “What is this, the circus?”

Last June, the Kings won the Cup. They got their own title banner at Staples. “There were 500,000 for the parade,” Ryan said. “We were the talk of the town. Everybody was saying, ‘I’m going to Kings games!’ Then there was a lockout.” That effectively let the air out the bandwagon’s tires, and when the Kings started the season 3-7, Angelenos forgot they were the champs.

Playing opposite American Idol was merely the latest indignity. I asked a Kings scalper at 11th and Figueroa how much he could get for an Idol ticket. “Shiiit,” he said, “ain’t no tellin’. It’s American Idol.” But the Kings contraband market was grim. Although the game was announced as a “standing-room sellout,” I walked up to the box office an hour before the game and asked for the best ticket. The cashier sold me one 13 rows from the ice.

“You suck!” everyone else said.

I never managed to find the guy who started that particular “You suck” chant, which he laid on Sharks goalie Antti Niemi for the entire game. One fan described the chant leader as “olive-skinned,” “almost Middle Eastern,” and not a season-ticket holder. The man seemed to exist merely as an idea: He was the collective subconscious of Kings fans.

A Kings game begins with green laser lights cobwebbing the arena. For a moment, you can believe you’ve left the NHL playoffs and paid the $5 cover to enter a border-town discotheque. An announcer says, “Welcome to Staples Center, the entertainment capital of the world!” which only reminded us of the higher-rated entertainment going on next door. Pia Toscano, a former Idol contestant, performed the national anthem. Kings fans screamed during the pauses but so far as I could tell did not scream, “You suck!”

They would have plenty of chances. The Kings played the theme from The Addams Family and the crowd said, “Sharks suck!” With the Kings up 1-0, I moved across the ice for the second period and found myself sitting in front of a family of four.

It was like Harvey Pekar’s idea of a Mother’s Day card. But it reminded me that a smaller, hard-core fan base has its advantages. The crowd at Staples for a Kings game is a fairly accurate cross section of Kings fandom; the crowd for a Lakers game is an accurate cross section of American Express black-card holders. “People want to be seen at Lakers games,” Manning had told me. “People want to be at Kings games.”

The Kings went up 2-0 on a Drew Doughty goal (“Hey, Niemi!”), but the Sharks scored two quick ones and tied the game. I heard a commotion behind me and turned to find two Sharks fans covered in beer. A pair of Kings fans, an apparent husband-and-wife team who looked extremely rugged, were leering at them from two rows up.

The Sharks fans called themselves Adam and Emiliano. “They were talking a bunch of shit to the San Jose fans,” Adam recounted later, “and then, boom-boom, it’s tied. They don’t handle it well. They threw beer on us.”

Emiliano, who had drank more beer than had been thrown on him, said, “That’s already happened!”

Adam ignored that. “The third period is going to be great,” he said.

“I’m not,” Emiliano said. “I’m uncomfortable.” They returned to their seats to face the wrath of Kings fans.

I went back to Section 115. With less than two minutes left, the Kings were down a goal when they found themselves with a 5-on-3 power play, which came when Marc-Edouard Vlasic inexplicably chucked the puck into the crowd. (Vlasic said it deflected off Jeff Carter.) It was the Kings’ turn to go boom-boom. Dustin Brown scored a goal. (“Ni-em-i!”) Trevor Lewis scored another. (“Ni-em-i!”) The game had been tied and won in 22 seconds.

Kings fans marched madly out of Staples and into the L.A. Live plaza. They acted like they owned the place. They surrounded Colin Fraser when he made his way to the postgame show; they screamed, “Fuck you, Seacrest!”; they video-bombed the correspondents who were reporting on American Idol; and they retweeted Matthew Perry. I saw a woman ask her significant other, in weepy and insistent terms, to confirm she’d just seen one of the greatest games of her life. She had. Keep your Lakers tickets. On this night, being a Kings fan did not suck.

Q&A: Russell Martin on the Art of Pitch Framing