We Went There: The 1997 NBA Finals, Live From Pyongyang 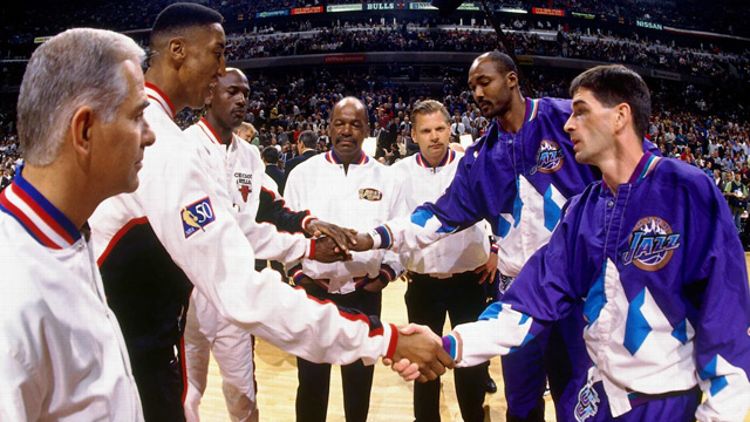 North Korean basketball enthusiasts have long remained anonymous, as their sport flew as far under the radar as most other objects in North Korea. But their modified rules can enhance the sport — if you tried to play a game of pickup ball in downtown Pyongyang, here’s what you’d need to know:

What if the world’s greatest players competed under these rules? If we could only imagine …

The year is 1997. Dennis Rodman, famed international peace agent and part-time basketball professional, has brought friendship across the Pacific Ocean, repairing relations between the United States and the Democratic People’s Republic of Korea. As a gesture of goodwill, Rodman negotiates for the NBA Finals to be played on North Korean soil, under North Korean rules. Carried by his iron resolve, Rodman’s Chicago Bulls team navigates its way through the Eastern Conference and into the championship series against the Utah Jazz. Game 1 is set for June 1, live from Pyongyang. Run it, Tesh.

12:00 The Jong clan has built a perfect replica of the United Center in the middle of Pyongyang for the occasion, but the fans in the seats look decidedly not Korean. This is not a new phenomenon.

6:56 Off a nice pocket pass from Stockton, Greg Ostertag rises up for a 3-point jam … and flings the ball straight up into the air. Ogre-tag catches his own blunder, then bricks a jumper. Solid possession.

5:40 The Mailman and His Airness go brick-for-brick, ensuring no one takes advantage of North Korean rules; 8-8 early on.

0:02.9 Our first moment of controversy! As the quarter winds down, Howard Eisley of the Jazz hits a fade-away jumper that just appears to leave his hand with under three seconds left on the clock. The refs agree, counting it for eight, and the buzzer sounds. Michael Jordan is incensed — no review, zebras? I need my rings, damn it! His appeals go unheard, and the Jazz finish the quarter with a flourish, taking a 24-17 lead.

11:40 Utah keeps the pressure on the Bulls with another three points on a Greg Foster two-handed flush. The Jazz have their largest lead of the game to this point, 27-17.

8:49 That was fast. After trading buckets, a four-point swish from Kukoc and a missed John Stockton free throw have cut the deficit to five. Stockton recovers and hits the second. Utah 29, Chicago 23.

3:02 The crowd rises in appreciation as Hero Rodman steps to the free-throw line, lights gleaming off the multicolored streaks in his hair. The first one’s up, and, well, it’s an air ball. “Whoa!” exclaims Marv Albert.

3:02 Rodman clangs the second and costs his team two points off that pair of misses. Good thing his diplomacy skills put him beyond reproach. 42-32 Jazz.

0:35 Jordan clangs a jumper, but Rodman bats the rebound to himself and promptly fires up a 3-ball … which isn’t close. Pippen grabs the loose ball and puts in an uncontested layup. “The Jazz falling asleep, I think dulled beyond belief that Dennis took that 3-point shot,” gushes Bill Walton. Dulling opponents beyond belief is one of Rodman’s many under-recognized talents — years later, stat heads will marvel at his all-time great DOBB.

0:05.5 The shot clock prevents Utah from attempting an 8, but a near swish-4 from Bryon Russell pushes its lead to 49-38. Pippen misses a potential 8-pointer of his own, and the halftime buzzer sounds. The Bulls head to the locker room down 11. The DMZ is put on alert as Jordan’s rage is audible in Seoul.

10:32 Off a Bulls backcourt turnover, Stockton dishes to Ostertag, alone under the basket, and the ball deflects off his hand and out of bounds. Ostertag betrays no emotion.

7:37 Pippen with seven quick points on a swish-4 and transition dunk, but Malone responds with a thunderous one-hander, putting the Jazz back up by nine, 56-47.

0:00.5 … 8-pointer! Eisley is stripped on one end, and Pippen catches the outlet pass and lays it in with under a second remaining. The Bulls pull to within four heading into the fourth.

1:11 To this point, the Bulls have ground out the final period with a series of yawn-2s and have pulled within three points at 87-84. Off a Jordan miss, Ron Harper grabs the offensive board and kicks out to Pippen, who splashes a 4, giving the Bulls their first lead since 18-16.

0:35 An incredibly soft foul on Hornacek puts MJ at the line with a chance to tie it up.

0:35 The second is up and … off the back rim! Withered by the pressure, Jordan costs his team a point, and the Bulls are down by two once more.

0:09 Stockton misses a 3, but Malone corrals the loose ball and is fouled by Rodman. Malone now goes to the line for two. If he hits both, only a swish-4 or an 8-pointer can save the Bulls. Even making just one of two leaves the Jazz in good shape, still up by two.

0:09 The first one rims out. Bulls down one. Pippen lingers beside Malone at the line. “The Mailman doesn’t deliver on Sundays, Karl,” he whispers.

0:09 And the second free throw rattles out! The game is now tied at 88, and unless the Jazz can pull this out in overtime, Malone stands to be a historic goat. Bulls timeout.

0:05 Out of the timeout, Jordan receives the ball at the 3-point line, guarded by Bryon Russell.

0:01 He crosses over to his left and releases …

0:00 And the Great 8 goes down! Jordan walks away, his face stoic, fist pumped. The noise is deafening. Mobs of American-looking Koreans wash over the floor. Kim Jong-il prostrates himself and drops his nuclear codes at Rodman’s feet.

This, this is what basketball can do for the world.

Ironically, Rodman was hurt the worst by North Korean rules, costing his team two points from the free-throw line and making only two of his seven attempts from the field, none of which were dunks or 4-pointers. Pippen demonstrated his ability to thrive under autocracy, recording 37 points on 19 shot attempts and only two trips to the charity stripe for a true shooting percentage of 93 percent.

One can’t help but draw similarities between this game and Jordan’s other basketball trip into another galaxy, documented by the feature film Space Jam. Three-point dunks, a troll-like dictator … and hell, Moron Mountain seems like a pretty apt description of Pyongyang.

About Last Night: Fear the Bulldog