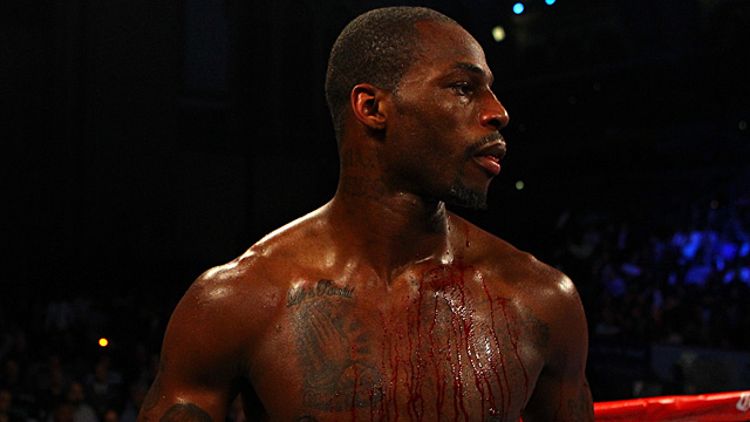 There’s wasn’t much overlap between Willie Pep’s years of lucidity and the age of Google. But it would have warmed the heart of arguably the greatest defensive fighter in boxing history to know that the second suggestion offered when you type his name into the search engine, trailing only “Willie Pep boxer,” is “Willie Pep no punch round.” Long after his career was over, the former featherweight champ still delighted in telling the tale of the night he won a round without throwing a punch. It was probably an urban legend, or at the very least some liberal truth calisthenics. But it was a point of beaming pride for Pep just the same.

It’s a good thing Pep fought in the era in which he did, because had he tried to pull that no-punch stunt in 2012, he would have been booed incessantly by the live crowd for the final two minutes and 30 seconds of the round, yelled at by some officious referee to let his hands go, and vaporized the next day by a cadre of blue-balled boxing bloggers. Here’s the prevailing audience attitude in the modern fight game: If you want to demonstrate your craft and outbox a guy, do it on your own time; the time we share is to be spent with you giving and taking punches for my viewing pleasure.

That’s not to say that in Pep’s heyday fight fans preferred his technical proficiency over the violence and drama guaranteed by, say, Rocky Graziano. And it’s not to say that nowadays anything short of Arturo Gatti vs. Micky Ward is death at the box office. But an appreciation for the beauty of what Pep and his ilk could do is certainly on the wane and has been for decades. And now boxers like Andre Ward and Chad Dawson are paying the price, in the form of criticism for having the audacity to test their considerable skills against one another.

Light heavyweight king Dawson and super middleweight champ Ward are your classic practitioners of the Sweet Science who fail to excite (though with Dawson, that reputation might be unfairly exaggerated — more on that in a bit). Their clash at the Oracle Arena in Oakland this Saturday night is as four-star as it gets. You have the legitimate champs of two adjacent divisions, both on or within sniffing distance of the pound-for-pound lists, both agreeing without hesitation to take the toughest possible fight. Yet anticipation is lukewarm. And in some corners of the boxing universe, you’ll even find HBO criticized for wasting some percentage of its annual boxing budget on two combatants who are all substance, no style.

Fans are not necessarily wrong to brace for a low-contact affair. But at the same time, decades ago, bouts with an intellectual appeal — battles that were more intriguing than invigorating — were appreciated more. If there’s a line of demarcation, perhaps it’s the late-’80s rise of Mike Tyson. At a time when MTV’s hit shows were all four minutes long, Tyson provided short-attention-span satisfaction for a new generation of boxing viewers. It was easy to become a Mike Tyson fan without necessarily becoming a true boxing fan.

Of course, pre-Tyson, there were boring fights that got booed, and post-Tyson, there are safety-first boxers who put asses in seats (such as the number-one draw in pay-per-view, Floyd Mayweather). But in general, appreciation for the finer points of boxing has steadily receded. And in fairness, that’s true of almost every form of entertainment. Thirty years ago, you had five or six channels on your TV so you watched a fight for the simple reason that it was what was on. Now, if you’re watching a fight, you’re consciously choosing it over 500 alternatives. And Ward vs. Dawson isn’t the kind of matchup that everyone consciously chooses.

To label the 30-year-old Dawson a boring fighter is to have a somewhat selective memory. Sure, he’s a long southpaw who prefers to fight on the outside, all harbingers of a likely stink-out artist. But his two fights with pressurizing Glen Johnson were plenty action-packed, and his bouts with Antonio Tarver, Tomasz Adamek, and Jean Pascal all had their moments. There’s a tendency to undersell Dawson’s entertainment value right now because the last two times we saw him, he was sharing the ring with Bernard Hopkins. That’s like judging Boyz II Men’s music based on how Charles Barkley sings it.

The more problematic side of the equation is Ward. He’s the kind of fighter whose top priority in the ring is to negate, to make sure the other guy can’t do any of the things he wants to do. I know I’m in the great minority here, but I actually enjoy watching the 28-year-old Ward work his action-snuffing magic. There’s something appealing about his cerebral domination of very good fighters. It’s like watching Jamie Moyer junk-ball his way to a no-hitter; it’s a stream of ugliness that adds up to something mesmerizing.

Unfortunately, that’s as positive a spin as you’ll see any fan or writer put on Ward. Many speak of his in-ring stylings as though he’s a direct descendent of John Ruiz. At best, he’s boxing’s equivalent to the Tim Duncan–led Spurs teams, which were calculatingly efficient and generated mass apathy every time they reached the NBA finals. If you’re informed enough about the subtleties of basketball, if a backdoor cut titillates you the way a 360 dunk does the common man, you could at least appreciate the Spurs. Likewise in boxing, if your eyes have been trained to follow not just the gloves but the shoulders and the hips and the feet, there’s a greater chance that you might appreciate Andre Ward. I’m not a big MMA fan, and I recognize that that’s partially because, when two guys are rolling around on the mat, all I see is two guys rolling around on the mat. It’s hard to be engaged by any sport’s slower moments if you don’t understand what the competitors are trying to accomplish strategically in those moments.

It also doesn’t help if the fighters in question can’t articulate a reason their fight might be exciting. I recently asked Dawson why people should expect his bout with Ward to be entertaining, and he responded, “You got two world champions, two guys who have been in with the best guys in the world in their divisions. I don’t know how people think this would be a boring fight when you’ve got two young guys — neither one of us had to take this fight, and I think that says a lot for both of us, that we both took this fight at this stage in our career. So the fact that this fight was made so easily and neither one of us strayed away from it, I think the fans need to open their eyes and see that this is a real fight, two young, strong, talented guys. The name of the fight is ‘Made In America.’ We’re both Americans and we’re both looking to go out there and make history on September 8.”

Every word of that answer is valid. But none of it actually addresses the question.

Boxing fans and writers are forever locked in a debate over what the executives at HBO and Showtime should favor: exciting style pairings or meaningful matchups. It would be wonderful if every fight could be Hagler-Hearns, a pound-for-pound showdown in which jabs were checked at the door and we got one of the most riveting brawls of all-time. But realistically, one or the other, skills or thrills, should be satisfactory. There’s no rule that a movie theater showing The Artist can’t have Fast Five on the next screen. Some fights are slow-burning masterpieces, and others play like a pile-up of gratuitous action sequences. There should be room on the broadcast schedules for both. The co-featured bout to Ward-Dawson matches offense-minded lightweights Antonio DeMarco and John Molina. That’s a smart programming hedge by HBO.

Whether the main event ends up providing bone-crunching drama or not, as long as hometown favorite Ward wins, the Oakland crowd will go home happy. Ward is an attraction there, having drawn more than 10,000 fans at Oracle for his 2009 fight against Mikkel Kessler. He puts up respectable, if not staggering, numbers.

On paper, Ward is marketable — a clean-cut, well-spoken guy, the last American Olympic boxing gold medalist, a fighter who hasn’t lost since he was 12 years old. He has superstar qualities. But can he become an actual superstar with his fighting style? Especially in an age when defense and subtlety aren’t as acceptable to the masses as they used to be?

With Michael Buffer in Moscow on Saturday for the Vitali Klitschko–Manuel Charr fight, ring announcing duties for Ward-Dawson fall upon one Nick Cannon, best known as the host of America’s Got Talent. Ward vs. Dawson will serve as evidence that, yes, America’s still got some boxing talent. Whether the American public cares to see that talent on display is another issue altogether.

We Went There: The Hoosiers Gym