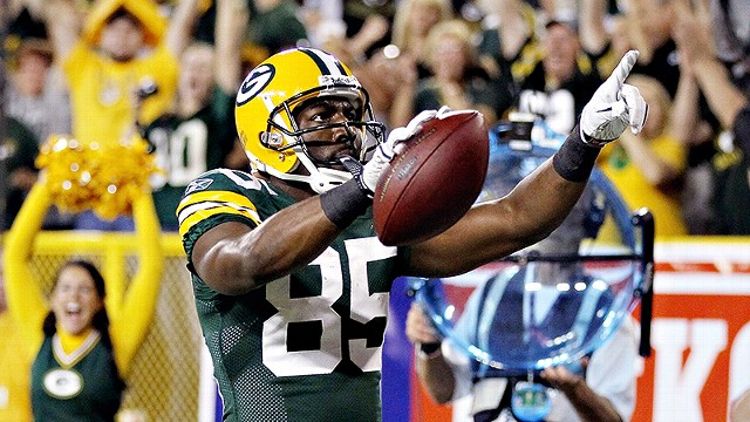 On Friday, Greg Jennings accepted an offer from the Minnesota Vikings that could pay him as much as $47.5 million over the next five years, with $18 million in guaranteed money. As a Packers fan, I feel 20 percent sad and 80 percent indifferent about this. I’ll always remember Greg Jennings as the best receiver of Aaron Rodgers’s early years. He was to no. 12 what Sterling Sharpe was to Brett Favre — or (for you non-Packers fans) what David Caruso was to NYPD Blue or Paul Di’Anno was to Iron Maiden. In seven seasons, Jennings caught 425 passes for 6,537 yards and 53 touchdowns. The bulk of that production occurred from 2007 to 2010, the period when the Packers transitioned from Favre to Rodgers and ended up winning their fourth Super Bowl. Jennings was a pivotal player in that process; as Ted Thompson put it over the weekend with typical samurai terseness, Jennings was a “Good man. Good player.”

Alas, I come not to praise the Packer Greg Jennings was but to bury the Viking he is now. He was arguably the fourth-best guy in a stacked receiving squad last season, behind Jordy Nelson, James Jones, and the ascendant Randall Cobb. He hasn’t been healthy lately, missing 11 out of his past 22 games. And it was widely assumed that he’d been leaving anyway; Rodgers was already reminiscing back in September about the favorite deep balls thrown to his onetime go-to big-play threat. The most important contribution Jennings made to the Packers lately was not re-signing before the 2012 season, when he could’ve reportedly made $11 million per year, and instead milking the desperate Vikings, the league’s second-worst passing team (just ahead of the Chiefs) last year. Jennings freed up cap space for the Packers and forced a hated divisional opponent to overpay. What a generous parting gift!

In the cutthroat parlance of the NFL, Jennings had outlived his usefulness as a Packer — which, in accordance with recent history, made it inevitable that he’d end up as a Viking. I know the Packers are saying they wanted Jennings back, though not enough to offer the $9 million per year the Vikings paid up. (The Packers topped out at an annual average of $8 million, which still seems high.) But I wonder if the Packers are merely playing their usual role in an ongoing drama between the Don Draper and Ted Chaough of the NFC North. On Mad Men, Chaough is the would-be rival to the eternally more successful Draper, constantly hiring away Draper’s cast-offs in a futile effort to be Draper. Favre is the most egregious example, of course. (Which makes him Peggy Olson in this scenario, I suppose.) There have been others: Darren Sharper, Ryan Longwell, and Robert Ferguson signed as free agents in the mid-’00s. Others, like Javon Walker, Bryce Paup, and Paul Coffman, matriculated to the Vikings eventually. And don’t forget players like William Henderson and Aaron Kampman who were courted by the Vikes, unsuccessfully. The only way this story line remains plausible is for the Packers to at least act disappointed, so the Vikings (and their fans) can feel like they’ve gained something.

It’s true that the serial poaching of our players by the Vikings has been endlessly annoying for Packers fans over the years, though the Favre debacle sort of inoculated me against caring too much about this Jennings thing (and all future purple Packer eating) one way or the other. I might’ve felt differently if Favre hadn’t thrown that pick at the end of the 2010 NFC Championship Game against the Saints, which prevented fellow ex-Packer Ryan Longwell from kicking the game-winning field goal and putting the Vikings in their first Super Bowl since the mid-’70s. Thank sweet Jesus in heaven that Packers play like Vikings when they leave the Packers for the Vikings.

And so it goes for Jennings, who goes from playing with two of the greatest quarterbacks of all time to playing with Christian Ponder and a receiving corps composed of Jarius Wright, Jerome Simpson, a lukewarm Hot Pocket, and a broomstick wearing an Anthony Carter jersey. (I might have the depth chart slightly out of order there.) With Percy Harvin gone, Jennings is under even greater pressure to be the dominant offensive presence he no longer seems capable of being. But don’t fret, Vikings fans: Maybe you can sign Randall Cobb in another two years.