Victor Victoria: The Return of the Inimitable, Deafening, and Delightful Azarenka 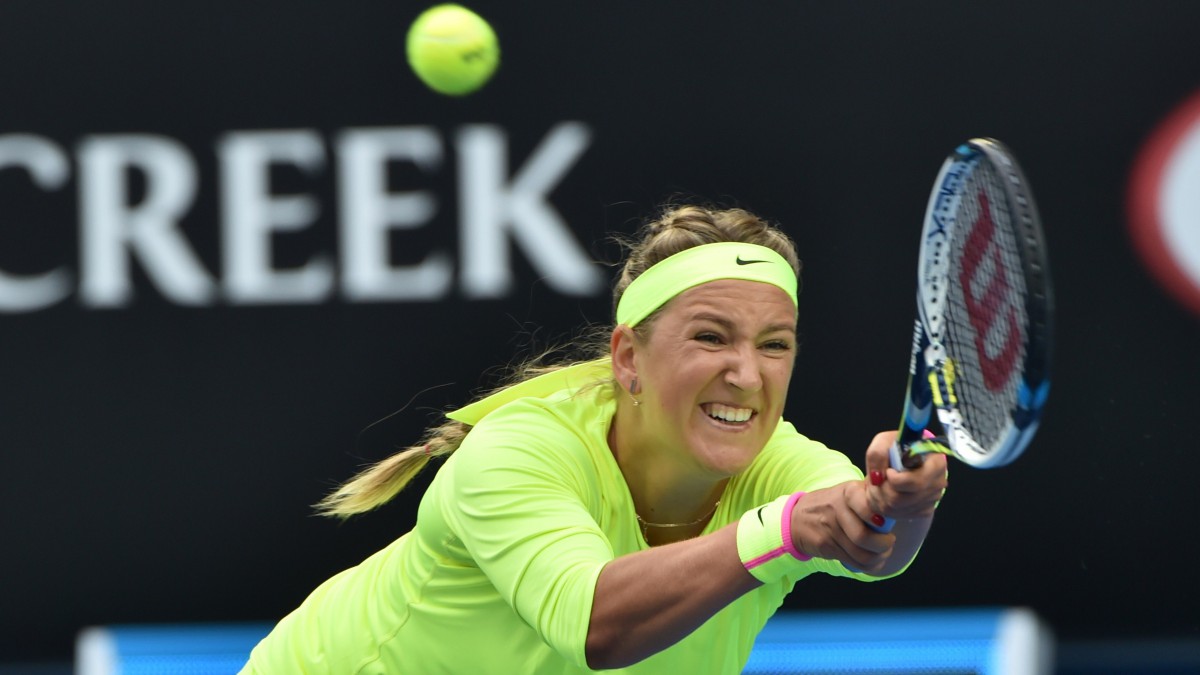 Victoria Azarenka has an astonishing scream. Should we talk about that? Should we try to get specific? Women’s tennis, as you probably know, is a profession in which killer screams are not exactly upside-down airplane stamps in terms of scarcity. There are matches where piercing beams of sound outnumber backhands. If you are a champagne flute, or a self-righteous tennis columnist, the third row of any WTA event is pretty much the last place you should ever hope to find yourself. You might shatter into a million pieces, and I’m sure something bad would also happen to the champagne flute.

Even in this rarefied scream world, though, Azarenka’s scream is special. When she strikes the ball, she sounds like a ghost going down a waterslide. She sounds a little like the lasers fired by Imperial AT-AT Walkers during the assault on Hoth. To me, during a long rally, she sounds like a conveyor belt transporting a series of stately princesses into a running jet engine. She sounds superhumanly warped. Close your eyes, and if the rhythm of the groundstrokes gets regular enough, you won’t be able to tell whether a tennis match is happening or an Aphex Twin track is about to break out.

People complain about this; Azarenka is one of the driving reasons behind the WTA’s current crusade to stamp out “grunting” (your weird tennisland euphemism for “crazed shrieking”) in the next generation of players. Personally, I like the shrieks, or at least I like them more than I like the harrumphing about them, which tends to press itself right up against the glass of the word “unladylike.” Distracting, writers will call it. Unpleasant. Whatever you say, Cecil; sorry that sports put ripples in your tea.

The thing is, tennis basically duplicates the dynamic of every high school math class. Male players spend their entire careers, from toddlerhood forward, being praised for aggression and power. Female players are expected to win, but they’re also bombarded with not-super-subtle social cues telling them to be unthreatening, attractive, and approachable. If you don’t think that’s true, tell me again why Maria Sharapova1 makes more endorsement money than Serena Williams? Their relationships are criticized. Their love lives are scrutinized. Their fashion choices are looked into at press conferences. Some of them are adept at turning this state of affairs into bankable celebrity; some aren’t. But on the court, they are playing an intense and difficult high-stakes game in which being marriageable in a Jane Austen sense is worth exactly love (and not the fun kind). Historically, tennis values gentility for its own sake but has to be sold on equality on a case-by-case basis. If making noise helps you hit the ball harder, I say it’s up to the Earl of Fotheringdale’s eardrums to keep up. Slaughter the invisible princesses.

This is especially true in the case of Azarenka, a fascinating oddball of a player whose entire career has been about coming to grips with the power of her own game. From a certain angle, you could even say it’s been about figuring out how to be herself within tennis. How to express herself. When she first came on to the scene, a Belarusian-by-way-of-Arizona phenom who played big but inconsistent tennis, I think there was a tendency to see her as a sort of Sharapova-in-waiting. She was pretty, blonde, and seemingly marketable, fiery but self-possessed. When she won her first major, the New York Times praised her “personality and good looks.” Her game was more flexible than Maria’s. She served hard, defended doggedly, and (unlike Sharapova) had the speed to run down shots. She had a point-killing forehand to go along with the Platonic ideal of the grinder’s backhand that was ubiquitous in women’s tennis. But when people asked whether she was on her way to superstardom, the future that shimmered in the question seemed to have mascara ads in it, not just Grand Slam championships.

As she got her game more and more under control — she first hit no. 1 after crushing Sharapova in the 2012 Australian Open final — she spent more time in the public eye. And she turned out to be weirder than anyone expected, harder to read. She dated a celebrity, which, OK, nothing strange about that — but the celebrity she dated was Redfoo, the electro-pop rapper-producer from LMFAO, who showed up at her matches under giant fronds of Sideshow Bob hair, wearing massive novelty eyeglasses. Redfoo is the son of Berry Gordy Jr., the founder of Motown Records, which was awesomely context-destabilizing; Azarenka was a 23-year-old tennis player from Eastern Europe, but maybe she was secretly hanging out with the Vandellas? She would show up at, like, Knicks games in a leopard-print vest and fingerless biker gloves. She would crimp her hair out into a pale fantail and go to awards shows wearing Redfoo’s glasses. There was nothing at all edgy or off-putting about this; it was just not behavior tied to an image or branding strategy. Rather than saying, Here is a coherent vision of the identity-concepts I represent, she was communicating something like, This feels fun to me at this moment. In the pro-sports media grammar of 2015, she might as well have been speaking Dothraki.

It wasn’t that Azarenka wasn’t liked by tennis fans, or even that she was misunderstood in an especially fraught way. She simply seemed to occupy an increasingly separate universe, from whose unglimpsed skies she would periodically drop in to play tennis. She was a howling terror on the court throughout 2012 and 2013, winning the Australian Open both years and losing to Serena Williams both years in the U.S. Open final. If she never quite broke through into outright dominance, it was mostly because she never developed the weapons to challenge Serena; this, of course, during a period when the world’s combined nuclear arsenal might not have been enough to challenge Serena.2 Still, there were tournaments where you’d say, If anyone can push Serena, it will be her. So it was sad, a little, that as she became more central to the on-court action in more tournaments, fans stopped talking about her as the future face of women’s tennis and started talking about her as that nice girl who seemed a little … you know?

Then, last year, she hurt her foot, missed tournament after tournament, and spiraled way, way down in the rankings (she’s currently no. 44). She also broke up with Redfoo. And so began Victoria Azarenka’s season in the wilderness, a time when she was virtually invisible both on and off the court — and yet, amazingly, a time when everything about her seemed to both settle and intensify. She commiserated with a heartbroken Caroline Wozniacki in Monaco. She took up painting, which:

She got into graffiti art, leading to both this tweet:

And this photo op: When reporters pressed her to talk about her “suffering” as a result of her injury exile, she extemporized a lost-at-sea micro-novel back at them: “You’re making it sound like I almost died and there was 10 sharks and I got attacked and I survived. And, you know, I saved a dolphin, as well.”

I saved a dolphin, as well! She was mocked for this diatribe on (guess where) the Internet. But it’s kind of great, isn’t it? Winning tennis matches might have made her less central to tennis, but you get the feeling that disappearing from tennis for a while has made her more centered in herself. Now she’s back, playing in the Australian Open as an unseeded afterthought. She’s playing phenomenally well for someone who’s barely had a competitive match in a year.3 Earlier this week, she rolled the eighth-seeded Wozniacki 6-4, 6-2 in what, given the lopsided score, was a deceptively high-level match. Next up, she plays the 25th-seeded Czech Barbora Zahlavova Strycova, to whom she’s never lost a set.

She’s already had her first delightfully off-script press conference moment. She got asked a generic question about her comeback, started giving a generic answer, and then interrupted herself to ask a journalist who often comments on her clothes for an opinion on her outfit. Actually, it’s worth quoting the exchange, because it’s wonderful.

Q. How pleased are you with finding your range back again?

VICTORIA AZARENKA: I think it was a very good match, very high quality. I’m happy with the way I stayed consistent throughout the whole match. I think there’s always things you can improve, but it’s a great progress from one match to another. I just want to keep trying to stay in that path and continue to grow, continue to improve. But I missed you so much. You didn’t come to my last press conference. I have a question for you.

Q. You have a question for me?

VICTORIA AZARENKA: Yes. Over the last couple years you had a lot of comments on fashion. I wanted to hear your thoughts because you haven’t tweeted about it.

Q. About your outfit?

VICTORIA AZARENKA: Everybody’s. You have fashion sense, so I’m curious.

Q. I like Serena’s the most this year. I think she won this tournament fashion-wise.

Q. Maria is good. I like yours. The long sleeves I’m not so sure about.

VICTORIA AZARENKA: You think I should take off the long sleeves?

VICTORIA AZARENKA: A lot of yellow color. I appreciate it.

Q: You were talking about fashion. Do you care at all about the image, what people are going to say about the way you behave or what you wear? Is that something you look at or you don’t care?

VICTORIA AZARENKA: Well, I got to wear what I have, so … But I think the importance is to stay true to who you are, what you believe in. As long as you’re being respectful to others, you know, to everybody. You can be the most ripest and beautiful peach there is, but you’ll still find somebody who hates peaches, so what are you going to do, right (smiling)?

What are you going to do? If you’re Sharapova — if you’re a lot of athletes, of both genders — you’re going to subtly tone down your peachiness while presenting yourself as a sort of amorphous pan-fruit entity onto which your fans can project their own desires. That’s not a bad decision, necessarily, for someone who has to live in the world. It’s a realist’s decision, and it’s understandable. If you’re Azarenka, though? You’re going to be a peach. You’re going to be yourself, as loudly as you want to be. My wish for her is sentimental, but here it is: May she stay true to the person she feels herself becoming. And may all her press transcripts end with (smiling).